It is the time of the year again, when Singapore will hold its iconic Grand Prix under the stars at the Marina Bay Street Circuit. During last year’s edition of the night race, we did a similar Throwback Sundays article on watches with a racing theme. This year, we are looking at the bigger picture – automotive as a whole. For this article, we select six timepieces from our archives that have an automotive theme.

So, without any further ado, let’s flag off! The Breitling for Bentley GMT B04 S Carbon. The red accent, as well as the use of carbon fibre, gives the watch some racing pedigree.

We kick off the article with one of the biggest names in automobile: Bentley. For the longest time, Bentley has been the pinnacle of automotive, be it in terms of the design or performance. It is no secret that their cars are desired by many.

However, for the horological enthusiast, not all hope is lost. Bentley and Breitling have been collaborating to produce some pretty exotic and great timepieces over the years, and the Bentley GMT B04 S Carbon is one of their latest novelties. Cased in carbon, the 45mm matte black timepiece gives off a rather stealthy appearance. Together with the carbon fibre dial and red rings around the sub-dials, the watch shows off its racing pedigree.

The watch is powered by Breitling’s Calibre B04, a self-winding movement that features both the chronograph and a date indicator. A red hand displays the home time in 24 hours’ format, as well as a rotating inner bezel that indicates the time in various cities around the world. Priced at S$31,280, this is one of the more expensive Breitling offerings. but for the die hard Bentley and Breitling enthusiasts, the Bentley GMT B04 S Carbon is an excellent choice. 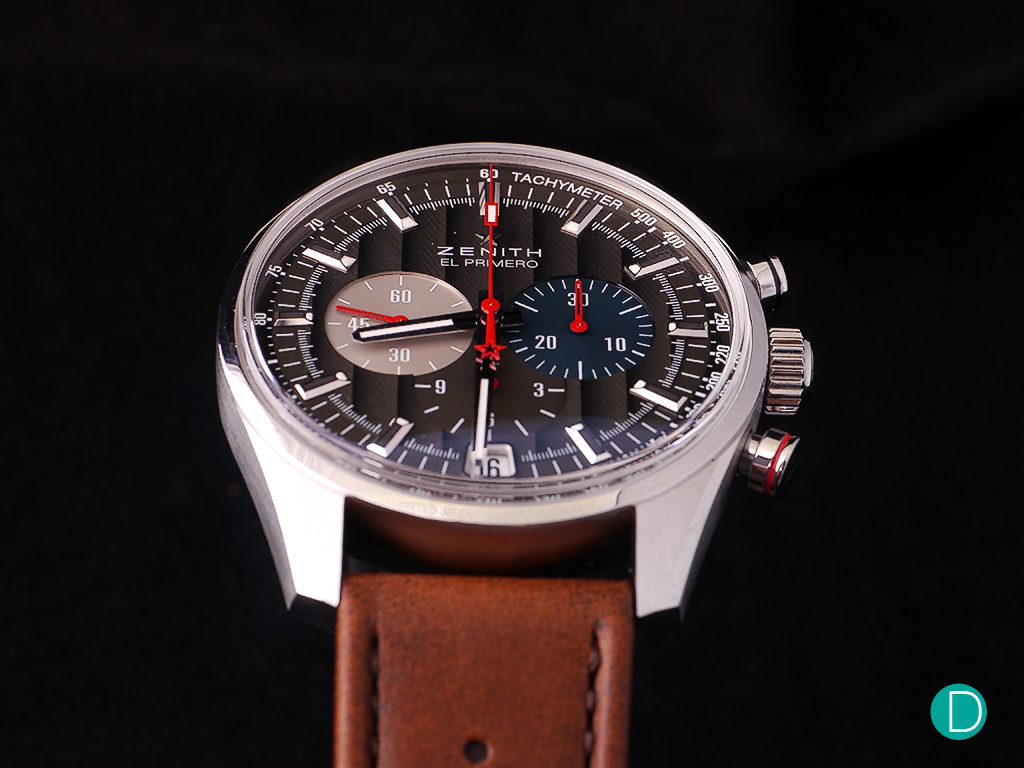 The El Primero is undoubtedly one of the most definitive chronographs in the 60s. Early versions are stunning with their tri-colour sub-dial and hailed as being the first fully-integrated automatic chronograph. Many decades later, the El Primero is still a benchmark for many chronographs, with its high-beat movement and excellent construction.

This year, Zenith launched a new model for the El Primero collection named the Classic Car. The watch features all the classic cues from the usual El Primero, with a slight twist. One of the greatest highlights is the dial, in which it seems to have feature the Côtes de Genève motif on a stunning anthracite canvass. Interestingly, Zenith calls it the “Brushed Engine” dial. We think that it gives the watch a rather refreshing effect, and the colour combination between the different elements on the dial work rather beautifully.

Paired with a perforated brown calfskin leather strap, as well as stripped colour pushers and red needles, the Classic Car has certainly added a new dimension to the El Primero collection. The 42mm timepiece is also fitted with the automatic high-beat El Primero 400B movement, which features a date indicator and a power reserve of approximately 50 hours. Priced at US$6,700 (around S$9,166), this is certainly a timepiece for someone who wants an excellent chronograph with a great provenance and wonderful aesthetics. A close-up of the Mille Miglia 2016 XL Race Edition.

The Mille Miglia is one of the most highly-anticipated classic/vintage car races in the calendar year, in which the road rally event is held annually along the scenic routes of Rome and Brescia. The race is currently in its 39th edition, following its new format after it was revived in 1977 due to a hiatus over safety issues in the past.

Since 1988, Chopard has been the official partner and timekeeper for this endurance rally. This is all thanks to Karl-Friedrich Scheufele, the Co-President of Chopard, who has a strong passion for classic cars and motor racing. Over the years, the manufacturer have produced some rather impressive pieces under the “Mille Miglia” collection, which combines style and performance. The Mille Miglia 2016 XL Race Edition is one of the latest pieces that was launched this year, and is representative of the collection. With a large case diameter of 46mm, it features a rather aesthetically-pleasing design, and it is fitted with the in-house Calibre 03.05-C. The movement is COSC-certified, and it offers a power reserve of approximately 60 hours. The finishing is done rather nicely too.

The Mille Miglia 2016 XL Race Edition is fitted with a brown “Suportlo” calfskin strap, which gives it a weathered look. In all, we think that this is a rather nice timepiece, and one that is attractive to both automotive and non-automotive collectors alike. The watch retails at S$14,060, and it will be limited to just a production of 1,000 pieces. When it comes to motor-racing, TAG Heuer is probably one of the first watch manufacturers that comes to mind. It is no surprise, considering that their collections are rather sporty and that most of their watches have strong links to motor sports. Well, it was also helps its race cool cred as luminaries like Steve McQueen, and (former) F1 drivers such Niki Lauda and Gilles Villeneuve, are seen rocking with Heuer watches!

Recently, the Carrera collection was in focus, notably for the Carrera Heuer-02T was in the limelight. Touted as the most affordable “Swiss-made” Tourbillon watch, it stands proud next to its sibling – the Heuer 01 Chronograph. The Chronograph has a rather cool open-worked dial and a stylish case design. The 45mm steel piece is finished in a variety of case finishing/materials, with some of the components being coated with black brushed titanium carbide. The combination, together with the red accents, makes the timepiece look the part of being sporty and attractive.

Priced at a relatively modest tag of S$7,800, it is definitely a nice watch to add to the collection. For the seasoned collector and also for the non-watch collector. After all, many of us actually began our humble collection with a TAG Heuer watch. MB&F HMX. Does the watch remind you of anything?

MB&F. The brainchild behind some of the most outrageous and unusual timepieces that we have ever seen, Maximillian Busser and his team have never ceased to amaze us with their creations.

The HMX is one of the pieces from the highly-acclaimed Horological Machines (HM) collection, which the atelier aims to push the boundaries in aesthetics and visual complications. Based loosely on the HM5, the HMX features a sleek and contemporary case design, with a transparent sapphire crystal at the top that resembles an open engine cover. The Black Badger edition, interestingly, comes with machined piece of AGT Ultra luminous material in each of the rocker covers which adds a rather neat touch to the watch. Additionally, the watch also features a jumping hour mechanism, which is display vertically via a built-in prism. The design is inspired by watches in the 70s, such as the Amida Digitrend and the Girard-Perregaux Casquette. Also, thanks to the positioning of the time indicators, both the HM5 and HMX are often touted as excellent watches for driving since it can be easily read when the hands of the drivers are on the wheels.

The HMX retails at S$47,800, and it is available in several different variants. Currently, we hear they are all sold out, but it was the most affordable MB&F watch, and we reckon that this is ideal for someone who wants something different or conversational, and yet not too radical or insane. We end this week’s article with a something that is rather extreme and audacious: the Jacob & Co. Twin Turbo.

When we took the first glance at this watch, we knew that this is going to be something that is rather incredible. After all, the watch features an uncommon wedge-shaped case design, and that there were two massive triple-axis tourbillons rotating at the 6 o’clock position of the watch. But it gets even more impressive. Push the slide on the left side of the case, and you are introduced to the sweet sounds of the Cathedral Gongs from the Decimal Repeater mechanism. Mind-blowing is probably the appropriate adjective.

While its approach and design might be subjective and definitely not everyone’s cup of tea, we think this is a technical masterpiece. It is not easy to produce either a repeater or a multiple-axis tourbillon, but to combine the two together (with two triple-axis tourbillons using a friction coupling system) is quite a block buster. However, everything comes at a price. The Twin Turbo is CHF 360,000 (approximately S$ 502,400) in this case. While quite a lot of money, but we opine its quite a lot of watch for the money.

Out of the six watches that we have featured this week, four of them were Chronographs. This is not surprisingly, as Chronographs were used to calculate time. Combined with a Tachymeter, the Chronograph is also capable of calculating both speed and distance. These are important for motor sports, and these devices were used during the events to calculate lap timing. Although, these days the digital/computerised systems are used for official timing, we still see Rolex as the Official Timekeeper for the Singapore Grand Prix.

What are some of your favourite automotive-theme watches? Or what are some of the watches that you reckon deserves a spot in this list? Let us know in the comments section below, and till the next article. In the meantime, we are off to the races. Cheers!