The MB&F Horological Machine series should well be familiar to many. Some love it while others can hardly comprehend its designs or prices. Their designs are ‘Avant-garde’ frequently inspired by sci-fi and motorsports of the 70s, with a reworked modern cue.

For MB&F founder Maximilian Büsser, growing up as a child in the 1970s meant living in a constant state of awe and wonder. In his youth, the Lamborghini Miura launched a new genre of Italian super cars that looked as though they could break the sound barrier while standing still (creations that led the young Max to dream of being a car designer). The 70s was a period of exploration and discoveries, inventions like lasers, supersonic jets, space expeditions, Star Trek, Star Wars, and all of these themes could be seen in period designs.

“Imagine telling somebody in 1972 that in 2012, most people would be wearing round watches with round dials and three hands. That would sound crazier and more far-fetched than the idea of living on Mars!” Maximilian Büsser.

In this article, we look at the Horological Machine No. 5 CarbonMacrolon (HM5 CM). A watch with super car styling; bi-directional jumping hours, a compartmentalised Engine (the watch movement) in its own water-resistant inner case; functioning louvres allowing light in to charge the Super-LumiNova indication discs; and water-draining exhaust ports. All this in a sleek, polished and satinised, pitch-black CarbonMacrolon case. CarbonMacrolon is a dense black polycarbonate resin reinforced with carbon nanotubes. It can be polished and finished like steel, feels as solid as steel and is as hard as steel. And it is black right through, so no surface coatings to scratch off.

The wedge-shaped case of HM5 is designed with inspiration from the 70s automobiles. From the back the HM5 resembles the sloped, vented rear of seventies sports cars. The purpose of the louvres on these awe-inspiring cars was to restrict sunlight (and heat) from entering the near horizontal rear window. The functional louvres on HM5 do the opposite in that they open to allow light down onto the Super-LumiNova numbers on the hours and minutes indication disks to charge them. The disks are actually flat on top of the movement (under the louvres), not vertically at the front of the case where they appear to be thanks to some optical magic. Opening and closing the louvres also changes the dial’s light intensity. The louvres are opened and closed by a slide set into the side of the case.

And no futurist icon of the 1970s is complete without a jet. HM5’s ergonomically sculptured crown looks as though it could just as easily power a rocket to the Alpha Centauri, or the Batmobile, as it powers Horological Machine No. 5 CarbonMacrolon into the future. The HM5 uses a wedge-shaped sapphire prism which refracts the otherwise flat movement digit discs at an angle. This allows the digital time display to be projected vertically. A convex lens at the front provides further magnification for visibility.

The idea behind the actual hour and minute time displays on HM5, the numbered rotating disks, are relatively simple: overlapping disks (one for hours, one for minutes) are completely covered in Super-LumiNova, which then has large 8mm numerals created by masking all of the lume except for the numbers. Because the time is reflected, the numbers are printed on the disks as mirror images so that they display correctly on the ‘dial’.

The disks rotate flat on top of the movement and yet we see the time indications vertically in a ‘dashboard’ at the front of the case. To achieve this, MB&F worked with a high-precision optical glass supplier to develop a sapphire crystal reflective prism that bent light from the disks 90°. The movement is built on the Girard-Perragaux cal. 3100, as with most of its predecessors. 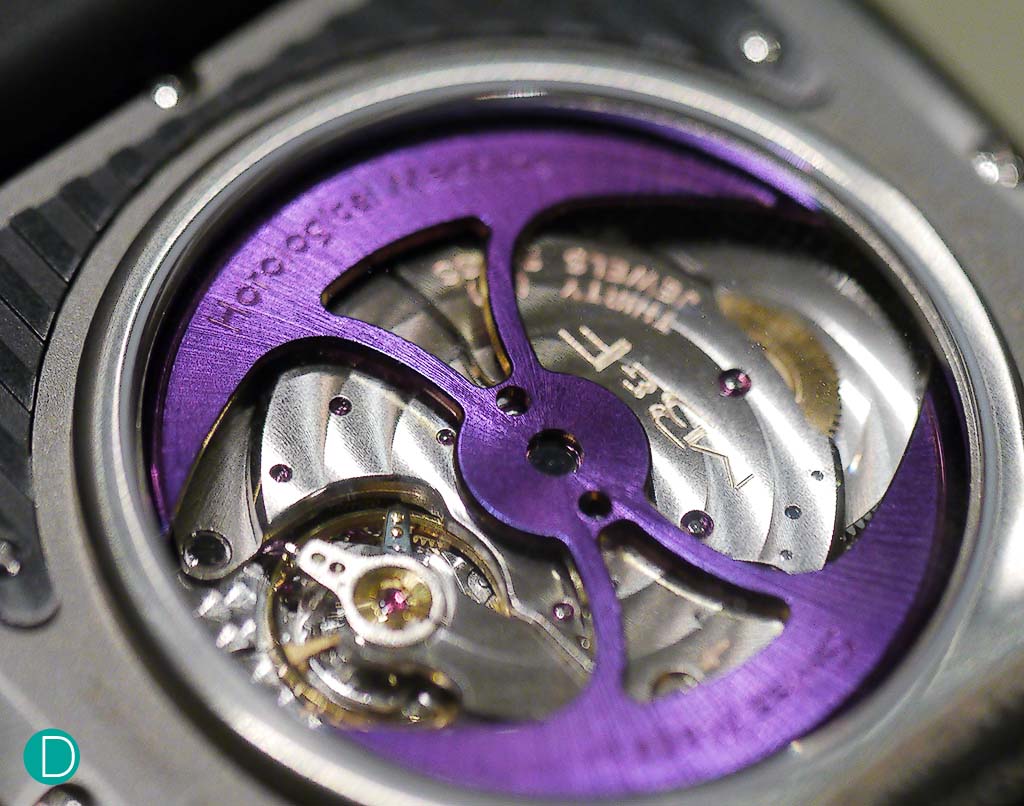 The reason for housing the Engine in an inner container is for water resistance. Those supercar louvres let in water as well as light which explains the reason for those dual exhaust ports. They act as a drainage system to remove water that enters through the louvres. Apart from dealing with moisture, the engine is also housed in an internal housing which provides for additional shock resistance and protection. This inner case is similar to the ridged chassis of a car on which the external coachwork/body is attached. Jean-François Mojon, Vincent Boucard and their team at Chronode developed the HM5 Engine/complication. It may appear simple, but it’s complicated! The jumping hours are bidirectional, enabling the time to be easily set both forwards and backwards. Great fit on the wrist. The vertical forward-facing display makes HM5 an excellent driver’s watch as there is no need to lift your wrist from the steering wheel to read the display.

We absolutely love this piece. The cool features like the louvres and the twin exhaust make this watch so much like a boy’s dream toy. That said, the design and complication (or the lack thereof) on this piece is highly similar to the Amida Digitrend which was the watch that inspired this HM5. That is probably the reason why it is priced relatively lower to its predecessors at SGD88,000. The open close mechanisms could very much become a trademark style of MB&F, as seen also in their HM6.