Every year, during this time, Singaporeans are filled with a certain level of adrenaline rush. This is thanks to the annual Singapore Grand Prix, a Formula 1 event held annually around the Marina Bay Street Circuit. And when would be a better time than now to purchase a watch with a watch with a racing theme, when the entire world is basking in the awesomeness of the Singapore Night Race?

Now, before we begin, we go back a little in time. The relationship between watches, and motorsports go way back. Race car drivers and marshals use watches to clock the cars around the circuit and to calculate things such as lap time. Aside from the practical use as timing devices, some watches are also known to be associated with race car drivers (and speed demons). For example the Rolex Daytona and the Explorer II are linked to Paul Newman and Steve McQueen respectively. Seeing the commercial potential, watchmaking houses began making car or racing themed watches. As usual, some worked, while other flopped. Here are our picks among the winners. The Bremont Jaguar MKI, with inspiration from the iconic Jaguar E-Type.

The first watch that we have today is inspired by one of the most iconic sports car in the world: the Jaguar E-Type. The alluring E-Type is probably one of the most beautiful cars that was ever made, and have been around for more than half a century. The design is timeless, and destined to be a classic.

That is probably what motivated Bremont to collaborate with Jaguar, the venerable British carmaker, to produce the Bremont Jaguar MKI. As mentioned in our review, the Bremont Jaguar MKI features many design cues from the iconic Jaguar E-Type. The dial, for example, is reminiscent of the tachometer and speedometer scale from the vehicle’s dashboard. On the flipside, the winding rotor of the automatic movement is a minimized version of the steering wheel. Nice details which make the watch special.

Thumbs up for the detailing and styling cues to the car which inspired the watch, and gets our recommendation. The Tudor Fastrider Chronograph, paired with a bright red dial.

The Tudor Fastrider Chronograph, as the name suggests, is a timepiece with the chronograph function. It is a no-frills timepiece, featuring the iconic and reliable Valjoux 7753 movement. The highlight of the timepiece, however, lies in the dial. It comes in three different colors. Each of which are also colors which are available for the motorcycle. They are the classic bright yellow, the urban olive green, as well as the retro-chic red. Each of them gives the watch a different feel. Certainly funky and refreshing.

The Tudor Fastrider Chronograph is a nice watch at a great price point for a young collector who has just started to collect watches. Following the Tudor Fastrider Chronograph, we are moving up a notch to its sister brand: Rolex. One of the greatest models from the Rolex catalogue is the Cosmograph Daytona, a watch that is associated with the Daytona race track in Florida.

Legend has it that at around the 1930s, Hans Wilsdorf was impressed with a particular speed demon named Sir Malcolm Campbell. Sir Malcolm Campbell was a regular at the Daytona Beach, in which he was setting record after record in his Blue Bird race car. Sir Malcolm became of the first and most enduring ambassadors of Rolex. Advertisements in the past had featured him extensively. There were also rumors that the “Daytona” name was included to pay homage to his achievements.

The 116520 is the latest incarnation in the Daytona collection, and we reckon it is one of the most popular models in the Rolex line-up. This is not surprising, considering its well-proportioned aesthetics, as well as its association with the glitzy and exhilarating world of motor racing. The latest model features the improved Caliber 4130, a self-winding movement that features a vertical clutch system as a 72 hours power reserve. It also features a tachymeter scale, in which it allows the user to measure the speed at which he or she is travelling.

Rolex is one of the most iconic brands in the world of horology, and it is definitely one of the “must-have” brands in one’s collection. 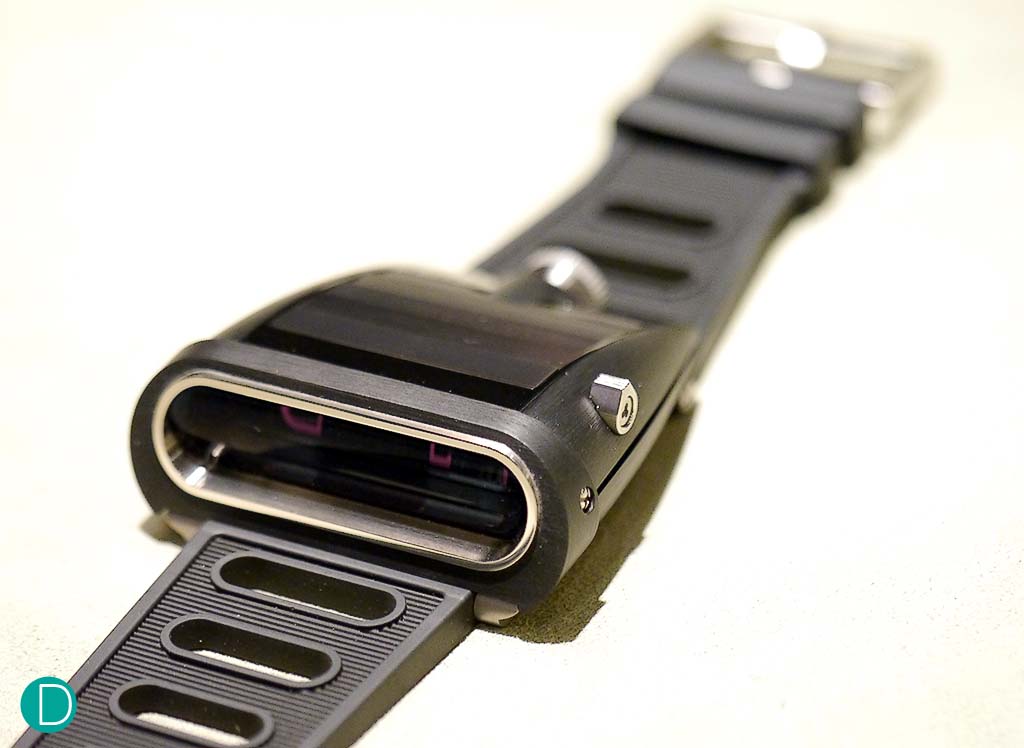 When we first saw the MB&F HM5 “CarbonMacrolon”, we were completely amazed by its appearance. We are big fans of the legendary Lamborghini Miura, and were rather pleased that Maximillian Büsser had incorporated its beautiful sleek design into the HM5.

Widely touted as the “ultimate driving watch”, the HM5 is a watch that indicates only the time. Interesting not only in the way it looks, but also in the way the watch tells the time. It features the bi-directional jumping hour function whose image is picked up by a prism to bring the light 90° to eye level. The initial idea of the configuration is to allow the drive to read the time when his hands firmly on the steering wheel.

On top of that (pun intended), the HM5 features the Lamborghini Miura inspired louvers. These louvers can be opened or closed by turning a knob, and in the open position allows the SuperLuminova on the disks to be exposed to the sunlight. In the car, the louvers covers the engine compartment and is a Miura trademark. A sheet of plexiglass was first used on the prototypes but was replaced by the louvers which allowed engine heat to escape.

Nice touches abound on the HM5, gaining our recommendation. The L.U. Chopard Engine One Tourbillon. A rather technical-looking piece, admittedly.

Next, we have something that is slightly different from the first four watches that we have featured today. The L.U. Chopard Engine One Tourbillon, features ta tourbillon, and has eye-catching aesthetics, derived from a car’s engine.

The Scheufeles, who owns Chopard, are fanatics of vintage cars. The Engine One is inspired from one of these magnificent Old Timers. The watch is designed as a form movement – a rectangle with two curved sides. And the dial is almost non existent, only markers printed on the under side of the sapphire crystal allow time to be read. The movement plate is fully visible from the watch dial side, and looks like an engine block. Pride of place taken by a tourbillon at 6 o’clock. While it is a little deviant from the usual very classical designed LUC pieces, the Engine One Tourbillon still manages to retain the traditional gracefulness. In it, Chopard have found an equilibrium between having fun, and being classy at the same time. Not a simple task, and very well done!

The Engine One Tourbillon comes in a few variants, but we have an overwhelming preference for the rose gold version which we had an opportunity to spend some time and wrote a review. Click here to read our views. The Hublot MP-05 ‘LaFerrari”. One of the more interesting looking timepieces in recent times.

Finally, we conclude the article with another intriguing looking timepiece: the Hublot MP-05 “LaFerrari”. Similar to the L.U. Chopard Engine One Tourbillon that we have featured above, the aesthetics of the MP-05 “LaFerrari” is based on an engine.

What we like about this particular MP-05 “LaFerrari” is the way it is so different from the other Hublot watches. This watch utilizes a set of drums to tell the time. There are three different drums that were used to indicate the hours, minutes, and seconds. The last drum, at the bottom left corner, indicates the power reserve.

The watch also features a staggering power reserve of 50 days. That is achieved through the use of a total of 11 barrels. To wind the watch, a power tool winder is used. Quite cool. Furthermore, the MP-05 “LaFerrari” also features a vertical tourbillon, in which it is positioned at the 6 o’clock position of the watch case.

We understand it is a big hit among Ferrari owners. And we too are a fan.

So we come to the conclusion of this week’s Throwback Sunday. As car enthusiasts, we had a great time selecting these few watches to match the theme this week. The selections, we reckon, were very diverse. From modestly priced and affordable offerings, such as the Tudor Fastrider Chrono, to the more complex and unique ones like the Hublot MP-05 “LaFerrari”. Each of them, despite their differences, have their own merits to satisfy the desires and demands of different collectors.

Anyways, we hope that you have enjoyed this week’s installment of Throwback Sundays. Have a great week ahead!