In recent times, it seems like notion of wearing a relatively large-sized timepiece is something sexy and fashionable. It is pretty prevalent, and you can probably throw a pebble in a crowd and it will most probably land on someone who wears a big watch. This is relatively unheard of in the past, when people prefer their watches to be small and discreet.

We could not really put a finger as to when the trend had actually began. One of the earliest large wrist watches was the IWC Portugieser (Reference 325) emerged in the market as early as 1939. The case size was 41.5mm, and was huge compared to the regular gentlemen’s wrist watches of the time, which tend to be closer to 32mm.

We rekon the trend for large watches probably only started in the 1990s, and can  be attributed to brands like Panerai or Audemars Piguet.

On the wrist is the Luminor Submersible 1950 Carbotech, cased at 47mm. We would consider Panerai as one of the few catalysts for introducing big watches into the consumers’ market.

The yardsticks by which we measure and consider what is large has shifted over the years. For dress watches, when the Lange 1 was launched in 1994, it was considered large, even though the IWC Portugieser introduced 50 years ago were larger. It measured 38.5mm. Large watches were not quite ready for the mainstream yet.

And for sporty watches, perhaps 40mm was the norm. The Rolex Military Submariner Ref.5517 of the 1960s measured 40mm. By then, Panerai was already producing watches measuring 47mm in diameter, like the Egiziano Ref 6154, measuring 47mm in diameter. Egiziano is Italian for Egyptian and it became known as the Small Egyptian because after Rolex stopped making watches for Panerai, Panerai made a 60mm prototype watch for the Egyptian Army which is nicknamed the Big Egyptian.

These huge watches were not considered mainstream until 1993, when both the AP Royal Oak Offshore and Panerai Luminor (pre-Vendome) was released. The case diameter was 44mm. Soon, it became a trend, and we saw some very large watches being offered. Panerai put into production a Egiziano PAM341 in 2010, a tribute to the Big Egyptian which also measured 60mm. And the U-Boat U1942 in 2009 measured some 64.4mm. Though these are by no means popular and common place watches, they were trendy, and were seen to be pushing the treshold. Today we might perhaps agree, at least for today’s discussion on a threshold of 44mm as case diameter for a wrist watch to be considered large.

Why big watches? Fashion is one reason. For a while, it was seemingly stylish to wear watches that are big. However, there are other plausible explanations too, such as the need for wrist presence, legibility, as well as the notion that big watches are more robust and solid. 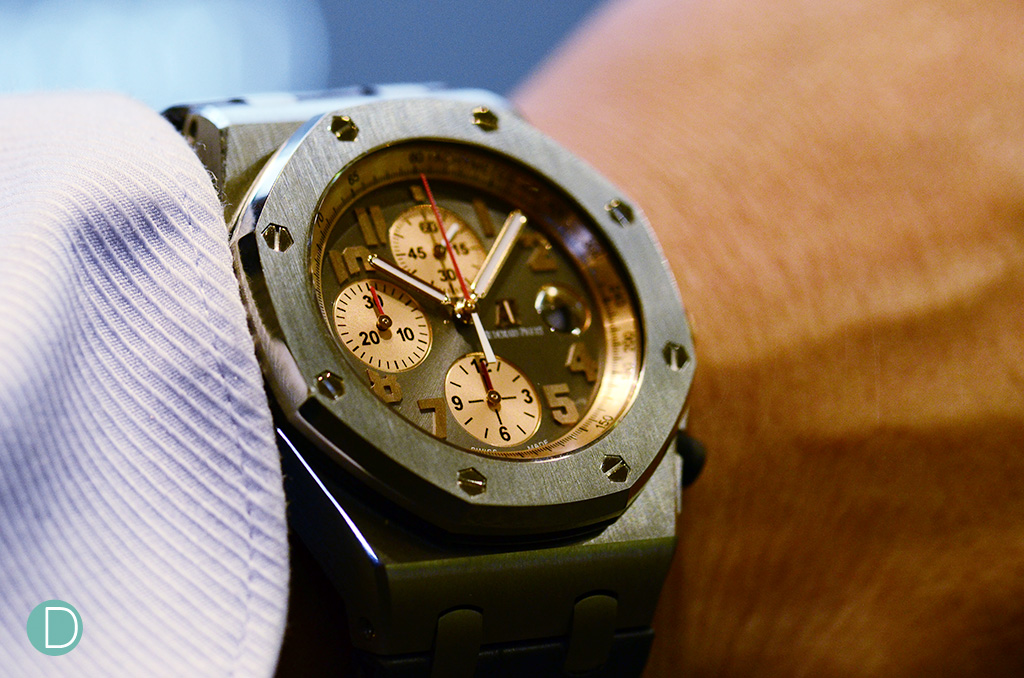 “In order to break the rules, you must first master them.”

The above is one of Audemars Piguet’s company taglines, and we reckon it is one that describes the Le Brassus-based watchmaker perfectly. The Royal Oak first broke the rules of luxury watchmaking by positioning itself as the world’s first high-end sports watch. Not only is the concept rather novel, but the watch design was special, being the creation of late Gerald Genta. In 1993, Audemars Piguet broke the rules once again with the Royal Oak Offshore. The Offshore is basically a Royal Oak on steroids, and it is widely touted as the extreme sports version of the latter.

Over the years, Audemars Piguet had spawned many different variants of the Royal Oak Offshore. Some of the more notable ones include the Diver, Rubberclad, Themes, End of Days, and the Terminator 3 (T3, for short). These pieces range from 42mm to 53mm (with the inclusion of the massive crown guards on the T3). While the 42mm variants may not have exactly met the criteria to be considered as a massive watch, but its chunky case does allows us to argument otherwise. Next up, we have the Zenith Pilot Type 20 Extra Special. The watch was first launched in 2014, and it was met with roaring success. This is not surprising, considering the friendly retail price and its charming rustic looks.

As its name suggests, the “Extra Special” was supposedly to pay homage to the vintage pilot watches that Zenith had produced in the past. In fact, the design of the watch was based on the original military pilot watch that Zenith had produced in 1931. The numeral markers on the dial uses the same font as the original. Notably, the hands, the large onion crown, as well as the lugs are also stylistically similar.

There are several different variants in the collection, but we are particularly fond of the bronze version that we have reviewed here. The rustic bronze case brings out the vintage feel of the timepiece, and it certainly gives us that impression. We think that with age and patina, it can only become more handsome.

At 45mm, the Zenith Pilot Type 20 Extra Special is certainly a big watch. This is further accentuated by the thin bezel, which gives us the optical illusion that the watch is much bigger than it seems. Overall, this is a stylish and versatile watch, with great wrist presence.

When one thinks of A. Lange & Söhne watches, it is usually the dressy Lange 1 or the Datograph that comes to mind. The Glashütte-based watchmaker is known to manufacture discreet and elegant timepieces, which of course are finished to high standards.

A. Lange & Söhne, with its quintessential Teutonic image, have created some massive watches. These pieces include the Lange 31 (45.9mm), the Richard Lange Perpetual Calendar “Terraluna” (45.5mm), as well as the legendary Grande Complication (50mm). However, Lange’s large watches are not due to their homage to the trend, but rather by function. The complications require space and larger case is specified. One of the latest additions to the Lange family, the Zeitwerk Minute Repeater, is no exception either.

The Zeitwerk, in its most basic variant, is already a rather complicated watch to begin with. The watch gained its inspiration from a great clock in Semper, an opera house in Dresden. Similar to the clock, the Zeitwerk features a digital display in which it is operated fully by the various mechanisms in the watch. The movement of a basic Zeitwerk alone contains no less than 415 components to manufacture, which shows the complexity and the challenge to manufacture such a timepiece. But Lange fitted this into a case of 41.9mm. The Zeitwerk Minute Repeater released this year, is definitely much more complicated with a grand total of 771 movement parts. Thus, the case size was increased 44.2mm (in diameter) by 14.1mm (in height) to fit the Caliber L043.5 movement.

Despite the behemoth size, the Zeitwerk Minute Repeater is surprisingly a rather comfortable watch to wear on the wrist. It also looks stunning, and its finishing is simply superb. At the beginning of the article, we reckon that robustness is one of the main reasons why some consumers prefer to purchase big watches. That is why we thought that it will be apt to include a tool watch in this article, and what would be a better candidate than an upsized version of the iconic tool watch from Rolex? Bring in the Rolex Deepsea Sea-Dweller.

The Deepsea Sea-Dweller, or DSSD for short, first debuted in 2008. On the first glance, it seems like the DSSD is a blown-up version of both the Submariner and the Sea-Dweller. At 44mm (diameter), it is some 4mm larger than the Sea-Dweller it replaced. , the DSSD is definitely one of the largest and chunkiest timepiecse in the Rolex collection (with the exception the Deepsea Challenge). This, together with a helium escape valve and a 5.5mm thick sapphire crystal, allows the DSSD to reach a water-resistance depth of 3,900m (12,800ft).

This is certainly a large watch, and one which feels so. The watch has heft, and is rather bulky, and many critics argue against the immense size. However, the fans argue that this makes the DSSD sturdier and hence reemphasizing the fact that it is a hardened tool watch. We then turn our attention to Officine Panerai.

The company have two main collections: the Radiomir and Luminor. The latter, which we believe is the more popular model, features the now emblematic big case with a conspicuous crown guard at the side. Most of the consumers prefer their Panerai watches to be fitted with the 44mm and 47mm case, although a minority might have opted for either the 40mm or 42mm variant. At the other end of the scale, there is also the Egiziano which features monstrous 60mm titanium case.

Of course, the Egiziano’s 60mm case is probably too big for most of us to handle. Hence, Panerai had created a modern evolution of the Egiziano which is known as the Submersible. Some of the features that remained include the rotatable bezel, as well as the sub-seconds hand at the 9 o’clock position. Over the years, many different versions of the Submersible were created. This include the Submersible 1950 Carbotech which we reviewed. The watch case (as well as the bezel and crown guard) is made from thin sheets of carbon fiber fabric and compressed at a controlled temperature under high pressure together with the polymer PEEK (Polyether Ether Ketone). Interestingly, the pattern that created is unique and it cannot be replicated or found on any other similar pieces that were manufactured.

Wrist presence? Yes, this is what I call wrist presence! Featuring the outrageous Urwerk UR-1001 Titan.

Saving the best for the last, we have the colossal Urwerk UR-1001 Titan. Known as the Zeit Device, the UR1001 is one of the most outrageous timepieces that money can buy. It is the culmination of Urwerk’s work since its inception nearly 2 decades ago.

In BaselWorld 2015, Urwerk had decided to create a new iteration of the UR-1001 with the Titan. It is basically taking the UR-1001 pocket watch, and fitting a strap that consists of a two piece construction onto the device. While it is a seemingly simple concept, but it had given the UR-1001 a totally different identity.

Read our full review to discover this enormous watch.

Well, we have finally come to an end to this week’s Throwback Sundays. As usual, we have selected some usual suspects, such as the AP ROO and the Panerai Luminor. They are the essentials and icons when it comes to big watches. They are so symbolic that whenever one talks about big watches, these two timepieces would certainly come into play.

We have also included some interesting choices, such as the Zenith Type 20 and the Urwerk. The former, we reckon, offers both the looks and the value proposition that would attract a young and budding watch collecting. In our opinion, it is comparable to another similar timepiece: the IWC Big Pilot. The Urwerk, on the other hand, is intriguing because of its concept and its sheer size.

Anyway, we hope that you have enjoyed this week’s Throwback Sundays. Please share with us some of the big watches that you have owned over the years, and do have a great week ahead!