The Stainless steel boutique edition orange diver, limited to 300 pieces worldwide. It was first released in 2006. This watch, courtesy of a gentleman collector, is cased at 44mm, a tad larger than the modern divers.

Following the success of Gerald Genta’s A-series Jumbo, the Royal Oak Offshore took its form and was revealed in 1993. This marked the second installment of Audemars Piguet’s investment in the Royal Oak series, and it was again a major success. Audemars Piguet was creating waves in the watch industry with this blockbuster line. It had single handedly created a whole new product class that remains highly relevant till today. It created the class of the ‘Oversized Sports Luxury Timepiece’. In this review we run a comparison of two AP divers, namely a 2006 stainless steel Boutique edition and the 2012 forged carbon diver.

The most significant difference is the case material and dial alteration. While these two are the most important changes, I will begin with the size difference. The older version started at 44 x 14.2 mm, while the newer forged carbon is sized at 42mm. This is a good change for fans with small wrists. Due to the extended lugs and overall hefty design, the watch usually wears larger than other watches in a similar size category. A vertical lug to lug measurement is approximately 55 mm. This is a painful consideration particularly for chaps with thin wrists. For guys with smaller wrists like myself, a ROO (Royal Oak Offshore) chronograph tends to look very awkward. Fortunately for us, there is the diver. The dial layout with 12 block sized numerals in bright orange. Some may find the dial too cluttered and the contrasting mega tapisserrie motif looks particularly compressed and surrounded.

The specifications of both watches remain mostly the same, both are waterproof to 300m or 1000 ft. Both watches run on a similar movement, but the former uses the caliber 2325 while the later forged carbon diver uses the 3120 calibre which runs with a power reserve of 60 hours. Both watches also retain a distinctive DNA, the Royal Oak case design and distinctive striking colours. Orange on the steel and yellow on the forged carbon.

But the major difference between the two is the pioneering use of forged carbon in the 2012 diver.

Before we jump into an analysis, this is some background information about the material itself. Audemars Piguet first experimented with carbon watch parts in the 1980s and realised that the material possessed large potential. Forged carbon is the registered brand of an aeronautical company in the region of Lyon, France. The idea of using carbon for the case or other elements of the watch originated in a meeting between the Swiss manufacturer and Vincent Duqueine, head of the French company. Furthermore, forged carbon has obvious qualities: it is very resistant, while remaining very light. From an aesthetic point of view, its marbled effect, satiny and soft to the touch, is particularly prized. Side profile of the steel diver, well built for toughness. The case construction is highly utilitarian, but with a good contrast of polish and matte finishing.

Forged Carbon’s association with motorsports in recent years has further enhanced its cool factor. It is commonly used as brake disc composites as it is extremely lightweight as compared to the traditional steel and also extremely heat resistant. This automotive association thus saw the use of carbon fibre and forged carbon in many motorsports related timepieces. So how exactly does the material fare in terms of durability?

There is a recurring issue of durability for both watches.The rubber parts in between the bezel and the centre case as well as that on the two crowns are said to wear off or degrade after some years. In terms of wearability, the forged carbon actually wears better because of the smaller size and much lighter weight. Its case is made with titanium and forged carbon and the total weight of the relatively large looking watch is only about a 100 grams. The steel version however is much heavier. However, forged carbon as a material is after all compressed shreds of resin (plastic) and some express a lack of confidence in the strength and hardness of the material. Although it is not present in this example, some owners of FC (forged carbon) divers have observed weaknesses in the material. 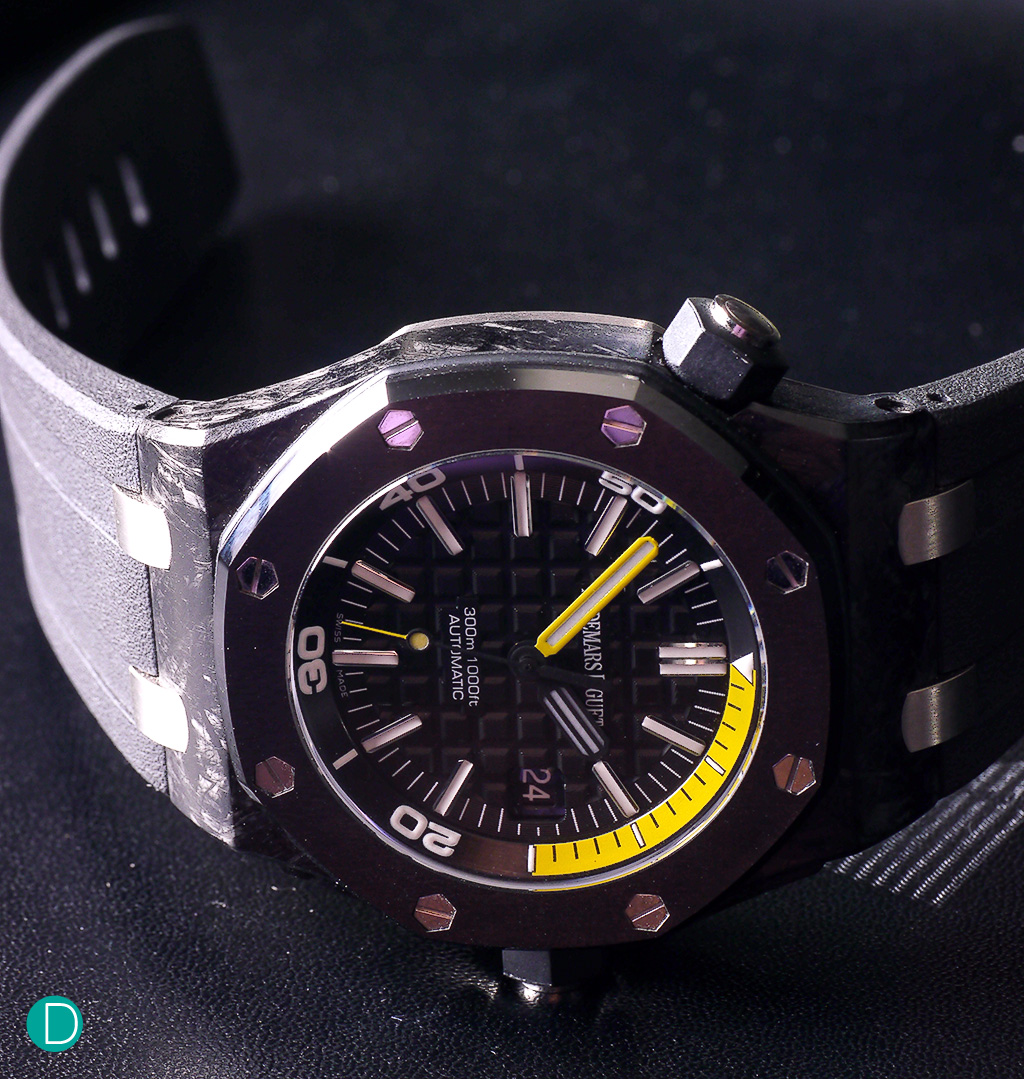 The stealthy black case of the FC diver makes it look slimmer and more subtle as compared to its steel ancestor. The trade off however is in the strength of the resin material, and fragility of the ceramic bezel.

I may be biased but the FC diver is certainly a better looker than the previous steel version. Apart from the aesthetic appeal of the material, it is combined with a highly attractive ceramic bezel. The watch may be black but it is anything but dull. Under some light, it sheds subtle glows of character. Furthermore, the uniqueness of every single  FC diver is unparalleled. According to Yves Leuba, head of Audemars Piguet’s forged carbon department, there cannot be two identical forged carbon cases due to its meticulous and unique production process. This is a result of the random nature of compressing pieces of fibre under high heat. Each case and mould is consequently independent of each other.

Then again, forged carbon pieces tend to command a hefty premium to steel at retail. It is a trade off for essentially a same watch but at dangerously different prices, and for ‘plastic’, as some would condescend. But as for me, I would go with the FC diver.