The Lange 31 is a unique and very interesting watch, but have not really enjoyed popularity. Why?

It is a watch which runs at a constant rate for 31 whole days without winding? Impossible, say some…Can be done, says the incredible team at Lange. The result – the Lange 31. A very handsome watch, with a simple dial, but hiding an incredibly complex mechanism to crack the 31 day running train. 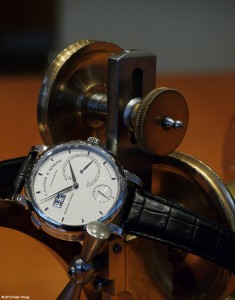 Not only does the watch run without being wound for 31 whole days, it does so with a constant amplitude…keeping 270 degrees on the balance wheel throughout.
Great power can be achieved by making more powerful mainsprings. Stacking two large mainsprings to achieve long power reserves is not only inelegant, but also presents its own problems. At 20 N-mm, the power from the mainspring driving the drive train would cause instant and extremely severe overbanking of the balance – there is just too much power for the balance to handle. If one makes the balance sufficiently strong to handle the power, it would be very large, and due to this, its inertia would cause it to consume the power from the mainspring quickly, and not able to last the intended design power reserve. The way Lange went about to solve the remontoir is both elegant and complex. The engineers devised a remontoir mounted between two fourth wheels stacked on top of each other, and connected only by the spring of the remontoir. The remointoir recharges once every 10 seconds.

As in a typical watch, the third wheel drives the pinon of fourth wheel directly which makes one revolution every minute. The Lange 31 has 2 fourth wheels. Each is stacked on top of each other and connected only by the remontoir spring in between them. Both are able to move independent of each other and only bound by the limits caused by this remontoir spring. Both fourth wheels makes one revolution every minute, except that a special escapement – the remontoir escapement causes the bottom one to be locked for 10s. It then is released and jumps in spurts once every 10 seconds, while the other fourth wheel moves like that on a normal watch. When the one toothed wheel is unlocked it releases the full power of the mainspring, and rapidly jumps half a revolution only to be locked by the other pallet. As it is jumps, its pinon drives the bottom fourth wheel which winds the remontoir connected to it. The speed of advance is the relative power difference between the mainspring and the remontoir spring…which is a huge mismatch in power, thus the power train jumps once every 10 seconds. One can observe this in the movement, and also in the minute hand which, being attached to the second wheel, is released once every 10 seconds, and jumps once every 10 second block. Around this cam is a specially designed lever with two ruby teeth in contact with the cam, and the other end which engages on the special one toothed remontoir escape wheel. This lever is pivotted outside the power train, and is able to move from side to side controlled by the rotating cam. At any one time, one of the two pallets on the lever is engaged with the one tooth wheel, and locks the escapement. But as the cam rotates, it causes the lever to move from side to side, and this action causes the pallet holding the one toothed wheel in place to unlock, and the other pallet to move into position to catch the tooth as it spins across to the other side. At this precise unlocking angle, the third wheel to deliver its power to the bottom fourth wheel. This phenomena is known as escaping in horology…the power of the mainspring is allowed to escape, in a controlled rate by the escapement mechanism. The power flows from the third to the lower fourth wheel, via the pinon of the remontoir escapement is used to reload the remontoir spring, and due to the great strength of the mainspring barrels, occurs almost instantaneously. However, this unleashing of power is short lived, as the cam would have moved into another position which then engages the other pallet of lever to lock the one toothed wheel. As the cam is 3 sided, it causes this to occur once every 10 seconds, and achieves the remontoir escapement. The remontoir escapement is a complication which is as difficult to adjust and regulate as a tourbillon escapement, and hence the equivalent pricing strategy.

Further, a spring discharge is not provide constant torque, but one which obeys the laws of physics, and discharges according to a reverse s-curve like shown in the picture below. I will be using a series of photographs used in the presentation to explain the theory behind solving this problem. Please excluse the less than perfect pictures – but I think they capture the spirit of the presentation with Tony de Haas pointing and gesticulating, and shows the theory well:

I am rather impressed with the technical prowress of this watch. So it is with great interest that I follow the commercial progress of the Lange 31. Unfortunately I find the watch not to be very popular, commercially. I am not entirely sure why not, but can offer that perhaps the very large size of the watch, and the plain-ness of the dial, looking very discrete, not calling attention to itself as reasons. Yet hidden within, is the incredible technical achievements packed into the rather large and thick case.

But history has shown us in the past that models from the great houses which were not commercially successful at launch and production years are the ones which manage to achieve impressive results in auctions years on. One example is the Rolex Daytona, another is the Patek Philippe Amagnetic. At launch, they were poor commercial performers, but when disconnected (I refer to the first series of Daytonas, as later generations are extremely popular) proved to be highly sought after and achieving very high auction results.

Perhaps the Lange 31 might be one of those as well. For me, a key BUY recommendation.