The Salon International de la Haute Horlogerie is one of the two foremost watch shows each year. The SIHH is held in Geneva, and more of a luxury nature, and BaselWorld, which is the other is held in Basel in March, and perhaps more commercial and accessable to the general public.

Admission to the SIHH is only by invitation, and considered an industry event mainly hosted by brands within the Richemont group as well as a few independents. Other independents and some other brands also take advantage of the presence of the world’s retailers and journalists to hold showings and private meetings.

I have been attending the SIHH since 2001, and been following the progress of the luxury watchmakers who exhibit there. This year, as the Deployant team has just returned from the SIHH, I thought I’d begin with some thoughts on the 5 most impressive watches which caught my eye.

As it turns out, the list has 3 watches which feature a moonphase display, 2 with a perpetual calendar complication,and 2 with a tourbillon regulator.  I did not start out with these complications in mind. I am rather less surprised that the entire selection features watches which are magnificently and beautifully finished. So, without further ado, here is my list.

In the buzz around the halls of the Palexpo where the SIHH is held, there are many who found the 1815 Tourbillon to be a candidate for Most Interesting. The watch is  approachable in the simple 3 hand design. It also features the world premier of a zero reset of the seconds hand mounted on the axe of the stop second tourbillon, so that alone is grounds to be a candidate for the most impressive list. But I found the Richard Lange Perpetual Calendar “Terra Luna” to be more interesting. The Richard Lange Perpetual Calendar “Terra Luna” houses a totally new movement with perpetual calendar, the L096.1 is a 14 day power reserve and remontoir escapement, with a unique and beautiful way to present the progress of the moon across the firmament. As is typical of the Lange brand DNA, the movement is beautifully laid out, and nicely finished. The watch is very teutonic in feel, being rather large at 45.5mm diameter and 16.5mm thick. The time display on the main dial is regulator style, with the perpetual calendar indications in window cutouts. The trademark outsized date takes center stage. An arc cutout reveals the power reserve indication in days. Pictured above, the bridge carrying the remontoir mechanism first seen on the Lange 31. Magnificent rework of an old caliber into a stunning rendition of a skeleton watch, marks the return of VC to skeletonising complicated watches. This is one VC speciality that has been missing on its arsenal of offerings until this year. The skeletoning begins with the base caliber 3790 SQ, an inhouse produced perpetual calendar, tourbillon form shaped movement. The watchmakers first work on the bridges and movements to open up as much of the movement to be visible to the admirer. This is a rather delicate process, as the watchmakers need to guarantee the structural integrity of the movement, while removing material which weakens the structure. The delicate balance is of critical importance. After the watchmakers have done the structural removal, the artisans begin their work of hand engraving the movmeent. The result is one where the skeletonized bridges make the movement sparkle like diamonds in the light. As an example, the sapphire glass dial, with a cutout to showcase the magnificent tourbillon bridge – rounded, tapered, and black polished, holding the gold chaton which provides the support for the axe of the tourbillon carriage to mount to the seconds hand. The Toric line within the ParmigianiFleurier collection is reserved for complicated timepieces. The Capitole is one of the more interesting ones to me. Some might name the Resonance as their iconic Parmigiani for SIHH 2014. They have their reasons, as the huge date display, possibly the largest in the market today, is a very interesting feature. But for me, the simplicity of the wandering hour in the sector display is most mesmerising. The hour marker is in a massive applique numeral on a mother of pearl disc.

The movement, the PF321 is also equally impressive. I find the movement layout to be quite aestetically pleasing as well as technically interesting. Note the many inward angles on the bridges, and the wolf’s teeth on the mainspring. Note also the serpent cathederal gongs, visible in silver and blue bicolor.

The finishing is immaculate, done to the highest levels. Note the black polished hammers, with a beautifully finished anglage. Sonically, the repeater does its work well. The regulator buzzes softly. To me the buzz did not deter from the crystaline strikes of the gongs, but the regulator is clearly audible. The strikes are clear, fairly loud, and the decay of the notes are particularly delicious, as it reveberate through the large case. I am sure the wavy nature of the gong and that they go round the case more than 1 round makes this sonic treat more exquisite. Not strictly a watch shown at the SIHH, but a private showing at the Four Seasons Hotel, but a gorgeous interpretation of the jumping hour with retrograde function with a 3 dimensional moon display. The concept of a jumping hour and rotating disc minute display is certainly not novel. But the execution of this concept in the DB28 Digitale is totally fantastic. I can just describe the watch in one phrase…stunning beauty. The guilloche dial, the drop dead gorgeous tone of the flame blued sector dial and disc representing the sky is stunning. The movement, typical of Debethune is finished exquisitely. The use of advanced materials like silicium is typical of Debethune calibers. Attention to detail is immaculate. As an example, the lugs are skeletonised and articulating to allow for a closer fit for comfort to the wearer’s wrist. 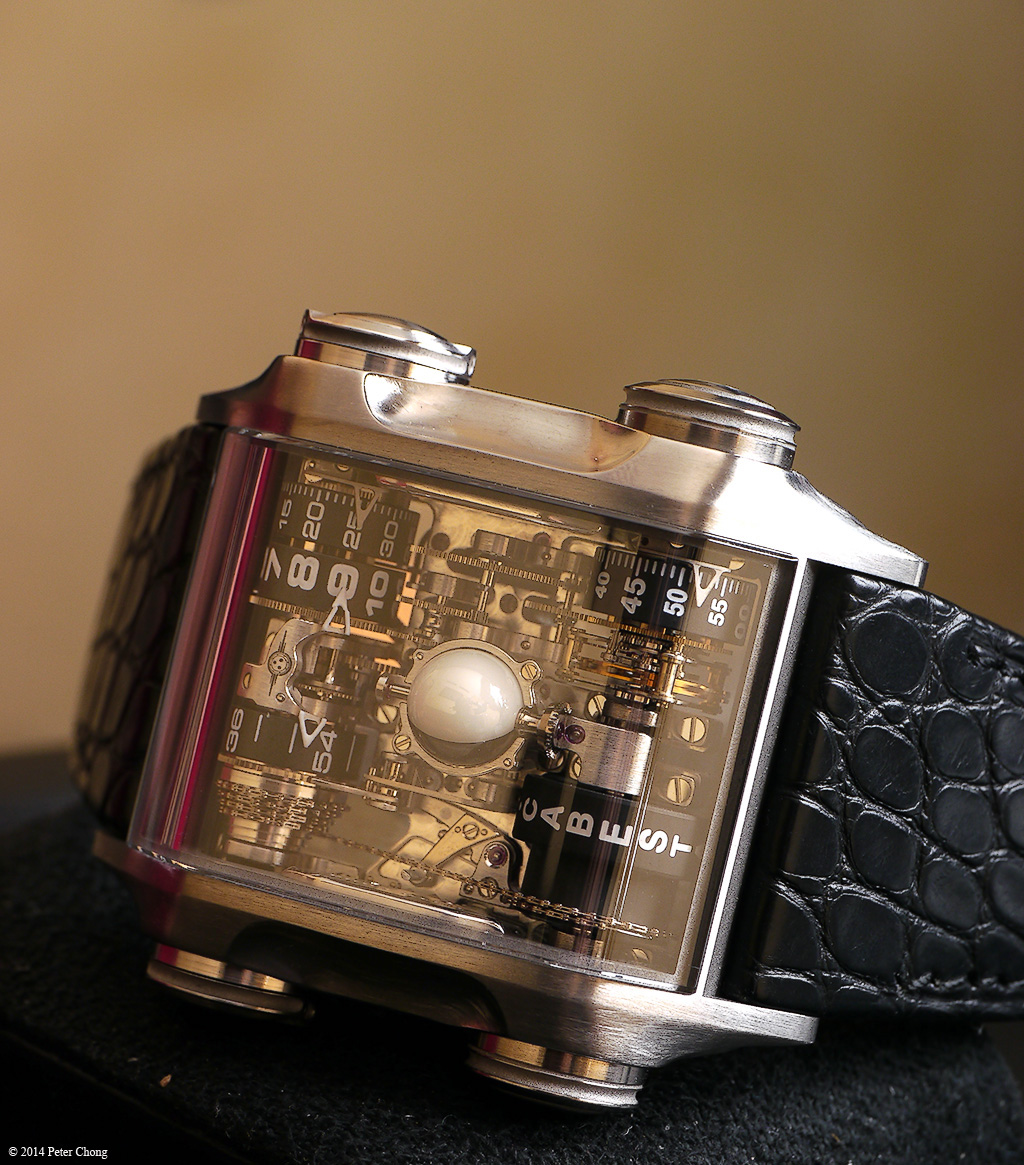 Also not shown in the SIHH, but an even more private showing. And one which is a bit unusual. The original Cabestan was the brain child of the odd marriage between Vianney Halter and Jean François Ruchonet, the project was kind of abandoned for a while. But the concept of a watch with a vertical tourbillon in a fusee chain movement is so interesting, that it was revived with Eric Coudray handling the technical stuff. The new venture suffered some commercial difficulty, and soon changed hands. The new owner, Lionel Bertoux, continued to work with Eric Coudray. The latest product from Cabestan is the Terra Luna, shown above with Eric. The movement is the CAB102L, retains the vertical tourbillon with constant force delivered by a fusee and chain system. The 3d moon, measuring some 7.9mm in diameter is in ceramic, and takes center stage. The movement is nicely finished. The bridges are laid out like a grid on a circuit board. I can see that this echos the rectangular nature of the case. But I would have preferred to see a more traditional virtuoso approach to design and execution with nice, sharp inward and outward points. The stainless steel chain is 160 mm long composed of 235 links and 156 rivets. Each link is polished, and hand assembled.

Though not totally new, I found the watch to be quite captivating. And it wears rather well on the wrist. Not also new watch, per say, but the iconic Reverso 1931 with a an absolutely gorgeous dial. As this watch is iconic of the brand and rather more affordably priced than other selection in this list, I am sure it will also prove to be a great commercial success. I hasten to add that I have not included some potential candidates to this list as I did not manage to see, touch, feel, photograph and talk to the brand about those watches. Amongst these, which perhaps should be mentioned would be these two:

1. Jaeger LeCoultre Hybris Mechanica Eleven Ultra Thin Minute Repeater Flying Tourbillon. Incredible ultra thin automatic wrist watch with répétition minute, tourbillon! Executing a watch with just one of these complications is indeed already a feat, but to squeeze all those into a case merely 7.9mm thick makes a tremendous achievement.

To reduce the thickness, the movement features a peripheral winding system. One which Patek Philippe has tried and failed in the 60s, and perhaps the only other successful execution is found in the Bucherer A1000. The tourbillon is also unusual as it is a flying tourbillon sans cage, that means the balance wheel is also flying, and the entire tourbillon system is only anchored at the base. This allows the movement to have a reduced height. The now standard, but still innovative crystal gong system for the JLC repeater is used, where the gongs are directly mounted to the crystals for increased volume, and perhaps elimiating the consideration for case material.

Impressive package. And one I am eagerly waiting to get my hands on soon.

2. Montblanc Meisterstück Heritage Perpetual Calendar. A rather regular looking perpetual calendar in a round case, at first glance looks like the JLC Master Perpetual Calendar. No real surprise there, as the new chief of Montblanc is none other than Jerome Lambert, who had previously helmed JLC for a number of years. But the game changer here is the retail price of this watch in steel is a tad below €10k and in gold €16.9k. Quite possibly the most affordable perpetual calendar in the market. This is disruptive marketing. I await in eager anticipation as this pricing level resonate throughout the watchmaking community.

What are your top 5 picks? Which ones impressed you? Which ones would you be interested to add to your collection?