Arnold & Son have been making waves recently. The Arnold & Son DTE (DTE stands for Double Tourbillion Escapement) is a double tourbillon wristwatch released in BaselWorld 2014. Two additional models were released at BaselWorld 2015, and the subject of this review.

Arnold & Son is an old and very illustrious watchmaking firm started by John Arnold in The Strand, London in 1762. The firm was famous for its chronometry and as a supplier to the royalty of the day. Many interesting and horologically important pieces were made by Arnold & Son. But with the death of John Arnold, though his son took over the business, the firm soon lapsed into oblivion. This was the fate of almost all the English watchmakers: Graham, Tompion, Harrison, Earnshaw amongst others.

In 1995, a company called The British Masters, started by Eric Loth, Ernst Tompke and Pierre-André Finazzi then acquired the names of all the old and non-commercially functioning English firms, including Arnold & Son, Graham amongst others. As these names had no manufacturing cability, The plan was for them to to manufacture the watches in Switzerland with Jean-Pierre Jaquet of Jaquet S.A. They did so, and the watches, though bearing an English name, were totally Swiss in design and execution, with almost no design cues from the English masters.

Jean-Pierre was arrested in 2003 on charges which include robbery, receiving stolen goods, and counterfeiting of merchandise. With his arrest, Jaquet S.A. was reorganized by Frédéric Wenger of Prothor Holdings as La Joux-Perret. Subsequently, Prothor also acquired Arnold & Son from The British Masters in 2010. Prothor sold La Joux-Perret and Arnold & Son to Japanese giant Citizen in 2012. Loth retained control of Graham, and still produces watches under the name. We covered their super complicated piece here.

Under Citizen, the firm flourished, releasing a slew of new watches with new movements. They were also responsible for the revival of Angelus when they announced the U10 Tourbillon in BaselWorld 2015.

The watch is rather stunning. With two large, suspended tourbillons taking center stage, the visual impact is high. It is vaguely reminiscent of the MB&F LM2, though the LM2 is not equipped with a tourbillon, much less two. The similarity is mainly in the bridges used to suspend the balances, but on closer examination, they are dis-similar. The DTE’s double bridges are angular and reaches from the center of the dial outwards, whilst the LM2 are curved from the edge of the dial inwards.

The déjà vu feeling is also on the lacquered, curved sub-dials which are used to display time. But again, on close examination, they are different, as the DTE dials are stepped while the LM2 uses laquer which is stretched over a domed dial. Also the Arnold & Son displays two timezones and utilizes two subdials while lacking a power reserve indicator. 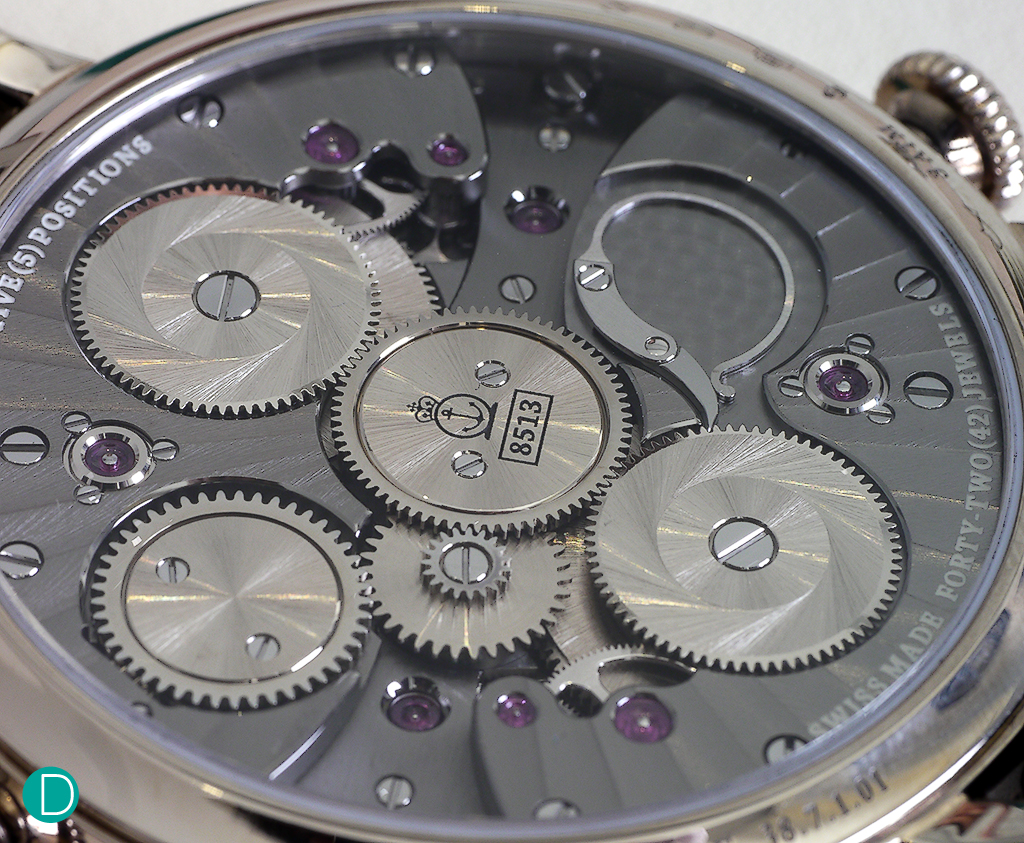 The movement is made of maillechort, and rhodium treated.

The movement is hand finished and we can note hand anglage on the bridges and polished edges. We also note perlage as well as the use of blued screws which are bevelled and have mirror polished heads.

The movement plate is visible from the front of the dial, and is decorated with Côtes de Genève, as are the plate on the movement back, The execution is very well well done, and the lines are even, and clear. The use of rhodium plating darkens the plates slightly, and unlike untreated maillechort plates will not acquire a patina over time. The Arnold & Son DTE. Note the finishing. Côtes de Genève applied on the main plate which is made of maillechort. And the lacquered subdials carring the home time and GMT time, and the tourbillon bridges which are beautifully polished.

As a bonus (this is not a Watchscapes article) we include a wallpaper sized (1920 x 1200 pixels) image of the above. As usual, this is provided at a license free use on the condition that the image is only for personal and non-commercial use, and not modified in any way. You agree to this condition when you click on this link. We think Arnold & Son has come a long way. With the Citizen backing, we see a more mature strategy and implementation which has resulted in very interesting, well thought out watches like the DTE.

The designs of the DTE, as mentioned is reminiscent of the MB&F LM2, but this is not the only watch in their collection which reminds one of another. Although, truth be told, and we mentioned this above, on closer examination, it is merely a déjà vu feeling rather than any concrete similarities between the watches. The DTE is far more technical, incorporating dual timezones as well as dual tourbillons.

In terms of finishing, the DTE is no slouch. It keeps up with the rest of the competition at that price level. The finishing is well prescribed, and beautifully executed, and we spotted no cutting of corners or where the finishing is less than almost perfect. A magnificent timepiece.

With this, we can make a high recommendation. We love the visual impact, We really enjoy the technical virtuosity of the double tourbillons, worn on the sleeve, so to speak for the world to see. Bravo. Nice job Arnold & Son. Another view of the dial side. The dual suspended tourbillons are quite a visual specatacle.

Case: 18K red gold or 18K white gold measuring 43.5 mm in diameter with display case back. Each limited to 28 pieces.

Crystal: cambered sapphire with anti-reflective coating on both sides.