Some of us may remember having an Angelus alarm clock by the bedside waking us up when we want to continue to sleep. Although, we suspect, most of you dear readers probably will be too young to have experienced Angelus in this way. But perhaps more of you will remember the use of NOS 8 day Angelus movements by Panerai. The company was founded in 1891, and thrived in Le Locle for nearly a century and was well known for creating exceptional chronograph and multi complication wristwatches, multi display travel clock and alarm watches as well as the groundbreaking 8 day movement used in the Panerai. As did many other Swiss manufactures, it went defunct in the 1970s due to the quartz crisis. What a pity. But recently, under the auspices of Citizen, and their newly acquired manufacture in Switzerland – La Joux Perret, Angelus is revived. From the ashes, the first product to bear the name again is the Angelus U10 Tourbillon Lumière. The Angelus U10 Tourbillon Lumière. A modernist avant garde approach to the age old complication of a tourbillon.

The Angelus U10 Tourbillon Lumière

To continue the story of Angelus, the brand achieved a number of watchmaking world-firsts, including, first series wristwatch chronograph with calendar, the first wristwatch chronograph with big date, first wristwatch with alarm and date, first automatic repeater wristwatch, and first fully waterproof repeater wristwatch. Until it came to a halt, killed by the quartz crisis, like almost all of the Swiss watch industry. The new Angelus U10 Tourbillon Lumière, now manufactured by La Joux Perret in La Chaux du Fonds, just a stone’s throw away from the original manufacture in Le Locle, is designed a a modernist approach to the tourbillon. Like modernist cuisine which feature traditional ingredients, modern cooking techniques and usually a deconstructed presentation, the Angelus U10 Tourbillon Lumière is similar. Traditional tourbillon movement with a seconds morte mechanism, a 90 hour power reserve with an indication on the case side. In other words, a totally avant garde approach suppoted by a visual design which is clean, modern and yes, a tourbillon which “lives” outside the movement proper in a deconstructed way.

Angelus’ Head of Development Sébastien Chaulmontet reveals that the configuration of the tourbillon was his starting point when designing the U10 Tourbillon Lumière. He says: “We always first think of the final design of the watch that we wish to create. For the U10 Tourbillon Lumière, we wanted a large tourbillon displayed on its own in a sapphire showcase. In order to realize the design we had to develop a new movement from scratch, with the tourbillon configured apart from the rest of the movement. The case and the movement then went through several phases of development so that they worked perfectly together, both technically and visually, before arriving at the final, emphatically sculptural, result.”

The Angelus U10 Tourbillon Lumière case is a lozenge style case, rectangular so that the long side is along the arm. The case is in stainless steel, and feautures sapphire glass openings to allow a good view of the dial, tourbillon and movement, hence the name lumière, meaning light in French. The Angelus U10 Tourbillon Lumière features a linear power reserve display which is viewed from an aperture on the case side by the strap.

The dial takes its design cue from the Alarm Clocks produced by Angelus from the 1930 to 1960s. The dial proper is a sapphire glass plate, engraved with the time indicator markings, and seem to float above the darkened baseplate. The design daringly taunts the cause of the demise of the former Angelus – the quartz watch by using the design language from the era. Design icons like the borderless convex screen of the Doney 14 transistor TV designed by Richard Sapper and Marco Zanuso for Brionvega is used as inspiration. For example, the perpendicular kink in the large wrap-over crystal of the tourbillon vitrine is also reminiscent of the shape of Sapper and Zanuso’s Algol television for the same company. As the movement features a seconds morte mechanism, the large seconds hand makes its staccatto movements across the dial by jumping each second. This is yet another delightful nod and jibe towards the quartz watches which, in order to save battery power had to use stepper motors to advance the seconds hand one second a time…jumping so to speak. In a mechanical watch, this is a complex mechanism. This seconds morte mechanism translates the movement of the fourth wheel which makes 5 small steps each second, so small it looks almost to be smoothly traversing the dial to the naked eye; into a single jump every second…imitating and perhaps mocking the quartz second hand. This design flair taunts its own history, and is a refreshing language in our minds. The wraparound glass to showcase the deconstructed tourbillon which “lives” outside of the movement on the Angelus U10 Tourbillon Lumière.

The movement, as mentioned is  manual-wind Angelus in-house caliber A100 with 38 jewels, 18,000 vph and a power reserve of 90 hours. Functions are: hours, minutes, central dead beat seconds, one-minute flying tourbillon, linear power reserve indication. A large diameter one-minute tourbillon requires significant energy, which is amply supplied by the dual main spring barrels. The two mainspring barrels are optimally sized in a special ratio for a flatter torque curve, which maximizes accuracy throughout for the full 90 hours. The Angelus A100 movement in the U10 Tourbillon Lumièr

Even the movement plates are designed for efficient manufacture, and feature clean, modern, minimalist lines. The movement is in maillechort, and is rhodium plated. The finishing is also rather non-traditional. The main plate is satin finished with a laser engraved pattern, the bridges are somewhat darkened and also satin finished. Traditional anglage is applied to the edges, On the dial side, a sun-ray satin finish is applied. A circular satin finish is applied to the wheels and screws are bevelled and the screw heads are mirror polished. Overall finishing is rather industrial in nature rather than a more traditional artisanal approach with beauty and decoration as the intent.

On the other hand, the tourbillon cage seems to get a nice finish. The cage is flying, meaning it is anchored only on one side and does not have a traditional bridge supporting the upper pivot. The cage is beautifully anglaged, and polished to a rather high degree. 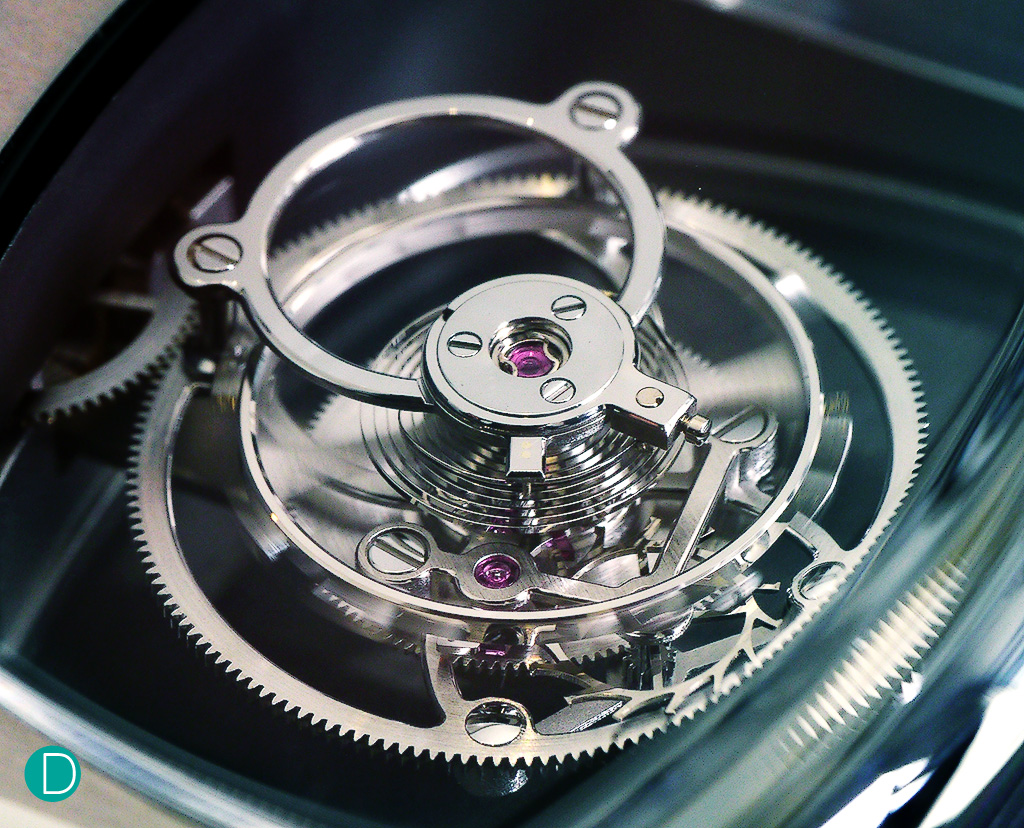 Closeup of the tourbillon. The flying tourbillon construction is very well done. The cage taking a minimalist, modernist approach of the case to another level.

The watch is a rather fresh approach in design. Totally very modern and avant garde. And in that respect, we totally appreciate it. The small touches like taking design cues from the cause of their earlier demise is also quite a nice touch of irony. Mechanical watches now thrive against the quartz, while it was feared the entire industry would be wiped out by the electronic industry. In parallel, as a snub to history, Angelus now is revived, and survives in spite of the quartz crisis, and takes its own spoils from the era by the design cues. Neat! On the wrist, the Angelus U10 Tourbillon Lumière is rather comfortable. Measuring some 62.7mm x 38mm x 15mm, it is rather large, but remains well behaved on the wrist. We thought it would be a nicer design touch if the tourbillon and the dial were swapped, so that at a slight lift of the sleeve, one can tell the time.

The movement construction is brilliant and well conceived. A deconstructed tourbillon is a nice touch. But the finishing is not top drawer and La Joux Perret is not playing the traditional finishing card, but perhaps rather a more brash, industrial approach. Perhaps fittingly so, in the face of the 1970s industrial design.

We are at two minds about the Angelus U10 Tourbillon Lumière. On the hand, its a brilliant design. On the other, it somehow lacks the je nais se qua of a high end piece, yet it is priced at the upper range of the market. It is perhaps too successful in its attempt to take a swipe at the industrial, transistorized era. Perhaps a personality which is too strong.

What do you think? Do you like the watch? Tell us.