We have been quietly following Manufacture Royale since it re-started as a manufacture some 5 years ago when they made splashes in the haute horlogerie world with their Opera. They have extended their collection to the Androgyne and recently a line they call 1770, which suggests the historical lineage of Manufacture Royale to its founding by the French writer Voltaire. The watch for review: The Manufacture Royale 1770 Micromegas belongs to this family. A bit of Manufacture Royale history

The brand was originally founded some 250 years ago by the French writer Voltaire. While Voltaire may be famous for his works of satire, but he is also relatively unknown to the non-French speaking world for being a brilliant entrepreneur. In 1770 Voltaire opened his watchmaking workshop in Ferney, near Geneva. It quickly became quite successful by supplying watches to nobility across France. The house was famous then for incorporating complications like striking works (hence the first product was the Opera which is a minute repeater tourbillon). Jean-Antoine Lépine worked in those workshops, and in all, the records showed that they made some 4000 watches.

From these rather interesting origins, the manufacture was revived by the Alexis Gouten, David Gouten and Marc Guten in 2010. We spent some time chatting with David Gouten when he was in Singapore recently, and he stated that one of the goals of Manufacture Royale is to create and imagine timepieces with a non-conformist stance, with interesting complications and at an affordable prices. We will come back to revisit the last point later in this review.

It is interesting to note that Manufacture Royale is a true manufacture,  with technical and creative capacity to develop and manufacture the waches in their own workshops in the Swiss Jura. Supporting the Manufacture Royal collection is only a part of the works done in these workshops, as they are also serve as OEM suppliers to many other brands in the industry.

As we alluded, the first product from this house is the Opera. We will cover the Opera in a Watchscapes article later. From that rather unusual minute repeater tourbillon, comes the simpler watches (less complications) in their Androgyne line which mimicks the strong design elements of the Opera. These watches have a strong DNA with the very distinctive case and lug design, but in the last couple of years have started to work with Eric Giroud to create a watch is more approachable. Eric retained the side tubes which serve as lugs but softened the lines to cradle a round case. And the 1770 collection was born.

Origins of the species Manufacture Royale 1779 Micromegas in titanium with a white dial.

It is interesting to note that the name Micromégas is taken from the mythical hero’s name from one of Voltaire’s short stories. In this tale, a 40,000m tall giant sets out to explore space after being expelled from his own planet, Sirius, as punishment for his dissenting ideas. After visiting Earth, and having observed the arrogance and ignorance of its inhabitants, Micromégas concludes that dialogue and tolerance are the keys to living in harmony. He points out that our views are only relative and that we must be willing to change our perspective on things.

Manufacture Royale took inspiration from the story and gave rise to the idea for a two speed double flying tourbillon, and called it their Micromegas. The name is a rather oxymoron coalition of two words, Micro meaning small and Mega meaning big. The double tourbillons. The left tourbillon makes one revolution every 6 seconds (fast!!) and the right one is a regular one minute tourbillon.

From a technical viewpoint, the complication is rather interesting. Two tourbillons connected by a differential is certainly not a new concept in haute horlogerie. We have seen examples of this in various Greubel Forsey pieces and also in the Roger Dubuis Excalibur Double Tourbillon. Breguet have also a Double Tourbillon and and Blancpain even have one with one tourbillon and a carousel in one movement. But to have two tourbillons, both flying and each cage rotating at different speeds is a new high. A visual spectacle. 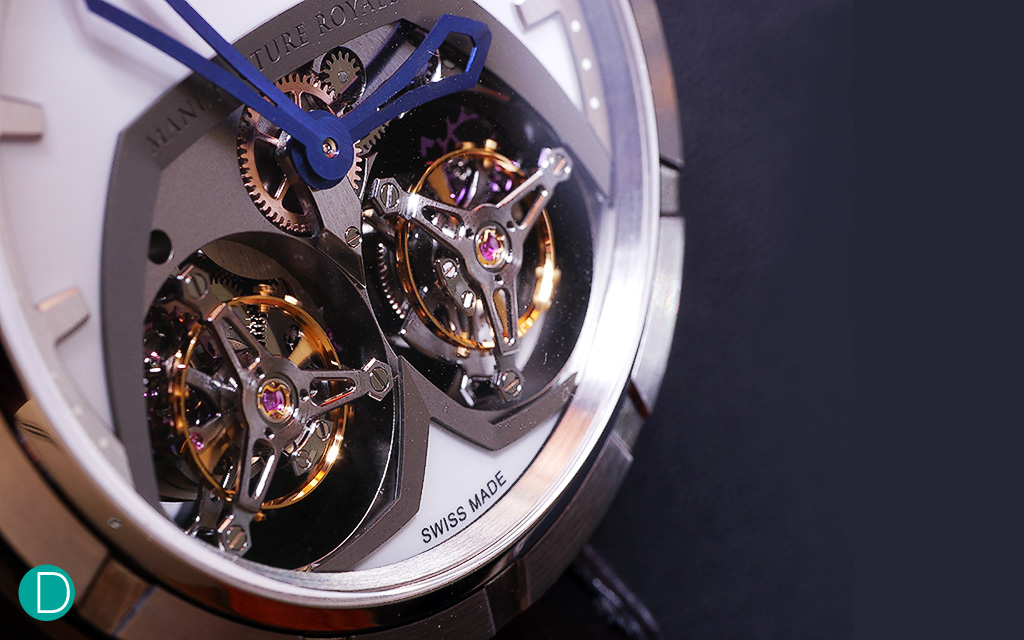 Another view of the double tourbillons.

The left cage makes one revolution every 6 seconds, and the second cage is a more classical tourbillon which makes one revolution every minute. The two are connected upstream in the power flow to a differential which draws its power directly from the barrel. Both regulating organs have access to the same source of power, and can rotate at different speeds due to the differential. The MR04 movement with a full sized skeletonized rotor on ball bearings. Power reserve 80 hours. The case design can be seen here: the twin tubes which extend to become the lugs are seen hugging the main case which is round. The tubes are affixed with screws to the case main body. Also visible in the photograph is the green silicon anchor.

The movement is automatic winding, with the rotor turning on ceramic ball bearings. The power reserve is 80 hours which is quite respectable, especially considering that there are two tourbillons and one of them makes one revolution every 6 seconds. Tourbillons require more power for the cage rotates on its own axis, and the faster the cage rotates, the more power it requires.

As mentioned, the case is designed by Eric Giroud. The very strong straight lines of the Androgyne collection is softened. 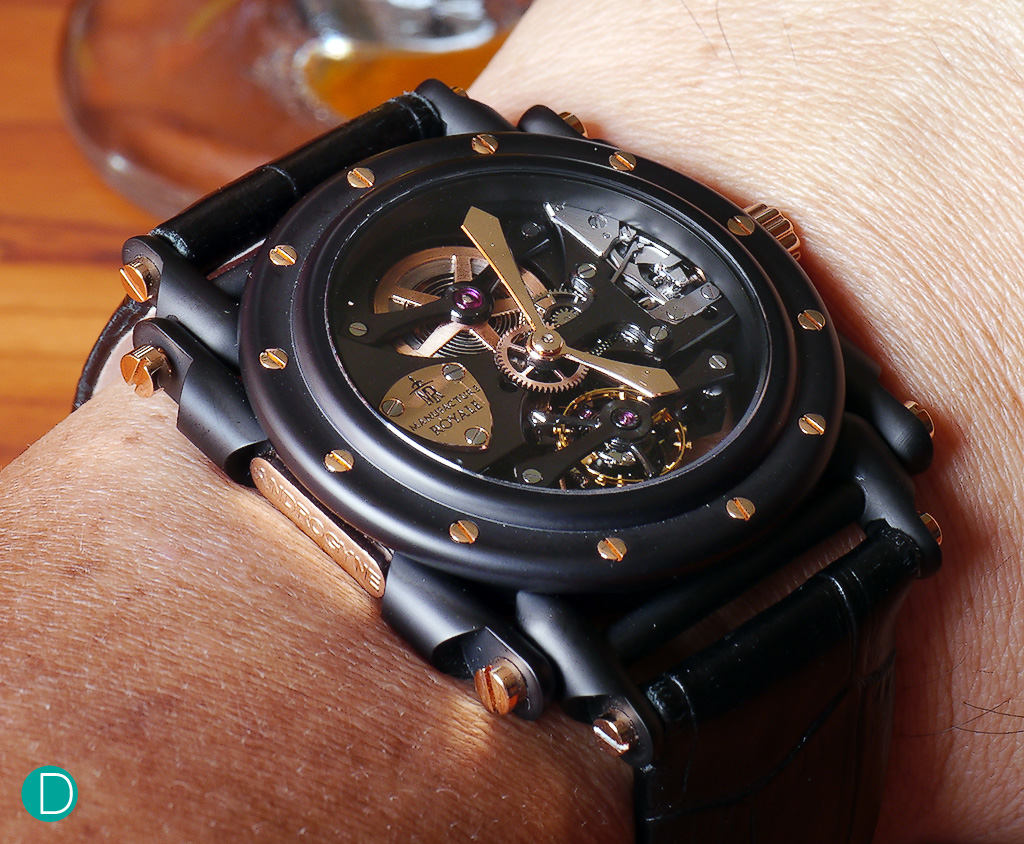 Manufacture Royale Androgyne in black pvd titanium and rose gold case. Note the strong, straight tubes which form the sides. In the Androgyne, these tubes are screwed to smaller tubes which can articulate and serve as lugs.

The Androgyne case design utilizes a set of short tubes to form the articulating lugs attached to a main pair running down the case sides. These tubes serving as the side panels to the case and also as the lugs on both ends. In the 1770 case, Eric has elected to reuse the concept of twin tubes running by the side of the round case. To soften the look, the tubes are curved, and hug the central section and extends to become the lugs. The tubes are held to the main case by what looked like custom hex nuts. The bezel now features slots cut into them to look like cogs, while the Androgyne is a very strong, steampunk like look with the screws visible on the bezel.

The entire look and feel of the watch is much softer, and the watch appears to be more approachable, while retaining the elements of the strong Manufacture Royale DNA.

The case and dial is treatment is quite complex. The angles and straight edges blend with curves which are specified to different finishing levels. A confluence of polished surfaces and edges meet with matt finished ones. This requires a more complicated manufacture and a much more refined look of the watch. The titanium dial is rather small as it features a huge cutout to showcase the two tourbillons. The dial is available in either a black rubber-like varnish or white in the titanium cased versions and a black with Geneva Stripes finishing on the rose gold. The usual SuperLuminova  is used for the markers and Titalyte as a coating to make the titanium dial tougher. The hands are in titanium and blued for the titanium cased models and in rose gold for the rose gold model. On the wrist, the watch is comfortable, and slips under the cuffs for an unobstrusive, discrete style.

We would describe the overall finishing to be competent and achieves its target goal of a high engineering finish. On close examination of the movement, it is clear that Manufacture Royale is creating the watch to meet a specific price point and are not able to luxuriate in a high level of decorative finishing. This will not rival Patek Philippe or Lange. But will give a good run for the money for the likes of IWC, Hublot and Zenith

We feel the Manufacture Royal 1770 Micromegas is a bold statement product from the rather young company. It makes waves, like they did with their Opera by causing us to look at the norm in haute horogerie from a different viewpoint. As Voltaire did with his anti-establishment lifestyle and had intended in his short story of Micromégas. It is provocative and makes a bold statement, and yet it retains some of the classical and familiar feel of the round case.

At a retail price of CHF125k for the titanium cased Micromegas and CHF150k for the rose gold, it is certainly a rather attractive price. One which we feel take cognisance that the continual escalation of prices is not the answer to haute horologerie. We saw this phenomenal escalation in the late 1990s till the about 2007/2008 when the Global Financial Crisis hit the industry hard. We are only beginning to see some manufacturers take a more realistic view of their pricing strategy in the last two years. Which is a good thing, but perhaps a bit too late. Time will tell.