In approximately 48 hours, many perpetual calendars will jump a digit on the year module. 2016. As the more perceptive of us would realise, that marks the end of the first 15 years of the 21st century. For us, this 15 year mark is a positive pit stop to contemplate on what the watch world has achieved since the millennium. In particular, we are interested to find out if the industry has created new styles, genres and trends in watchmaking. Will we produce a new classic? Which brand is most likely to? As compared to the period of the 60s to 80s, of approximately 20-30 years, and 2000-2015, have we created even half of what was achieved in that period?

The Golden age of Watchmaking

The later half of the 20th century in our opinion, was arguably the ‘Golden age’ for the watch consumer. Ironically, it was a terrible time for the brands which faced many a crisis during this period. Several companies, including Heuer went bust during this time. But for the consumer, the 60s to 80s was the time when most classics and icons of the horology world were born. Prices were reasonable and the products palatable. The competitive environment both between brands and the emerging quartz threat forced brands to innovate and eventually to produce iconic designs. New models and designs were consistently brought to the table. While many pieces have now been chucked out and forgotten, the short frame of 20-30 years have given the watch world some of the most iconic designs till today. Apart from the emergence of iconic models, there was also widespread development of iconic styles, genres and designs. These were in part created out of necessity and functionality, tool watches like the race watch chronograph, the diver’s watch and the antimagnetic watch. Distinctive features like the raised dome plexiglass, TV cases, the small case sizes, the bullhead, jumping hours, digital display are just some of the iconic styles and designs of the 60s-80s. Other icons worth mentioning include Zenith’s 1969 chronograph, and Rolex’s almost every model.

Now that we have seen the achievements of the more distant past, let us take a survey of more recent trends. In the span of 15 years, have we seen a new iconic model? Or are we stuck at replicating the designs of the past, choosing to update rather than to create? Many of us struggle when asked to identify the icon of the new age. Undoubtedly, there are plenty of new designs, movements and even a new genre that are available today. Prevalent, popular and highly priced. However, finding the definitive classic waters down our choices. The Breitling Exospace 55. Not mentioned in this article is the rise of the smartwatch, though, we find the fad of little significance for the watch collector.

There are a few major trends in today’s watch world. The first trend is to replicate past designs and resurrect homage models. While this is a great way to celebrate tradition and provides an avenue for fans of brands to own a modern rendition to vintage pieces, we are sceptical about the continuity of this trend. In the past, there was relatively less material to work with. A lack of a staple of designs encouraged creativity and the creation of classics. Does the abundance of heritage remove the need to churn new designs and reduce the possibility of creating icons?

The JLC Geophysic True Seconds in rose gold and steel. Not just another homage model, but one which combines tradition with innovation. Heritage inspired models should reinvent itself rather than merely replicate.

The Interactive Watch- A new genre in watchmaking

Especially prevalent amongst independent brands, there is great focus on wearer and watch interaction, for instance the URWERK EMC, which allows the user to ‘self-regulate’ the movement. Also, MB&F’s HM5, HM6 which allow the user to ‘open and close windows’. A side view of the HM6, with the spherical shield closed. It is an intricate feature which helps to protect the flying tourbillon from the harmful UV rays, in which it is detrimental to the lubricating oil in the both the movement and the escapement.

Other forms of interaction include a more visual Mechanical animation- which allows the user to activate a mechanism and watch something happen. Case in point, Jacquet Droz’s Bird repeater and Breguet’s openwork repeater. 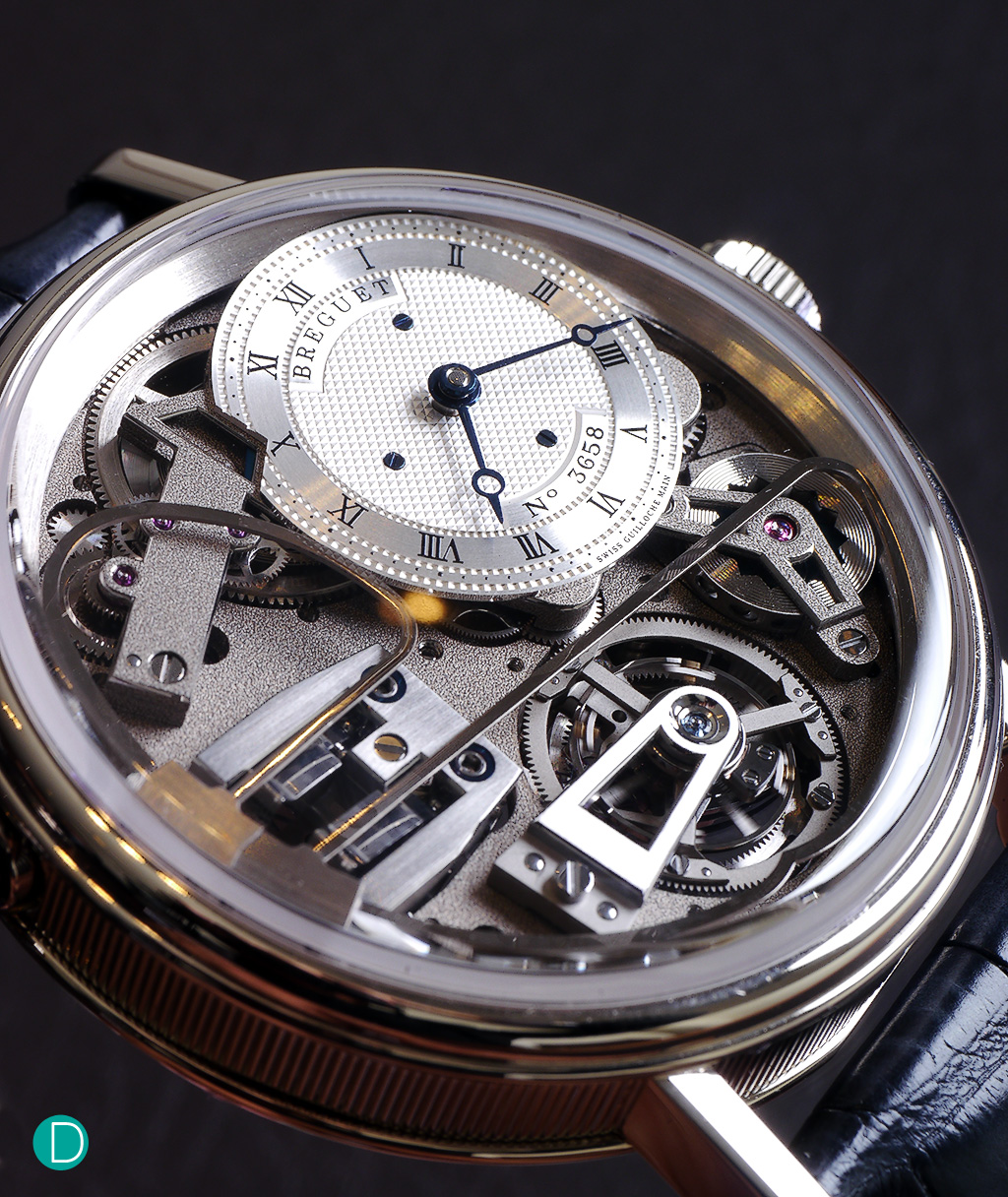 The time display which hardly displays the time

Another trend we have observed is the use of complicated and unconventional time displays. This changes the more primitive concept of outright legibility and function, for a more educated crowd that enjoys intricacies rather than blatant frankness. SevenFriday V2. The dial detail of the V2, showing the 120° angle hour reading. And the additional turning disc. The time is now 5:11:25 am. 4+1 gives the hour. And the minute hand is conventional, making a full 360° turn, showing just past 11 minutes. And the seconds is indicated by the turning disc +20 and 5 giving 25. The HYT H3 uses a rotating 6 hour display and a retrograde liquid tube to tell the time. The turn of the century has also brought about a whole staple of new materials. Brands with good R&D budgets turned to sourcing new case materials. Hublot introduced the fusion concept, a combination of multiple materials on a single case. Notably, brass, bronze, ceramic and forged carbon are increasingly popular today, and at multiple price points.

From this survey, we have established that the modern watch world has its own ‘zeitgeist’. But a question remains unanswered. Which is the definitive icon of our time? We have two schools of thought.

Iconic models are usually only appreciated from hindsight. They tend to be unpopular and even disliked at the onset. For instance, the Rolex Paul Newman Daytona. So an icon of today determined by readers of the future, could possibly be the ugliest and most revolting watch you currently see. That said, a recurring sentiment amongst collectors in our circle find that finding the icon can be derived through Kantian reasoning. Pardon the German allusion to our choice- we find that the most plausible modern watch icon is the first edition 1999 Lange Datograph.

What is your iconic timepiece?