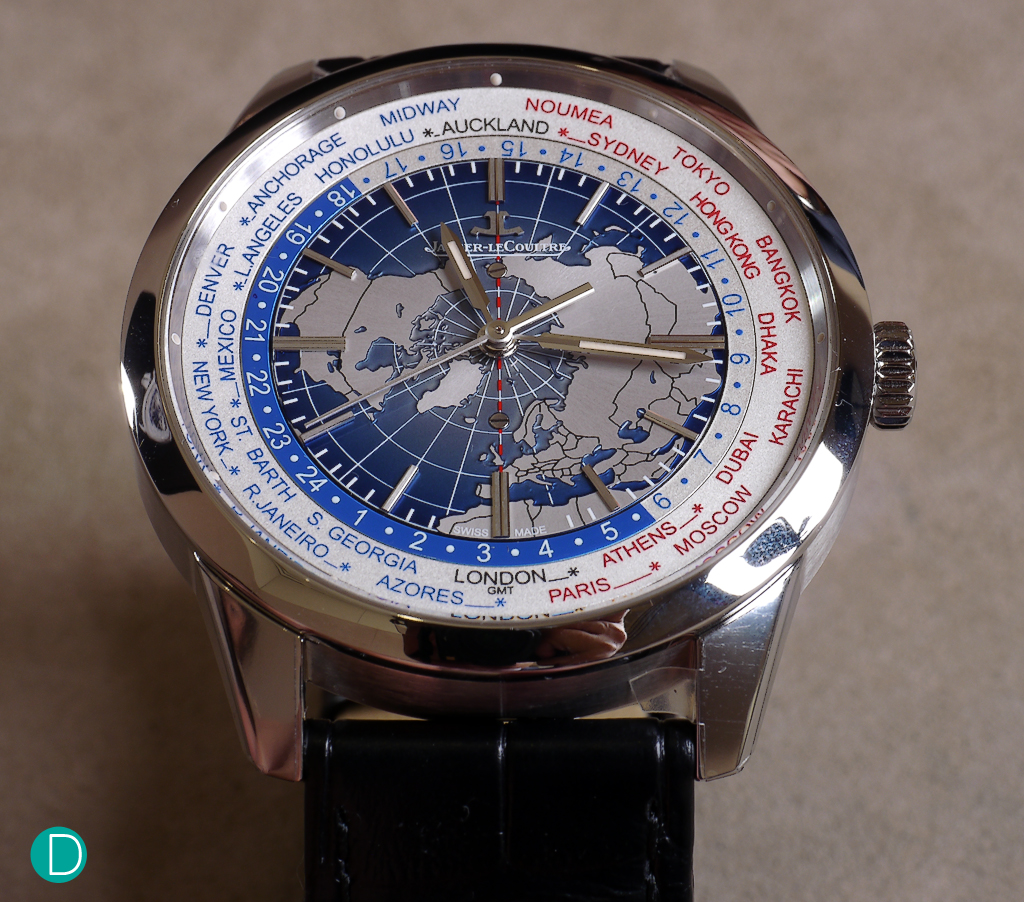 We carried a detailed review of the amazing Jaeger LeCoultre Geophysic True Second earlier. While many have been enamored with the JLC Geophysic® Universal Time under review here, we were captivated by the beauty and seduced by the apparent simplicity of the True Second. We return now to review the Geophysic Universal Time.

To grasp the marvel of the Geophysic series, we request you to read our earlier review of the True Second.

In that article, we look at the very interesting Geophysic history, and fully explain how the True Second mechanism works. We think this is essential reading because the same True Second system is used in the Geophysic Universal Time. JLC Geophysic Universal Time in pink gold. The dial features an engraved motif of the map of the Earth. continents in pink gold, and a magnificent blue lacquer for the oceans.

At first glance, the beautifully engraved continents and lacquered blue oceans on the dial beckons. Two versions are offered. One in Pink Gold as shown in the photograph above, and one in Stainless Steel as depicted in the photograph below.

We find that although there is a lot going on on the dial, with the continents and oceans, a UTC dotted line in red, the cities on the outer edge of the dial as well as day/night timezones, the dial is a very legibile. The markings are very clear, and the colors chosen have a particularly pleasing aesthetic.

Universal Time in use

The usage of some world time watches are quite complicated. Many come with dual crowns, and complex procedures to set the home time and local time. One classic example is the Andersen Genève Tempus Terrae which we reviewed here. But others are more complicated and although easily learned, the process does take several steps and in comparison, the operating model of the Geophysic Universal Time is a model of simplicity. The time is set with the crown (there is only one!) and once set, the timezones across the world is in sync and there is no need to adjust it while travelling cross timezones. Only on arrival, local time is set by the crown (yes, same crown) by moving the hour hand forwards or backwards, independent of the minutes and seconds. The case measures 41.6mm diameter on a 11.84mm thick case, and is slightly bigger in both dimensions versus the True Second’s 39.7mm diameter, 11.7mm thick case. JLC C.772 powers the Geophysic Universal Time. The movement runs at 28,800 bph with a power reserve of 40 hours.

As with the JLC C.770, the C.772 is a rather thick movement, measuring 7.13mm in height which makes it very robust. We expect it to be very reliable as with all JLC movements, and the finishing level is excellent. All the traditional finissage elements are executed well. Prominent are the beautiful blued screws and the expertly executed anglage.

We find this JLC Geophysic Universal Time an alluring proposition. World time watches are not exactly new, nor are they rare. But this is perhaps the only one with a seconds morte mechanism, which adds to its charms. The magnificent beauty of the dial, its supreme legibility and the straightforward operating mode is another big plus. As well as the price. The pink gold version retails for S$36,900 and the stainless steel version goes at S$21,900 with Singapore GST. Of the two, the value for money, bang for the buck vote goes to the steel version.