We take a closer look at the Richard Mille RM 27-02 which was first premiered in Roland Garros 2015. Famously worn on the wrist of Rafael Nadal, the watch is truly the epitome of sports watches as of this moment. Anyone who knows mechanical watches or watches in general can certainly comprehend that shock to a watch is like an earthquake to a wooden hut. Destructive and when at certain magnitudes, tantamount to utter destruction. Clever though, Richard Mille tears at this conventional obstruction to timepieces and produces the RM 27, fit for play even in the toughest of earthquakes, on the wrist of Rafael Nadal, arguably one of the world’s best tennis players.

In the spirit of sports and its quest for speed, here’s a quick summary of the RM 27-02.

It is light. Extremely light, at under 19 grams, the weight of 3 x SG 1 dollar coins. It is strong. Extremely strong and built to withstand shock of up to 5000Gs. It is expensive. Extremely expensive (for most). Priced at CHF 734,500, more than S$1 million.

Weighing under 20 grams, the RM 27-02 is so light that Nadal has said it becomes part of his skin.

The lightness and shock resistance of the watch makes the RM 27-02 the perfect sports watch. It measures 47.77 x 39.7 x 12.25 mm; the case so ergonomically proportioned that Nadal says he hardly knows it’s there. A large part of its lightness is credited to the high tech materials it uses.

The base plate is machined from NTPT carbon fiber which is made from several layers carbon filaments made from separated carbon threads, and TPT quartz which consists of multi layered quartz filaments. These materials were jointly designed by Richard Mille in partnership with North Thin Ply Technology (NTPT). The bezel and case back and base plate are all crafted in this carbon fiber and quartz material. With all three pieces connected via 12 titanium spline screws. The RM 027 RN also uses materials developed by NASA that are new to the watchmaking industry such as LITAL, an alloy of aluminum, lithium, copper, magnesium and zirconium. All of which an effort to keep the watch light and strong.

Apart from the novel lightweight and strong shock resistance, the watch also houses a tourbillon complication. It is sized at 12.3 mm in diameter with a ten-millimeter Glucydur balance wheel and oscillates at a frequency of 3 Hz (21,600 vph). The manual winding movement has a 70 hour power reserve. A close up shot featuring the excellent finishing of the tourbillon escapement and bridge parts. The movement has a 70 hours power reserve and oscillates at 21,600 vph.

As with Richard Mille’s cooperation with Felipe Massa, Rafael Nadal himself was part of the experimentation process to build the RM 27. Often times his practice sessions would be monitored with movement sensors and shock sensors attached to his arms to find out the necessary adjustments for the watch. It is said that Rafael Nadal’s serve alone measures 800 to 1000 Gs. 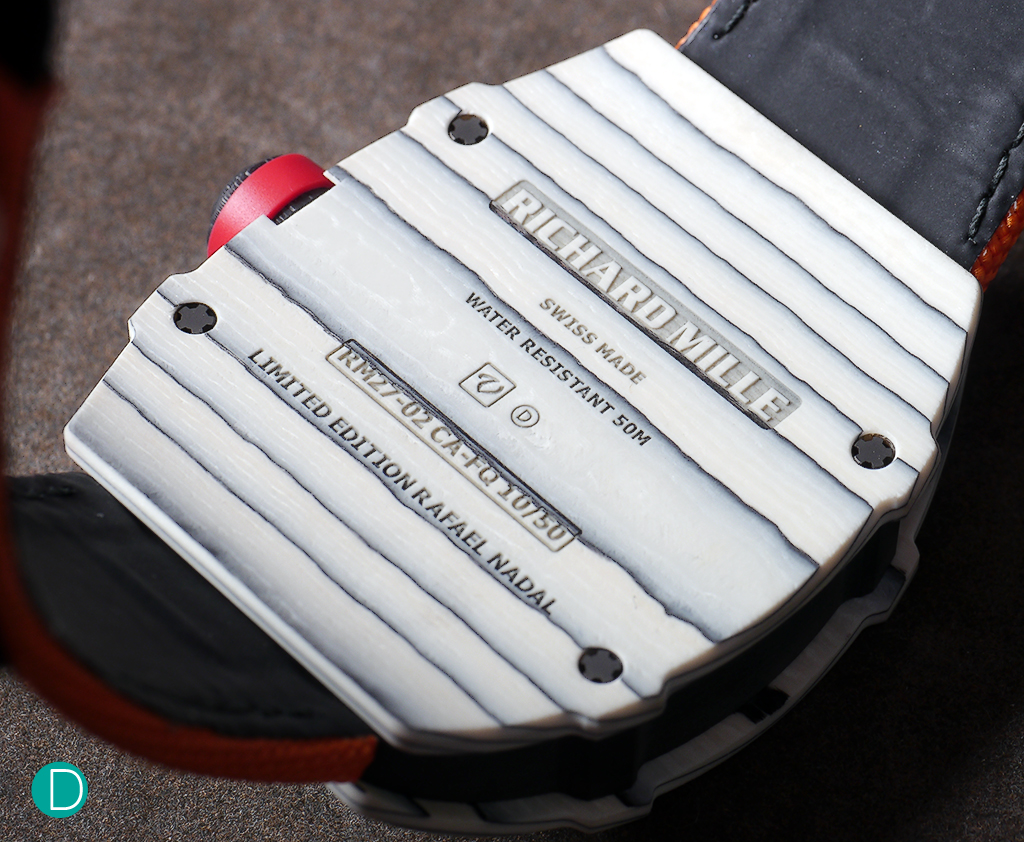 Caseback featuring the NTPT materials, of forged carbon fiber filaments with quartz. Peter Chong first remarked ‘The case is like paper, each with its own special texture, very unique.’

During the testing phase in 2010, Nadal broke at least six of the original watches, various problems arose due to flaws in case construction. Bear in mind however, that the watch was worn all the time from training to the showers, and was thus exposed to shock, heat and moisture. Not the toughest of conditions but trying nonetheless. The main concern for the watchmakers however, was how well the movement stood up to shock. Nadal wears his Richard Mille tourbillon on the right wrist, that while his master hand is the left. So potentially, less force is exerted on the watch relative to having it on the left wrist. But he also uses a two handed backhand and is well known for high velocity hits and thus the watch wounded up being built on a series of shock absorbers. It is said, by Mille and Nadal, that the final model that he wears to the matches continues to keep good time despite the high stress on the watch. Limited to 50 pieces, and priced at more than S$ 1 million, this sports watch is likely to be the most expensive timepiece made from ‘plastic’ and  ‘crushed materials’. It is undeniably pricey for most and we have heard some collectors disdain over the brand’s ‘fashion’ status. Nonetheless, we would not go all socialist and discuss the insanity of consumerism. After all the RM 27 is a great watch that many would love to have, for what it stands for, breakthroughs in watchmaking and also the simple joys of having a nice sports watch.