Come next Wednesday, United States will elect their 45th President. Who will head one of the greatest countries in the world? Will it be Donald Trump, or Hillary Clinton?

Of course, this will be an interesting election. After all, these two candidates have their own fair share of controversies. However, with the escalating tensions, we reckon that it will be good to take a break from politics. Hence, for this week’s article, we think that it’d be interesting if we focus our Throwback Sundays article on what watches a President should wear. Just for fun.

While it may be a seemingly easy task to pick out six watches, reality is much tougher than that. We reckon that in order to qualify, the watch needs to be discreet and yet good looking. This requires a bit of a balance – it should befit the status of a President, and yet it should not be too bold or ostentatious. Complications that are functional are greatly appreciated as well.

So, what have we selected for this week’s article? Let’s find out! The Rolex Day Date 40. Also known as the “President’s Watch”.

When it comes to watches that are synonymous with Presidents, the Day Date is perhaps one of the watches that is most often associated with the head of states. This is not surprising, considering that Presidents such as Lyndon Johnson had actually wore one when he was in the Office. However, the term “Rolex President” is referred to the unique bracelet that is fitted onto the Day-Dates, and not the watch itself (a common misconception). The actual origin of the nickname is not well-documented, although some sources cited that it was due to the connection with Dwight Eisenhower.

Moving on, we think that the Day Date is an excellent candidate for a President’s watch. Its functions, which includes a day and date indicator, is pretty helpful. On top of that, Rolex’s are renowned for its quality and robustness. It is also not too ostentatious, provided if the watch is cased in either white gold or platinum. Unlike its Everose or yellow gold counterparts, the platinum or white gold Day Dates do look more discreet and elegant.

The new Day Date 40, cased in platinum, retails at S$ 84,500. It still retains its old-school charms, but with a larger case (40mm) and an updated movement (Calibre 3255). Is it fit to be a President’s watch? We do certainly think so! 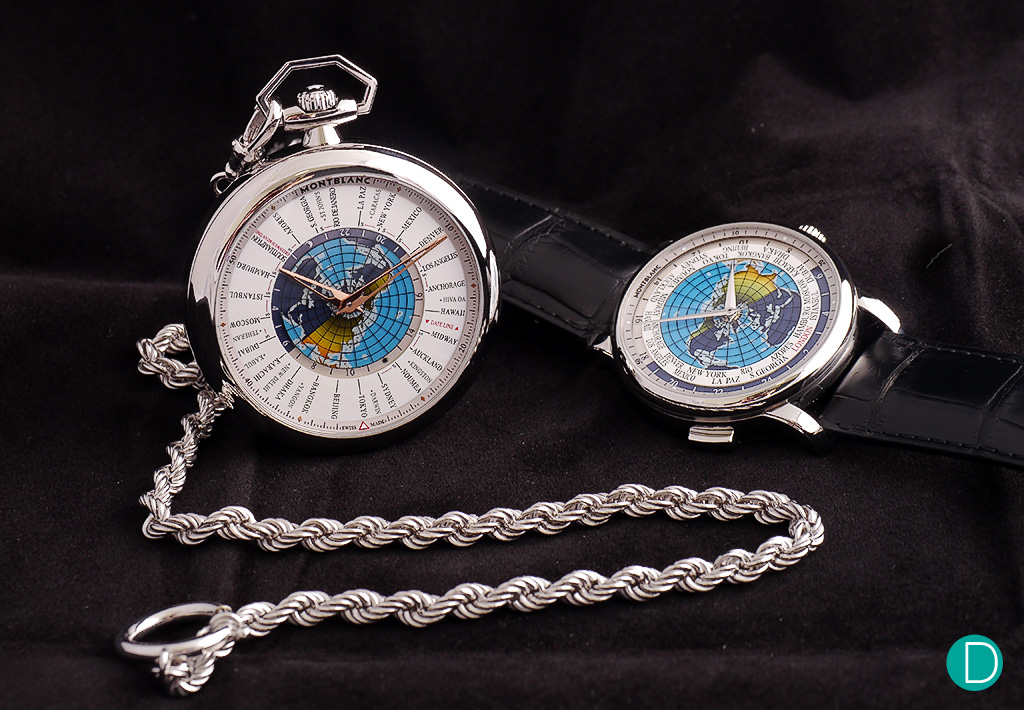 For a politician, one of their main job requirements is to establish international relations. In fact, politicians are constantly in communication with their counterparts overseas. This is very important in today’s age, especially with the globalisation and the rise of communication technologies.

Bearing that in mind, a World Timer might be something that will come in handy for such people. The complication, as suggested by its aesthetics, allow the user to establish the timing at the various time zones around the world. The Montblanc 4810 Orbis Terrarum is one of the watches that offer such function. What makes this particular watch a stand out is its value proposition – priced at US$ 6,300 (approximately S$ 8,714), the 43mm 4810 Orbis Terrarum features an automatic movement that is fitted with an in-house world time module. It displays 24 different time zones simultaneously, and it is a day/night disc to indicate if a particular region is currently in day time or night time. In addition, the adjustment of the destination city is intuitive as well since it can be done by pressing the pusher at the 8 o’clock position.

Overall, we think that the price point and practicality of the 4810 Orbis Terrarium makes it a rather appealing timepiece. It is definitely a useful tool for any Presidents, and a good looking one as well. The Perpetual Calendar is a complication that never fails to excite us. Over the years, we have seen watches with a variety of complications, but there are not many that impresses us as much as a perpetual calendar.

The JLC MUT Perpetual Calendar is one of our top picks for a Perpetual Calendar watch. While it has recently lost its title of “most affordable perpetual calendar”, thanks to Montblanc and Frederique Constant, feel the JLC is still great value-for-money. The watch is fitted with JLC’s in-house Calibre 868, which is an automatic movement that boasts a power reserve of around 38 hours. As mentioned, it features a perpetual calendar complication, and that does not require any manual adjustment from the user until 2100. The finishing is also done rather nicely too, with the skeletonized gold rotor adds a nice touch to this timepiece.

We particularly like how the JLC MUT Perpetual Calendar looks. It is clean and relatively uncluttered, which is a surprise considering that the watch has three different subdials, as well as a moonphase indicator. Priced at S$28,000, we feel that this is a reasonable price for a timepiece of such calibre. It is definitely a piece that we reckon is worthy and practical for the head of the state.

Moving on, we have something from Japan: Grand Seiko.

Grand Seiko is one of the brands that we have always adored. We have often waxed lyrical about the quality of its finishing, as well as the price proposition that it offers. There aren’t many watches out there that can compete with Grand Seiko on these aspects.

The Hi-Beat 36,000 GMT is perhaps one of the watches from Grand Seiko that is most suitable for a politician. The watch is functional, with useful features such as a date display and a dual time zone indicator. It is also rather well-finished, as per the usual Grand Seiko standards. In addition, its handsome good looks give the watch additional brownie points as well. Best of all, it is super discreet – after all, Seiko is often associated with modestly-priced watches. This will certainly sit well with critics who are critical on the expenses of politicians. We then turn our eyes to the German side of the house, with Glashütte Original’s Senator Cosmopolite.

The Senator Cosmopolite is a more wallet-friendly version of the original Glashutte Original Cosmopolite Tourbillon. The latter is an incredible timepiece, but although perhaps not of a President’s budget, but possibly wouldn’t do well in the understatement department. The Senator Cosmopolite is a toned-down version, but an impressive one nonetheless. The main highlight of the watch is probably its dual time zone display, in which it can switch between 37 different time zones (which include those with half hour or quarter hour differences) in either Daylight Savings Time (DST) and Standard Time (STD) format. On top of that, the watch is chockfull of other functions, such as a day/night indicator on the second-time zone, a big date indicator, as well as a power reserve display. This is achieved with the in-house Calibre 89-02, featuring a double swan neck arrangement and a respectable power reserve of 72 hours.

All these comes at a price though – the 44mm Senator Cosmopolite is retails at S$67,400 for the rose gold model, and S$70,200 for the white gold variant. While it might be the priciest timepiece on our list today, but we reckon it is a darn good and functional timepiece, with the capabilities to beat the Swiss at their own game of haute horlogerie. Finally, we round up the article from yet another timepiece from Germany. Cue the A. Lange & Söhne 1815.

There are a number of excellent dress watches out there, with pieces such as the legendary Patek Philippe Calatrava and the splendid Vacheron Constantin Patrimony. However, for this week’s article, we have selected one of the most underrated and overlooked timepieces in the world of fine watchmaking – the 1815. The watchmaker, in recent times, had gained traction with many collectors. The Zeitwerk and the Datograph, are just some of the watches from the watchmaker that had bewitched many of us. The simple 1815, is sometimes overshadowed by its siblings. The 1815 packs a big punch as one of the best dress watches that money can buy. Design and finishing are top drawer. The movement is done up immaculately, with the usual highlights such as the engraved balance cork and the three-quarter plate.

The 38.5mm timepiece is one of the watches that we reckon will look perfect with a suit. It is slightly on the pricier side, at S$48,300 for the limited edition honey gold case with a special finely textured argenté-grainé dial. You can definitely not go wrong with this one.

The watches in this week’s list are slightly on the pricier side – no surprises though, considering the power and the status of Presidents. A good wristwatch, and one with functional complications, is something that will befit a person with such great powers and responsibilities. It should look good with their suits too, and hence we have selected a few dressier watches that will go well with business attire.

Besides some of the watches that we have selected, we understand that some politicians do own some interesting pieces as well. The Vulcain Cricket is one example, considering that it was a timepiece that was given to some of the POTUS, which includes Bill Clinton, Harry Truman, and Lyndon Johnson. Bill Clinton, notably, is a fan of fine timepieces, and he is seen wearing several exquisite pieces which include A. Lange & Söhne Grosse Langematik Gangreserve and Jules Audemars Chronograph. The former President of Mexico, Porfirio Diaz, owns the Girard Perregaux “La Esmeralda” – the original, historical pocket watch with 3 golden bridges. Former President of France, Nicolas Sarkozy, as well as Russia’s Vladimir Putin, are connoisseurs of fine watches as well, with the two have been known to own Patek Philippe watches. Putin is als known to wear a Blancpain Aqua Lung,and A. Lange and Söhne’s Tourbograph while conducting business as President/Prime Minister.

So, what are some of the watches that you reckon a President should wear? Let us know in the comments section below, and till the next article, cheers!