This weeks Spot the Watch features Bill Clinton, the 42nd President of the United States.

Mr Clinton has a collection of watches, that range from simple time only pieces to chronographs.  The former president has two Panerais.  A PAM 89 Luminor GMT in Titanium and a PAM 282 Radiomir Black Seal in Ceramic.  These have been featured quite often elsewhere, so we decided to focus on the watches that have gotten less attention.

First up is one of our favourite brands Jaeger LeCoultre.  The former POTUS is wearing the Jaeger LeCoultre Master Compressor Alarm Navy Seals.  This watch has the cool factor since it features an alarm complication. The user can set the alarm to go off, at a predetermined time.  Not sure it goes that well with a suit though. Now from a Swiss brand to a German brand. The model in question is the A Lange & Sohne Grosse Langematik Gangreserve.  A limited edition model made for Wempe to celebrate 100 years of the founding of Chronometerwerke Hamburg, which became Wempe Chronometerwerke in 1938.  Mir Clinton’s watch is one of 100 made in platinum.  This watch certainly looks good with a suit.  We were the first people to notice the watch on Mr Clinton’s wrist in a picture while browsing on Google Images.   Interestingly US Investor Carl Icahn also has a Gangreserve.  He was featured on the cover of TIME magazine wearing it. Now onto a watch that has been associated with U.S Presidents before.  The Vulcain Cricket.  This is well known for also having an alarm complication.  U.S Presidents in the past have been gifted one.  This tradition continues with the current U.S President Barack Obama receiving one, when he entered office.  We stumbled across this photo of Bill Clinton wearing a Vulcain Cricket.  We cannot be 100% sure if this was the exact piece gifted to him by Vulcain. After a little more searching we found a side on shot, giving a clearer view of the watch on the wrist. We do apologize for the strained facial expression! 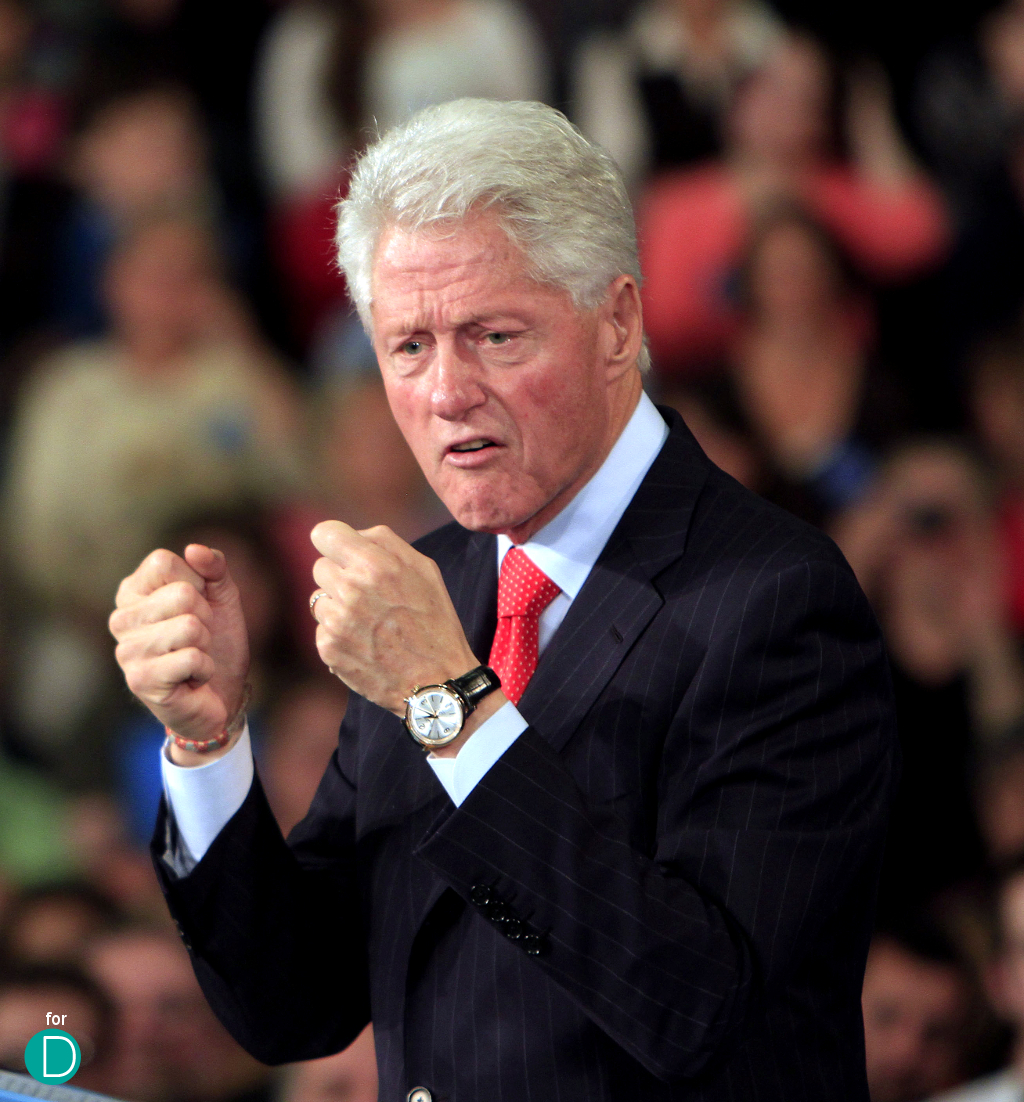 The Vulcain Cricket on the wrist of Bill Clinton.

The final watch featured is from a company in the United States of America.  It is a relatively new company called Shinola. They source movements from overseas, but make certain parts of the watch such as the cases and straps in the USA. They hope to make the majority of parts in the USA.

Mr Clinton wears a Shinola Runwell model in the photo below. He visited their factory in 2014 and later that year bought 14 of their watches to give as gifts. We found a video of him talking about his purchases.

We hope you have enjoyed this instalment of Spot the Watch.