One thing that impresses us about the Japanese would be their great attention to intricate details. The integrity of their efforts are telling- products from Lexus and Canon can easily testify that. But of course, when it comes to watchmaking, there are not many watchmakers that are close to matching this particular brand with regards to both quality and value: Grand Seiko.

We have always liked to compare Grand Seiko watches with Lexus cars. There are so many things that are common between these two giants. They are both, obviously, Japanese-made products. But the crux is this- they are Japanese’s answer to high-end European and Western products. You see, there is always this perception that Asian products are inferior and their qualities can never be on par with the Westerners. And the aims of these two giants are simple: to prove to the world that the Asians are capable of achieving, and to beat the Westerners at their own game. The rest, as we all know, is history. The SBGJ003, also known as the Mechanical Hi-Beat 36000 GMT with the black dial.

One of the models that was launched recently this year is the Mechanical Hi-Beat 36000 GMT. Upon seeing the watch, two things come to mind: it looks a little spartan, and it is similar to some of the other Grand Seiko models. But that is the style of a Grand Seiko model. It is elegant, simple, and subtle. The differences are inconspicuous to an untrained eye, but trust us, this is a totally new watch. And we will show you how. The Grand Seiko SBGJ005. This one comes in a dark green dial, and featuring a golden “GMT” hand.

First and foremost, we would like to reiterate the subtlety of the watch once again. And this can be clearly seen from the position of the 24-hr indices. Unlike the predecessors, the 24-hr indicator of this GMT watch is located at the edge of the dial. This adds a classier touch to the timepiece, without making it too cluttered or messy.

As for the quality of the watch, it is quintessentially Grand Seiko standards. The case of the watch is brilliantly polished with both brush-finishing and mirror-finishing. The effects are profound, and it is further improved by the designs of the 44GS casing.  The finishing of the dial is exceptional as well, since Grand Seiko is able to add texture into it seamlessly. The end-product is akin to a symphony, where different elements of the watch complements each other beautifully. 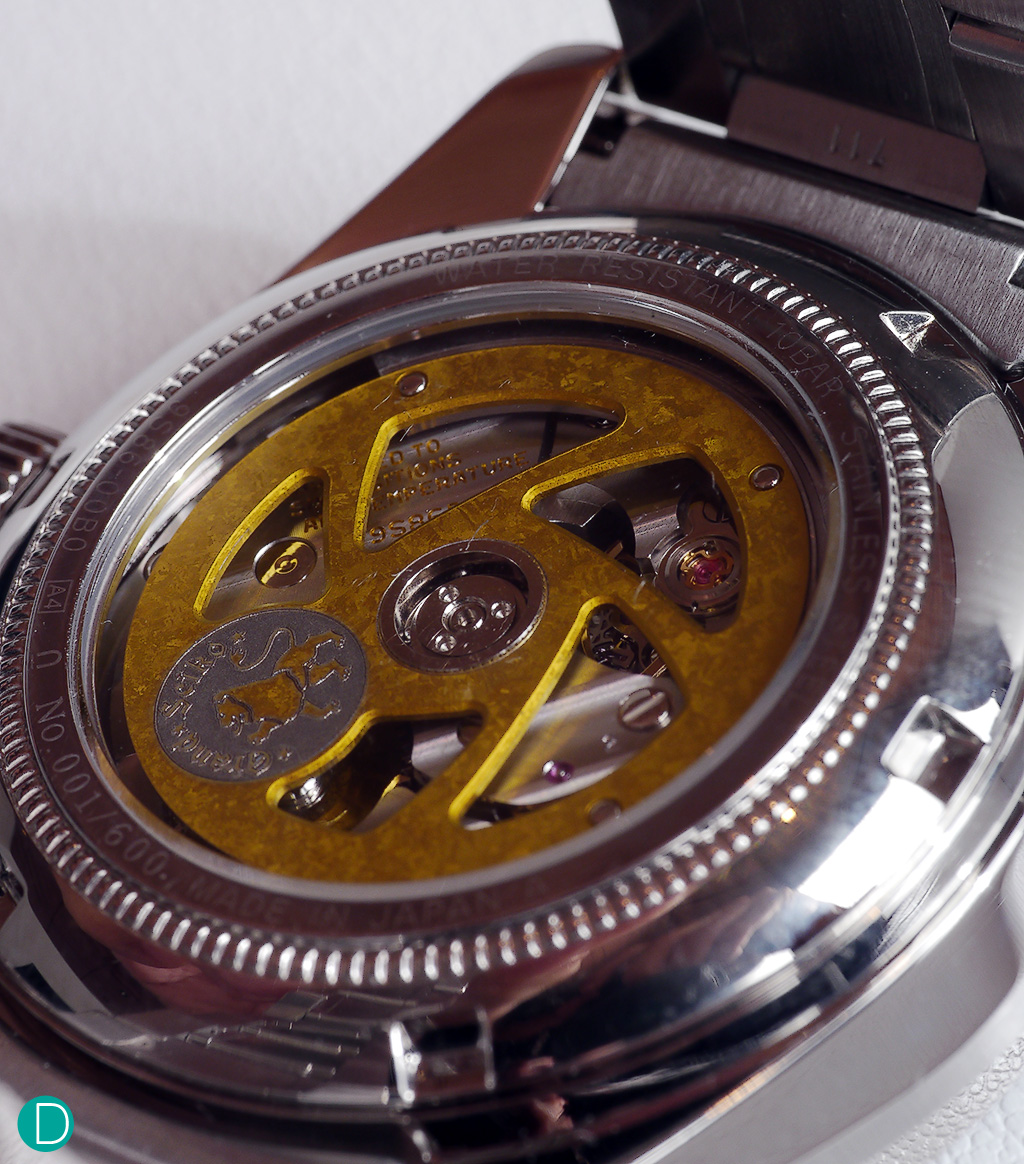 A caseback shot of the new Mechanical Hi-Beat 36000 GMT. The watch is powered by the newly-introduced Caliber 9S86.

The Mechanical Hi-Beat 36000 GMT is powered by the new Caliber 9S86, with a power reserve of approximately 55 hours. A highlight of the new movement would be the oscillating weight. The golden tone of the oscillating wheel is created through the process of anodic oxidation. In this process, the titanium oscillating weight undergoes electrolysis to generate oxide film. This film produces colour, according to the light infraction index. The kind of colour produce would be dependent on the thickness of the film. But the end result is certainly staggering. The golden tone of the oscillating weight is simply astonishing; it just bought the watch up by a few notches. A testament to Grand Seiko’s ingenuity and taste.

That aside, another feature of the watch would be the GMT feature. Yes, a GMT feature is not really something impressive, but it is Grand Seiko’s first GMT with a 10-beat caliber. This provides greater accuracy, since the watch has beats 36000 times in a hour. Also, the wearer is able to change the hour hand independently, without having to hack the second hand. Very minute details, but Grand Seiko are just too fussy about things like this. The SBGJ001. Just simply look at the dial. Speechless.

The Grand Seiko Mechanical Hi-Beat 36000 GMT comes in three different variants: the SBGJ001, SBGJ003, and the SBGJ005. The differences are in the dial and hands combination; the SBGJ001 comes with a white dial and a blue GMT hand, while the SBGJ003 contains a black dial and a contrasting red GMT hand. Amongst the three pieces, the SBGJ005 is the most unique one; it is only limited to 600 pieces and it comes with a beautiful green dial and a gold GMT hand.

We personally feel that this Grand Seiko may be one of the finest GMT watches around. The timepiece is essentially a communal celebration of simplicity, style, functionality, and quality. And not many watches, at such a price point, come close to matching what Grand Seiko is capable of delivering. This is definitely something special.