Contents
In this week's article, we take a look at six underrated watches (or collections) from renowned watch manufacturers.
by Robin Lim on August 6, 2017
Reviews
3 likes
4 comments

When we think of certain brands, we normally associate certain collection to a particular watch manufacturer. For instance, the first model that comes to mind when we think of Omega is the Speedmaster. And perhaps the same can be said for the likes of Datejusts and Submariners, when it comes to Rolex. Or Audemars Piguet, and out comes Royal Oak.

Of course, there is nothing wrong about it. There are certain models that are more popular than the rest, for a few reasons. Perhaps it can be due to its provenance, its design, or even the way a certain collection is being marketed. However, this meant that some of the collections are probably overshadowed. And it can be rather unfortunate, as many of them are excellent watches – be it in terms of its design, construction, or even value proposition.

Hence, in today’s article, we will be putting the spotlight on some of these watches. So, what have we selected? Let’s find out! We begin the article with Sinn, and its 356 SA Pilot III.

Sinn is popular watch manufacturer in Germany, and the U1 is perhaps one of the most well-regarded tool watches in the industry. The watch, with its robust submarine steel case and depth rating of 1,000m, certainly can hold up against the likes of the Sea Dweller and Seamaster Proplof.

However, one of the watches that we want to highlight is the 356 SA Pilot III. This particular Pilot Chronograph is attractive in two aspects. First, at 38.5mm, the Sinn is sized rather appropriately – especially for Asians. Next, and more importantly, its price point – with the base model going for US$2,570 (approximately S$3,500) – is excellent too. This is considering that the watch is both anti-magnetic and shock-resistant, and its build quality is great as well. We highly recommend the 356 SA Pilot III for new collectors who want a classic, and yet solid, timepiece. An interesting collection from Omega: the Railmaster.

With the likes of the Speedmaster and Seamaster, and perhaps even the Constellation flying the Omega flag high, it is no wonder that the Railmaster is often overshadowed.

The interest in the Railmaster, thankfully, increased when Omega launched the “1957 Trilogy” series. But it is a largely forgotten collection. And we hope with this spotlight, not anymore. Interestingly, given Omega’s longer history, it was only in 1957 that a version of the Railroad watches were made by the company, with the nomenclature of Railmaster.

The new Railmaster (2017) is reminiscent of the timepiece from that era, with its classic aesthetics and the clever play of using cream-colored luminescence for both the hands and indices. It is also now fitted with an up to date Co-Axial movement – promising greater performance, as well as anti-magnetic properties. The watch is expected to price at US$4,900 (approximately S$6,600), and it is certainly an interesting watch for a collector who is looking for the best of both worlds – in terms of modern day technology, and classic aesthetics. 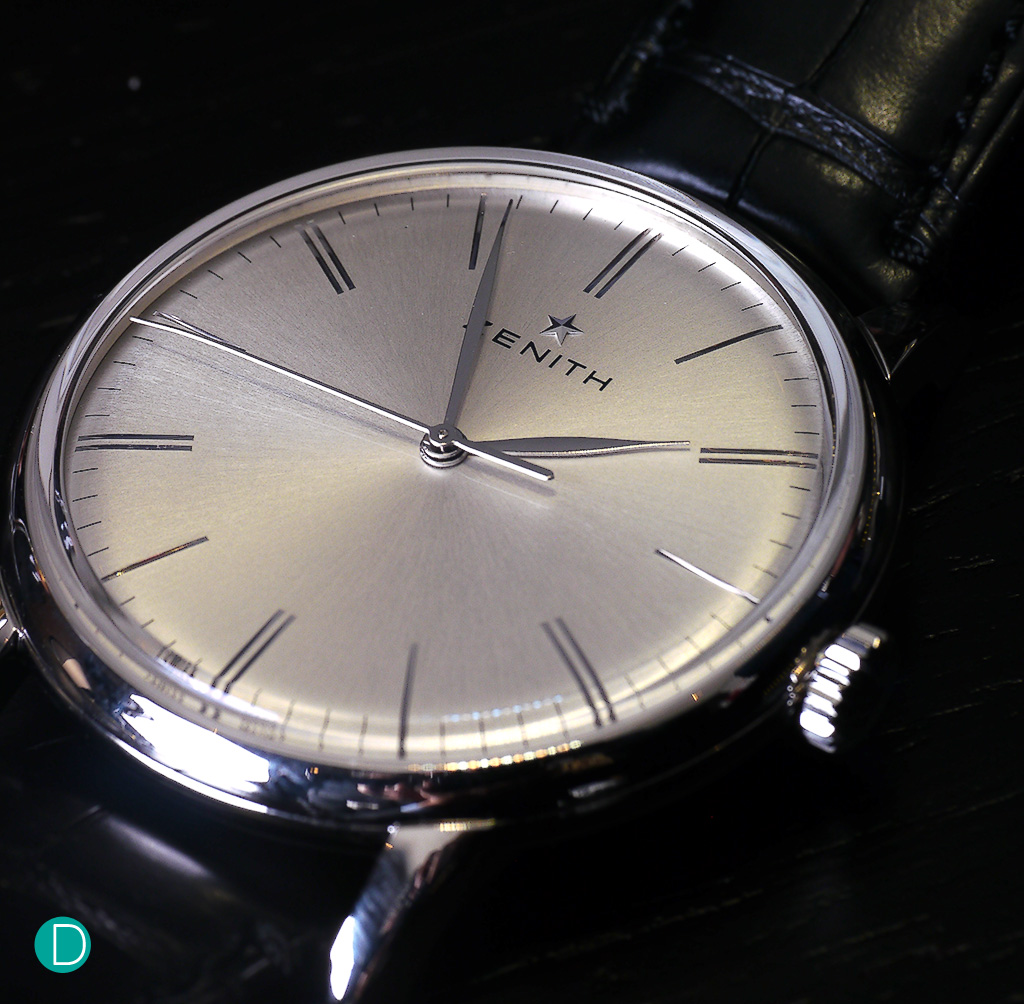 The Zenith Elite, with a smooth, slim case in stainless steel.

The Elite is the dress watch collection from the Le Locle-based watch manufacturer, with a classic and timeless design that is guaranteed to remain relevant for a long time. Zenith’s illustrious history has its high points with the El Primero and Pilot collections and sometimes, the Elite is overlooked.

Launched in Baselworld 2015, the Elite 6150 is a simple three-hand dress watch, with a clean design and classic case structure. But what we like is that despite the simplicity, Zenith had then great care in adding complexity in its aesthetics. For instance, we like the inclusion of a silver sunburst dial – which gives the watch some interesting effects especially when it is under some light sources.

Powered by Zenith’s in-house calibre, the self-winding timepiece has a power reserve of around 100 hours. It beats at a frequency of 28,800bph, and it contains 195 different components in its construction. The finishing is decent, although it lacks the superfluous decorations that is adorned on the higher-end pieces. The 42mm watch retails at €5,800 (approximately S$9,300), and it is definitely a nice dress watch to add into any watch collection.

A pair of Geophysic True Seconds, in different metal cases.

The Geophysic is a largely forgotten collection in JLC. The model, which was first launched in 1958, was produced to commemorate JLC’s 125th Anniversary, as well as the world’s first “International Geophysical Year”. It was only in production for a year, with less than 1,300 examples that were being made.

Fast forward to 2014, JLC reintroduced the collection, with the Geophysic 1958 Limited Edition. But what was interesting is that JLC did not just stop there. Over the last two years, they had introduced several new additions to the Geophysic collection, including the True Second, Universal Time, and the Universal Time Tourbillon. The True Seconds is the one that certainly interests us the most, with the seconde morte mechanism. We have a soft spot for the complication, as it is rather uncommon, and that it brings out a different effect from the sweeping seconds movement. It is rather cool as well.

The watch is fitted with JLC’s Caliber 770, a self-winding movement that features a power reserve of around 40 hours. The finishing, in our opinion, is pretty good as is typical for JLC. The watch is priced at S$13,300 for the stainless steel version, and S$25,900 for the pink gold variant. The Da Vinci collection has always been an odd child in the IWC family, since its launch in 1985. The watch, with its round case and fancy lugs, did not go down well with collectors in terms of its aesthetics. In addition, the chronograph pushers back then were rounded and stiff to operate. It was pretty much an acquired taste, and the collection didn’t achieve its intended response.

Over the years, IWC have experimented with case shapes for the Da Vinci collection. The tonneau shaped case of 2007 did not gain much commercial success as well. But in 2017, IWC had decided to go back to its roots once again, with a discreet and elegant rounded case. The highlight of the collection is perhaps the Perpetual Calendar Chronograph. For this particular piece, many elements of the original Ref. 3750 of 1995 remain, such as the four inner sub-dials, and the two semi-circular chronograph pushers. While its aesthetics may still not be everyone’s cup of tea, we think that it is certainly a very stunning timepiece. And we feel that it might just be the watch that might change the fortunes of the Da Vinci collection.

Priced at S$43,500 for the stainless steel version (and S$60,900 for the red gold model), the Da Vinci Perpetual Calendar Chronograph is aimed at the mid-level collectors. While it may not be as popular as say, the Big Pilot or the Portugieser, but the Da Vinci has a sort of charm to it – with its classic looks and delicate styling.

Finally, we have Rolex Cellini.

The Cellini is perhaps one of the most underappreciated and overlooked collection in Rolex. Its popularity is a far cry from the likes of the Oyster series of watches, which includes the likes of the Datejust, Daytona, as well as the Submariner. But it is a great pity. The Cellini collection actually features some really nice pieces, at a price point where it is competitive against its peers in the category.

One of our favourites from the collection is the Cellini Moonphase, which was launched in Baselworld this year. Besides its good looks, what attracted us to this timepiece is simply the attention to small details. There are two instances where Rolex demonstrated this. First, the watch features an elaborated double bezel – one portion is domed, and the other fluted. The next, and perhaps more impressively, is the dial. The white lacquer dial is brilliant, but it pays complement to the other elements that are featured on it. What particularly stood out was the moonphase disc, in which the disc is made from enamel, and the moon on it is produced from a piece of meteorite. Amazing? Yes, we certainly like to think so.

Priced at S$35,980, the 39mm timepiece may not necessarily be interesting for the typical Rolex collectors. But for those who are looking at something different, then the Cellini is definitely worth a second take.

When it comes to watch collecting, there is always two schools of thought. First, there will be collectors who are looking to play on the “safe” side, by going with popular and well-regard pieces that will definitely not go wrong. The other, interestingly, will tend to purchase the “unusual” pieces, to stand out from the crowd. There is technically nothing wrong with either, although we tend to the latter less often.

However, it is interesting to see why some collectors tend to choose these less popular choices. Perhaps an interesting story behind the creation or inspiration of the watch. Or just to take the road less traveled.

While it may be difficult for us to take the first step to select such underrated pieces, but we reckon that an addition or two will certainly spice up one’s watch collection.

Will you venture to the dark side and try out something different, for once? Well, we guess only time will tell…