Jaeger LeCoultre updates the Geophysic Collection’s worldtime watch with a tourbillon, making it the world’s first worldtimer to have a flying tourbillon. The production of the Jaeger-Lecoultre Tourbillon Universal Time will be limited to 100 pieces. During SIHH we had the chance to hold it, look at it and feel it. In this article we will share our initial impressions illustrated with live photos. How does it feel on the wrist? What about the finishing? Is it easy to use and legible? What to think of such a combination? A Personal note from the author

Back in the 1980s – when no one used mobile phones yet – I started travelling for work. My favorite watch was the Seiko 6 M15 9000 Worldtimer Chronograph. In fact, I still have it. It looks like an analog watch and features a worldtimer, an alarm, and a chronograph. A world timer may seem like a non-issue if you travel from A to B but if you travel across continents and timezones in a period of several weeks, it is easy to lose track of the correct time. So I love watches with world time functions ever since. I also love precise, sturdy, functional watches. Therefore the JLC Geophysic Universal Time caught my eye last year. This year’s JLC’s new kid on the block adds a feature that many people consider to be a proof of ultimate craftmanship: the tourbillon, more precisely a flying tourbillon. A rather rare combination, a world premiere in fact.

Editor’s Note: Peter Nievaart is a long time collector and joins us a contributor. Peter bought his first mechanical watch in 2001 and quickly became fascinated by the preciseness, durability and design of mechanical watches.  Functionality and simplicity as well as the harmony between the design of case, dial and movement  is what he is looking for in a watch. Not surprisingly, given his background in business and organisational change, he  is also interested in the people behind the watches, their craftsmanship and passion as well as industrial developments. Peter is writer, photographer, and consultant in brain-based leadership.

Wikipedia defines Geophysics as “a subject of natural science concerned with the physical processes and physical properties of the Earth and its surrounding space environment and the use of quantitive methods for their analysis”.

Subjects such as gravitation and magnetic fields are especially important for watch manufacturers. The first International Geophysical Year and the company’s 125th anniversary inspired Jaeger-LeCoultre to launch their own version of a sturdy, precise and durable watch in 1958: the Geophysic Chronometre. The movement features an anti-magnetic cage, Glucydur balance, a special adjustment spring, shock resistance.

In 2014 Jaeger-Lecoultre paid hommage to this classic watch by introducing the Geophysic 1958 Limited Edition, followed by the JLC Geophysic True Seconds and the JLC Geophysic Universal Time in 2015. Geophysic watches are designed to achieve precision, toughness and resistance to magnetic fields.

Jaeger-LeCoultre gradually introduced new features in each model: the gyrolab balance and seconde morte in the True Seconds, world-time functionality in the Universal Time and a flying tourbillon in the latest model. The latter at the expense of the True Seconds complication. The outer ring shows 24 cities representing 24 time zones in 2 circles. Cities in the Southern hemisphere are in red, cities in the Northern hemisphere in blue. We are always amazed that designers are able to give a balanced look to such a ring. There are also differences. The secondary ring indicating the 24-hour indication has moved to the outside and the there are no minute markers. So this watch is more about being in time rather than on time. 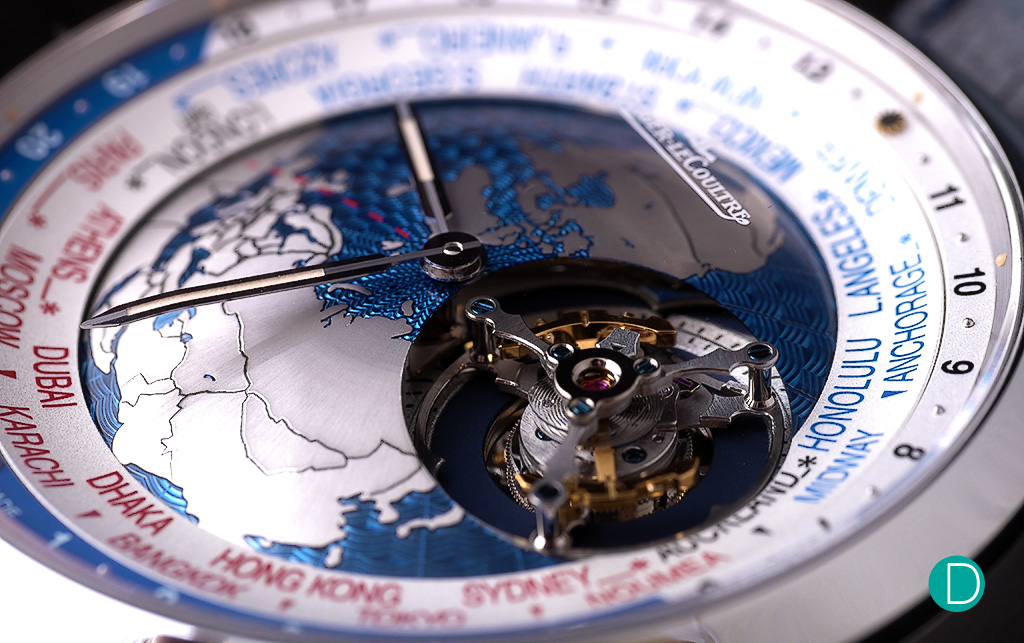 The dial shows a flying tourbillon via an aperture.

You have to see this watch in real to truly appreciate the design and quality. The convex shape of the earth surface leaves you with the impression that you are looking to Earth from space, the blue guilloché finishing of the oceans, the satin-brushed finishing of the continents, the luminescent points on the flange, and last-but-definitely-not least the details of the tourbillon, including the 90-degrees-turned-race-car-steering-wheel-shaped – or double anchor-shaped – Gyrolab balance. The flying tourbillon appears to float in space due to the absence of a bridge to hold the cage. The tourbillon’s position on the inner dial means that as the inner dial makes one revolution every 24 hours, so does the tourbillon, making it an orbital tourbillon.

Moving the 24-hour indication to the outside works well, both from a logical and an aesthetics point of view. This design makes the earth surface look more convex.

Despite its 43.5mm case width and 14.87mm case height, the watch sits comfortably on the wrist. It does feel hefty as the case is in platinum, and expect the feel to gently wear off, making it near un-noticeable on the wrist after a while. On the wrist the 43mm fits rather nicely, even under the cuffs of a dress shirt.

The JLC Geophysic Universal Time already surprised with a remarkably simple and useful feature for switching to another time-zone. It should be no surprise that the same can be said about the Universal Time Tourbillon. The time is set with the crown (there is only one!) and once set, the timezones across the world are in-sync and there is no need to adjust it while travelling cross timezones. Only on arrival, local time is set by the same crown to move the hour hand forwards or backwards, independent of the minutes and seconds.

Without a doubt, the watch is legible and clear. Although the visibility in the dark might not be the best, as the SuperLuminova is only applied to the inside of the hands and as luminous dots on the hour markers. The use of light versus darker colours, red vs blue colours contribute to the legibility. Furthermore, it is easy to use and easy to wear. The watch houses the Calibre 948 movement. This new, automatic mechanical movement beats at 28,800 vph, has 48 hours of power reserve, consists of 375 parts and has 42 jewels. The oscillating weight is made out of 22-carat pink gold. The movement is even thicker than the movement of the Geophysic Universal Time (JLC C.772), measuring 11,24mm in height. We expect it to as reliable as all JLC movements. It should be noted that the true seconds complication is excluded from this movement.

The cal. 948 movement is JLC’s first movement that features a world-timer and a tourbillon. Functionality includes central hours and minutes, a flying tourbillon with seconds indication, summer time indication, 24-hour day/night indication. The hour can be set by one-hour jumps clockwise or anti-clockwise.

The non-circular shape of the Gyrolab balance wheel aims to reduce air friction and consequently increase precision and efficiency. The balance wheel was first used in the Master Compressor Extreme Lab 1 in 2007.

The movement can be seen in its full glory through the sapphire case-back. The competitive landscape for mechanical watches that feature both a world-time/GMT function and a tourbillon is as to be expected rather limited. The following watches spring to mind: the Cecil Purnell World Time Bi-Axial Tourbillon (CHF 245,000), the Cecil Purnell Tri-Axial Tourbillon, the Greubel Forsey GMT (CHF 545,000). All much more expensive than JLC’s offering of US$ 145,000 before taxes.

To our knowledge the JLC Tourbillon Universal Time is the only watch that combines world time functionality with a flying tourbillon.

Note: a tourbillon aims to increase the precision of the movement by countering the effects of gravity. This is done by mounting the escapement in a rotating cage. The invention was developed and patented by Abraham-Louis Breguet in 1795. Multiple implementations have been developed since, including the double-axis, double quadruple, triple-axis and flying tourbillon. Instead of being supported by a bridge or cock, the flying tourbillon is cantilevered and supported from one side (source: wikipedia). This leaves the impression of a free-rotating escapement. The JLC Geophysic Tourbillon Universal Time offers a – relatively speaking – affordable opportunity for those who love the tourbillon complication and like to wear their watches while crossing timezones. The design is appealing and the execution is very good. The magnificent beauty of the dial, its supreme legibility in good light stands in its good stead. Operationally, its straightforward operating mode is a big pluses, especially as the traveller is already tired and probably also suffering from jetlag. Combining a world time and tourbillon function in one watch is rather unique if not surprising and therefore a bit of an oddball among the watches. jaeger-lecoultre jlc tourbillon worldtimer
Share. Twitter Facebook Pinterest LinkedIn Tumblr Email
Previous ArticleIn House and Everything in between: Are collectors asking to be lied to?
Next Article Inside Patek Philippe’s Home at Plan-Les-Ouates Pt. 1