We all love a good chronograph. Somehow it communicates to us in a visceral way. It works on demand and responds instantly. Start, stop, reset. The basic chronograph is a complicated watch, more than most collectors imagine. The flyback chronograph (French: retour en vol) increases the complexity a notch, and allows us to go from start to start again without having to push the stop and reset buttons. And the chronograph becomes even more difficult to execute when we are required to time two separate events: in essence two chronograph in one. Enter the split seconds chronograph. Complicated. Bewildering. Intriguing. And in true prima donna style, we take the opportunity to present the Patek Philippe 5370 Split Seconds Chronograph. Introduced in BaselWorld 2015, it captured the imagination of many collectors and journalists. We were intrigued.

It was in 1920 when Patek Philippe presented its first wristwatch chronometer with a split seconds complication. They dubbed the complication rattrapante, a French word meaning “catch up”, as the watch is equipped with two seconds counters, one on top of the other. The top hand can be stoped independently of the other, allowing two separate and distinct times to be recorded. The Germans call the function doppelchronograph, or double chronograph. 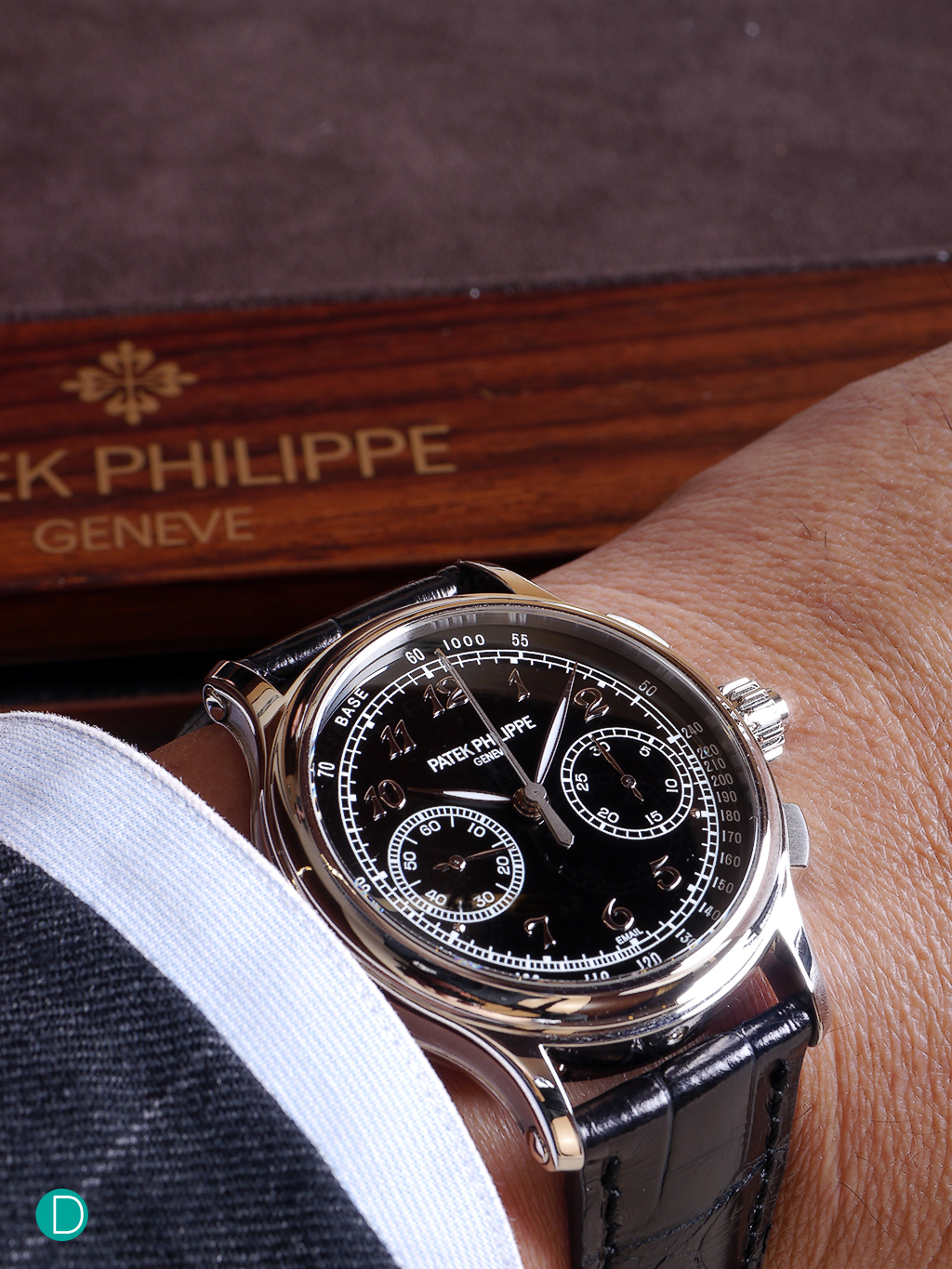 The movement in the ref.5959 is the Patek proprietary movement base: the CHR 27-525 PS. CHronographe à Rattrapante being the prefix making reference to the split seconds function. The ref. 5959 was also the first in-house chronograph made by Patek Philippe. Earlier chronographs, including the illustrious ref. 3970 (CH 27-70) and the ref. 5004 (CHR 27-70) are based on a heavily modified Lemania 2310 ébauche.

The ref. 5370 in this review is powered by the CHR 29-535 PS, as per Patek Philippe nomenclature, this is caliber no 29. The 535 being the variant, in this case also denotes the thickness of the caliber. The CHR prefix denoting split seconds chronograph, and the PS stands for petite seconds – small seconds hand.

The Patek Philippe 5370 Split Seconds Chronograph has an imposing presence. Measuring some 41mm in diameter, it sits comfortably on the wrist, but is larger than most Patek Philippe watches. The case design is sensuous, featuring beautiful curved lines which hug the round case and the elegant sloped shoulders of the bezel. It is available only in platinum, though it may be offered in other gold metals in the future. The dial is grand feu black enamel, and is rather resplendent in its deep black, shiny finish. The markers are in white print offer a high contrast and good legibility. Hour numerals are in Breguet style, and in white gold appliqué. Elegant leaf shaped hands, filled with superluminova gives the watch a rather upperclass feel, in line with its heritage as the Grande Maison. The black enamel dial deserves special mention. Black enamel is perhaps the most difficult to manufacture, as the deep black glossy surface shows up any defects and artifacts common in many enamel dials easily. Interestingly, this is the second black enamel dial to appear in 2015. In SIHH, Lange introduced its Lange 1 Tourbillon Handswerkskunst which also feature a flawless black grand feu enamel dial. The only other notable black enamel dial was made by Jacquet Droz in its early years, featured on their Grande Seconds model with a particularly thick enamel layer.

The ref. 5370 dial is made by Cadrans Stern Frères, a company owned by the Sterns who currently own Patek Philippe. They bought the firm in 1932 and have held it privately in the family since. The dial is solid white gold, and is first coated by black enamel by hand. Enamel is vitreous in nature, being based on glass, melts when fired at the oven at 850°C. It is allowed to solidify and several layers are fired. The dial is then drilled by hand to make the openings, and this must be done with great care and skill, as the enamel is very hard, but brittle. The drilling can break the dial easily, destroying the entire dial. These piercings are used to mount the feet of the appliqué numerals, and also for the hands’ pinions to pass through.

As is usual for a Patek Philippe chronograph movement, the CHR 29-535 PS is a joy to behold. The CHR 29-535 PS. Beautifully laid out, it shows the complicated nature of the split seconds chronograph. Note the double column wheels.

A full sized wallpaper version of the photograph measuring 1920 pixels x 1200 pixels is available for download on the condition that it is used only for non-commercial, personal purposes without any modifications. By clicking here to download, you agree to this condition.

As mentioned, the movement is exceptional. The design is beautiful, with the layout showcasing Patek Philippe’s craft. Note the magnificently curved levers and springs. Note also that each lever and spring is carefully polished and anglaged. As is expected, all screws are polished and sit in polished, chamfered openings. The steel chronograph works are straight grained on their top surfaces and also anglaged. The main column wheel. As is typical for Patek, the column wheel features a black polish, anglaged cap. Note also the perfectly finished anglage on the bridge above the column wheel: the execution of the sharp angle is exemplary.

The main column wheel commanding the functions of the chronograph is topped with a black polished steel cap. Enormous attention to detail is paid to this cap. The edges are beautifully anglaged, and the center part, holding the screw pin for the column wheel features chamfered sides which are also polished. Movement detail showing the clutch system, and the split seconds scissors brake system. Finishing is immaculate. The detailing like the spiral looking spring stretching from about 9 o’clock in the photograph to the center is very elegant and beautiful.

A full sized wallpaper version of the photograph measuring 1920 pixels x 1200 pixels is available for download on the condition that it is used only for non-commercial, personal purposes without any modifications. By clicking here to download, you agree to this condition.

A special feature of the CHR 29-535 PS is the horizontal clutch system features an isolating mechanism which comes into effect when the lap times are stopped. This reduces the friction on the split seconds wheel,  eliminating unwanted friction to prevent a degradation of balance amplitude while the split-seconds hand is immobilized. In a classical split seconds chronograph, the split seconds wheel is not isolated from the movement train when it is stopped, but slips on its own axis.

The movement beats at 28,800 bph and is equipped with 34 jewels and a power reserve of 55 hours

This is a remarkable watch. A holy grail for many. The split seconds complication as the stand alone feature also makes it a purist watch. One which is treasured for its sole function as a double chronograph. The finishing is par excellence, as can be expected from a top drawer Patek Philippe. The ref. 5370 comes under Patek Philippe’s classification as a Grand Complication. The retail price is a rather steep US$249,200. But Patek Philippe chronographs often do very well in the secondary market, perhaps its a well justified investment. Patek Philippe 5370 case side detail showing the sensuous curves of the lugs and the pushers. Note the coaxial pusher on the crown.

Competition? Well the closest is perhaps the Lange Double Split. The Double Split offers a more teutonic feel. The split button is placed at 10 o’clock instead of being coaxial to the crown. The movement layout is arguably even more beautiful, Lange creating a layered effect with their base three quarter plate movement as the base and the chronograph laid over. Finishing on the Lange is also ne plus ultra. But the Lange has a trump card. It offers a unique ability to record the split timings for up to 30 minutes, instead of the traditional 1 minute maximum split time. Lange also offers an instantly jumping minute counter for both the chronograph and the split seconds totalizer. But the Lange Double Split is not available in an enamel dial.

So which one is better? Well, as usual, there is no real answer. Pick either. One cannot go wrong with either the Patek Philippe 5370 or the Lange Double Split. Better yet, if one is in a position that does not require one to choose, then acquire both would make an awesome arsenal of split second chronographs. Vive la différence!