There was a time, in the not so distant past, when people discredited Hublot for being too similar to Audemars Piguet. It was unpleasant, but it was not too difficult to see why. The design, the concept, and the execution were uncannily familiar. But things have changed . The MP-05 “LaFerrari” in Titanium.

The new Hublot MP-05 “LaFerrari” is one of the latest novelties from the much-maligned watchmaker. The concept of the MP-05 “LaFerrari”, as the name suggests, is based on the LaFerrari sports car. In fact, it is part of a collaboration with the Maranello-based carmaker. At the first glance, things are definitely looking good. The MP-05 “LaFerrari”, with diamonds this time.

When we first saw the watch, we thought we had seen a sculpture of a engine of some sort. Well, this is not surprising, as that is what the design of the MP-05 was derived from. It had that futuristic and mechanical look that would set the heart of geeks on fire. It was so unusual, so deviant, but spectacular nonetheless. We were honestly blown away by its aesthetics. But this watch is not just merely an art piece. The mechanisms behind the watch is simply brilliant, to say the least. Does the MP-05 “LaFerrari” reminds you of a car engine?

While the watch is aesthetically immense, most of its magic actually comes from the movement itself. Here, we have an in-house developed movement which featured a staggering 637 components. That, by the way, is also the first time Hublot created a movement with such a huge amount of components. The movement features eleven barrels, in which it helped the watch to attain a power reserve of 50 days.

And that is just the tip of the iceberg. What is more fascinating is the power reserve of this watch. With the use of eleven barrels that intertwine and arranged together in a line, it has managed to achieve a power reserve of 50 days. Yes, you have heard that right. 50 days. That is, coincidentally, a world record as well. Hublot managed to accomplish this feat by transferring the energy from one barrel to another. This helps to support the eleven barrels in the movement, and allowing the watch to sustain a longer power reserve. This is brilliant, to say the least. The incredible watch also features a suspended vertical tourbillon, which is proudly displayed via the window at the 6 o’clock position of the watch. Time is displayed via the drums that are displayed at the top left and right corner of the watch. The two drums on the right features the hour and minute display, while the two drums on the indicates the power reserve and the second display. The numerals and indices in each drums are also coated with SuperLuminova to improve legibility in the dark. That is a neat touch, and it gives the watch a mysterious and avant-garde feel when it glows in the dearth of luminosity. 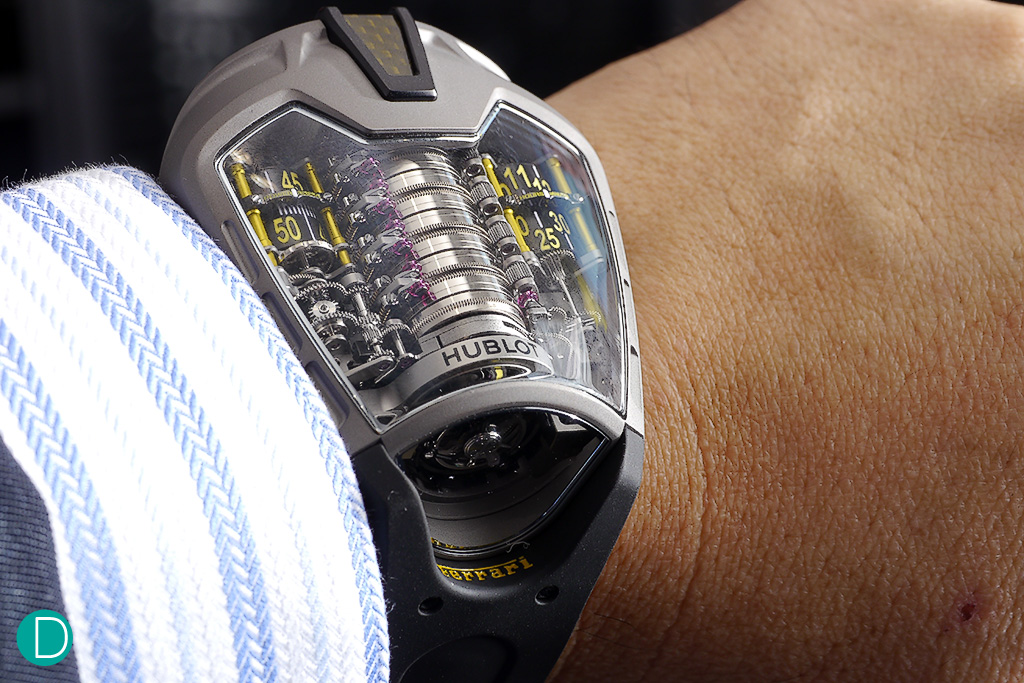 A wristshot! It actually looks really good on the wrist, although collectors with smaller wrists may find it slightly uncomfortable due to its large size.

The Hublot MP-05 “LaFerrari” never cease to amaze us. It has other quirks too, such as the use of a “power drill” to wind the watch and set the time. It seems as though the team behind the watch was told to create a timepiece that is beyond their wildest imagination, without any limitations or boundaries. The result? An extraordinary and conversational timepiece that is seemingly out of this world.

The Hublot MP-05 “LaFerrari” comes in two main variants: either in microblasted titanium or microblasted black PVD titanium. Each variant is limited to 50 pieces, and they are priced at SGD 585,300 each (excluding the diamonds).