The chronograph, as many readers might know, is essentially a complication that features a stop-watch function. It allows the users to keep track and record the time for a particular event. Over the years, especially in the earlier part of the 20th century, chronographs have found themselves in various applications. From being used to calculate speed (tachymeter) and heart rate (pulsometer), to calculating the timings of artillery fire.

However, for today’s article, we are focusing on twin register chronographs. There is always this thing about twin register chronographs, in terms of its aesthetics. It is beautiful, and it appeals to us greatly because of its cleaner design (fewer sub-dials means a less cluttered dial overall) and the balance that it provides. So, what are the six pieces that made it to the list today? Let’s find out! We begin with the timepiece that gave us the inspiration for today’s article: the Hamilton Intramatic 68 Autochrono Limited Edition.

This particular Hamilton immediately caught our attention when we first saw it. The timepiece, which is a remake of the vintage Hamilton Chronomatic in the 60s, is stunning to say the least. We love the way it looks – especially with the contrasting sub-dials (against the black dial), the detailing (such as the use of the old Hamilton logo, and the design of sub-dial), as well as the “pump-pusher” actuators.

Priced at US$2,195 (approximately S$3,080), the 42mm Valjoux 7750-based timepiece is certainly a nice addition for collectors who wish to buy an entry-level chronograph. The watch is limited to 1968 pieces, and we reckon that this is going to sell-out pretty fast. For our regular readers, you might have realised that the Longines Pulsometer Chronograph have been featured on multiple occasions in our Throwback Sunday column. The watch was inspired by a doctor’s watch from the 1920s. The timepiece, which features the Pulsometer, allows doctors in the past to measure the heart rate of the patients.

The Pulsometer Chronograph is not just a pretty watch. Beneath the lacquered dial, the timepiece features a custom-built ETA movement for Longines – the Calibre L788.2 (ETA A08.L11). It is a column wheel monopusher chronograph, which features a date indicator and a power reserve of approximately 54 hours. The finishing of the movement is not exactly spectacular, but it is definitely done decently for a watch at this price point.

The 40mm timepiece is stunning – no doubts about that. And priced at S$6,360, we believe that it is difficult to find another timepiece that can match this Longines in terms of its value proposition.

The Habring² Doppel 3 is the third generation of split seconds chronographs from Richard Habring, following in the footsteps of the GPHG winning Doppel 2 and the original Doppelchronograph from IWC.

Moving on to the independent watchmakers, we have the Doppel 3 from Habring².

Richard Habring, the brains behind the brand, is perhaps most known for his split-second module that he invented in 1991 for IWC. The patent expired in 2011. By then Richard had left IWC and founded Habring², and he went on to produce the Doppel 2 which won the 2012 GPHG Sports Watch of the Year award. Subsequently, the chronograph was enhanced with split seconds and introduced as the Doppel 3. The new watch features a classic dial design, as well as the use of only two actuators for the chronograph mechanism (one to start-stop-reset, and the other to activate the split-second function). The base remains the Valjoux 7760, and the timepiece features a modular system, which allows additional modules (such as a full calendar or a center minutes’ counter) to be included. The Montblanc 1858 Chronograph Tachymeter. A fine timepiece, with an equally alluring blue dial.

In the recent years, Montblanc had certainly made a strong statement of intent with its revamped collection. The introduction of the 1858 Collection is one of them, in which it combines the best of both worlds: the traditional workshops of Montblanc in Le Locle, and their ateliers in Villaret.

The 1858 Chronograph Tachymeter is one of the results from this collaboration. The timepiece, which was launched in late 2015, epitomises fine watchmaking with captivating aesthetics. The watch is fitted with a stunning blue dial, featuring a retro-styled look with interesting touches like the cathedral hands and the use of both the old Minerva and Montblanc logos. Together with the block numerals and the large onion crown, it is a reminiscence of the pilot watches that Minerva had produced in the 1920s – 1930s.

Powered by the Minerva Calibre 16.29, the 44mm monopusher chronograph is an extremely well-finished movement. We also like the traditional chronograph elements, such as the use of horizontal clutch and a large balance wheel that beating at 18,000 bph. It also features the famous “Devil’s Tail”, and the overall design of the movement is simply a remarkable sight to behold. 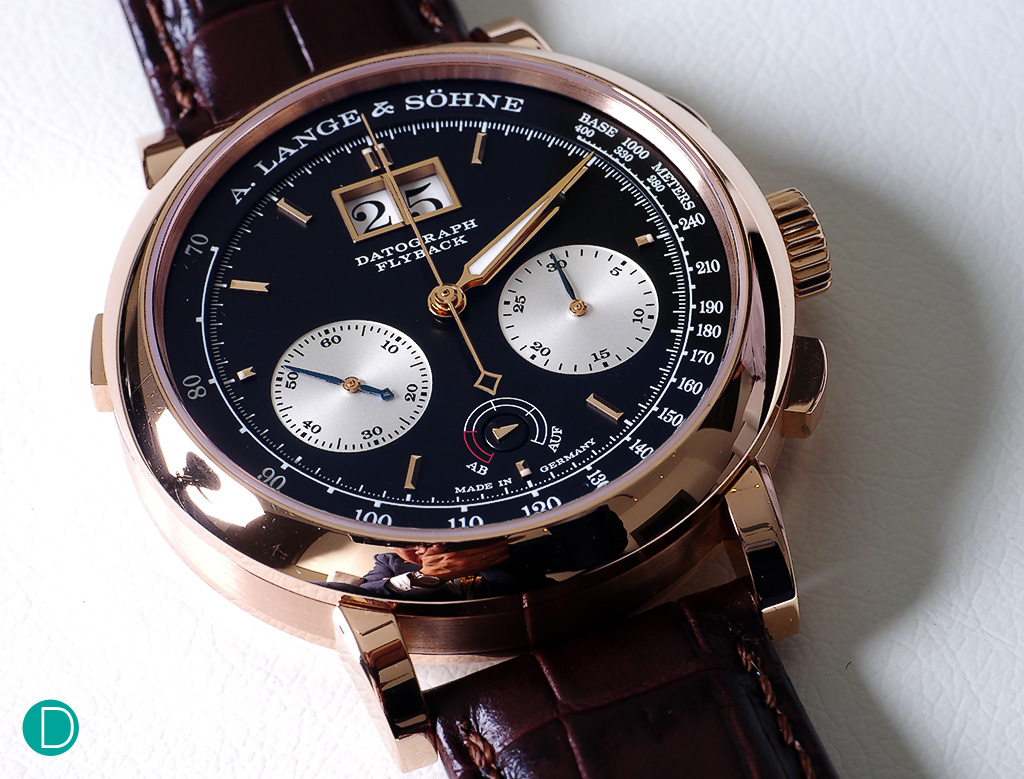 When the Datograph was first launched in 1999, it took the entire industry by surprise. It was not just for the fact that A. Lange & Söhne was still a young company back then, but it was also produced at a time when many high-end watch manufacturers are still relying on a few specialist manufacturers for the chronograph movements. It was really a big deal in Baselworld 1999.

The Datograph is perhaps one of the finest chronographs that was ever produced. The movement – L951.6 – is an extremely complicated movement that comprises of 451 components. The new Datograph Ab/Auf, which was launched in 2012, features an additional power reserve indicator, a longer power reserve of 60 hours, as well as a larger case dimension at 41mm. This is in addition to its big date display, as well as the fly-back chronograph function. And of course, in the typical Lange fashion, the finishing and attention to detail is nothing short of amazing.

With that being said, the Datograph Ab/Auf comes at a hefty price tag. The watch retails at US$90,700 (approximately S$127,350), but this is truly a special watch that encapsulates the art of fine watchmaking. Finally, we have the Patek Philippe 5370 Split Seconds Chronograph.

When we first caught sight of it at Baselworld 2015, we were truly mesmerised. Fitted with a beautiful black grand feu enamel dial, and contrasted with white detailing and white gold applied Breguet-style numerals, the 5370 is indeed a very attractive timepiece. The 41mm timepiece features a rather nice platinum case as well, with sensual curves and slopped lugs that bring out the elegance of this timepiece.

But that’s not all. On the flip-side, the Caliber CHR 29-535 PS is displayed via the exhibition caseback. The construction is beautiful, and the finishing is superb. The manual-winding movement also comes with a horizontal clutch system, and have a power reserve of around 55 hours.

The Patek Philippe 5370, notably, comes with a slightly hefty price tag. This example, which is only available in platinum, is priced at US$249,200 (approximately S$350,000). But putting the price aside, the 5370 is truly a magnificent timepiece – both inside out. There aren’t many watches that can surpass this one.

Looking through this article, we hope it is not difficult to see our love for twin register chronographs. They are beautiful, but more importantly, the look is clean, uncluttered and symmetrical. We think they are classy and elegant.

We have included a monopusher and a split second chronographs.

So, what are some of your favourite twin register chronographs? Do you agree with our selection? Let us know in the comments section below!