A watch is an instrument that was invented to serve a purpose, and that is to allow the user to tell time. Over the years, many complications have been created to supplement the sole purpose of telling time. One of the complications is today’s Throwback Sunday article: the Chronograph.

The Chronograph is basically a complication that is a stopwatch built on a watch: it records the time that had elapsed during a particular event. Depending on the device, it can measure the hours, minutes, seconds, or even down to 1/10th of a second (e.g. the Zenith El Primero Striking Tenth) that an event had taken to occur.

Nevertheless, for these two weeks, we will be sieving through our archives of many excellent chronograph watches and highlight them in two installments of 6 recommendations each. In this week’s installment, our selections will be more focused on chronographs with a good price proposition. The Rolex Daytona, Ref 116520. This example is cased in stainless steel, and it features a black dial.

First off, we have the Rolex Cosmograph Daytona. The Daytona is a very handsome and highly recognized timepiece.

The Reference 116520, we featured a rather special one here in our review, is the latest reiteration of the Daytona family. While it looks rather similar to the previous generation of the Daytona (Reference 16520), this one features an all-new in-house movement. The new movement (Calibre 4130) features many improvements that include an increase in power reserve, a stop-second function, as well as a vertical clutch system. Other differences include the new clasp, some minor tweaking on the design of the bezel and dial, as well as a slightly thinner case.

There are many variants of the Daytona, and we reckon that the stainless steel version is the way to go. It looks sporty and stylish, and it fits both casual and office attire. You can’t really go wrong with this one.

The Omega Speedmaster Professional, also affectionately known as the “Moonwatch”. 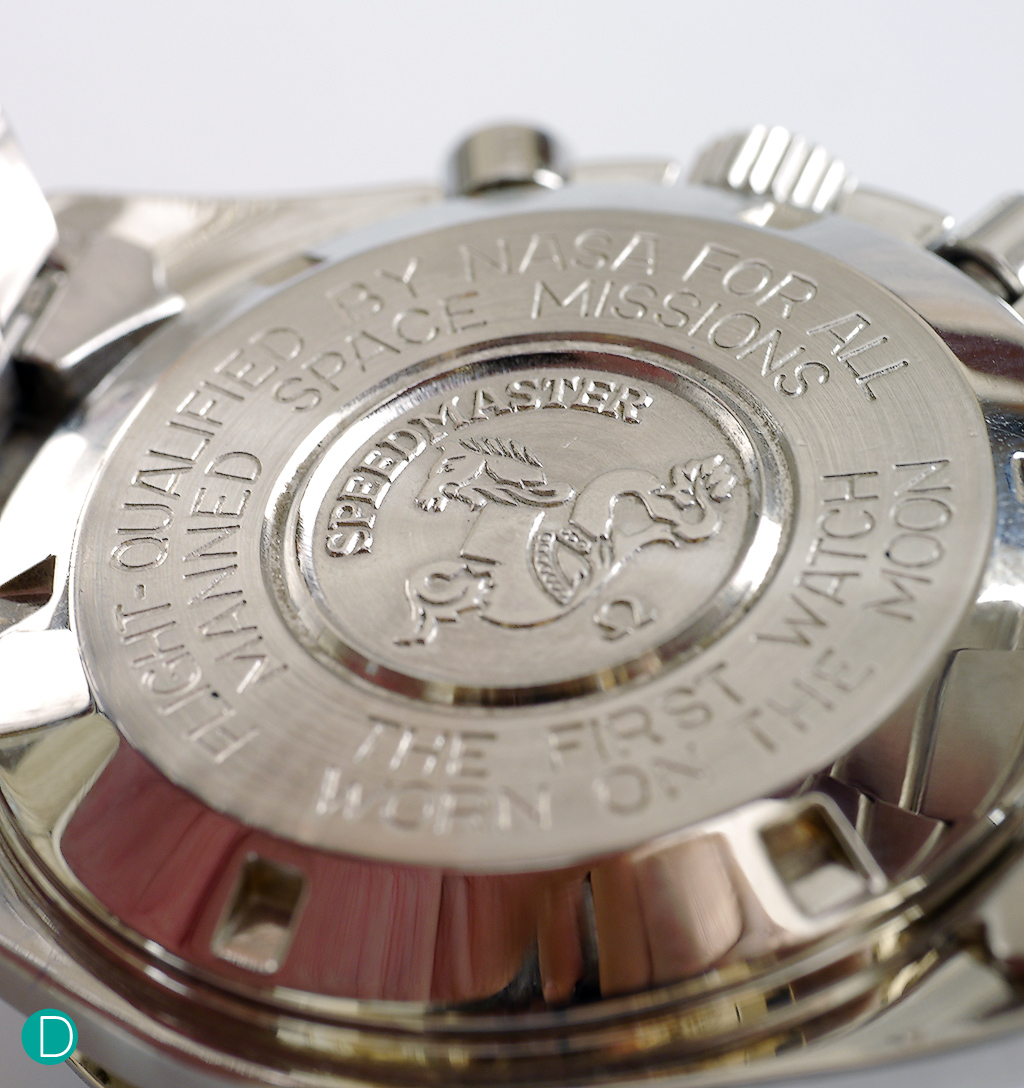 These are not just mere statements; it is a testament to the quality and reliability of products by both Omega and Lemania.

Over the years, the “Moonwatch” had undergone several facelifts and upgrades. Most notable changes include the movement, as well as the clasp and bracelets. Subtle changes were done to bezel and the fonts on the dial. While there are not much changes to the overall aesthetics to the timepiece. And the watch marches on its evolution, improving with each iteration in terms of the technical bits and performance.

The “Moonwatch” is a relatively affordable timepiece, and we would certainly recommend it to collectors who wants to own a chronograph that is iconic and yet value for money. When it comes to chronographs, the Zenith El Primero is certainly one of the names that would come to mind. Besides being the first chronograph to feature a fully integrated self-winding movement, the El Primero is also famous for being the movement of choice for the previous generation of Rolex Daytona (Reference 1652X).

The original El Primero was a culmination of 7 years of sheer hard work and perseverance. The journey was long and arduous, as the engineers and watchmakers faced a mammoth task of making the perfect chronograph movement. Some perimeters include a fully integrated movement, a high frequency oscillating wheel (to improve accuracy), and a date mechanism. To top it all off, the movement had to be as thin and small as possible. It had not been an easy feat. They had to extend the dateline by 4 years. But the result is rather stunning and the rest, as they said, is history.

Over the years, Zenith have incorporated some additional complications into the El Primero chronograph. One of them is the Triple Calendar, found in the El Primero 410. We like how Zenith added a triple calendar complication’s additional indicators nicely onto the dial. It still looks very neat and legible, which increases the charisma of this iconic timepiece. Similar to the “Moonwatch”, the El Primero 410 is another value-for-money timepiece, and we highly recommend this to any collectors who want to be introduced to the world of watch complications. The Grand Seiko Spring Drive Chronograph. An extremely solid and well-made timepiece, from the Land of the Rising Sun.

When it comes to watches, it is usually the Swiss watchmakers that will get the bulk of the limelight. However, unknown to many, there are a few watchmakers from the Land of the Rising Sun that are capable of giving their European counterparts a run for their money. One fine example is Seiko, or more specifically, the Grand Seiko department. An open secret treasured among connoisseurs, and relatively unknow to many.

For those who are in the loop, one would understand the quality and value proposition of Grand Seiko watches. The Grand Seiko Spring Drive Chronograph, in our opinion, epitomizes that. It is very affordable, considering the is an innovative chronograph, conceived and built from ground up. It includes the date indicator, a chronograph, a power reserve indicator, as well as a GMT function.

The finishing and attention to detail is excellent. Some finishing on the movement includes the Nagano Stripes (the Japanese equivalent of the Côtes de Genève) and anglage on the edges of the various watch components. Additionally, the case and hands are polished using the Zaratsu (blade polishing) method.

In a nutshell, the Spring Drive Chronograph is a solid and modest chronograph, and a very handsome too. This Grand Seiko offers an excellent alternative to the usual Swiss options. Interestingly, some people have also loosely gave the Heritage Chrono Blue the moniker “Montecarlo”. Strictly speaking, this is not correct, as “Montecarlo” is used to refer to the original variant made in 1973.

There are many reasons to love the Heritage Chrono Blue. The striking blue and orange color scheme, for instance, is definitely one of the main highlights of this timepiece. Other features include the nostalgic design cues from the 1970s, to the ever-reliable ETA-2892 as the base movement. It simply ticks all the right boxes for a fun and casual timepiece.

The Heritage Chrono Blue is a nice alternative to the original “Montecarlo”, considering the high prices that collectors are asking for the latter these days. It still retains the stylish good looks, but at a fraction of the cost of its predecessor. It is definitely worth a second look, for both seasoned and new collector. Finally for this installment, we have the IWC Pilot Chronograph “Top Gun” Edition. At the first glance, we thought that this is a darn cool timepiece. The stealthy ceramic casing, topped with the association with “Top Gun”, had certainly taken our breath away.

The “Top Gun” edition is basically a special edition timepiece that is based on the normal IWC Pilot Chronograph (Reference 3777-01). Differences include a bigger case in ceramic, and the special “Top Gun” caseback. There are other subtle touches too, such as the Kevlar strap and a fighter plane motif pinned at the end of the chronograph needle.

Notably, the watch is powered by the popular Valjoux 7750-based movement. While the movement is neither special nor exciting, but it certainly very reliable, robust and holds a very important role in the world of horology. Many watches, including IWC’s own Grand Complication and other vendor offerings such as the Concord C1 and the Glycine Airman Airfighter, feature the same chronograph movement. It is the cornerstone of many chronograph watches, and it certainly deserves some recognition in that respect.

Honestly, if one is looking for a basic chronograph timepiece, then the IWC Pilot Chronograph “Top Gun” Edition should be relegated aside. In terms of value proposition, there are many outstanding chronograph watches that utilize similar movements and are priced much more reasonably. But if you are a crazy fan of Top Gun (just like this writer), then we think that this might be an interesting proposition after all.

Well, we have come to end of the first installment of our Throwback Sunday article on Chronographs. While most of the watches that we have featured today are relatively more affordable, we thought that they are suitable for both the seasoned and the new collector alike. They are well-priced, and they offer collectors a variety of style and designs.

To give you readers a flavor of what’s for the next installment, we will be featuring some stunning chronographs that are of a higher price point. Some notable names, such as the likes of A. Lange & Söhne and Patek Philippe, will be featured. However, do also keep your eyes peeled for some other lesser known brands, including intriguing pieces from independent watchmakers. That is all that we can reveal right now though. 🙂

Till then, adiós, and we hope that you have enjoyed our article this week!