Many collectors credit Stallone’s indelible performance in Daylight whilst wristed with a Panerai for sparking the trend for big watches but the inception and taint in the horological zeitgeist began as early as three years earlier in 93 with the brand’s resurgence of Panerai’s Marina. Sure, Stallone might have catapulted the idea of a wrist behemoth acceptable for a daily beater but this trend began as something as innocently as needing a right movement and not finding one. To herald the brand’s return, Panerai first turned to Rolex, an understandable reflex given the depth of history between Panerai and then Rolex/Cortebert but Wilsdorf’s firm had turned them down and the Florentine brand had to turn to the humble Unitas 6497.

There’s a certain ubiquity in the legend that is the Unitas 6497. Though “basic”, the robust nature of the 16 1/2 ligne  Lepine-style manual pocket watch has powered some of the most legendary to the most pedestrian of watches in the last few decades. Given the pocket-watch sized nature of the calibre, there is little doubt that watch cases had to “grow” to fit, heralding a trend to larger watches.

Left: A raw Unitas 6497 as used by Bulova back in the day. Right: An industrially finished version from Tourby watches.

To modern ears, we know them as ETA today, the Unitas 6497 and 6498 manual wind movements differ in architecture, most obviously displayed by the different locations of the subsidiary seconds. The 6497’s small seconds are at 9 o’clock, opposite the crown. The 6498 on the other hand would have small seconds at 6 o’clock, with the crown at 3.

Today, the 36.6mm movement is one of the bigger stock movements presently; at 4.5mm, it’s considered slim but not extra-thin by any definition and it operates at a leisurely 18,000 with modern editions modified to provide a buffer of stability through a speedy 21,600 vph or 3Hz. Even the power reserve can vary between 40 to 56 hours.

That said, the aforementioned ubiquity can downplays just how special a “common” movement can be – an expansive landscape of bridges and plates lend themselves as an expressive canvas for the artistically inclined watchmaker. Meanwhile, its dogged reliability and sturdy build means that the base calibre can be regulated to chronometer specs made possible by the four-position adjustment device, regulating the rate to precision of anywhere from 0 to 10 seconds a day. The main gears are non-magnetic and the glucydur balance wheel is temperature resistant. In short, it’s a modder’s dream. A highly modified ETA 6497 from Steinhart with some hand finishing on this limited edition model.

Close to 70 years old, everyone from Alpina to Zeno has used the humble Unitas as a base calibre. It’s versatility and technical specifications allow it be a calibre of great repute on all spectrums of horology – from a watchmaking apprentice’s practice watch to a standard of high horology, the 66 year old movement is simply ideal and in short, evergreen. Yet, it does not remain unchanged and unevolved, in the calibre can be so thoroughly renovated that it resembles nothing it used to be – case in point, the Maurice Lacroix ML-16 skeletonised with added date wheel. Today, ETA eschews the distinctive large balance cock for pallet lever bridges and an Etachron regulator in the 6497-1 and 6498-1 models. Meanwhile, those with the suffix 2 feature Incabloc shock protection and finishing with some variations beating at 21,600 vph. Omega used a variant in the Railmaster XXL, modified with a Triovis regulator instead of Etachron. 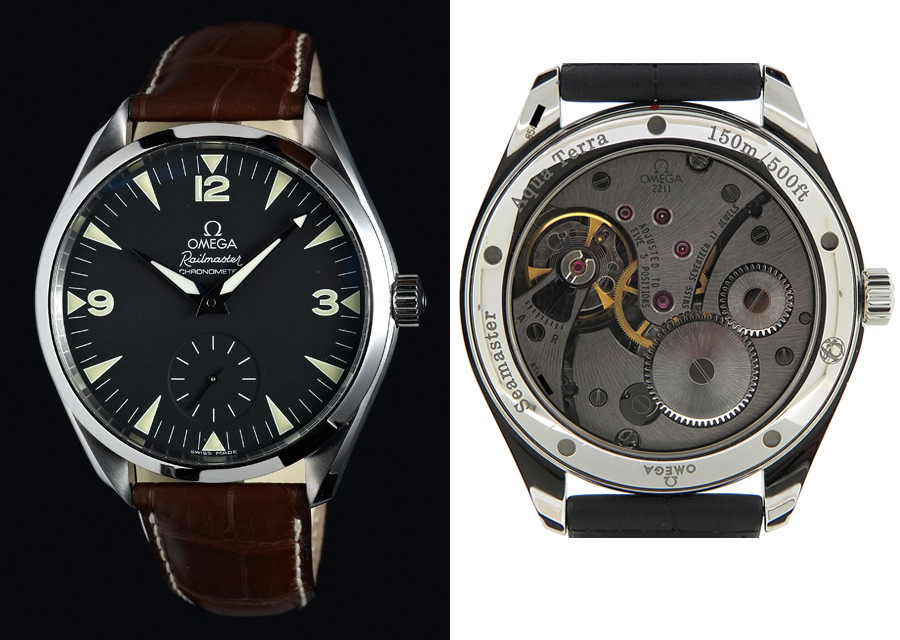 Railmaster XXL, modified with a Triovis regulator instead of Etachron.

It’s difficult to correctly express just how amazing the Unitas 6497 is without discussing a small boutique brand called Molnar Fabry. A namesake of founder-artisans – Michal Molnar and Igor Fabry. They started as certified jewellers and goldsmiths and then started applying high-jewellery techniques and know-how to high watchmaking.

Admiring the quality and precision of Philippe Dufour’s and Antoine Preziuso’s craft, provided the foundation for Molnar Fabry’s inventiveness to find original ways to apply their jewellers’ expertise into the realm of horology, as well as to master more horological complications for a higher form of our artistic expression. That said, look at the number of Unitas 6497 movements and modifications that have rendered them virtually unrecognisable.

There’s a lot of leeway when it comes to the Unitas movement – a larger size lends itself to a larger mainspring barrel with greater torque – with that kind of horsepower, you get options for added complications – double retrograde calendars, secondary timezones etc. That said, the Unitas 6497 is a victim of its own success, it costs so little in terms of retail ($300, far less if you buy wholesale) that even after extensive modifications have been made, buyers can bulk at Unitas powered movements costing over $1500.