Mention Voutilainen and the Vingt-8 comes immediately to mind; it is after all the most well-known timepiece by the humble Finnish watchmaker. The Vingt-8 perfectly encapsulates the philosophy of Kari Voutilainen as it is timeless in design and superlative in its craftsmanship and technicalities. This year, the flagship Voutilainen timepiece receives a unique twist that has all to do with how time is read. The new Vingt-8 ISO, first introduced at SIHH, is like a regular Vingt-8 until you realise it isn’t. Here, we shed some light on the mystery (and mischief) that is the Vingt-8 ISO. The man behind the Vingt-8: Kari Voutilainen

The Vingt-8 ISO, like most Voutilainen timepieces, comes in several variations and is customisable. The particular one that is in review here has an 18 k white gold case. The case measures a diplomatic 39 mm in diameter and 12.3 mm in thickness – neither petite nor oversized. The three-part case is entirely polished and features the brand’s signature teardrop lugs. The highly nuanced case, along with the vintage-inspired lugs, confers to the watch an unmistakable charm, one that matches the flair of the dial. Not a millimetre of the case is dull. It is nuanced, with an equally interesting set of lugs.

The dial, which is crafted from silver, is unabashedly the highlight of the watch. Kari Voutilainen is well-known for creating some of the most elaborate engine-turned dials in the industry and the Vingt-8 ISO is further testimony of that. The dial centre is engraved with a basketweave motif while the hour track and the seconds sub-dial at 6 o’clock are decorated with intricate clous de Paris. While the hours are marked by baton appliques, the minutes and seconds are displayed with white printed Arabic numerals and dots. The open-tipped minute hands used in the Vingt-8 ISO, as well as other Voutilainen timepieces, are some of the most remarkable we’ve seen on any dial. They are meticulously handcrafted from gold, bevelled and extensively polished. The same goes for the counterbalanced lancet-style seconds hand – the number of polished facets that adorns it beggars belief. Voutilainen dials are works of art and this one is no exception. A mix of basketweave and hobnail engraving decorates the surface of the dial.

Where things start to get weird is when one tries to read the time. Everything looks in place at first glance, but time ‘flows differently’ on the Vingt-8 ISO. The hours are indicated normally by the hour hand but the minutes are read based on the angle formed between the minute and hour hands. Confused? So were we when we were first confronted with this curious Voutilainen novelty. That confusion then became a chorus of ‘ahhs’ as Mr. Voutilainen and his assistant explained the concept behind the novel time display. You see, at the top of each hour, the minute hand superimposes the hour hand; this is true for every hour and not just twelfth hour like in a conventional timepiece. On every half hour, the minute and hour hands point exactly opposite relative to one another. Basically, to tell the minutes on the Vingt-8 ISO, just visualise the hour hand as the twelfth hour marker and read the minutes based on the angle that is formed between the two hands as you would on a regular timepiece. For example, at 3 o’clock, the hour hand points to 3 while the minute hand lays on top of it as opposed to pointing to 12 – on a regular watch this would look like 3:15; at 6.30 the hour hand points between 6 and 7 (as is usual), while the minute hand would form a 180 degree angle relative to the hour hand, pointing between 1 and 2. The peculiar time display on the Vingt-8 ISO takes inspiration from the work of world-renowned psychologist and Nobel Prize laureate Daniel Kahneman. Kahneman describes the two different ways our brain form thoughts: System 1 and System 2. Telling time by looking at a regular wristwatch is a result of a System 1 activity; a glance suffices because the ‘code’ is so familiar that in an instant you know the time without having to think twice. The Vingt-8 ISO counters System 1 and requires System 2 thinking where time-telling becomes more than just thoughtlessly recognising the position of hands. More thought and time must be expended to tell time. The ideal is that this helps create a more intimate relationship with the watch. There are, however, moments when the time is needed statim. This is where the role of the minute track comes into play. The minute track is printed on a chapter ring which rotates at the same rate as the hour hand – if figuring the time out based on the angles formed by the hands becomes too troublesome, the actual minutes can be read off instantly from the minute track. Cynics of the watch, however, may feel that the method of time display on the Vingt-8 is nothing more than a pointless gimmick. Regardless, it is ultimately up to the wider community (and potential clients) to decide what the Vingt-8 ISO should be thought of as. The Vingt-8 line of watches is powered by the in-house designed and manufactured Calibre 28 (hence the name of the watch). A variation of the Calibre 28 which displays time in the ISO format is fitted into the Vingt-8 ISO. The 33-jewel movement measures 30 mm in diameter and 5.6 mm in thickness, and has 65 hours of autonomy when fully wound. The most eye-catching element of the movement is perhaps the large free-sprung balance wheel. Measuring 13.6 mm in diameter, it is equipped with rose gold timing weights and beats at a very hypnotic 18,000 vph. The balance is serviced by Voutilainen’s patented direct impulse escapement with two escapement wheels. This escapement is extremely efficient and requires much less energy than traditional lifting escapements, offering benefits in terms of longevity and stability in day-to-day use. The balance wheel occupies significant real estate in the movement and is absolutely hypnotic to watch.

The main plate and bridges of the movement are rendered in ‘German silver’, a nickel/copper/zinc alloy. The finishing on these components are excellent; Côtes de Genève on the bridge surface, polished bevels on the edges with internal and external angles, circular graining on the main plate – they are all executed to the exceptionally high standards of Mr. Voutilainen. Meanwhile, all the wheels on the gear train are crafted in rose gold which is not common practice in the industry. They are completely flat and high-polished to a stunning sheen. Also spectacularly polished are the screw heads on the bridges as well as the imposing balance bridge. These meticulous finishes and decorations elevate the Calibre 28 from a solid mechanical movement to a resplendent work of art, one worthy of acclaim. Thanks to the anti-reflection-treated sapphire crystal case back, the movement is available for the viewing pleasure of the lucky owner. Finishing is the greatest selling point of each and every Voutilainen timepiece. Few in the industry can match the level of finishing afforded to a Voutilainen, let alone outdo it.

With or without the ISO time display, the Vingt-8 is objectively a remarkable timepiece. In relative terms, it is comparable to the works of Laurent Ferrier or even Philippe Dufour. The introduction of the mischievous ISO time display into the quintessential Vingt-8 is a welcome sight in an industry that often takes itself too seriously. The Vingt-8 ISO in white gold with blue engine-turned dial is priced at SGD136,500 or around CHF89,000. This is no doubt a heavy price to pay, but such is the cost of perfection in independent watchmaking today. 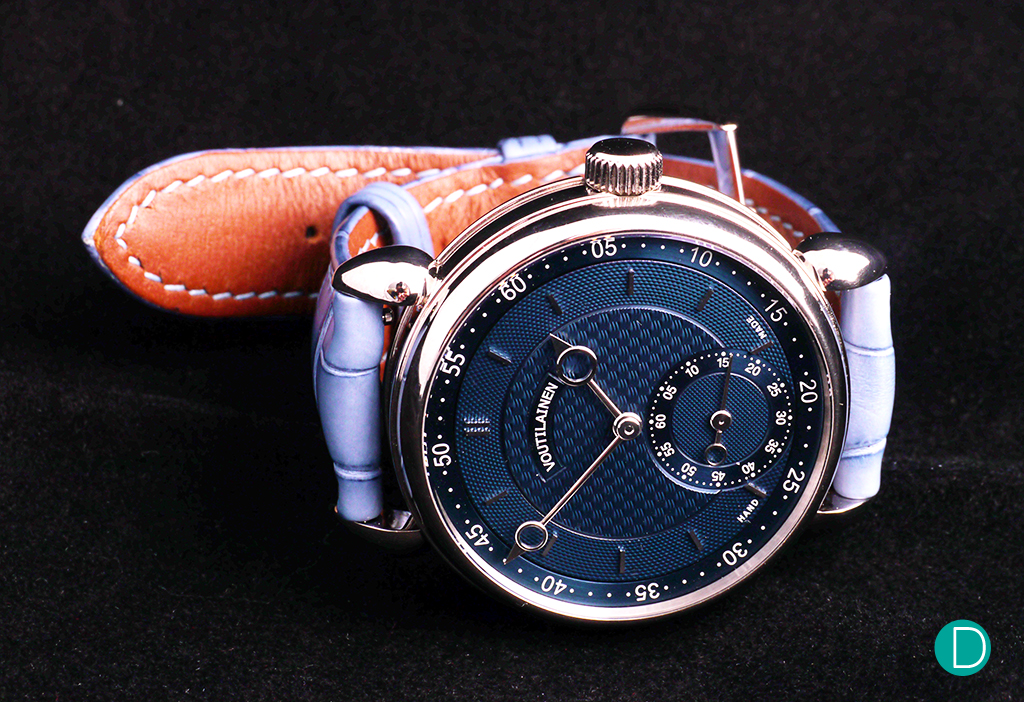 What is the price of perfection? Pretty high, as it turns out.

There aren’t too many wristwatches in the market today that challenge the way we read time. One watch that utilises a somewhat similar idea (but not really) to the Vingt-8 ISO is the Franck Muller Crazy Hours. Like the Vingt-8 ISO, the Crazy Hours redefines how time is read. What the Vingt-8 ISO does to the minutes, the Crazy Hours (sort of) does to the hours. Using a jumping hand, the Crazy Hours displays the hours on the dial in a completely different order to that of a regular timepiece. One therefore cannot determine the time merely by recognising the positions of the two hands. While the minute hand follows a traditional 60 minute cycle, the hour has to be read from the number indicated by the hour hand. In the photograph below, the time indicated is 3:37, not 11:37. The Crazy Hours is a fantastic way to add a little ‘crazy’ into your daily routine. While it is not nearly as well-finished as the Voutilainen, the Crazy Hours (Ref. 5850 CH; white gold) represents a solid, more affordable alternative for collectors seeking a playful timepiece, at SGD40,104.

The Franck Muller Crazy Hours may be quirky, but it is also beautiful and – most importantly – unique.

The next timepiece, strictly speaking, doesn’t challenge the conventions of time-reading, but rather, time display. Nevertheless, it is just as bamboozling as both the Vingt-8 ISO and Crazy Hours. The Harry Winston Opus 3 is the brainchild of Vianney Halter. Originally launched in 2003, the Opus 3 was dogged by crippling technical issues which resulted in a 7 year delay before its first delivery in 2010. Harry Winston’s (and their clients’) patience has since paid of with the Opus 3 attaining cult status within the watch community. The timepiece with its novel digital display using 6 portholes more often than not draws curious and confused looks from onlookers. The numbers in blue (top left, top right) are for the hours, black for the minutes (bottom left, bottom right), and red for the date. What really makes the Opus 3 stand out though is its never-before-seen countdown feature; more specifically, the upper left hour display changes into a four-second countdown to herald the next minute. There is no doubt that the Opus 3 is a sublime timepiece – the catch is, it’s long been sold out. The original price of the watch was USD80,000 though it has since been sold for more than double the price in auctions. The new Vingt-8 ISO is not “yet another dial change” that the brand is notorious for – it introduces a refreshing, non-cosmetic twist to the established Vingt-8 line of watches. While the ISO time display is likely to remain an acquired taste, there is plenty much else to love about the Vingt-8 and that is its impeccable design and craftsmanship.