As independent watchmakers go, Kari Voutilainen is one of those whose work is highly respected. The Deployant team caught up with him in BaselWorld 2014 and again in Singapore.

As we had known each other for years, we dived straight into discussion. Here is a brief of our discussion, with photographs of the magnificent Tourbillon-6 which he unveiled in BaselWorld 2014. Limited to only 6 pieces worldwide, the watches are available with different dial combinations, as is typical of Voutilainen watches. Voutilainen Tourbillon-6 in platinum. Only 6 pieces in this limited edition in platinum and gold. This piece, in a guilloche dial with two tone blue annealing treatment.

We began with where Kari gets his inspiration for his watches, and if he had a chance to meet any watchmaker, living or past, who would it be?

Without hesitation, but in characteristic Kari style, he smiled with his eyes, and took his time to pick his words carefully, but Abraham Louis Breguet was the man who he would most like to meet. With little prodding, Kari added that he admired Breguet not only for his exceptional skills and innovative mind on watchmaking, but also the way he led his team and marketed his watches. Remembering that Breguet lived and prospered during the French Revolution…when France was literally in civil war, and how he managed to sell his watches during those times. What would he say to Breguet? What would he ask? Well, Kari says he would not only question Breguet on technical aspects like how was the cylindrical ruby on the Ruby Cylinder watch made, how was it fixed to the watch? He would also ask Breguet how he trained his watchmakers? Who made his tools? How he arranged his business to be profitable. Voutilainen Tourbillon-6. Another specimen with a white dial. For some reason, we preferred the version with the white dial, perhaps a nod towards a more discrete watch.

We also asked Kari what he felt was the golden age of watchmaking, and if it had past, yet to come, or happening right now.

He agreed with most historians that the golden age was from the mid 19th century to about 1920. Many innovations, industrialization occured within the watchmaking world, as it did elsewhere.  But he also felt, we are right now in another golden period. The use of new material like silisium, and the use of industrialized manufacturing methods like CNC, 3D printing and the like are advances he quoted. However, he maintained that like the watches made in the days of Breguet, innovation must support that watches made should be able to be completely disassembled, and rebuilt. As such he cast doubt on having silisium parts in his watches. As a silisium balance spring cannot be fixed like a watchmaker can re-bend a Nivarox or metallic balance spring.

Another example he brought up was the use of components originally intended for big industry, and adapted for watches. Electronic components are cases in point. Even for companies as large as Omega, it is now clear that components used in the manufacture of the Megaquartz watches, popular in the 1970s and now very collectable, are now defunct and unavailable. So a broken Megaquartz would not be repairable. Another example is the case of the Bulova Accutron.

He feels that classical watchmaking must strive for the opposite. At any time, the entire timepiece must be able to be disassembled and rebuilt to new specifications, and the watchmaker can fabricate any part to complete the rebuild using the traditional crafts for the watchmaker: turning, drilling and milling. 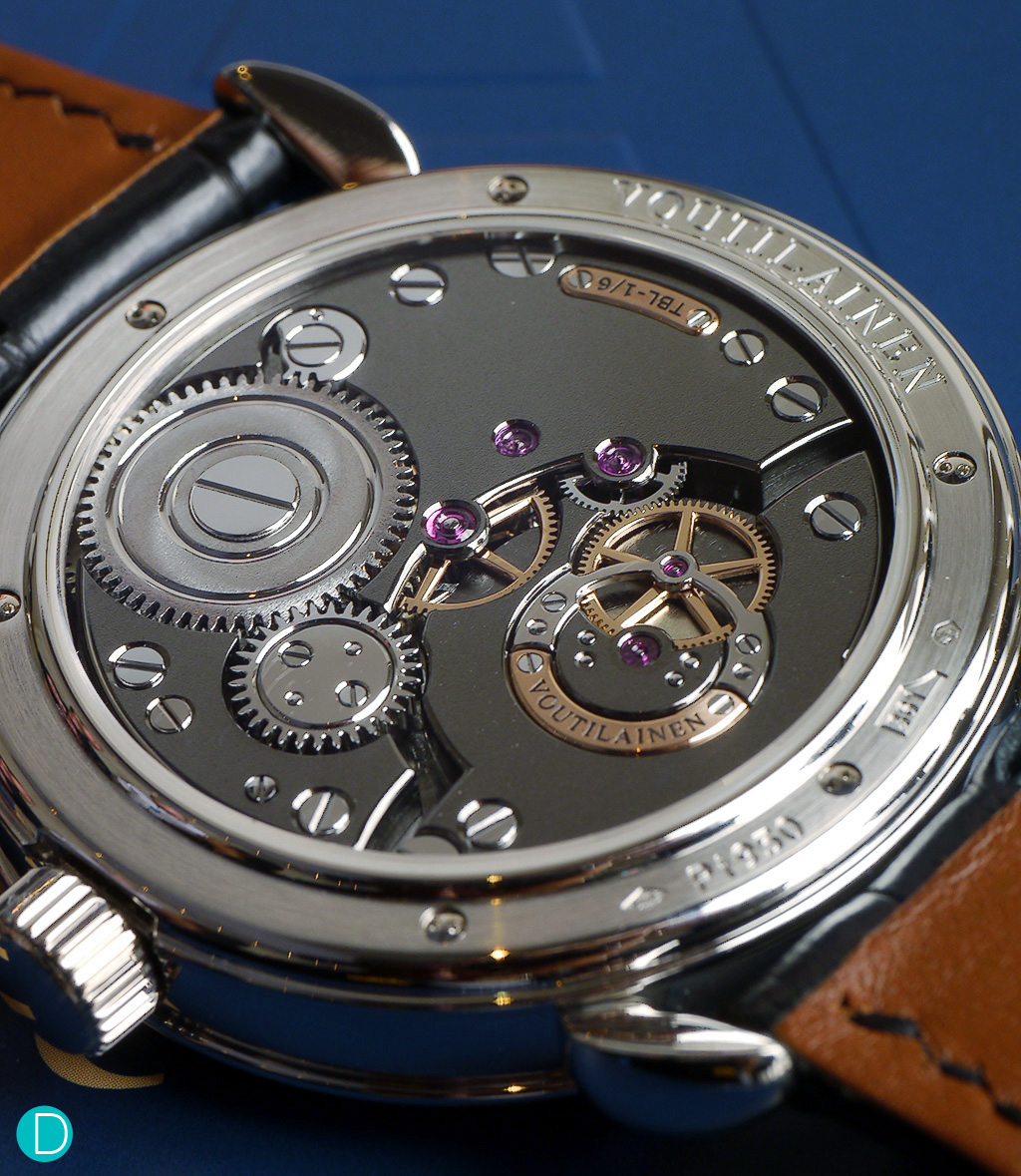 Movement of the Voutilainen Tourbillon-6. Made in German Silver, but which has been heat treated. The movement plates are heated to a high temperature for a few hours, then allowed to cool naturally. This relaxes the grain structure within the German Silver, making it softer, and easier to work with.