Although good old England is one of the first places where the art of measuring time first started, there are precious few English watchmakers practicing today. The only one to completely manufacture watches in British soil is Roger Smith running out of the Isle of Man. Roger’s watches are created in the traditional English style, following the footsteps of his master: the illustrious George Daniels. The McGonigle Brothers are Irish, and split the manufacture of their timepieces between Ireland and Switzerland, and while their watches do incorporate Celtic elements in the design, the movements are Swiss in essence. We also have Stephen Forsey of Greubel-Forsey, who manufactures completely in La Chaux du Fonds and whose watches are totally Swiss in style. And then we have Peter Speake-Marin, who is quintessentially English, but designs his watch in the Swiss tradition and manufactures in Switzerland. Today we take a look at his new Magister Double Tourbillon.

Announced in BaselWorld 2015, we recently were reminded of this rather magnificent timepiece when we receive the Press Release of the watch from Veronique Goerg, PR Manager at Peter Speake-Marin. We did spend a significant amount of time with the watch in the booth in Basel, and these are our impressions of the watch.

“The tourbillon is one of the things that I love most about watchmaking,” he says. “Not because of the precision it gives to the timekeeping, but because of the animation it gives to the dial. It shows time moving in a way that a minute-repeater or a grande sonnerie, for example, cant offer. It’s something which, for me, is quite profound, illustrating the passing of time.” Peter Speake-Marin The Tourbillon is a significant part of the Speake-Marin history. The first ever timepiece to bear the Speake-Marin name was the Foundation Watch, a hand made pocket watch equipped with a tourbillon. The visual aspect of the mesmerising escapement has a special place in Peter’s fertile imagination, and he has gone on creating with tourbillons since. He was the watchmaker who was enlisted by Harry Winston to revive the STT Tourbillon. STT was a project born out of the early attempts to make the tourbillon accessible to the average collector by reducing its complexity and cost. Its a long story which we covered as part of our review of the Preziuso Tourbillon of Tourbillons under the section: A bit of tourbillon history: Musings.

The design, case, dial and hands

As discussed in the article linked on the Preziuso Tourbillon of Tourbillons, the tourbillon is becoming a rather standard offering at the high end of the price range. To differentiate, one needs something special. And Peter’s answer is the vertical double tourbillon, featuring two 60 second tourbillons, linked by a limited slip spring clutch. The double tourbillons are prominently and artfully displayed on the dial side, and the dial is on the right of the case, and made in grand feu enamel, allowing the time to be easily read from the edge of the shirt cuff, while the tourbillons remain concealed. A discrete nod to Peter’s English origins of being understated.

The dial’s markers are Roman numerals with a rail road minute chapter ring. And the hands are classical Speake-Marin’s blued steel hands. A power reserve indicator displaying the available power by means of a cam shaped disc that opens when fully wound to reveal the movement below and gradually closes to signal empty when a red section of the disc reaches the central marker. A day/night indicator is also found below the time dial to balance the design. The Speake-Marin Magister Double Tourbillon dial is wite with roman numerals in an oven fired enamel.

The movement features mailechort bridges, perlage and ruthenium plating. The Côtes de Genève are applied to the bridges covering the movement and are rather interesting that the waves do not run in one direction but in two, away from the center of the plate. This provides an interesting visual aesthetic, especially on flash photography, when one side will appear to have the stripes, and the other plain.

As discussed, the key feature are the double tourbillons. Each of which its own independent gear train powered by its own mainspring. The two barrels are wound simultaneously via the crown. The double tourbillons, prominently displayed on the left of the case. The tourbillon carriages carry the stylized motif of the topping tool which is Speake-Marin’s calling card.

The two tourbillons, in their stylized carriages which bear the image of the topping tool which is Speake-Marin’s calling card are placed on the left of the case. The two bridges are designed to have curved arrow heads as its end on one side, and joined to each other in a curved triangle on the other. The bridge is very beautifully finished in black specular polish. The arrow heads are also similarly polished on the edges, but a differential finish in matt is applied to the inside, creating a frame. The screw is held in a similarly black polished chamfered opening. The screw heads are also black polished. The movement of the Speake-Marin Magister Double Tourbillon. As with many tourbillons which display the escapement on the dial side, the reverse is a near full plate concealing most of the movement. Note the left cage is engaged to the top canon wheel, and the right cage to the bottom canon wheel. The equalizing spring is between the two canon wheels, and attached to both. Each wheel rotates with its respective tourbillon and this spring is tensioned when the rates of the two regulators differ, or if subjected to asymmetric shocks. This equalized rate is carried to the  blued steel wheel in the motif of the trademark topping tool. As is typical in a wristwatch, this is indicated as the rate as the hour hand on the other side of the pinion.

The case is the classical Speake-Marin Magister case, cylindrical with straight lugs. The case is styled to have a stepped bezel and the lugs with a rounded end to fit and carry the screws which carry the straps. 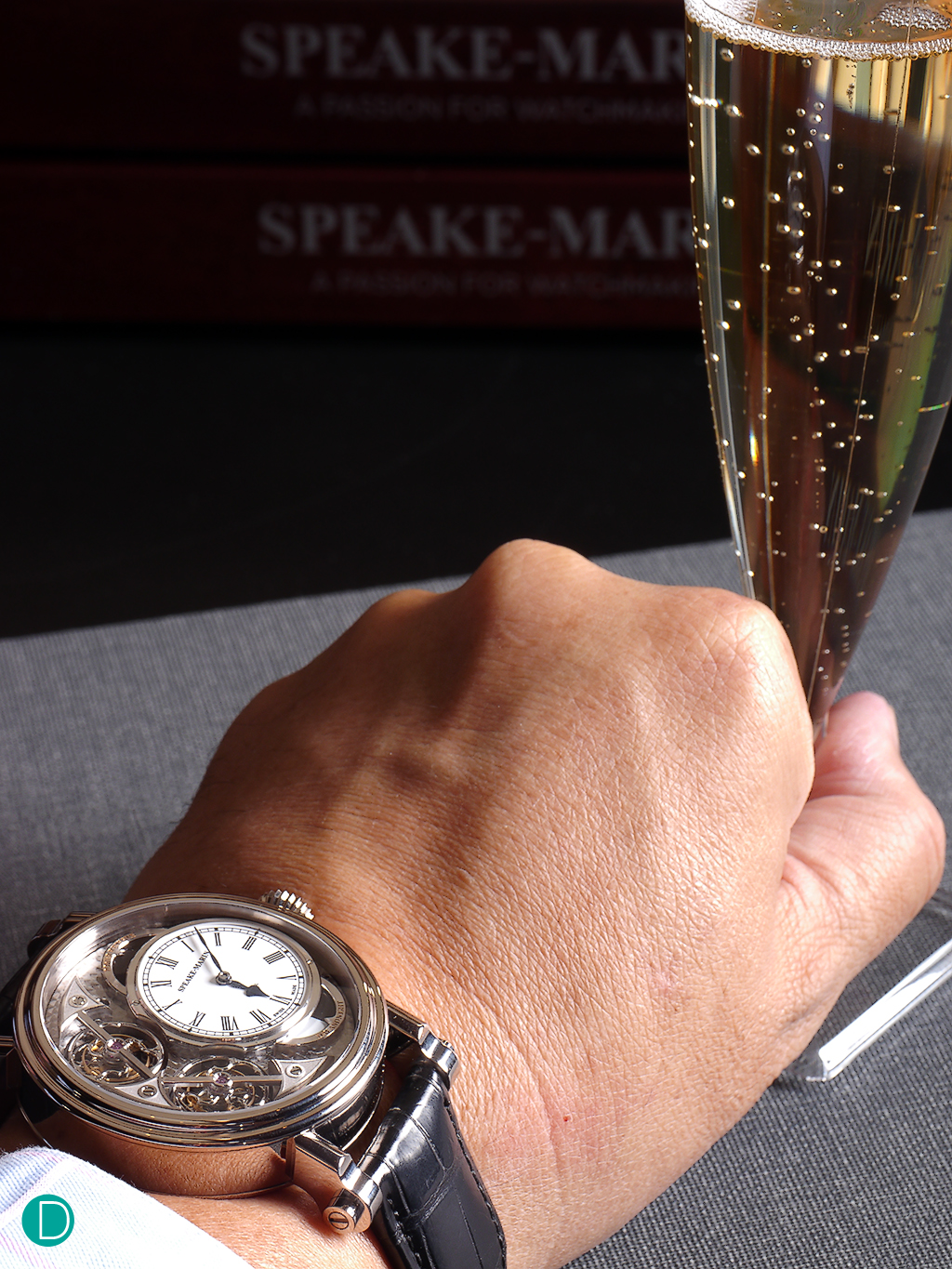 The Speake-Marin Magister Double Tourbillon, on the author’s wrist. Feels rather comfortable, despite the rather generous proportions of the case sized at 46mm diameter.

The Peter Speake-Marin Magister Double Tourbillon remains a visual spectacle. It provides the exciting visual cue of two tourbillons beating in unison, like two hearts beating in unision. Both are a thing of beauty. The technical process to achieve this is rather simple yet complicated all at the same time. “Everything should be made as simple as possible, but not simpler.” – Albert Einstein. The Magister Double Tourbillon exemplifies this.

Case, dial and hands are finished to very high exacting standards. We found the movement to be adequately finished, and found several places where more care and attention can be lavished to make it even better. The immediately visible parts framing the tourbillon are finished ne plus ultra, but yet parts surrounding the tourbillon from the caseback view, especially the edges of the bridges are left unfinished. Perhaps some room for improvement, albeit not a major one as this can be rectified easily by Speake-Marin. We also note that this may be harsh criticism as the watch we examined was a prototype, and the final customer delivery may be better finished.

To put the watch in perspective, it will retail for CHF 249’000 (no tax, Swiss price). Compare with the Greubel-Forsey Double Tourbillon 30 Technique at US$560,000. The Greubel-Forsey is perhaps more complicated as the tourbillons are built one within the other, and inclined. Or compare to the Prezusio Tourbillon of Tourbillons retail for CHF 318,000 which feature vertical differentials, but the rate determined by three tourbillon regulators. One can also compare with the more classical Breguet Double Tourbillon 5347 which retails for US$421,000. However, the Breguet’s double tourbillons sit on a plate which itself rotates, so perhaps more complicated. All of which are more complicated, and also more expensive than the Speake-Marine Magister Double Tourbillon. So does the Speake-Marine Magister represent a fair pricing? You are the judge. Peter Speake-Marin. Intense and relaxed at the same time. Recent photograph taken at a relaxed afternoon sipping beer and discussing the universe.