Within 10 years of her founding, Greubel-Forsey has rightful claim to be one of the top watchmakers in the industry.

Founded in 2004 by Robert Greubel and Stephen Forsey, the house of Greubel-Forsey is well known for multi-hundred thousand dollar watches, featuring ultra complicated tourbillons. In this article, the Deployant team had the opportunity to visit their manufacture in La Chaux-du-Fonds in the Swiss Jura to see how serious they are in the art of watchmaking.

The Greubel-Forsey manufacture in La Chaux-du-Fonds. A combination of an ultramodern glass and steel facility, visible on the photograph on the left, to a 200 year old farm house.

Some 100 people work in the company with a total production of only 120 watches, and this is indication on the amount of research and development work, the amount of production work and the detail they go into the achieve the reputation. Greubel-Forsey GMT in rose gold. The entire movement, including small components like screws are made within the premises. Every surface of every component is finished and polished, not only the parts visible, but also those hidden and the underside of the parts. Impressive.

All design and development work is done in-house within the premises. And all the components used in the watches are also made within the same factory building. As an example to the extent of in-house manufacture is done within Greubel-Forsey, we take a look at the screws used in the movement.

Not many manufactures make their own screws. But Greubel-Forsey does. The Tournos machines, modified by Elwin are used to turn tubes of steel into screws. Elwin’s and sister company Atokalpa (both owned by Parmigiani Fleurier) also makes and sells these highly finished, high end screws to the industry, but for volumes as small as what Greubel-Forsey requires, they prefer the higher degree of control enabled by manufacturing them in-house. These are individually blued to a beautiful deep hue, and each screw is polished by hand. The Elwin made Tournos turning machines which is used to make small components manufactured by turning like screws.

While making your own screw is not a critical part of making a watch, the extent where Greubel-Forsey takes to make and finish each screw which goes within each watch is indicative of the obsession this house takes on each and every component. Even the tools used to hold the components are made in-house in Greubel-Forsey.
In the photograph, the tripod tool is used to hold one single screw securely as one of the 3 legs of the tripod. The legs are used to ensure the top of the screw which is the target for polishing is perfectly level, before the manual polishing process begins. In the photograph above, the tripod is used to make the screw head abvolutely level, so that the polishing process can be made to produce perfect screw heads.
As can be seen above, the process is highly manual, and visual inspection on a microscope determines when the polishing makes the grade. 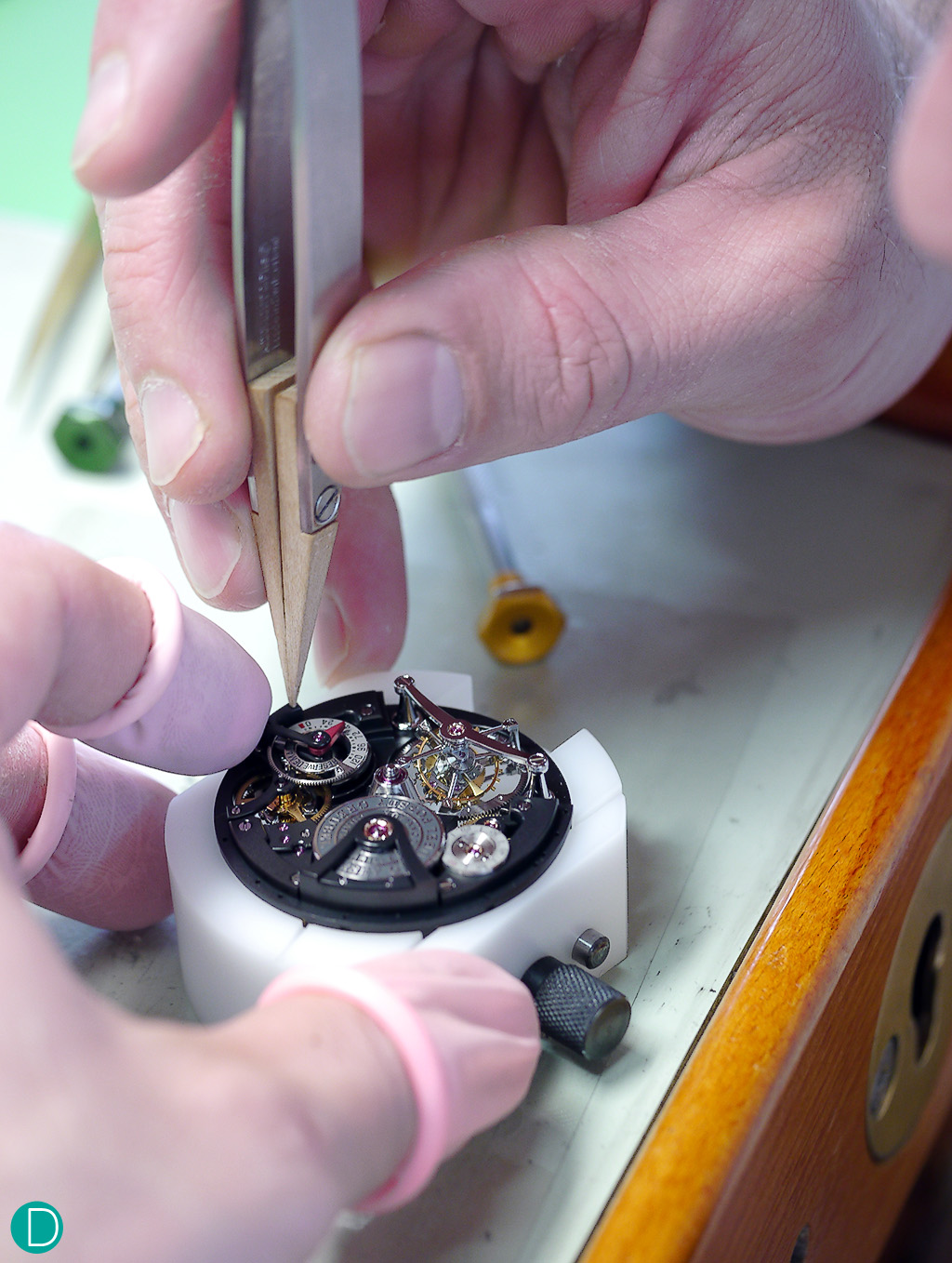 The screws are then carefully attached to the movement. Great care must be taken not to scratch and mar the highly polished surface of the screw and other movement surfaces.

The result of this obsession, which, of course extends beyond just making screws, but to every tiny detail are magnificently beautiful watches. Each a miniature 3 dimensional art piece, with depth, visual artistry combined with great technical virtuosity. The Greubel-Forsey GMT. One of the many examples of tempering artistry, visual aesthetics and technical virtuosity into one package. Detail of the Greubel-Forsey incline tourbillon. Note the high level of finishing on the tourbillon cock, which is opened to allow the viewer to have an unblocked view of the inclined tourbilllon, and allow the watchmaker to show the finishing artistry on the bridge itself with the sharp anglage and inward angles within.