A little bit of history

We consider the Patek Philippe Ref. 3940 to be the reference standard for the modern Patek Philippe as well as for the classical perpetual calendar. It first debuted in 1985 (together with the other Patek icon – the Ref. 3970), while the industry was still in the throes of the Swiss economic turmoil. It was described as the quintessential Patek. Pure design, classical 36mm case, and now iconic and much copied dial layout. It was one of the first complicated watches that Patek produced in series. Earlier complications were typically special orders. And it was one which guaranteed Patek’s place in the history books. It was a watch that we have seen on the wrist of Philippe Stern himself. Not the watch of the year flavor, but year in year out. In Baselworld and when we met him during his travels around the world. For decades. We won’t be surprised if the 3940 is still his daily watch today. The Patek Philippe Ref. 5140 still lives in the form of the platinum version with a black dial shown here.The squashed 27 and 5 on the date ring is clearly visible.

It is larger…37mm. This is a mere 1mm gain in diameter, mostly shown on the bezel, but it throws the perfect proportions of the 3940 out the window. At this level, we are talking about nuances, and tiny changes make big differences. It had a came at a time when the pressure was being felt from across the German border. A. Lange & Söhne had just begun to gain popularity, and the attention of the cognoscenti. This new recognition and muscling in at the top end started to put pressure on the grand old dame. Interestingly, Lange had introduced the Langematic Perpetual in 2000 at Baselworld, and it had a dial layout which took reference from the Ref. 3940.

During its release in Baselworld 2006, many of us remarked the similarity of the new case to that of the Glashütte challenger. Design wise, the Ref. 5140 was received with mixed feelings. The date was a subdial around the subsidiary seconds hand at 6 o’clock like it had been on the Ref. 3940. But for some reason, Patek designed the numerals 5 and 27 to be smaller than the other dates. It looked like these were being squashed. Furthermore it retailed for US$ 91,000 when the 3940 hovered around the US$ 35,000 mark. Of course, we note that from 2001 till about 2008 or so, we saw the almost relentless upward spiraling of watch prices, each Baselworld/SIHH seeing the introduction of mega-buck watches by the dozens. Punters quickly snapped up the last remaining 3940s in 2006, and drove secondary prices up.

So with great interest, we watch the unveiling of the Patek Philippe Ref. 5327 in Baselworld 2016, priced below the retail price of the Ref. 5140 at its introduction. Patek communication was filled with the news of their Annual Calendar, celebrating 20 years of its invention by them. The press release did not even contain a page on the new Ref. 5327. But we think it is significant, and bring you this narrative. 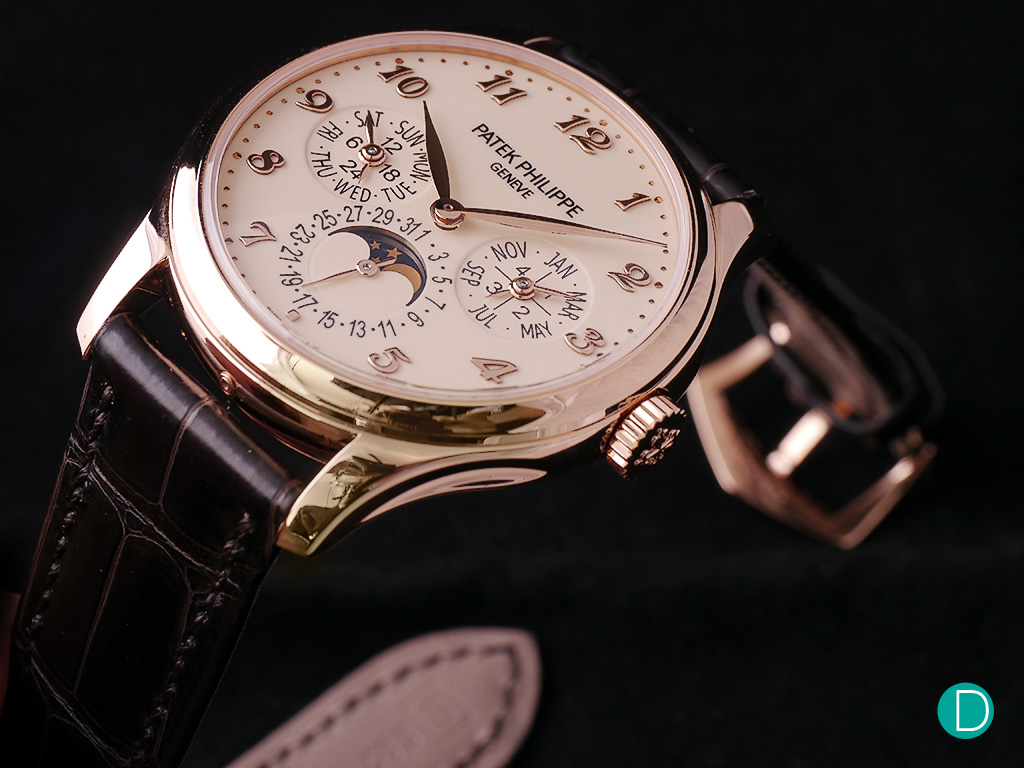 The Patek Philippe Ref. 5327J in yellow gold, with a magnificent ivory lacquered dial.The color on the photograph does not reflect the true hue of the case, somehow it was captured to be more pale than it is. And the dial looks a bit too pink when compared to real life. Ah, the joys of on-site digital photography.

The case is now enlarged once again, to 39mm. But this time, Patek did it right. Proportions were back to the near perfect balance. The case looked harmonious. From the side, the lugs feature a shallow hollowed up scallop which provides the visual impact of a lighter, more svelte looking case. Beauty restored. Side profile of the Patek Philippe Ref. 5327 showing the scalloped lugs.

The use of appliqué Breguet numerals filled up the dial beautifully. If you remember, the Ref. 3940 and the Ref. 4130 both had appliqué bar markers for the hours. Is this significant? Well, historically Patek reserves Breguet numerals for their high end complications. But this Baselworld saw a slew of watches featuring Breguet numerals, including the Annual Calendars.

And gone are the squashed 27 and 5. The entire set of numerals for the date are now equally sized, and harmony is restored in the universe. The dial. Quite magnificent. Although the classical layout demands a lot of data to be displayed, the tested layout first debuted in the Ref. 3940 played out well, and the dial, though cluttered, is clean and legible.

The hands are now the graceful feuille hands (also known as leaf shaped hands), replacing the Dauphine styled hands in the earlier iterations. And the dial, especially the ivory lacquered versions on the yellow gold and rose gold versions are particularly charming. The lacquer is smooth, and one can almost feel/taste the creaminess of the dial. Exquisite. We did not get to see the blue dial version in our time with the watches in the Patek booth in Baselworld 2016, so reserve comment.

Patek decided to retain the C.240Q in the newest Ref. 5327. This movement debuted with the Ref. 3940 in 1985, and have seen minor improvements over the years. It was used again in the Ref. 5140 where it saw a major makeover. This was the introduction of the Spiromax® hairspring.

A new development at that time, silicon parts were pioneered by CSEM in Neuchatel, Switzerland in an exclusive collaboration with Patek Philippe, Rolex and Swatch Group. This was the first commercial applications of silicon in mechanical watches. 2005 saw its use in many watches by the collaborating brands (except Rolex who only introduced silicon in 2014). For Patek this was introduced as their  Silinvar® escape wheel, manufactured from silicon.

This followed in 2006 with the hairspring, which Patek dubbed Spiromax®. The new balance spring is totally non-metallic, and hence non-magnetic, the entire spring could be manufactured as a whole component using DRIE. Each Spiromax® hairspring is exactly the same, so Patek is able to eliminate the tedious tasks in pinning, forming, and adjusting each and every hairspring. Even the formation of the terminal curve, which used to be performed by hand one at a time is now made using the DRIE process.

The Spiromax® hairsprings have also been designed to compensate for the thermal expansion of the Gyromax® balance wheel. As the balance wheel expands with increased temperature, the Spiromax® automatically adjusts to maintain a regular frequency of the oscillator. But we lament that perhaps the might of Patek Philippe would have invested in a new perpetual calendar movement. True, the C.240Q is a truly classical perpetual calendar. But it is 31 years old, and in the intervening years, upstarts like Ulysse Nardin have made major improvements over the classical design. As far back as in 1996, the Ulysse Nardin Perpetual Ludwig had the capability that the entire calendar can be adjusted from the crown, and with complete freedom forwards and backwards. The Perpetual Ludwig was also the epitome of dial design. The layout, even though complete with a perpetual calendar looked very simple and clean. Ludwig Oeschlin was to reprise this in the recently released Och und Junior Perpetual Calendar.

Later, the perpetual calendar design was further advanced by Moser in their Perpetual 1, introduced in 2006. The flash calendar system improves on the simplicity and clarity of the Perpetual Ludwig’s dial design by moving some of the display to the back of the case, visible through the sapphire case back. But more importantly, the great leap forward was made with an instantaneously jumping calendar. The Perpetual 1, in our mind represents the current state of the art for perpetual calendar design. One obvious upgrade is the Spyromax balance introduced by Patek in 2006. This silicon hairspring was not available in the C.240Q when introduced.

However, finishing in the Ref. 5327 continues to be top drawer as one would expect from a top end Patek. All the traditional finnisage are addressed with aplomb, with little left to be desired. The only nitpick on the C.240Q is the lack of sharp inward and outward angles on the bridges, but that criticism has been there since the Ref. 3940. Patek had chosen to round off the bridge edges, and though the anglage is superlative, the work needed to finish the edges is simplified by not having to cater for the angles.

Priced at US$82,784 for yellow gold, and US$85,052 for white gold and rose gold, we think the Patek Philippe Ref. 5327 is competitively priced. A quick survey of the field confirmed this, and the pricing is about the same level as offerings from Lange, and Vacheron Constantin, and much less expensive than MB&F’s LM Perpetual or the Greubel Forsey Quantième Perpetual à Équation. A. Lange & Söhne Langematic Perpetual Calendar (US$ 82,500 in gold. Lange prices for pink gold and white gold are the same). First released in 2000, the series is currently available in platinum, pink gold and white gold. The dial layout is similar to the Patek, the case is already sized 38.5mm since its introduction, and it never had the growing up throes that the Ref. 3940 had with the Ref. 5041. The hour markers are Roman, and some critics have expressed that the cut off numerals at 4, 6 and 8 are distressing, but we find these perfectly harmonious.

Movement finishing is at least equal to the Patek C.240Q, but most enthusiasts would argue that Lange’s finishing is even more elaborate, and the resulting view from the case back is breath taking.

We think the Langematic Perpetual is perhaps the closest competitor to the Patek Ref. 5327.

We throw in the IWC Portugese Perpetual Calendar digital date month edition 75th Anniversary (US$ 52,700 in rose gold) to offer a perspective. This is a handsome watch, but very large at 45mm in diameter. The use of digital display for the date and month changes the dynamics on the dial layout, making for a more legible design. The movement finish is less detailed than the Patek, and though the retail price is lower, the resale value in the secondary market will unlikely rival that of the Patek.

Our sole lament is that we would have loved to see a new, modern perpetual calendar design like that shown by the UN Perpetual Ludwig or even best the Moser Perpetual 1. We are sure Patek Philippe, being Patek Phillipe can muster the resources and expertise, and we hope to look forward to seeing a new perpetual calendar soon.

Having said that, we see the main rival as the Langematic Perpetual, which is also based on an old perpetual calendar design, and in that sense, they are closely matched. Although we might nod our collective editorial heads over to the German camp, the winner from that match is one of taste and preference rather than one of superiority of one watch over the other.