Regardless of how large or significant one’s collection is, Casio is probably one of the few brands of watches that most of us have owned at least once in our lives. Casio is also known to be robust and solid, and it can be easily relied upon whenever we need a timepiece for outdoor activities. Besides, it is rather handsome as well.

Over the years, Casio had diversified its offerings. While its target market is still in the segment where prices hover under S$500, but it does not necessarily mean that they are not venturing into the other segments.

Moving from the usual product base, Casio had initially introduced the more exclusive G-Shocks back in 1996. The collection – named the MR-G – was then incepted. The model features a full metal construction, and they were released between 1996 to 2001. The collection took a short hiatus for a couple of years, but it was revived again in 2003. Finally, in 2015, the new MR-G series which we are more familiar with was launched. This year, Casio launched a new model of the MR-G collection. The watch is named the MRG-G2000HA “Tetsu-Tsuba“, a watch that drew its inspiration from the art of traditional Japanese sword making. What makes this particular timepiece special, and what is the reason behind its nearly S$10k price tag? Let’s find out. A close-up on the detailing of the bezel. Note the intricate but unique pitting on the component itself.

The process begins with the moulding of the components (in this case the bezel and bracelet) from forged titanium, before it is being cut out into a shape that is desired. Next, the components are being hammered to give rise to its signature pitted texture. This is achieved by the use of an iron chisel tip and hammer. As the process is manual, and the fact that each knock is done with a different amount of force, the pattern that is created on the components are unique. The pattern is called arashi-ji, which is translated to “rough surface”.

Following the creation of the patterns, the components then undergo a process of deep-hardening. Casio also employs the AIP (Arc Iron Plating) technique to further enhance the protection of the decorated bezel and bracelet link. This also gives the components the copper colour – similar to the colour tones that are found in the alloys of traditional Japanese metal crafts. Interestingly, the other components of the watch, such as the main case and outer bracelet links, are treated with violet API to produce the stunning murasakigane (purple violet) tone. This is done by adding gold to copper. Purple, notably, is also considered as an aristocratic colour in traditional Japanese culture. The combination of these two tones definitely gives the watch an unusual but exquisite contrast. The side view of the G-Shock.

The 49.8mm titanium timepiece is certainly a sight to behold. Granted, not everyone can appreciate the intricacies behind the pitting techniques, but the watch had definitely received plenty of compliments on the way it looks. Besides, its massive case means that the G-Shock still maintains its wrist presence. While it might be a little different from the usual offerings, the MRG-G2000HA is still easily recognisable as a Casio G-Shock – and a beautiful one at that. 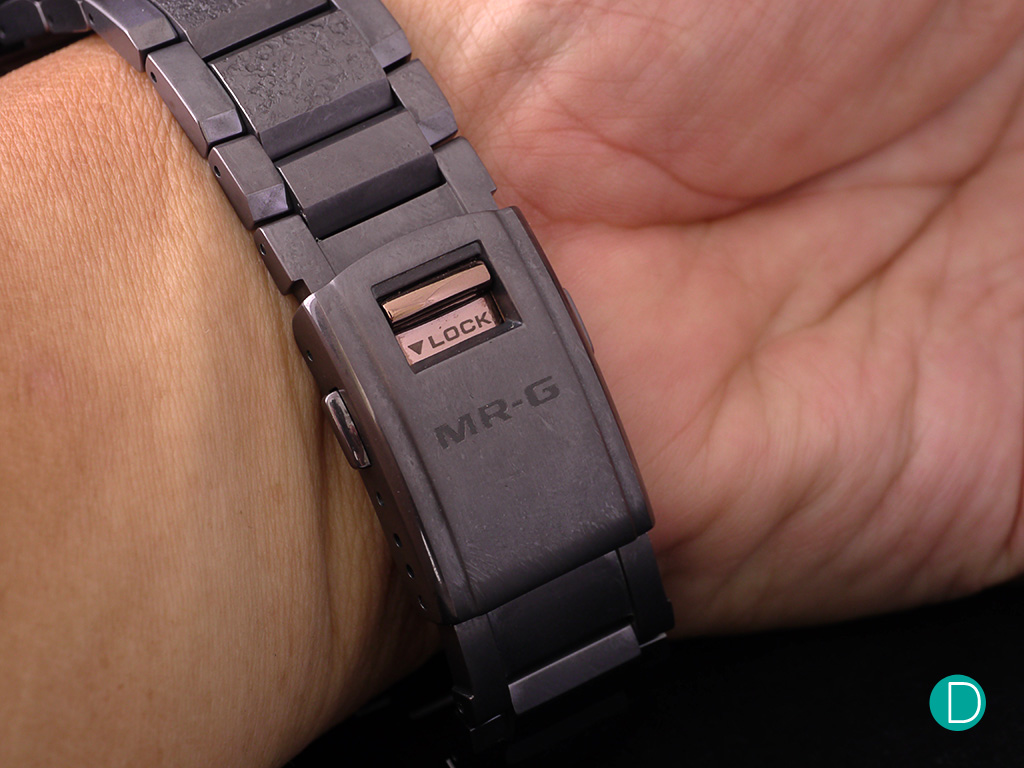 The Dial, Hands, and Functions While the MRG-G2000HA’s main highlight is its intricate handiwork, the timepiece is still a functional piece through and through.

The G-Shock MRG-G2000HA is not just a pretty face. The watch, similar to its brethren, is certainly a highly functional device. Besides the usual timekeeping functions, the MRG-G2000HA has a dual-dial world time which displays the time in two different time-zones simultaneously. It is capable to switching between 39 cities (or time-zones) as well, which adds a nifty touch to the feature. The cities are indicated at the window on the 3 o’clock position.

The sub-dial at the 9 o’clock position is slightly interesting. The top of the sub-dial displays the day of the week, although the function is over-ridden when the watch is on the “travel mode”, as indicated by the plane icon. Moving downwards, there is a portion with the letters “L, M, and H”. This indicates the amount of power left on the watch. The MRG-G2000HA is operated by a solar-charging system, in which it obtains its energy from the sunlight, and a “L” reading signifies that the watch would require some source of light to charge the solar battery pack. The caseback of the MRG-G2000HA. Note the different features that were proudly engraved on the caseback.

Additionally, the watch is also fitted with the Connected Engine 3-Way module. This means that the MRG-G2000HA has GPS, terrestrial radio wave, and Bluetooth connectivity. This allows the watch to receive receptions (either automatically when detected, or manually) for time-calibration, as well as to connect to the App on the mobile phone for additional features. This is a neat touch, especially the former as it helps to keep the timing on the watch accurate – where ever in the world.

While the dial and the plethora of functions might seem a bit intimidating, but one will certainly get use to the functions as one spends more time with the watch. Of course, most of us would not use all of the functions that the MRG-G2000HA possesses, but some of the features are rather handy and they can be useful when the appropriate situation arises.

The MRG collection had certainty changed our perspective of Casio. However, this particular MRG-G2000HA had certainly took it a notch further. When one thinks of a Casio G-Shock timepiece, the rugged and sporty rubber and plastic digital watches will certainly come to mind. Those watches are utilitarian and solid, but they are merely devices that serve as a function to tell time (and of course, the other features such as chronographs, alarm, and so on). This particular timepiece is not just that. It combines both form and functionality – the former is simply a magnificent work of art on its own. The craftsmanship is so beautiful that we cannot help but to always take a second look at the watch, after we have taken note of the time. On top of that, under different lighting conditions, the watch exudes a different shade of copper and purple. It is admittedly rather stunning. Another noteworthy point to mention is the ergonomics of the MRG-G2000HA. Despite the fact that it is a massive watch, but it feels very comfortable when it is worn on the wrist. This is perhaps due to the design of the integrated bracelet, in which its lugs are designed to follow the contours of the user’s wrist. On a separate point, the bracelet feels very solid and well-made too.

While its price point is slightly steep at S$10,880, but the G-Shock MRG-G2000HA is probably one of the finest timepieces from Casio. It is truly one-of-its-kind, and its closest competitors are perhaps another two timepiece from its repertoire that we have written about previously: the MRG-G1000HG-9A Gold Hammer Tone 20th Anniversary (Retail Price: S$9,299), as well as the G-Shock MRG-G1000HT (Retail Price: S$8,888). These two pieces are great, but we reckon the MRG-G2000HA stands out with its contrasting colour scheme (copper and dark purple). An obligatory wrist shot. Despite its sheer size, the MRG-G2000HA is pretty comfortable on the wrist.

Only 350 pieces of this timepiece will be produced worldwide; available in stores from May 2018. It is one of the most well-made Casio G-Shock that we have seen, and we are certain this is something that will appeal to many G-Shock fans, as well as high-end watch collectors who appreciates such intricate craftsmanship.