We introduced Hajime Asaoka in our feature article from Baselworld 2014, waxing lyrical about his Project Tourbillon. This year, we caught up with the taciturn watchmaker and present here his latest creation. Finally, a series production watch, created in the spirit of Philippe Dufour’s Simplicity. But not quite. Asaoka-san himself is somewhat shy, quiet man, preferring to keep to himself. At his booth in Baselworld 2015, he spent more time staring at his phone, probably playing games, than actively promoting and showing his new creation. I passed by his booth, trying to catch his attention to see his new watch, but I felt ignored. It was only when my friend Masanori Kondo made the approach, and spoke to him in Japanese, that I made progress. He acknowledged that he did indeed know me, and appreciates the article I wrote here on his Project Tourbillon last year. Hajime Asaoka. Despite the rather bold, perhaps slightly outlandish shirt and pocket square, this man is shy to a fault, preferring to stare at his phone rather than engage with non Japanese speaking journalists who pass-by.

He did not appear to have any press material, and it seemed to me that he was perhaps not interested in promoting or even selling his watches. I got further material for this article from another good friend and celebrated Japanese watch journalist Masayuki Hirota. Many thanks to Kondo-san and Hirota-san for the great help. I also consulted the article written by another friend, Ken Hokugo linked here. Hajime Asaoka Project Tsunami. The dial is multi part, with an applique marker 12 in art deco style. The outer hour-minute chapter ring is separate from the black dial fillet, and the subdial and its seconds chapter ring also separate. The fillet inner dial, shown black here is a very thin piece made of ESD. The subdial is in maillchort. The red seconds hand is also in ESD and the other art deco styled hands are in maillechort.

After last year’s major announcement of a ground up, very special tourbillon which we featured here, he focused his energies on a simple, three hand, time only watch. This seemed to be in the tradition of Philippe Dufour, who cut his teeth making the world’s first Grande Sonnerie for a wristwatch, then the complicated differential driven Duality before heading for the commercial jugular with his Simplicity. However, Dufour’s focus with the Simplicity was to make the best finished, most traditional (Valee de Joux tradition) wristwatch he could muster? He intentionally chose this as he has already proven himself with the ultra complications. In Asaoka’s case, it seem similar. Having demonstrated that he can build a tourbillon from ground up, he seemed intent to explore what he can do with clever machining, and use of innovative material in his version of a simple watch. He curiously named the watch, Project Tsunami and as we understand it is slated for series production and features a huge 16mm diameter balance wheel in titanium. The movement of the Hajime Asaoka Project Tsunami. The huge balance wheel, some 16mm in diameter occupies more than half the real estate of the movement.

The case itself is rather handsome, machined by a workshop in Tokyo, the case is hand finished by Asaoka. It is also interesting to note that Asaoka chose to work with a machinist shop who have no previous experience in making watch cases. The construction of the dial is of particular interest. The dial design is reminiscent of the Project Tourbillon of BaselWorld 2014, re-using some of the design elements. The dial is a multi-piece dial, and quite complicated in itself. The center of the dial is made of Extra Super Duralumin (ESD), also known in the industry as 7075 or aircraft grade aluminium. This enables Asaoka to make a thinner part of the dial. This is to create the illusion of a thinner watch. To accommodate the space constraints in the movement which resulted from the balance wheel being so large and still fit into a 37mm case, the wheel train had to be modified. Specifically, the canon wheel is offset from the normal, causing it to be slightly thicker in the middle. The thinner dial fillet in the middle help alleviate the thickness.

The subdial is in maillechort, and makes a contrasting visual to the black ESD center of the dial. The outer edge of the dial which forms the hour and minute chapter ring is yet another material which provides the dial system with rigidity needed. Note also that the dial is done in a bombe style, slightly convex to give the illusion of a thinner watch. Hajime Asaoka Project Tsunami display shows the movement in its entirety. Note the third wheel is visible below the balance wheel at approximately 6 o’clock in the photograph. This wheel is shaped like a traditional Swiss Topping tool. As an aside, this topping tool design is used by Peter Speake-Marin as his logo and trademark.

As mentioned, the movement is in-house designed and constructed. The plates are in maillechort, and finishing is quite nice. The plates are nicely anglaged on the edges, and polished. Circular graining (perlage) is visible on the main plate. And the wheels all are extensively and beautifully finished. The teeth of the mainspring barrel, shown above at about 1 o;clock itself received considerable attention. Each tooth profile is classical, and it appears that they are polished. The jewels used are large, very beautiful and appear to be flawless. 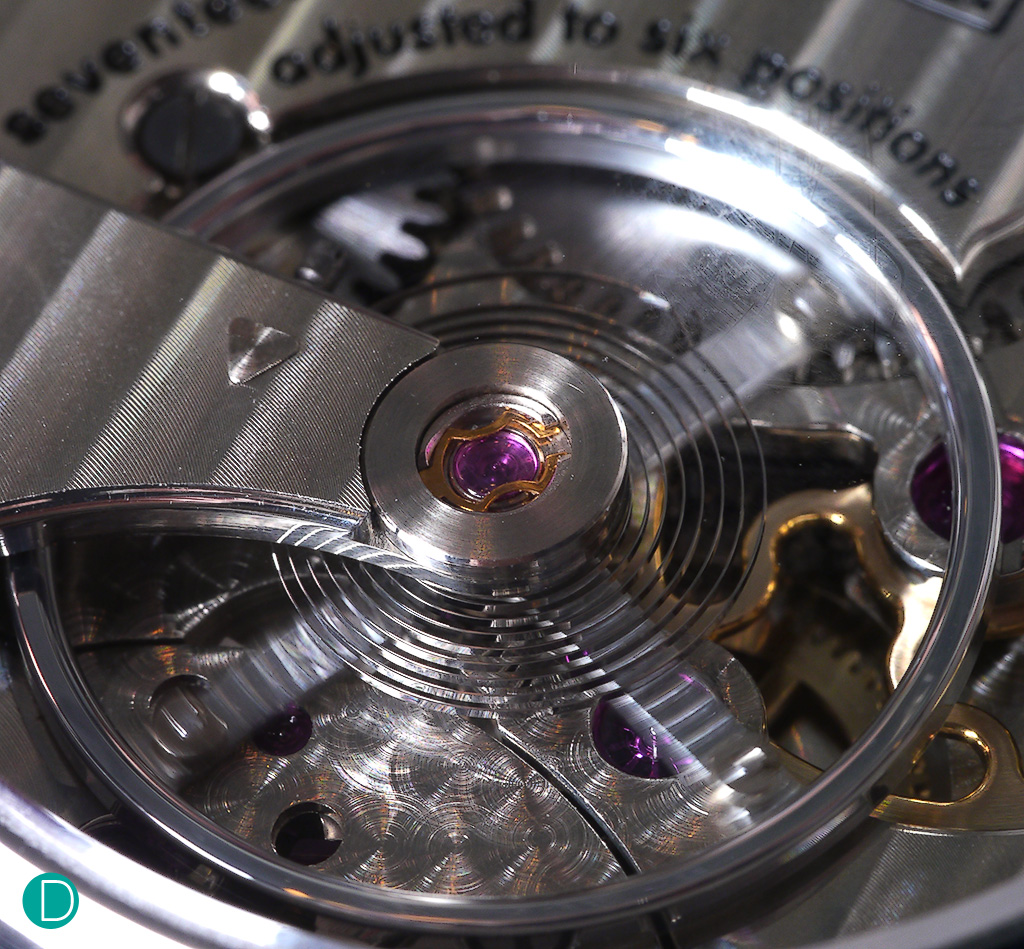 The huge balance wheel of the Hajime Asaoka Project Tsunami. Measuring some 16mm in diamter, it takes up most of the real estate in the movement. Please excuse the smudge on the glass which appears on the upper right edge of the picture.

The movement beats at 18,000 bph, a very traditional beat rate. For movements with large balance wheels this is a very common and wisely selected rate. Power reserve is also a very regular 40 hours.

The watch is not a limited edition, and the current recommended retail is €25.000 worldwide, and a Japanese domestic price of ¥2.5million. Hajime Asaoka Project Tsunami on the wrist. Very comfortable. Background is another magnificent hand made product – a brief case by Goyard.

We thought Asaoka-san showed great promise in our article on his watch which we published last year. He was then a candidate to the Académie Horlogère des Créateurs Indépendants (AHCI) in 2014, but have since been confirmed as a member. He exhibited as a member of AHCI this BaselWorld. He makes a strong proposal for a Japanese made, high end watch. The subject of this review takes his point even further.

Perhaps the Swiss industry is under threat. From the north, the Germans have been laying seige for close to 20 years, not only making claim but taking some of the honours of being the best in haute horlogerie.

From the east, big boys like Seiko are inching in as well. Through their brand names Grand Seiko and Credor already have started making waves, signifying the Japanese are knocking at the doorstep of the Swiss in haute horlogerie. The Credor Eichi gives credence to a high end, time only watch. Citizen took another route for its assualt of the Swiss Watchmaking industry by acquiring La Joux Perret and Arnold & Son.

Now Asaoka, being an independent watchmaker demonstrates he is also able to throw the guantlet with the various tourbillons and his new Project Tsunami. The hint of a Japanese watchmaking tsunami is perhaps a bit stretched for an independent to aspire to. But it is high time, the watch making and collecting world sits up, and pays attention to watches made outside of Switzerland.

We have not seen the concluding chapters of the Asaoka story yet. Even for Project Tsunami, we are still awaiting further information and details on this watch, like full specifications, limitation numbers and retail prices. Watch this space, and as we gather more information, we will publish it.

Postscript photography note: we noticed a hard sheen on the watch, which is perhaps due to the flash lighting that we used, but probably not caused by as we use the same Profoto studio flash in all our photographs.