Max Büsser and his team at MB&F are possibly the hardest working team in the horology world. The small team of obsessed talents have a prodigious output. So far this year, they have shown variations to an existing movement: the LM Perpetual Green, the Moon Machine 2, HM7 Ti , a new clock/robot: the Sherman, and now a brand new addition to their Horological Machine Collection – the HM9. On the wrist, the dial faces the inside of the wrist, much like a driver watch. The HM9 stits quite high, and may prove to be a scratch magnet.

The HM9 is the ninth edition to the Horological Machine line. The HM line is a very special line in that the watches look more like sculptures than classical watches. And there are some major icons in independent horology in the line. Like the HM3, the HM4, the HM6 and the HM7. Each unique. Each breaking the norms of traditional horology in the aesthetic shapes it offers, and the ways to read the time, but yet each powered by a classically designed movement. Though traditional in design, the movement, or what MB&F calls the engine, are always new calibers. Tthe early ones use the Girard Perregaux base with unique complications, and we are seeing that the later ones are totally ground up calibers. Quite amazing for a small brand.

Given this impressive backdrop, the HM9 appears in the limelight. At first glance, it looks like the offspring from the union of the HM4 and the HM6. The base shape looks like the HM4 with an additional fuselage/body in the middle. But the smooth flowing lines remind of the the HM6. On a closer look, it is not like either of its elder brethren. But rather one on its own. The case and external aesthetics

The case is in titanium, and two models are offered. Both in the same material and finishing. The only difference is the dial and the colour of the movement. One is called the “Air” with a dark movement and an aviator styled dial, and the other called the “Road” with a rose gold plated movement and a classic speedometer dial. Each of these debut variants are limited to 33 pieces. The case is a very complex shape, and rather organic looking, with smooth flowing lines. We say organic, but it is also reminiscent of some of the car and airplane bodies of the 1950s. Max tells us he draws his inspiration from the likes of the Mercedes Benz W196. a successful Formula 1 racing car for the 1954 and 1955 F1 seasons. And also the gorgeous Buick Streamliner from 1948. The inspiration also comes from the De Havilland Venom, a sleek aircraft which patrolled Swiss airspace during the cold war. Follow the link to see how this shapes gave rise to the shape of the HM9. The HM9 case is reminiscent of these inspirations. And is a complex combination of milled sapphire crystal and grade 5 titanium. The shape, and complexity of the design required new manufacturing standards and techniques to be developed to cope with the extreme curves and acute angles. 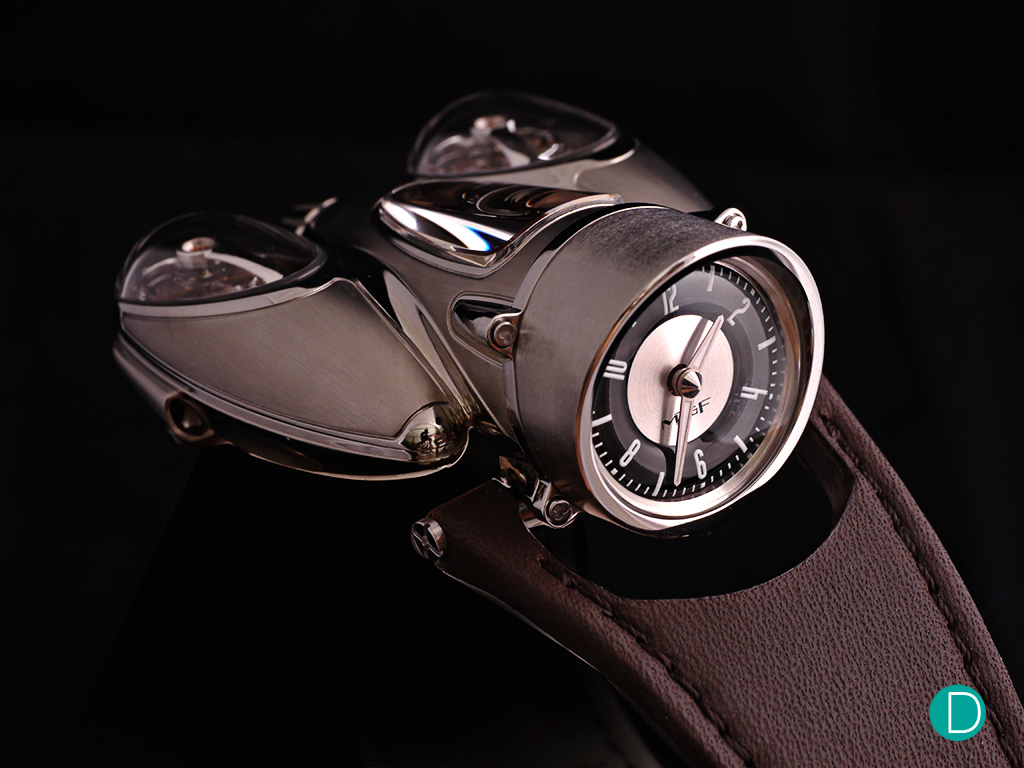 The HM9 is an exuberant, expressive design and this exploration of the space and shapes is only possible because of the restraint and spatial efficiency of the movement.

The complex titanium case is in an alternating polished and satin finishes. The independent twin balance wheels on each flank are visible under elongated domes of sapphire crystal. A third pane of sapphire glass on the central body reveals the HM9 movmeent planetary differential. The sapphire glass seem to have a magnifying effect, perhaps due to the curved shapes, and the movement parts look slightly distorted and a touch surreal through them. Quite funky. The view from the top. The differential’s conical gears are visible on the left of the sapphire glass opening. The ;two swirls housing the double balances look like the bulging rockets of a space ship seemingly at the verge of propelling the craft into hyperspace.

The dial sits perpendicular to the rest of the movement, and indicates the hours and minutes which are driven by conical gears as the motion is put through a 90° planar translation. The winding and setting crown is at the rear of the central body. The volume of the design is rather large. The watch sits rather proud on the wrist, but the proportions of the curves on the case requires the size to be limited to 57 mm at its widest point, or risk being un-wearable. This places special space constraints on the movement, which is then required to be very compact. The case bottom has an aperture on the main volume to show the gear train.

The movement is visible via two cutouts, one on the top of the case, the other on the bottom. Two additional viewing points are along the end of each side which houses and showcases the balance wheels on each side. The arrangement of the case body is an alternating arrangement of the three primary bodies of the HM9. This restricts the shape of the movement, but also creates special demands on the gasket which provides water resistance to the case. A three dimensional gasket is designed and patented for this. The HM9 movement has twin balance wheels which are connected via a central differential. The balances are individually impulsed and spatially separated so that there is no chance of resonance. Each beats at 18,000 bph. This concept was first developed in the LM2. The balances themselves are hung from cocks similar to those used in the LM series. There is no other watch quite like the HM9. Not even its own tribe comes close. Our initial reference to it being the cross between the HM6 and HM4 is lost after close examination of the watch.

For the collector of independent watches, it seems like this voluptuous, and provocative watch is the panacea to the boring round watch. It breaks all traditions. It captures the imagination derived from its inspiration of automobiles and aeroplanes. And yet, the movement powering it is totally unorthodox and unconventional. But yet remains clearly a derivative of the fine horology culture, respecting the aesthetics and working principles of haute horlogerie. For the lover of unusual watches, this is a no-brainer. Pony up the cash, and buy the HM9.