Imagine being a popular talk show host on national television. Your show airs on prime television with viewership in the millions. You give hilarious-yet-charming monologues on this week’s current affairs and conduct interviews with high-profile celebrities whom are universally adored. Being a prominent public figure has it benefits, but it also means being constantly scrutinized by the public and paparazzis alike. So, what timepiece would you select to pull off the perfect image? – after all, what you wear defines who you are. Here we have selected 6 top-tier timepieces for our recommendations: from JLC, Rolex, Lange, Patek Philippe, Audemars Piguet and HYT. They are guaranteed to pass (and impress) any scrutiny.

We will break this down into 3 segments which should be familiar to any talk show host. Each contains a chosen pair of timepieces as different situations calls for different tools. Without further ado, lets get started! We begin with one of the most iconic horological piece ever conceived. The JLC Reverso, whose Latin translation means “I turn around”, was launched in 1931 and originally conceived as a sports watch for polo players. The idea of a reversing case was intended for players to ‘reverse’ their main watch face during a game, thereby protecting the crystal from shattering. Rather ingenious. Though you’ll be hard pressed to find anyone playing polo with their Reverso today. Nonetheless, its idiosyncratic design combined with a timeless rectangular case has helped propel the Reverso into true cult classic status.

While its iconic appearance remains largely unchanged, the Reverso gains technicality brawn. Initially only available in time-only variants, the Reverso has added complications throughout the years: from to gyrotourbillons to minute repeaters to the ultimate Triptyque Grand Complication.

However, our favourite variant is the Reverso Tribute Duo. It has 2 different watch faces – a white front and blue on the flip side, allowing the user to swap aesthetics (or reference a different time) depending on situation. In addition, its clever timezone system allows for effortless time setting while maintaining the sleek lines of the case. We recommend you read the detailed review in the link.

The fit and finish is very well done. Overall, an extremely handsome and well-respected piece that accentuates style and elegance. The JLC Reverso Tribute Duo is priced at S$17,600.

The Rolex GMT-Master II with its popular ceramic “Pepsi” bezel.

Owning a Rolex is considered a sign of achievement to many. However for star-studded TV hosts, wearing a ‘timeless timepiece’ might be the finishing touch.

The GMT-Master was originally designed for pilots at the request of the Pan American airways in 1954. It featured a bi-coloured red and blue rotating bezel – hence coining its “Pepsi” nickname. Though once thought of as nothing more than a tool watch to read multiple time zones, the GMT-Master has turned into a culturally significant icon.

Launched in Baselworld 2018, the latest iteration GMT-Master II “Pepsi” has been widely-anticipated by collectors. The industry enjoyed a pleasant surprise when “the Crown” brought the iconic “Pepsi” bezel to the masses, albeit in a more affordable stainless steel model. It was previously available in white gold only. In addition to its bezel, the jubilee bracelet – another icon of Rolex – is a first for the entire ceramic series. The combination of both motifs has led the GMT “Pepsi” to being the talk of the town. ‘Greatest hits’ of the various generations of GMT-Masters, so to speak.

We reckon the GMT-Master II “Pepsi” to be a perfect choice for a casual or serious session – or just about any situation. And it’s perhaps – as cliché as it sounds – the most iconic watch here. The “Pepsi” retails for S$12,430.

For the interview session The Lange 1815 chronograph is the purest form of a chronograph from the German manufacturer.

If one is an avid reader of Deployant, then you may already know of our affection towards A. Lange & Sönhe: we often laud the German manufacturer’s beautiful finishing and attention to detail.

There are chronographs, and there are chronographs – Lange is the latter. Whilst most manufacturers opt for an outsourced movement, Lange doesn’t cut corners. The 1815 Chronograph features the same in-house column wheel base movement as its bigger brother. Though traditional in layout, it’s a spectacular sight to behold with impeccable finishing and quality. The dial offers excellent visual symmetry and readability: the subdials, for instance, are perfectly proportioned and sized. Perfect all round, to say the least. Same goes for the other motifs. Need we say more?

The watch is available in several dial/metal variants, but our pick here would be the black dial with white gold case: easy to colour-coordinate and perhaps a rather discreet piece. Not forgetting the flyback chronograph complication adds an extra layer of practicality. The 1815 Chronograph retails for €49,000. Perhaps the ultimate QP wristwatch from Patek: the ref. 5208.

When speaking of high-end chronographs, one mustn’t glance over Patek Philippe; the 179 years-old maison is in the top echelon of haute horlogerie manufacturers.

The perpetual calendar chronograph is the hallmark of Patek Philippe, whom was the first to introduce (and subsequently master) the execution of both coveted complications. Its ‘ultimate piece’ is perhaps the Ref. 5208: a true grand-complication. It is one of the most complicated pieces Patek has ever produced.

The ref. 5208 features a 42mm platinum case, making it the largest contemporary Patek Philippe ever made. And with a height of 15.11mm, not for the faint of wrist. The dial is aesthetically pleasing and well-balanced, using apertures to indicate day/date/month, etc. Simply put, perfect. It is powered by the manufacturer self-winding caliber R CH 27 PS QI. The movement comprises of 719 parts with minute repeater (2 gongs), full-fledged instantaneous QP, monopusher chronograph and moonphase. It beats at 21,600bph and, as far as haute horlogerie standards goes, finished to the utmost.

As far as horological grails goes, the ref. 5208 is the grail of grails. A statement piece, for those who know and appreciates. One of the most impressive watches in the world, and also one of the most expensive. The price is approximately $1 million, but it shouldn’t be a problem for our beloved TV personality. After all, the watch is said to be offered only to select customers. And the icing on the cake: Mr Thierry Stern – President of Patek Philippe – wears a ref. 5208. 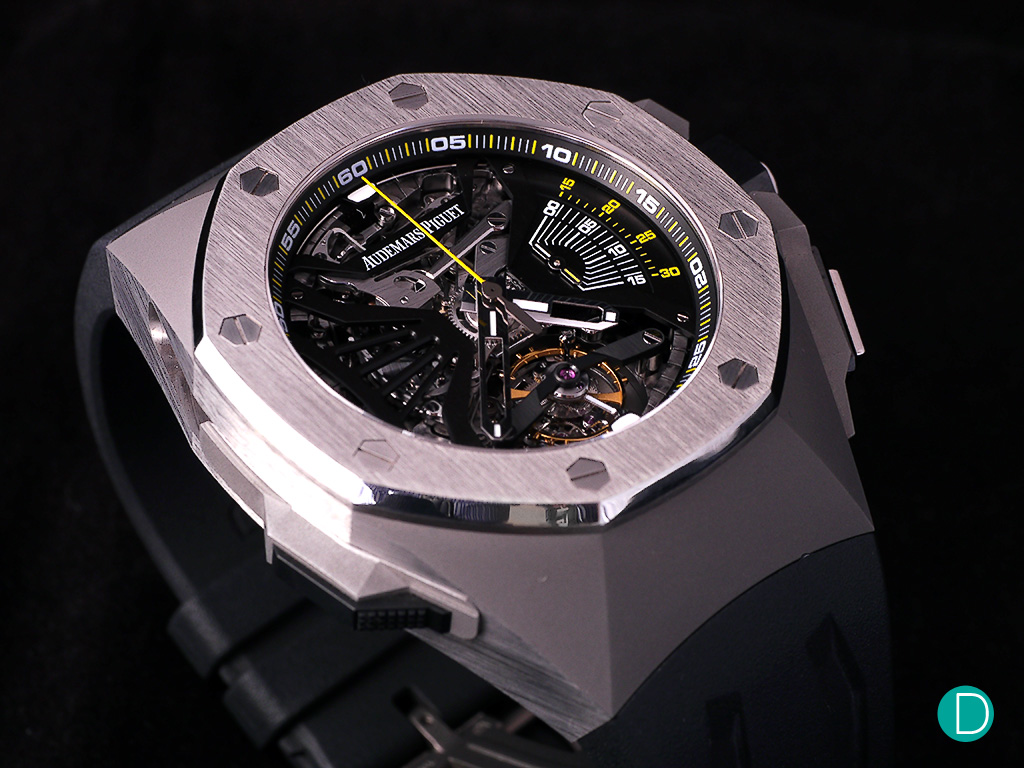 The AP Royal Oak Concept Supersonnerie has a avant-garde design will make a bold and distinct statement on the wrist.

Think of a luxury sports watch and chances are, you’ll think of Audemars Piguet. Granted, no surprise there as the Le Brassus manufacturer was the first to introduce such a kind with their Royal Oak in 1993.

The RO Concept Supersonnerie takes it up a notch with a highly contemporary case design and technical prowess. It features a tourbillon, a chronograph, and most notably, a very well-designed minute repeater. Interestingly, the minute repeater sounds were ‘developed’ in a Sound Lab program and based off the concept of a soundboard in a guitar. Also contrary to a normal repeater, the strike regulator was redesigned to remain silent. The end result is enriched harmonics that sounds loud, clear and clean with excellent quality. All is housed in a rather large 44 mm x 16.5 mm AP RO Concept case.

The AP RO Concept Supersonnerie is priced at S$780,000. Its avant-garde design will make a bold and distinct statement on the wrist. And not forgetting its impressive features list. Overall, we reckon this to be a perfect piece for high-profile social ‘gtgs’. The HYT H4 Alinghi stands out with its ingenious LED lighting system.

Perhaps the most innovative watch on this list is the HYT H4 Alinghi. The brand is well-known for their disruptive yet refreshing watchmaking techniques, using water to tell time. The H4 takes this a step further with a trick up its sleeves. Literally.

The H4’s highlight is its LED lighting which illuminates the timepiece in the dark. But instead of opting for batteries, the system is entirely mechanical powered. The 89 component system uses a miniature dynamo which generates the power to run both LED lights on the bezel. One full wind provides enough energy for 12 seconds of light. The watch is housed in a 51mm 3DTP™ carbon case.

The watch is very cool, and certainly a unique concept. Chances are, you probably won’t encounter another on any given day. We reckon this to be a piece that’ll get you noticed and make others go “wow” and “ooh”.

For this week’s Throwback Sunday, we have shared six different watches which we reckon suits television talk show hosts. Our choices tends to lean towards more classical pieces that have a significant spot as horological icons. By no means is this list exhaustive. There are several more iconic pieces in the sea of horology such as the Patek Philippe Ref. 5711 worn by Ellen.

To end, we frequently enjoy spotting notable pieces worn on-screen by our beloved showbiz personalities (hardcore wrist perverts much?). Hence, we’d be rather delighted if ever we see the aforementioned pieces, and will bring you coverage likewise.

We hope you’ve enjoyed this article. What are your thoughts on our selection? Is there a piece which you feel deserves a spot on our list? Let us know in the comments section below!