And now it remains for the Chief Editor to make his wishlist for Christmas. Does he want watches? After all, collecting for more years than he is able to count (his banker tells him its been 28 years since he started to spend every penny he makes on watches…for those of you who are into numbers), he is not really in the market for watches anymore? Or is he? What would be his Christmas prayer?

Perhaps watches. Perhaps not. But in the spirit of giving this Christmastide, I will start with a watch. It is, of course very difficult to choose one. Many beauties were announced this year, many incredibly wonderful watches. My Editor’s Choice is the obvious place to start. I wrote one for SIHH 2017, and two for Baselworld 2017 – with one specifically focusing on the Independents. But in reality, perhaps only one, or two innovations.

The most heavily promoted of the innovations is the Zenith El Primero Defy Lab.It won the Special Jury Prize at the recent GPHG, and it is not only a great advancement in watchmaking per se but also a technological tour de force. So intrigued was I, that we covered the watch several times. First in the reveal from Julien Tornare, then the photographs from the press release, then full coverage on our IG Live of the Asian launch event in Tokyo including an “open kimono” interview with Jean-Claude Biver, and then the hands on with live photographs.

Another interesting innovation is the highly technical Dominique Renaud piece. We received the technical information, but the details are overwhelming, and we have not yet had the time, and perhaps not even the technical depth and ability to understand the blade resonator. Perhaps more later, especially if we can get Dominique to explain to us in Geneva.

But I digress. Back to a watch I would wish for. I must say its a tough choice, for this veteran collector. After musing for a long time, I finally settled for this:

My choice is the Asaoka Chronograph. Announced in Baselworld 2017, and limited to only 3 pieces. The watch is totally hand made by Hajime Asaoka. He has made a name as the wonderkid in the AHCI, who is not only self taught, but makes all his watches in his little atelier in Tokyo. I visited him in his Tokyo lair recently, and made this report.

Totally amazing, that a self taught watchmaker can create complicated timepieces in such an amazing beauty is beyond my feeble imagination. Almost the entire watch is hand made by Asaoka. I understand he has recently taken in an assistant, but one who is already a master watchmaker, to help with some of the finishing work. But every watch that leaves the Tokyo atelier is still personally tuned, adjusted and worked on by Asaoka himself. 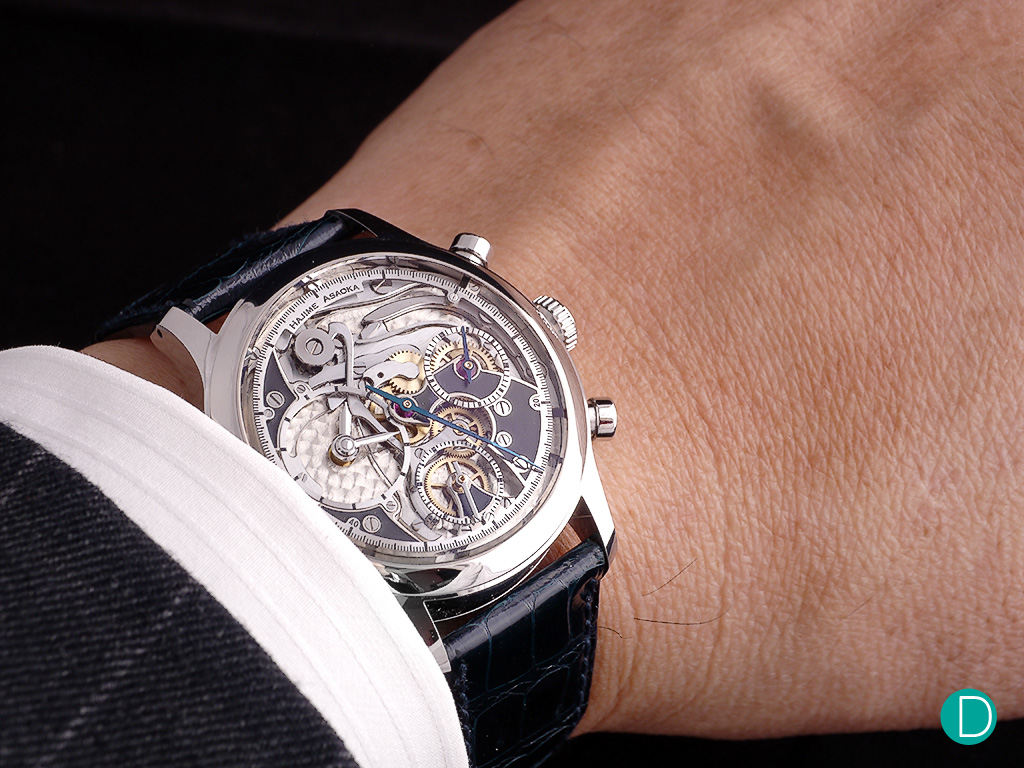 On the wrist the watch feels comfortable, and sits well. Despite being a prototype finished just before the show, the watch is stunning, and a masterful blend of aesthetics and technical showcase.

Finishing of the case, dial, hands and movement is exquisite. Comparable too the top levels of haute horlogerie.

The dial shows the chronograph-works in a peek-a-boo fashion. The entire mechanism is visible. And the chronograph function dials  take the pride of place. The hour and minute hands are relegated to a sub-dial at 9 o’clock. The case is 38mm diameter and 11mm high, and is also made by Hajime himself in his workshop in Tokyo.

And the back of the case shows a huge balance wheel, an Asaoka signature. A true achievement. The rear of the case is rather plain safe for the exceptional finish, and the bridge with its huge balance, measuring some 15mm in diameter.

The combination of the handwork, the incredible personality of Hajime Asaoka, as well as the amazing beauty and technical complexity of the watch captivates me, and is thus my choice.

More on this watch, including my own review is found here.

Peace on Earth, and good will to man

My second wish is not a watch, but a sincere wish for a more genial environment for the community.

“Glory to God in the highest, and on earth peace, good will toward men.”

The industry is in turmoil. Not only within the manufactures, but especially among the journalists and collectors. Strange behaviour. Jealousy, strive and the rearing of the big ego. I must admit, I am as guilty as the next collector, journalist, writer, blogger, photographer.

Perhaps this dark side is because the industry is driven by passion. Don’t get me wrong. Passion is good. And it is the thing which drives us. Daily. Constantly. But when the other side of the same passion coin rears its ugly head, it makes for unpleasantness all round. Friends stop talking to each other, some even refusing to acknowledge the other when meeting face to face. Former friends talking bad behind each other’s backs. There is a lack of collaboration. A poverty of camaraderie. We sulk, show displeasure, become angst. We should be having fun.

In some other circles, like among food bloggers for example, the environment is decidedly different. Though there is still jealousy and strive, but I feel this is perhaps to a lesser degree. Especially among the media, there is a spirit of friendliness. Writers/photographers go to for lunch and dinner together. Share places to eat. And if another publication makes a review of the same restaurant/stall/food, it is embraced as re-enforcing one’s own article. Even if the reviews offer disparate views. Cross posting is a way of life. All seen in the spirit of togetherness.

But perhaps it is time for us involved in horology to try and work towards a more cohesive, a more collaborative framework for the industry. A more friendly and genial environment. More smiles. More joy. More pleasantry. So my prayer this Christmas is for all participants to join together in a spirit of peace, and good will. And create a congenial environment. After all, for most of us, this is the very thing we desire when we embarked on this horological journey. And in the final analysis, its only about watches. Not life itself. Cheer up!

Peace. Shalom. Have a Blessed Christmas.