As the news of Dominique Renaud joining HYT reverberates through the industry, Deployant seizes the opportunity to do the first interview on the new partnership, and explores what is special about this announcement. Dominique Renaud, now out of retirement, and fully engaged for HYT to develop interesting new complications.

Some background. Dominique Renaud set up Renaud et Papi with Guilo Papi in 1986 and Renaud Papi Claret (now Manufacture Claret) in 1989. Dominique sold all his shares in Renaud et Papi in 2000 and more or less retired to the South of France. In 2013, he was still brimming with ideas on horology and started to itch to return to watchmaking. He re-established a company called Swiss Innovation Lab with a partner and began to put into projects some of the ideas he had in his 13 years of retirement.

The technology utilized in HYT watches, are derived from aerospace and medical fields, but HYT now have in-house know how and are able to manufacture these fluid systems in-house. This is the capillary tube used in the H1 and H2 as the hour marker. In this example, the green fluid (as a matter of fact, the colour options are unlimited, as these can take on dye) is water based, and the transparent side on the photograph left is oil based. Oil and water will never mix, and the meniscus forms the basis for the time to be read. The two pistons act as reservoirs for each immixable fluid, and also as a pump to move the meniscus.

Considered by many to be a genius in watchmaking (together with his former partner Gulio Papi who is also considered an icon in modern watchmaking), it was a considerable coup for HYT, a small startup company with big innovative ideas and huge plans for disruptive technology to have him join the team. The H1: a collaboration with Jean-François Mojon of Chronode.
This particular piece is known as the Iceberg, for the white dial on a titanium case, and a ice cold blue liquid.

Vincent Perriard, CEO of HYT tells me that working with Dominique Renaud was an old dream of his. “I had the chance to work with him almost 20 years ago when I was in charge of Audemars Piguet international marketing. So when Patrick Berdoz, Chairman of HYT,  who was in touch with him in late 2013 called me and asked me: “Hey Vincent, do you know Dominique Renaud? Because he wants to get back to business and he has a lot of great ideas; are you up for a meeting?”, he said… I said, “Are you kidding me!!?? Of course I want!!”. The rest as they say is history. The H2, is a collaboration with Audemars Piguet Renaud Papi (APRP), and features the piston arranged in a V shape, like a V engine, and and opened up dial to show more of the movement.

So what will Dominique do in HYT? Well as a start, he will lead a 5 people team, all watchmakers. The first watchmaker (after Dominique) has been hired and started on October 1. This is the beginning of a new phase for HYT with the integration of Assembly, After Sales Service and soon Movement manufacture.

The H1 takes on many forms. This one with a luminous resin case, and green fluid.

Dominique, on the other hand told Deployant, “To tell the truth, I did not go into “retirement”, but I simply had a break to take things into perspective and to move forward on different projects I had. I have always knew I will return!”. 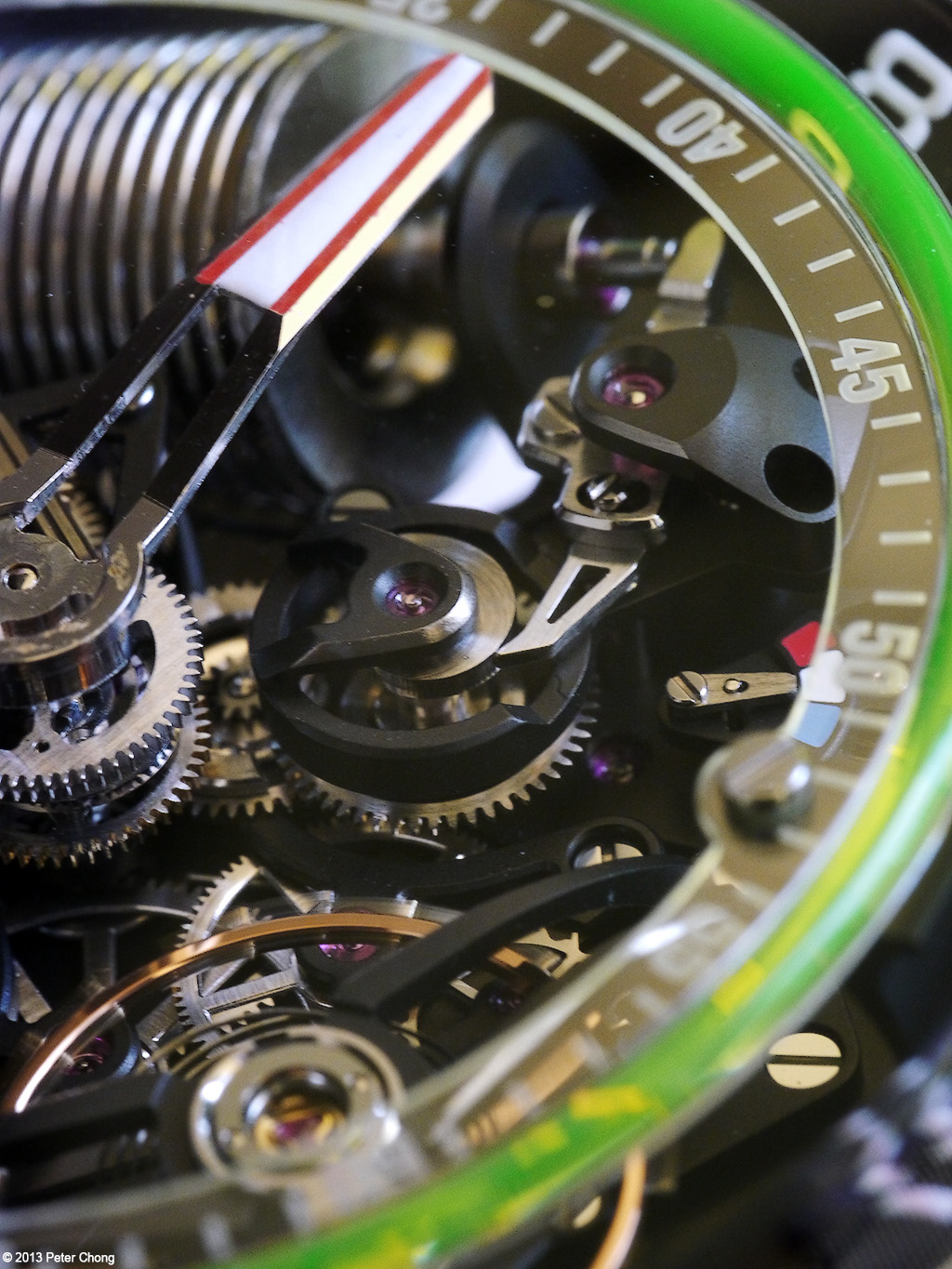 The H2 as well as the H1’s mechanical parts are designed, and finished to traditional watchmaking standards.

We queried him on what he sees as values he shared with HYT, considering that he was a old school mechanical genius, and HYT is a young, upstart disruptive watchmaker specializing in liquid technology. Traditional watchmaking finishing and layout of the H1 movement. The movement is finished very well, with beautiful anglage and nice sharp inflexions on the bridges.

He replied, “My values are very similar to the HYT team ones. We are here to develop groundbreaking innovations, with a dynamic team spirit. This team has a fantastic and cutting-edge know-how. HYT will take advantage of my expertise in the mechanics of watchmaking and I will benefit from its communication and marketing strenghts. The H1 in titanium case with black DLC finish, and red liquid, also known as Dracula…as the black is reminsicent of the dark and the red of the blood. Shown here with the bright orange paint from iconic Italian bicycle manufacturer Pinarello’s Dogma 65.1 Hydro.

“My immediate plans for HYT are :

– to lead the introduction of watchmakers integration within the company,

– to go beyond by creating a movement 20 times more powerful than the actual one. It will allow us to inculde Great Fluidic Complications inside HYT watches.” The H1, in rose gold, and green fluid. A more classic interpretation, perhaps. The watches are rather large, the H1 as well as the H2 is 48.8mm in diameter, sitting rather high on the wrist. The watch is surprisingly comfortable for its size, but one will need to have shirt cuffs enlarged for the watches to fit under.

Interesting indeed. When pushed on specifics, Vincent has this to say, “That’s top secret. What I can confirm is that we will develop very soon fluidic complications and that a watch will not only display hours with the liquid but many other things. We are building a new movement – as we speak – that will develop up to 20x more energy than any other movement in the industry. This will enable us to add complications and multiply fluid pistons. And soon, we will have liquid to improve the watch itself… not only to display time…”

And Dominique offered a bit more, if albeit not exactly clear…”You can expect a unique escapement that will neither disrupt the balance spring amplitude nor the proper functioning of the watch.” Vincent Perriard, CEO of HYT. Vincent wears the H1 and holds the H2. Both in titanium with black DLC coating.

So how will this new relationship affect the existing one with APRP? To which Vincent replied, with a characteristic grin and a glint in his eye, “Things will evolve, yes. But on a mid term basis, we have signed with APRP to develop the H3, and will continue our excellent working relationship with APRP. Working with both Guilio and Dominique is a dream come true! Who else can claim the same?” Who else indeed.