Hajime Asaoka captures the imagination of the independent watchmaking enthusiast almost with a surreal magnetic charm. Here is a Japanese gentleman, who hardly speak any English, obviously highly idiosyncratic in his outlook. A self taught watchmaker, who willed himself the knowledge to make watches by hand by reading the landmark book by George Daniels – Watchmaking and by watching YouTube videos. Intriguing does not begin to describe the man. Here we visited his lair just a few minutes from the bustling Harajuku in the Shibuya area in Tokyo, and get to see perhaps more than a glimpse at the personality behind the beautiful watches.

Its not a secret that we love Asaoka’s watches. We have covered them in detailed analytical write-ups several times. His watches never fail to impress, and carry the DNA which is a reflection of his character. For reviews of the Asaoka watches click here for our introductory article with the T, and here for Project Tsunami, and here for his latest creation, the Chronograph. So when the chance came to visit his atelier, we jumped at it. Tucked in a residential building in an up market residential area just a few minutes from the bustling Harajuku area in Tokyo, the atelier occupies a ground floor unit.

In a small room by the side is the machine room. This is a really small room. the photograph below is shot on a medium format digital camera (Hasselblad H3D-39) with a sensor size double that of a full frame DSLR on a 28mm lens (equivalent to roughly 21mm on a full frame DSLR).

In this room are the machines used for turning, including the lathe, drills and a CNC machine for making parts and tools. Yes, Hajime even makes his own tools.

The Turning Room, with machines. Hajime Asaoka welcomes us by his CNC machine with the signature wry smile.

He has his own CNC machine to make the bridges and movement plates. The CNC machine sits in one corner.

He proceeds to show us how he makes a tool to hold the movement. The cutting lathe. This is the exact same model and make of a precision lathe used by the late George Daniels. Hajime bought this machine based on the recommendation by George Daniels in his book Watchmaking, as seen on plate XII in the book.
In this photograph, he is cutting a tool to hold a movement part. Hajime examines the plate after it is cut with the precision lathe.

The balance wheel is also made in-house by Hajime. He chooses to use stainless steel as a material for the balance, a material also used by Daniels. He explains that the combination of the stainless steel balance with the Nivarox balance spring (no, he does not make this, but buys them), there is a kind of symbiotic relationship. In this photograph, he is drilling the balance wheel. 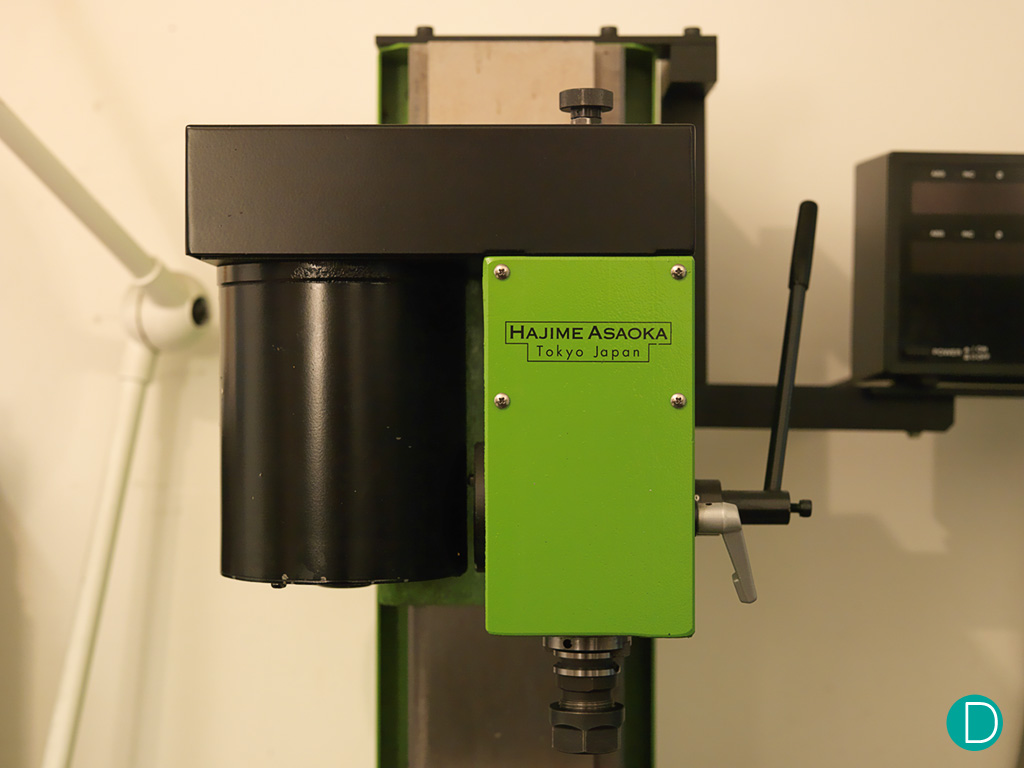 The precision drill, with his name proudly embossed.

We then moved into the main room. As one enters, one is greeted with this view. This is the study/office, where he works. Note the original Apple Mac, still in working condition.
Not visible on the photograph, and on the ceiling is a Sony VPH 1270 3 CRT video projector, and a large screen to the right of the photograph. Hajime is a big movie buff, and uses the system to watch movies.

To the right a bar, and the repository of video material just out of sight below the counter. Printing the dial. And other secrets.

In the center of the room is a “dining” table, where he does much of his work. He proceeds to show us how he prints the dials. Allow us to preface this by the fact that dial making, and printing is a very special skill, and almost all dials are made by dial specialists. Almost all watchmakers buy their dials as the skills required are of a very high order of magnitude, despite it looking like a simple process. One only needs to look at dials of fake watches, to see that this is an extremely difficult process to do, and often the Achilles Heel to spot them.

Hajime has mastered this art as evidenced by the dials that adorn his own watches. But he is also a much sought after artisan to make dials for other high end independent watchmakers. We saw several other dials with other names on them during our visit, but are not able to reveal more. The mould used to make the gelatin cone used for transfer printing the dials.

Hajime explains that the usual method is to use a ready made silicon cone. He finds this to be acceptable for single colour dial prints, but when the design calls for more than one colour to be printed, he prefers to make his own cone. He uses gelatin instead of silicon for this. The positive metal mould in the photograph is used to make the negative mould in which he pours gelatin to make the cone. Metal plates engraved by acid etching is used as a master. He then coats the metal plate with Japanese lacquer. He then cleans the plate with tissue paper and alcohol, leaving the lacquer filling the engraved spaces.

He begins with  a metal plate with the graphic to be printed as shown above. The plate is precision mounted on a sliding table to one side, and the dial to be printed on the other side of the table.

The plate is the master for the pattern and is prepared by a supplier by acid etching on stainless steel. Hajime then applies a small amount of hand mixed Japanese lacquer on the plate, wipes it with a squeegee over the pattern, and then removes the excess. The lacquer is now only in the recessed spaces made by the etching. This lacquer is picked up by the silicon/gelatin cone, and transferred to the dial by sliding the table back and forth. Great precision necessary to ensure perfect alignment of each layer of print which is laid one over the other. No smudging, or smearing, or bleeding. The lacquer is picked up by the cone, which is pressed on the plate. And transferred to the dial, and makes a perfect impression.

Hajime prefers to do the multiple layers in rapid sucession. Though the machine is ultra-precise, the method used is quite artisanal in nature. Depending on the weather conditions (humidity and temperature), the mixture of lacquer and alcohol to determine the viscousity is made by only using his own judgement. Totally by feel, and no measurements are taken. A total of 5 layers of lacquer are laid over each other for each design to be printed. As each layer of lacquer is laid over another, he examines the dial to ensure that is is absolutely precise. A sample print, with two layers of lacquer. Note the precision of the lacquer being laid over each other. No smudging of any kind. On examination of this sample print, Hajime declares this below standard, and not acceptable, although to our untrained eyes, the print looks perfect. One of the production dials which passed his critical eye, ready for mounting on a watch. Note that in addition to the printing on the dial, he makes the entire dial himself, including the appliqués and the other markings.

The other fascination of Hajime is cameras. Japanese cameras in particular. In the atelier, we saw numerous cameras, most film, but also digital. He takes his own photographs, and for this uses a Minolta A mount digital camera. Minolta was bought by Sony, and the very same camera, with the Sony logo was sold as the A7 when it was introduced in 2013. One of the camera set ups he uses. A macro bellows is used to get up to 5X magnification from the Rodenstock enlarger lens. The bellows also allow for tilt and shift to improve field of focus. The set-up is mounted on an enormous studio Manfrotto tripod and head.

Hajime revealed that he is probably more enthusiastic with cameras and photography than he is with watches. And though he would never attempt to make his own cameras, he would be able to repair the mechanical bodies of older film cameras. Many of which are in his collection. We discussed cameras for a while, while playing with the gear. His excitement was palpable as he drew one camera or lens out from his stash to show. Most were film cameras. And almost all mechanical. And all Japanese. For some reason, Leica, which I thought whose philosophy would align with his, especially when it comes the pursuit of the ultimate, does not attract his interest. Not even the legendary film cameras like the M3 or the M6. Perhaps as a Japanese, his loyalty is to Japan made products. Also evident in his choice of the Sony VPH 1270 projector over say a Barco. Nippon Kogaku Nikkor Ultra Micro 125mm f/2.8. Originally designed for process inspection of integrated circuits. This is a no holds barred lens capable of resolving 400 lp/mm. Magnification is 1/25X. Made in circa 1965 it still commands a good sum of money to buy one today. Hajime had this modified to the Minolta/Sony A Mount.

With that, we ended our visit…friends will know we went on to an awesome omakase sushi dinner in Okie Sushi nearby at Aoyama-Icchome. But that’s another tale for another forum. Taken outside the atelier, Hajime exudes confidence, but a certain taciturn image of a brooding genius. When asked what animal he sees himself as, his reply was swift. A dog. Because the dog’s loyalty is so pure, it demands his respect. Note that just a short distance away in the famous Shibuya Crossing is the statue of Hachiko, the loyal dog as a prime example of this trait Hajime so admires.