Two decades ago, a legend was born. And that watch elevated German watchmaking into a whole new platform. To celebrate the birthday of the legend, the Lange 1, A. Lange & Sohne has released a special watch set to commemorate this wonderful occasion in this year’s Watches and Wonders. This is one of the five different variants of the Lange 1 “20th anniversary” set; it comes with a white gold case and a blue guilloched gold dial. Note also the date digits are in blue on a white background. All other Langes feature black numerals on a white background and the platinum version with a blue dial feature white numerals on a blue dial.

To be brutally honest, it is difficult to comprehend that the Lange 1 is already twenty years old. The design is rather timeless, and iconic. It seems as though the watch itself is able to adapt and has managed to stay relevant for the past two decades. That is absolutely impressive, considering the fact that not many watches are able to enjoy such a stature. This set of Lange 1 comes with a pink gold case, and a black guilloched gold dial.

For this Lange 1 “20th Anniversary” watch set, it comes in five different variations. All of them comes with a case made with precious metal (either in rose gold, white gold, or platinum), and a guilloched dial in gold. Each set comes with two watches, a Lange 1 and a Little Lange 1. The Lange 1 is 38.5mm, while the Little Lange 1 is sized at 36.1mm. For the latter, it also comes with a diamond bezel which features 64 brilliant-cut diamonds. The different variations of the 20th Anniversary Lange 1. Missing in this photograph is the platinum case version with a black guilloched gold dial.

Intriguingly, both the Lange 1 and the Little Lange 1 uses the Calibre L901.0, a manual winding movement which features a 72 hour power reserve. Other complications includes the usual outsized date indicator, and the power reserve indicator. An interesting thing to note is that this movement is made in 1990, and it is still being used in the Lange 1 watches today. That is truly incredible. The Calibre L901.0 movement, used on the Lange 1. As is typical of Lange watches, the movement finish is exemplary. The anglage is beautifully made, even, brilliantly polished. The gold chatons set with blued steel screws hold the jewels, and the hand engraved balance cock are magnificent examples of the level of finish lavished on the movements. The characteristic three quarter plate movement in German Silver with the warm glow will patina over the years to become even more beautiful.

In our humble opinion, we think A. Lange & Sohne did another excellent job this time round. We like how they have made it into a “couple watch”, which allows a couple to enjoy their own exquisite Lange timepiece. Also, they did a great job in making the Lange 1 into a nice ladies timepiece, without compromising much of its original DNA. Some watchmakers like to overdo things, by making the watch too “bling” to woo their female clientele. This Little Lange 1 is just nice, it is exudes elegance and luxury without being too gaudy. That is what makes A. Lange & Sohne watches special. It is a very special timepiece, and yet it is subtle at the same time. The balance cock of the Lange 1 series is hand engraved as usual, but also note at the edge of the cock, is the letter 20, indicating the edition size of the watch in each case metal/dial combination.

There were also other pieces that A. Lange & Sohne have launched during this year’s Watches and Wonders. The A. Lange & Sohne Langematik Perpetual, in white gold.

The first one would be the A. Lange & Sohne Langematik Perpetual, in white gold. This is the first time A. Lange & Sohne has used the white gold on the Langematik Perpetual, and the result is profounding. This is probably due to the combination of having the black dial, which accentuates the details on the dial itself. The watch is henceforth much more legible. The dial also has a 3d look with the applied numerals and the dial itself is actually contoured to feature sunken subdials. We think that this piece is actually much more beautiful than its predecessors. 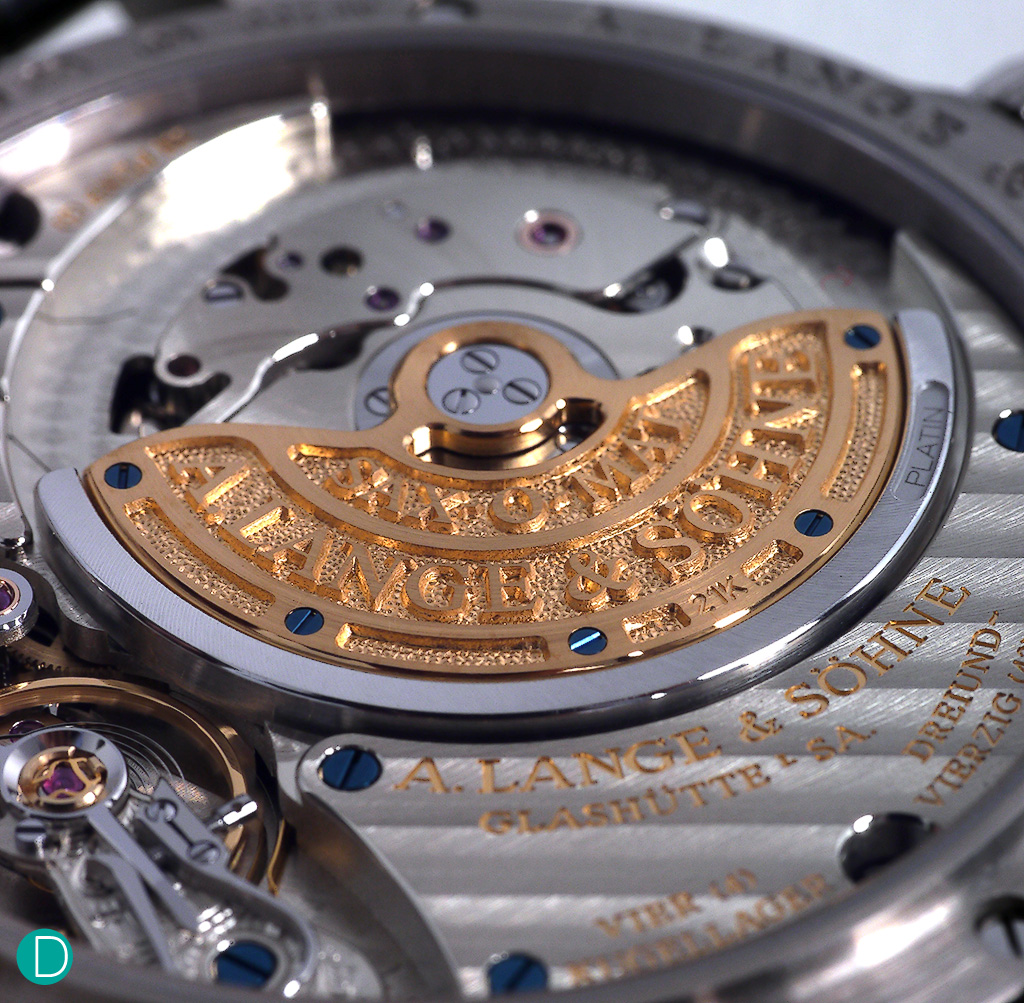 The Langematik Perpetual uses the same Calibre L922.1 movements, just like its predecessors. The gold rotor, with a platinum edge is a standard to judge all other micro-rotor watches, and is a joy to the eyes.

Other than aesthetics, the new Langematik Perpetual is very much the same as its counterparts in other precious metals. They all used the same Calibre L922.1, which features an outsized date, a perpetual calendar, the patented zero-reset function, and the day/ night indicator. Finally, we have the Richard Lange Tourbillon “Pour le Mérite”. The “Pour le Mérite” collection is another interesting piece of story in the history of A. Lange & Sohne, and it features the famed fusée-and-chain transmission which allows the watch to have constant power when it is in operation. First introduced in SIHH 2011. We covered the launch in detail here. It was then available in platinum and rose gold, but in Hong Kong 2014, the white gold version was announced.

One interesting thing to note would be the small auxiliary dial that will pop up and fills up the gap on the portion of the hour dial that intersects the seconds dials (i.e. the missing portion of the hour dial). The gap will be filled when the watch is between 6 to 12 o’clock; it will be opened (as shown in the picture) during other timing (i.e. between 12 to 6 o’clock). The feature is rather interesting, as it allows us to read the timing more easily (when it is between 6 to 12 o’clock), while allowing us to view the intricate tourbillon when that other portion of the dial is rendered redundant. The attention to detail there is amazing. The Calibre L072.1 that is featured on the Richard Lange Tourbillon “Pour le Mérite”.

The Richard Lange Tourbillon “Pour le Mérite” uses the Calibre L072.1 movement, which features a tourbillon and a patented stop-second mechanism. Lange priemered the stop second tourbillon in the Cabaret Tourbillon in 2007. This variant comes with a 41.9mm white gold casing, complimented by an argenté-coloured solid-silver dial. This special timepiece is only available in A. Lange & Sohne boutiques. But yes, we reckon that making an effort to go down to the boutique is a small price to pay to own such a lovely timepiece.

These were the marvels which were introduced in the Watches and Wonders 2014 event in Hong Kong. We await as we get clearance to release information on the new timepiece which will be announced in Dresden on the actual anniversary date on October 24. Deployant will attend the event, and will report live on our Instagram and Facebook pages, and will carry a detailed report and analysis of the new watch with live pictures soon after the event.