In the Chinese culture, red packets – or angpows – are usually given by the senior members of the family during the Lunar New Year. The recipients to these red packets are usually the children, or the unmarried members within the family. There are many significances behind the gesture, although it is often associated with blessings and good fortune. They usually contain a tidy sum of money, although the numbers usually vary between each person.

There are several things that we will do with the angpow money after the Lunar New Year. One of the more popular options is to save up the money, which can work out to between a few hundred dollars, up to a few thousand dollars. This is especially true in the Asian culture, where there is pretty much a high propensity to save.

The other option is to spend a portion of the money buying things that we like. Or save a few years’ worth and go out to buy a watch. Especially for hard core watch collectors like us. But what are some of the choices that are available? Let’s find out! The Sistem Fly is one of the six pieces from the Sistem51 Irony collection.

The first watch that we have today is the Swatch Sistem51 – a watch that is fun, and yet combines with an interesting horological story behind it.

Swatch, as some might know, is a portmanteau of “second watch”. It is meant to be a fun and casual timepiece for the weekends, after a supposedly tiring week where one is constantly dressed up and spending most of his or her waking hours doing work. However, Swatch watches in the past do not appeal to many collectors, simply because they are mostly available with a Quartz movement. But it all changed when Swatch launched the Sistem51. This is a revolutionary watch, in which the movements are completely manufactured by machines, and it requires only one screw to hold all the components. Additionally, it has a respectable power reserve of around 90 hours as well.

The prices for the new Sistem51 Irony collection begin at S$279, and there are multiple designs for the collectors to choose from. It is certainly an interesting piece to add into one’s collection, especially if one is looking for an fun and inexpensive piece to wear on a long weekend. A simple and affordable timepiece for the masses: the G-Shock GA-700.

The Casio G-Shock is an iconic watch, and one that is often synonymous with quality and robustness. The latest addition to the line-up, GA-700, certainly embodies the values of G-Shock rather brilliantly.

The GA-700 combines both digital and analogue display, featuring a multitude of functions. It includes a stop-watch, world-time display, an alarm – to name a few. The watch comes with a rather tough look as well, which includes a rugged bezel, as well as tough button guards to the bold buttons around the case. It certainly has the G-Shock DNA, and its large array of  functionality is a plus-point as well.

Priced at S$169, we feel that the G-Shock GA-700 is an extremely reasonably priced timepiece. It is robust, and its features are definitely useful. This is certainly a good purchase for someone who likes adventures and wants to have a timepiece that is capable of withstanding any tough conditions that is being thrown at it.

SEVENFRIDAY is probably a brand that is no stranger to many collectors. Launched in 2012, the watch manufacturer had captured the attention of collectors with well-priced and non-conformist timepieces. The V-series, which was the third collection from the brand, perhaps encapsulates the values of SEVENFRIDAY nicely. The watch features a unique disruptive dial layout, and an angular case design that is unlike any others that we have seen. The other nice functions of the V-series include a quick strap change mechanism, and a NFC chip that is embedded on the caseback. The latter allows the watch to be authenticated, and SEVENFRIDAY had mentioned that they will roll out more features within the application in time to come as well.

The V-series is powered by Miyota’s self-winding 82S7, boasting a power reserve of around 40 hours. The recommended retail price of the watch is S$1,778, and we reckon it is an excellent choice for someone who wants a conversational and bold timepiece. A pair of NOMOS Tangente.

NOMOS is a brand that many of us have waxed lyrical over the last few years, and there are a few good reasons for that. We particularly like the brand for two things – its simple and minimalist design, as well as its attractive price proposition. The Tangente is one good example. We like the simple dial layout, complemented with a thin bezel and thin lugs. It is also fitted with a nicely-finished in-house movement, which it is available in both automatic and manual-winding variant.

The manual-winding model of the Tangente 38 is our top pick from the collection. We particularly like its simplicity, and value-proposition that this watch provides. The fact that it is a manual-winding watch is a plus-point for us as well, as it exudes an “old-school charm” that makes the timepiece rather attractive. The 38mm watch retails at S$2,610, and we reckon that this watch offers tremendous value for a well-made timepiece that is fitted with an excellent in-house produced movement.

Next, we have a timepiece that has an intriguing and rich history: the Omega Speedmaster Professional, otherwise affectionately known as the “Moonwatch”.

The Speedmaster was launched in 1957, as a manual-winding chronograph that was initially meant for either sports or racing. Its association with the outer-space was only established a few years later, when NASA selected the Speedmaster for both its Gemini and Apollo mission. Its position was further cemented in 21 July 1969, when Buzz Aldrin wore his Speedmaster when he exited the spacecraft and took his first step on the moon.

Over the years, the “Moonwatch” have undergone several changes, most notably in terms of its movement and bracelet design. However, the main essence of the timepiece remains. In terms of its aesthetics, it still looks similar to its predecessors, sans some subtle cosmetic changes. The latest reiteration, with the Calibre 1861 movement, retails at S$6,850. The watch is very well-priced in our opinion, and we think that this is one of the quintessential pieces in any serious watch collection. 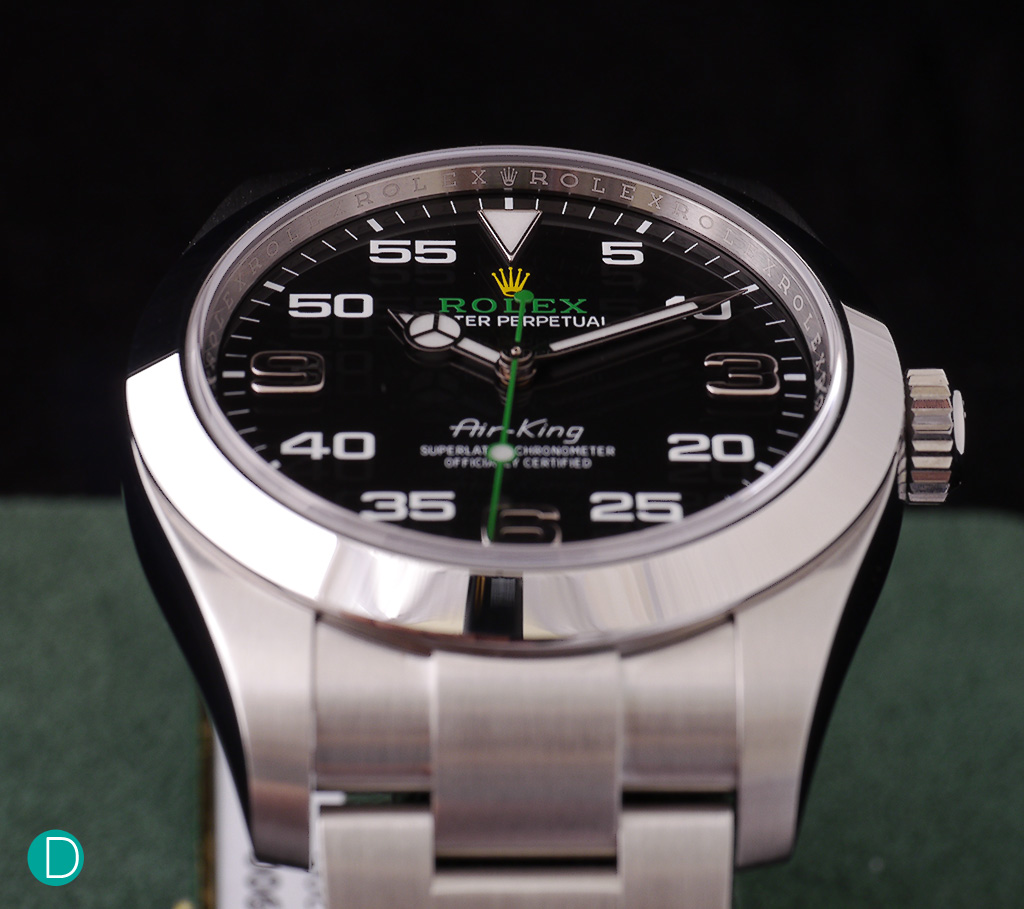 The new Rolex Air-King, featuring a design that is much more casual and less serious than its usual offerings.

Finally, we round up the article with a relatively underrated piece from Rolex: the Air King.

The new Air King was relaunched in Baselworld 2016, and it was a breath of fresh air as compared to the current offerings. It is contemporary, and the design is rather different from the usual Rolex watches that we are used to. For instance, the dial layout – which comprises of a combination of minute and hour numerals – is refreshing. The use of bright yellow and green colours for the coronet and brand lettering on the dial is intriguing as well, considering the impact that it provides despite constituting just a small portion of the dial.

Powered by the in-house Calibre 3131, the Air King boasts a self-winding movement with a decent power reserve of around 48 hours. In addition, as with all current Rolex watches, it is Superlative Chronometer Certified. This means that the watches underwent a stricter set of testing, and ultimately having an accuracy of +/- 2 seconds.

The Rolex Air King is priced at S$8,340, and it is certainly a good way to get started in the Rolex journey (if you have yet to buy one).

In this week’s article, we have tried to keep our selections on the lower end of the price spectrum. Granted, the last two watches on the list are on the higher side, but we reckon that those are probably watches that some of the readers will be interested in, and reachable if one saves up a few years’ worth of angpows. The Speedmaster and Air King are good additions for new collectors who wants to start building a serious collection. This is also probably a good time to start collecting, with the additional coffers in the war chest.