The Omega Speedmaster is considered by many as one of the most iconic watches in the world of horology. It has captured the hearts of many collectors, including harsh critics. In this mini-series, we will be exploring several Speedmaster watches that Omega have manufactured over the years, including some examples that are rarely seen. 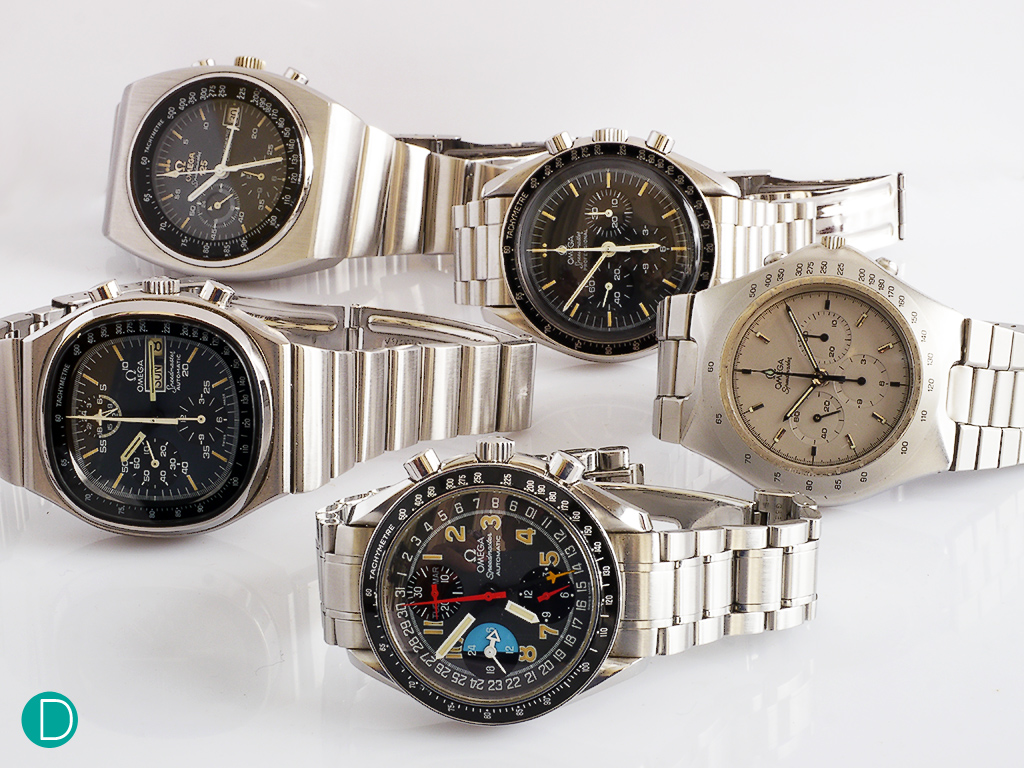 These are the Speedmasters that we are featuring today. A throwback to the good ol’ days.

The folks at Deployant are great fans of the Speedmaster. We love how the watch looks; it is still so timeless even after more than half a decade since its inception. Over the years, Omega had expanded its Speedmaster range, spawning some classics like the Mark II and the Mark 40. We are very privileged to gain access to several of these pieces, and we would like to thank the distinguished gentleman owner for making this happen. So now, just sit back, relax, and enjoy the first part of this mini-series on one of the most ubiquitous chronographs in the world of horology.

The History of Speedmaster

The Omega Speedmaster, also affectionately known as the Speedy, is a chronograph manufactured by Omega in 1957. The Speedy shot to stardom when it was the first watch to be certified “flight qualified by NASA for all manned space missions”. In 1969, the Speedmaster Professional became the first watch to be worn on the moon (hence, the moniker “Moonwatch”). Since then on, it had went to the moon several times, including the Apollo 13 mission in which the Speedmaster’s chronograph function had managed to accurately measure the time required for the Space Shuttle to carry out its Mid-Course Correction.

The iconic Omega Speedmaster Professional. This is the earlier model using the tritium lume, and it has developed a nice patina overtime.

The Speedmaster Professional, aka “Moonwatch” is perhaps the most well-known model in the entire Speedmaster collection. Yes, this is the same model that went onto the moon, albeit this is a later variant (ref. 145.022). This example uses the Caliber 861, an upgrade from the original Caliber 321. Caliber 861 was subsequently succeeded by Caliber 1861, and then the Caliber 1863 (which is decorated as it is meant for models with open casebacks). “The First Watch Worn On The Moon”

On the caseback of the “Moonwatch” features, in our opinion, one of the most important lines in the history of horology. The title “The First Watch Worn On The Moon” is not just a bragging right; it is a testament to the quality and achievements of both Omega and Lemania. It was the only watch that had passed a series of stringent tests that were carried out by NASA, defeating competitors such as Rolex and Longines-Wittnauer. One of our favorite Speedies in the entire collection. There are not many pieces that still looks so timeless, even after so many years.

The “Moonwatch” is perhaps one of our favourite Speedies in the entire collection. It is not just the fact that it is affordable. The “Moonwatch” is a timeless classic, with a great provenance accompanying it. On top of that, the “Moonwatch” has played an significant role in the history of the mankind. To be honest, there are not many watches out there that are able to boast such credentials. If you are looking to get a chronograph for yourself, look no further. Even the Watch Snob approves of it. One of the more colourful variants of the Speedy family- the MK40.

The MK40 (ref. 3520.53.00) is definitely one of the more colorful and striking pieces from the Speedmaster collection. It features striking red hands, blue (albeit partially) subdial, a date hand with a yellow plane motif, as well as patina-ed numerals. Also known as the Speedmaster Day-Date, this watch uses the Caliber 1151, which is based on the Valjoux 7751.

Despite its small size at 39mm, the MK40 is actually capable of many functions. It includes a Day-Date (and Month) function, a chronograph, a 24-hour indicator, as well as usually time-telling capabilities. The movement that powers the MK40 is actually a Valjoux 7751-based Caliber 1151, which features a power reserve of 44 hours. Another interesting feature of the MK40- the extended bracelet.

While the MK40 is a really cool-looking watch, our qualm would be the fact that there are too many things going on on the dial itself. This makes the watch a little less legible, and it seems to be the same with many other Speedmaster variants. Nevertheless, this is still a really good looking watch, and it is one that we wouldn’t mind having in our collection. The Omega Speedmaster 125. It is a very solid watch, literally and metaphorically.

Up next, we have the Omega Speedmaster 125 (ref. ST378.0801). Among the several pieces that we are featuring today, the Speedy 125 is a little special- the movement is actually chronometer certified.

The Speedy 125 was produced to commemorate Omega’s 125th Anniversary, and only 2000 examples of these are made. They are, however, not individually numbered though. Only 2000 examples of the Speedy 125 were made, which makes it a very rare prospect in today’s market.

The Speedy 125 runs on Omega’s Caliber 1041, and it is based on a Lemania 1341 movement. Functions include a date indicator, a tachymeter, a 24-hour indicator, and a chronograph.

Because of the amount of hands and subdials on the dial, it may seem a little confusing to understand how this watch works. Fret not, the folks at Deployant will help to decipher the watch! A simple caseback, with the Speedmaster emblem.

We love the Speedy 125 for its robustness, as well as its uniqueness. This epitomizes many Omega watches in the 70s: they are big, brash, and unorthodox. This is the period where watchmakers are transiting from small dress watches to gigantic and functional pieces. It looks so different from many other watches, including those that are in today’s market.  This is truly something special. This is either a love it or hate it watch, but everyone can admit that this is an extremely well-made timepiece.

Well, this is a controversial timepiece, but this is certainly one of the timepiece that I would personally love to own. It looks and feels solid, it is well-manufactured, it is unique, it is a classic, and it is rare. What else can you ask for? The Speemaster Teutonic, aka “German Version”. This is a little of an oddball; the deviant brother in the Speedmaster collection.

Admittedly, the Speedmaster Teutonic (ref. 145.0040), also known as the “German Version”, is a little different from what we are expecting when we first laid our eyes on it. The case is just so different, so unlike a Speedmaster. Perhaps it is embedded deep into our mind that a Speedmaster is a solid and reliable tool watch, and the Teutonic just does not fit into the pre-existing mindset that we had. Of course, we are not saying that the Teutonic is not a good watch. But let’s put it simply, it seems more like a cool watch than a serious tool watch. The bracelet of the Speedy Teutonic. Admittedly, it looks like an alien’s scale from a Sci-Fi film.

The Speedy Teutonic runs on the Caliber 861, similar to the “Moonwatch” that we have featured just now. Personally, we feel that a Speedy should be a manual-winding watch, so that it stays true to its original heritage. At least the Speedy Teutonic fits the bill here. A Speedy that is unlike others. But yes, this is another controversial piece nevertheless.

There is so much to like about the Teutonic, but yet at the same time it just feels and looks so wrong. The combination of the blue hands and indices, together with the silver dial, makes it a rather lethal combination. The texture of the case and bracelet feels rather good too. But then, the deal breaker was the shape of the case. We felt that this, as mentioned, doesn’t look like a Speedmaster. It is just so queer, so different. Perhaps we do not know how to appreciate this. But we would certainly love to see the same blue hands/ indices and silver dial combination on a proper Speedy once again. This is known as the “TV Screen”, thanks to the shape of the case.

Finally, we end off this episode of the mini-series with the Omega Speedmaster 1045 TV Screen (ref. 176.0014). This is another rather cool-looking Speedy, and it is one of the favorites between the folks at Deployant.

We actually quite like the TV Screen, as it is unorthodox and yet not too bizarre. There is a difference between being creative and being weird, and Omega this time have found the right equilibrium to the formula. But alas, the dial is too cluttered once again. At 40mm, this watch is actually pretty comfortable on the wrist.

The Speedy TV Screen is operated by Omega’s Caliber 1045, which is based on Lemania’s 5100. Like the Speedy 125, it has a 24-hour indicator, a chronograph (in which the hands functions the same way as the 125), a day-date indicator, and of course the usual timing indicators. The integrated bracelets on the Speedy “TV Dial”. Seems like this is a regular feature on many Speedy watches from that era.

One feature that sets this Speedy apart from the others that we have featured today would be the dial. We are suckers for blue dials, and the dark blue sunburst dial on the dial melts our heart. It is delicate and unassuming, and it looks so exquisite under natural light. We are very much in love! Spotted something different on the caseback?

Another unusual feature would be the caseback. Instead of having a Speedmaster signed caseback, they fitted a Seamaster caseback onto the Speedy TV Screen. This is not an error. We were told that in the past, Omega would mix and match any parts that were available, so it was not really that unusual to see a “mismatch” of parts, similar to the scenario here.

For those who think that the Speedy 125 is too large, the Speedy TV Screen may be the next best alternative. The dimension of the watch is 40mm by 42mm, so it is perfectly sized for the today’s age.

Personally, I have been a Speedmaster fan ever since I started this hobby. In fact, the first watch that I wanted to purchase was a Speedy, but alas, I could not afford it back then. Writing this mini-series have widened my scope on the Speedmasters; I did not know that Omega had produced so many variants of the Speedmasters. It was truly an eye-opening experience for me.

So, here is the first part of the mini-series on the Omega Speedmaster. Watch this space for the next episode, where we will feature much more Speedies from the past!

Note: The watches are owned by a gentlemen collector.