Whenever one thinks of going out for a short retreat, a holiday resort by the beach is perhaps one of the most popular choices with busy corporate titan. After all, being away from the city bustle is much more favourable, where one can enjoy some peace and quiet.

Being at a holiday resort also means that the itinerary might include a trip or two down to the beach. Of course, as watch collectors, we would want to wear something comfortable, and yet suitable for the environment or location that we are in.

So, what are the pieces that we have chosen for this week’s article? Let’s find out! The Sinn U1. This one is the Camo version, which adds an interesting touch to a serious tool watch.

We kickstart our article with one of our favourite tool watches – the Sinn U1.

The Sinn U1 is, in our opinion, one of the most affordable and robust tool watches that money can buy. Cased in steel that was used to construct submarines, and reinforced by TEGIMENT technology, the watch is said to be six times stronger than a typical stainless steel timepiece. It is also waterproof to depth of 1000m, and it also blessed with anti-magnetic propertiesl.

The 44mm watch is powered by Sellita’s SW200 self-winding movement – with a date indicator and a decent power reserve of approximately 40 hours. It is a solid workhorse, although it is pretty basic in terms of its finishing.

There are several variants of the U1 that is available, such as the new Camouflage that was launched last year. The watch is priced at US$2,160, and it is paired with both the green rubber strap and an additional khaki zulu strap. This is certainly a solid piece to add into one’s collection, and it is certainly something that will one will like to wear on a beach day. The simple matte case construction and the excellent readability makes this Oris an interesting option.

There aren’t many watches in the market currently with the Regulateur complication (other than perhaps Chronoswiss who have several models of regulators) – which is basically timepieces where its minutes, hours, and even seconds function are segregated and displayed independently. But it was even more interesting when Oris launched a dive watch with this complication back in 1999, and it has been one of the mainstay in the repertoire ever since.

The new Regulateur “Der Meistertaucher” was launched in Baselworld 2017, with a facelift to further complement its Aquis series. The watch is designed with a contemporary touch, featuring a 43.5mm titanium case, as well as a bold design with large details (e.g. fonts and indices) and red accents. In addition, the lugs, crown, and bezel are rather thick and large as well, which give the watch a rather solid appearance too.
Fitted with the Caliber 749 – based on Sellita’s SW220-1 – the Regulateur “Der Meistertaucher” features a date indicator, as well as a power reserve of approximately 38 hours. The finishing is nothing spectacular, but similar to the Sinn, it is a solid and reliable workhorse.

Priced at S$4,500, we reckon the Oris is an interesting option for someone who is looking for a slightly atypical dive watch. The Seiko SLA17 – a homage to the original 62MAS Dive Watch.

In recent times, many watch manufacturers have decided to produce vintage re-issue watches from their archives. Seiko have jumped onto the bandwagon as well, with a few vintage re-issues that were launched over the last few years. But for today’s article, we are looking at one of the more hotly anticipated pieces – the SLA017, based on the 62MAS.

Launched in this year’s Baselworld, the SLA017 pays homage to the first dive watch that Seiko had produced in 1965. Besides its good looks, the timepiece was well-known for its robustness, especially since the original model was used by the Japanese Antarctic Research Expedition from 1966 to 1969.

The new watch, although similar to its predecessor, comes with several upgrades. First, it is now larger in dimensions, at 39.9mm. Next, it is features SuperLuminova indices in place of Tritium. Finally, the movement that powers the watch is the Caliber 8L35, which was used by both the Marinemaster and Emperor Tuna collection. The self-winding movement is often compared to Grand Seiko’s 9S55, in which the 8L35 is only lacking in terms of the finishing and the stringent adjustment for accuracy. It is nonetheless a wonderful movement, in which it had sufficiently proven itself with the other higher-end dive watches in Seiko’s repertoire.

The recommended retail price for the SLA017 is slightly steeper at €3,800. Only 2,000 pieces of the watch is produced, and it is fitted with a silicon rubber-style waffle strap and an extra stainless steel bracelet. There is definitely a strong demand for this particular piece, and we reckon it is going to be an uphill task for any collector to acquire this timepiece. 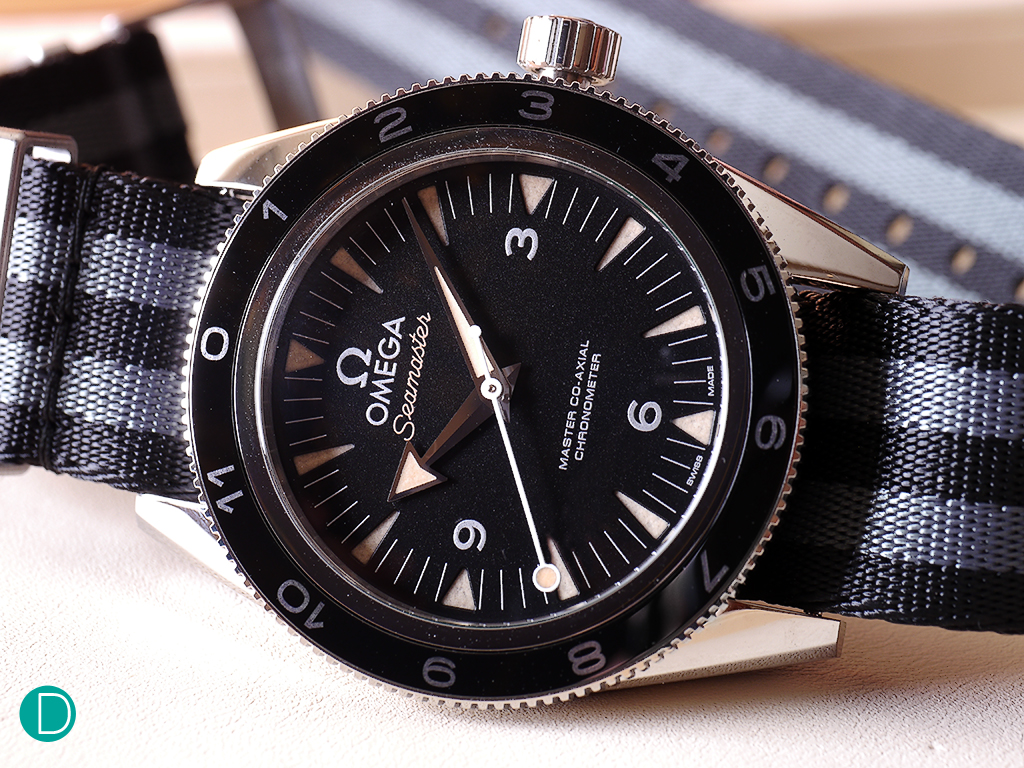 Besides the ever-popular Speedmaster, the Seamaster is one of the main collections in Omega’s stable. After all, it is not just any typical good-looking dive watch – but one that James Bond trusts as well.

There are multiple variants of the Seamaster, of which we have a particular soft spot for the Seamaster 300 SPECTRE Limited Edition. As the name suggests, the watch was worn in the movie SPECTRE. But what truly attracted us towards the timepiece is its vintage-inspired design, which was derived from the Seamaster 300 of the yesteryear. There are also several interesting touches to the watch as well, such as the 12 hour time scale (instead of the usual diving bezel), as well as the Bond-inspired two-tone NATO strap. In addition, the lollipop seconds hand and faux patina complete the entire package – giving the watch its vintage appearance.

Powered by Omega’s Co-axial Calibre 8400, the self-winding timepiece boasts a decent power reserve of around 60 hours. It is equipped with the latest anti-magnetic technology, hence its ability to resist magnetic fields greater than 15,000 gauss. Unlike the usual anti-magnetic watches which use a Faraday cage to protect the movement, Omega uses non-ferromagnetic materials to construct certain components of the movement instead. It is priced at €6,400 (approximately S$10,200), and it is limited to 7,007 pieces. Definitely an excellent choice for a casual, but solid and reputable timepiece.

Read also about the incredible Seamaster which was lost in the ocean for two years, and eventually how it found its way back to the owner. The Yacht-Master 40 – a slightly neglected collection from Rolex’s lineup.

If one is looking to own a Rolex, but wants something that is slightly uncommon from the typical crowd – we have the perfect piece. Cue the Yacht-Master 40 Everose Rolesor.

Launched in Baselworld 2016, the Yacht-Master 40 Everose Rolesor is the first timepiece in the collection that is available in the two-tone combination consisting of stainless steel and Rolex’s proprietary 18K Everose Gold. It is an often neglected model – simply because collectors usually select the Submariner/Sea-Dweller, or opt for the Yacht-Master II. The Yacht-Master 40 is perhaps the “in-between” model, with some design elements that makes it a more contemporary-looking timepiece.

We reckon the new combination, which is a rather pretty timepiece, will attract some collectors to the Yacht-Master 40 collection. The 40mm dimension is almost perfect, and its design is rather fitting for a Rolex timepiece in the modern era. On top of that, it is fitted with the ultra-reliable Caliber 3135. The self-winding movement comes with a date indicator, and a power reserve of around 48 hours. It is priced at S$18,920, which we think is pretty well-priced for an excellent and handsome timepiece.

In recent years, there has been a growing interest in the Royal Oak Offshore collection, especially with new collectors. It can certainly be attributed to its bold and solid aesthetics, which go down well with many younger watch enthusiasts. And in 2016, Audemars Piguet further expanded its collection with the new Diver Chronograph, in four different colours. The new model is definitely an interesting addition, especially since the previous ROO Diver is a bit plain for some.

The 42mm ROO Diver Chronograph is powered by the in-house Caliber 3124/3841, based on the Caliber 3120. It has a bidirectional gold rotor, as well as a power reserve of around 50 hours. The finishing is rather nice, especially with the beautifully engraved 22 carat gold rotor which has the coats of arms for the Audemars and Piguet families. The bridges are decorated with Côtes de Genève, with anglage applied on the edges too.

At the price of S$31,900, there are definitely many other alternatives for a collector to choose from. But if one is looking for a casual, yet bold timepiece, then perhaps this ROO Diver Chronograph might be an excellent timepiece to have in the collection.

In this week’s article, we have featured six solid timepieces for a beach day. Most of them are dive watches – which are natural choices, considering that one will inevitably engage in some water activities along the way.

The watches that we have selected are not merely just solid and well-made, but they are also equally good looking as well. After all, one certainly do want to look good on beach day too.

So, do you agree with our choices? What are some of the watches that you wear on a beach day? Let us know in the comments section below!