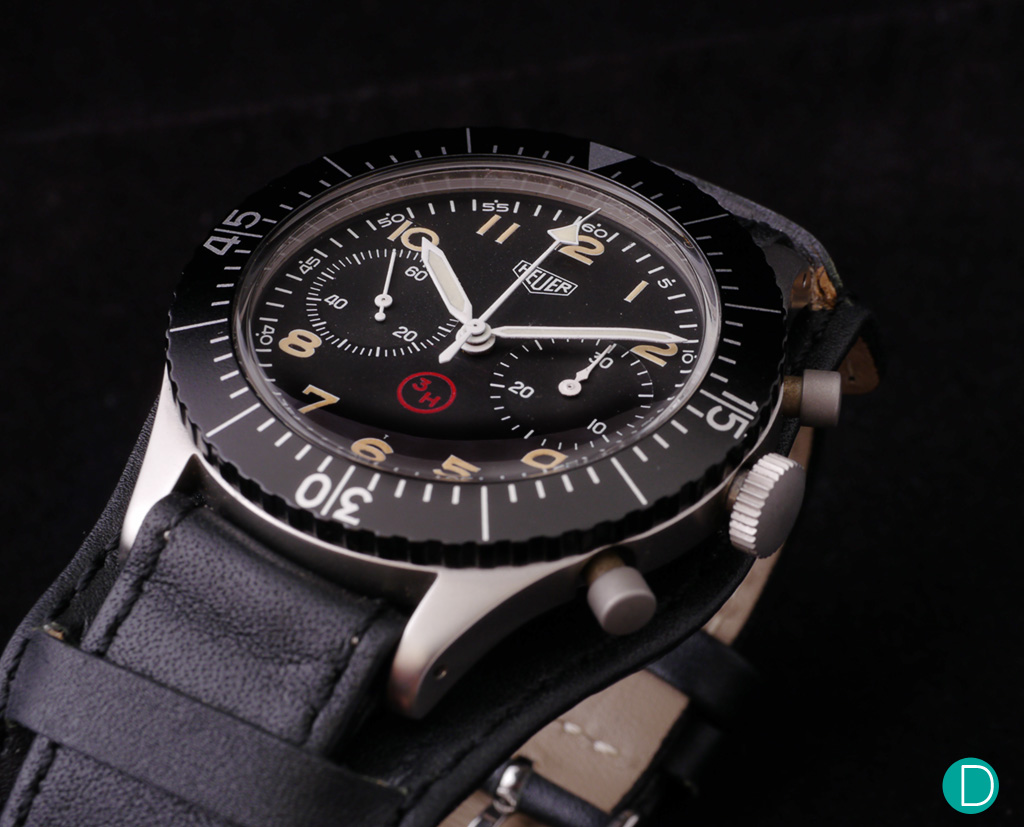 The watch was created to be a Bundeswehr pilot’s instrument, but research shows that it also made its way to the other service branches. Men from the land vocations like the artillery were said to be also issued the 1550 SG. As expected of a tool watch, the timepiece is utilitarian, functional and overall well built. That said, over the production period of nearly four decades, the resulting stock floating in the market today while fundamentally congruous to the original design, are in multiple variations. This might be a cause of concern and confusion for collectors looking for their desired ‘original’. The “3H” indicates tritium, as hydrogen-3 is the chemical compound for that radioactive luminous material. The lume on the hands, tip of the chronograph hand, and Arabic numerals all match and have aged beautifully. In this review, we are looking at a “classic 3H/T” with a big letter red 3H-symbol and a tiny “T” that appears just above “6”. It also bears the “standard” Heuer logo which fits inside :58 and :02.

The stainless steel case has a gun metal color with a brushed finish. It measures 42mm in diameter and 13 mm in thickness. The case construction is mostly traditional, in the style of early chronograph wristwatches. It is a two piece case, with a 4-screw caseback design. The pump pushers are easy to access and has a good actuation mechanism. The unsigned big crown also makes it easy to wind and adjust. The 4 screw caseback with military markings. The Heuer Bundeswehr chronograph measures 42 mm in diameter and is fit in a stainless steel case with acrylic display. A true icon of time, representative of military timekeeping history in the context of the Cold War conflict.

The Bundeswehr 1550 SG on the secondary market today is normally priced between $4000 to $10000. Prices affected in general by the condition of the watch, and popularity of dial types. While it may vary across different vintage watches, a pertinent dilemma stands for Bundeswehr collectors. Considering that the watches were produced from 1955 to 1990, collectors may struggle to decide if they would want the earlier production models; deemed as more authentic, or the later production models, with updated parts, and understandably in better condition. That said, our preferred dial variation is shown in the model we review today, circa 1970s, which is rather rare to be found in original yet pristine condition.