There are various reasons as to why watch collectors are still in awe of Tourbillons. To some, it is the fact that they appreciate the craft of manufacturing of a tourbillon. For others, it may be due to the exclusiveness as it is usually reserved for higher-end timepieces. Either way, it does not dispute the fact that tourbillons are still massively popular with watch collectors today. And for today’s Throwback Sundays, we shall be recommending six tourbillon timepiece from independent watchmakers in our archives which we believe are great additions to one’s collection. 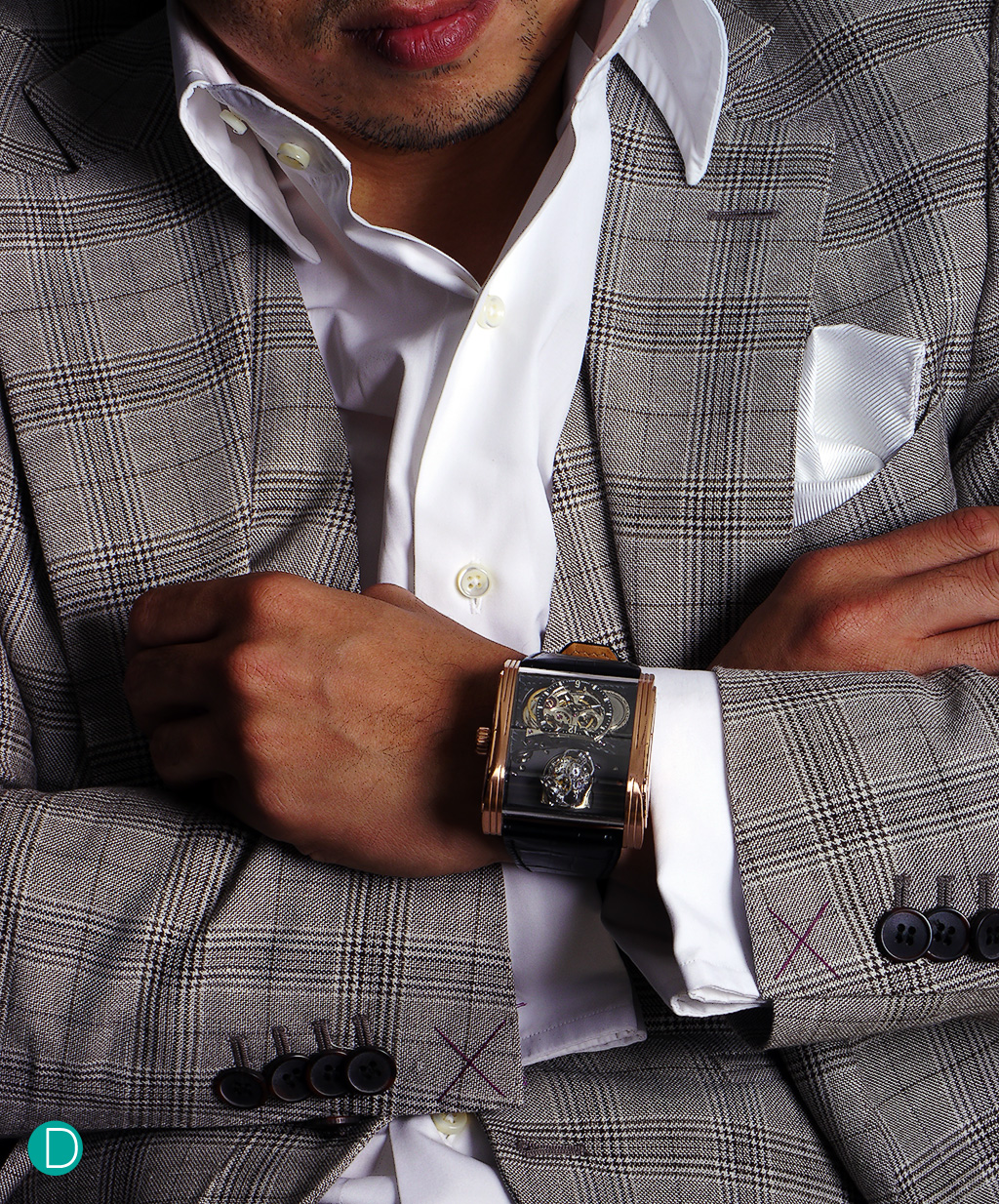 The Cabestan Triple Axis Tourbillon on the wrist.

The first timepiece that we are going to highlight today is from Cabestan. We have always been intrigued by Cabestan, as its watches are manufactured in cases that have an unusual shape. In this year’s Baselworld, Cabestan wowed us again with its latest novelty: the Triple Axis Tourbillon.

As its namesake suggests, this attractive timepiece features a flying tourbillon that turns on three different axis. The flying triple axis tourbillon, equipped with a spring balance oscillating at a frequency of 3 Hz, rotates separately for each axis in 17 seconds, 19 seconds, and 60 seconds respectively. This gives an interesting touch to the watch; it seems as though the watch has got a mechanical life of its own. Furthermore, thanks to the design of the watch, we are able to gain a greater perspective of this triple axis tourbillon. It is truly a mesmerizing sight to behold.

In addition to the triple axis tourbillon, the watch features the fusée & chain system – a signature of Cabestan. This provides a constant-force to the tourbillon escapement. Throughout its 72-hour power reserve, the watch is able to ensure a regular supply of torque as the mainspring winds down.

The Cabestan Triple Axis is imposing, and it has got a great wrist presence. It is a very well-made timepiece, with excellent credentials in the technical aspects. We have covered as one of our picks for Best of Show for Baselworld 2015 when the watch was shown for the first time. The Global Launch of the Cabestan Triple Axis Tourbillon is slated for this week, in Singapore. Watch out for details on the launch events. Grönefeld Parallax Tourbillon in stainless steel, limited to 12 pieces. The watch is also available in a red gold case limited to 28 pieces.

Next up, we have the Grönefeld Parallax Tourbillon. For those who have not heard of Grönefeld, they are an independent watchmaker from Holland. The two affable brothers, Tim and Bart, cut their teeth in Renaud et Papi, and they have created some magnificent timepieces in recent years.

The Parallax Tourbillon is one of their latest creations, and won the Tourbillon Watch Prize in Grand Prix d’Horlogerie de Genève 2014 (GPHG). Quite a feat for a small, independent watchmaker to have beaten illustrious competitors like Breguet, Harry Winston, and Blancpain for this prize.

We like the Parallax Tourbillon for two reasons: it simple avantgarde design, and its technical ingenuity. The design of the face of the watch, for instance, is minimalist. This allows the bulk of the attention to be focused on the “flying” tourbillon itself. It also features practical functions, such as the push down crown (which reduces wear and tear on the fragile stem) and the cage stop-finger. More information on these innovative creations can be found in our review of the watch here.

The Grönefeld Parallax Tourbillon is certainly worth some serious consideration. It is a graceful and well-made timepiece, and we rather fancy that it gives a lot of the bigger names a run for their money. 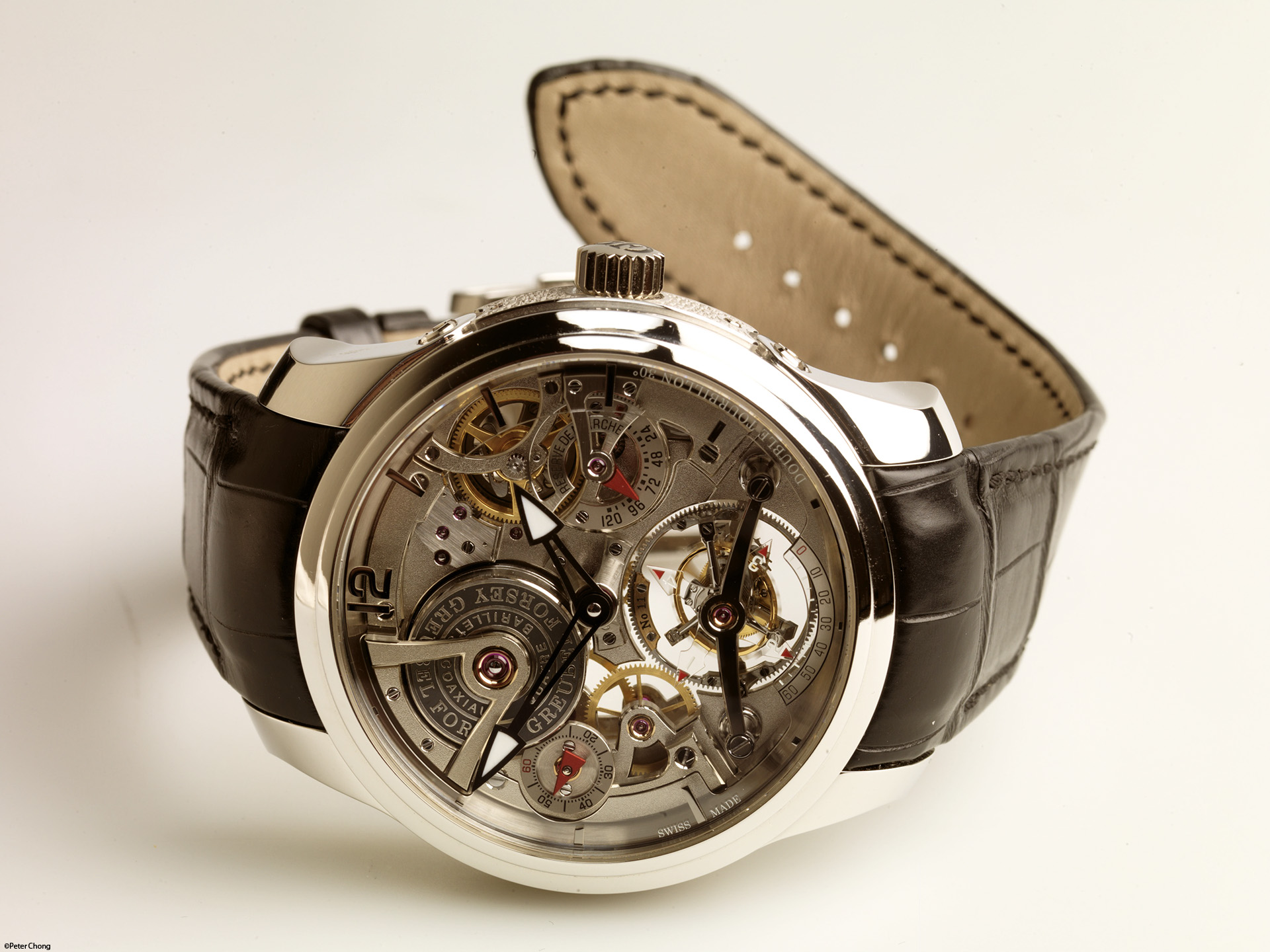 The Double Tourbillon 30° Technique, from Greubel Forsey. Click on the image for a 1920×1080 wallpaper. Free for non-commercial and personal use.

Amongst some horology enthusiasts, the name “Greubel Forsey” is almost synonymous with grail watches. It is not difficult to see why. The brand, started by two veterans from Renaud et Papi, is well-known for making some of the world’s most stunning timepieces.

This particular timepiece, called the Double Tourbillon 30° Technique, is rather intriguing. As its name suggests, it features two tourbillons together. The outer tourbillon completes a revolution in 4 minutes, while the inner tourbillon does it in a minute. Also, the inner tourbillon is inclined at 30°, in which it provides greater accuracy and a more spectacular view of the tourbillon.

Another interesting feature of this timepiece would be its design. The watch is constructed in such a way that there is a great impression of depth, contributing to a three dimensional presence. It is a joy to behold.

For more on the Greubel Forsey Double Tourbillon 30° Technique  look at out Watchscape feature here. Photographs will do more justice than mere words to showcase this exquisite timepiece. At the first glance, the Leroy Chronomètre à Tourbillon may seem to be an ordinary three-hand timepiece. This is no surprise, as there are no hints or any indications of the presence of a tourbillon in the movement. This is very unlike the other watches that we have highlighted, as many of them have prominently incorporated the tourbillon into the designs of their timepieces.

The Leroy Chronomètre à Tourbillon is beautiful timepiece. A captivating grand feu dial stands proud as one gazes on the watch. The enchanting and intricate filigree grid featuring a “Marie-Antoinette” tapestry motif in the middle of the watch providing a frame.

Flip the watch over, and open the hunter case back, and the excitement continues. Beneath the guilloché hinged back cover hides a sapphire crystal, in which it exposes the movement in full glory. Therein lies many striking features, such as the direct impulse escapement, a fusée & chain system, as well the diamond impulse pallets. For more on these technical bits, we refer you to this detailed review on this timepiece.

The Leroy Chronomètre à Tourbillon is a fine and discreet timepiece. We also love the fact that it is extremely well-finished, be it in terms of the movement or the exterior portions of the timepiece. The attention to detail here is amazing. Highly recommended. 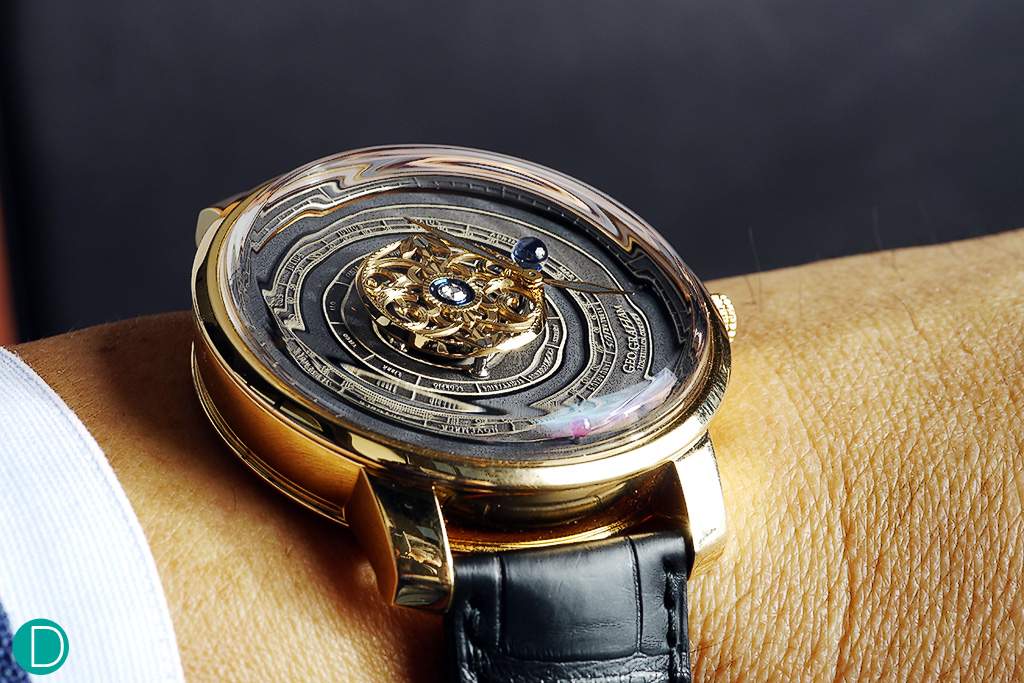 The Graham Tourbillon Orrery, with an obligatory wristshot.

There are watches, and then there are timepieces that are out of this world. The latter is certainly apt to describe the Graham Tourbillon Orrery, a timepiece that features an intriguing mechanical solar system model.

When we first saw the timepiece, we were awe-struck. The watch is stunning, to say the least. The contrast between the pink gold case and the black dial is simply ethereal. We love how the watch is able to maintain its elegance and class, despite its complications.

One of the most unusual features that is fitted into this particular timepiece is the mechanical solar system model. Although it only showcases a few elements of the solar system (i.e. the Sun, Earth, Earth’s Moon, and Mars), we thought that it is sufficient to highlight the brilliance of both Graham and Christophe Claret (the two collaborated to create this dazzling timepiece). On top of that, the watch also features a year indicator at the back. Two additional discs are shipped with the watch so that would ensure it it can indicate up to the year of 2299! Click here for our review on this magnificent timepiece.

The Angelus U10 Tourbillon Lumière.

Finally, the last watch to be featured in this week’s Throwback Sundays would be the Angelus U10 Tourbillon Lumière. If one has not heard of Angelus before, the watchmaker was founded back in 1891, and they were resurrected recently after nearly 40 years of hiatus (no thanks to the quartz crisis in the 70s).

The U10 Tourbillon Lumière is Angelus’ first timepiece since its revival, and it was launched in this year’s Baselworld. The watch features several unique design cues, in which it looks very modern and avantgarde. One of the more interesting design cues would be the face of the timepiece, in which there are two different windows to separate the dial and the tourbillon. The watch also features many sapphire glass openings, in which it allows one to gain a better view of the movement and the tourbillon.

The Angelus U10 Tourbillon Lumière is a very conversational timepiece, and we highly recommend it to those who want to own a tourbillon a twist. This is a stunning timepiece, and we will certainly be keeping our eyes peeled for any new novelties from this fascinating watchmaker.

If one can recall, they would have remembered that we have done a compilation on starting a collection with independent watches earlier, and we wanted to up the ante by looking at those that features a tourbillon.

This week’s selection features a wide selection of tourbillon timepieces, ranging from the conversational Angelus U10 Tourbillon Lumière to the more discreet Leroy Chronomètre à Tourbillon. Different strokes for different folks. With our choices, we hope that we have at least covered a few timepieces that we think would be a good primer to start one’s explorations.

We have come to the end of this week’s Throwback Sundays, and we hope that we have bedazzled you with six wonderful tourbillon timepieces from independent watchmakers. Let us know some your thoughts about our selections, as well as some of the tourbillon watches from independent watchmakers that you think deserve a place in this article. Till then, have an excellent week ahead!

Editor’s Note: We understand that there are many other excellent Tourbillon timepieces from many other independent watchmakers which we have not featured today, but fret not. We will be doing a second installment for tourbillon pieces, and we will definitely include some of them in it the next time.