In this week’s Throwback Sundays, we are venturing deeper into the abyss of watch-collecting. From a few weeks back, we have featured some pieces that you should look out for when you start collecting wristwatches. The next step would be the traditional collector brands like Omega, Rolex, perhaps Hublot, and then Jaeger LeCoultre, IWC, Blancpain, Breguet and the like. Throw into the mix also the “Holy Trinity” of Patek Philippe, Vacheron Constantin and Audemars Piguet. And the boys from Germany, and perhaps a Grand Seiko. Or perhaps instead of taking the path well traveled, you might want to embark on collecting watches from the Independents Watchmakers. Here is our six recommendations to start your collection.

There are various reasons why collectors want to go for Independent watchmakers also known as Indies. Some of these are exclusivity, high craftsmanship, personal touch and passion are several common justifications for that. Being able to deal directly with the person who designed and built your watch is a very emotional part of the collecting experience. And we highly recommend it! H. Moser and Cie is perhaps one of the most minimalist and understated Indies in the horological industry. That can be a double-edged sword, as some may prefer their watches from Independent Watchmakers to stand out from the crowd. As such they may be looking for something unique and perhaps a little unorthodox.. The Venturer, and perhaps most of H. Moser and Cie’s pieces, are the opposite. Their idea is to keep the design as simple as possible, and it is evident in the collection. None more so that the perpetual calendar, which the epitomes of their ethos to the max as one of the cleanest looking perpetual calendar equipped watch in the market.

The Venturer Small Seconds is what we are recommending. This is their entry level model, and we thought that it is a great piece for an introduction into the world of independent watchmaking. It is a well-made, simple, and beautiful dress piece that will pair very well with any formal wear. The Venturer Small Seconds also features H. Moser and Cie’s famous fumé dial, and that makes it stands out among the other dress watches in the same category. We did a feature on the Venturer Small Seconds sometime back. Click here for the report and we personally feel that this is definitely worth some serious consideration. The Speake-Marin Velsheda. This is a novelty from 2014, and this single-hand watch is pretty breathtaking.

Speake-Marin is certainly one of the Independent Watchmakers who is well-known by many collectors. He recently hooked up with the actor Pierce Brosnan who is now promoting his watches, and soon Speake-Marin may well be a household name. The Speake-Marin brand is perhaps most well-known for its Resilience collection, but we thought that there is another model that is worth a look: the Velsheda.

The Velsheda is also an entry level piece from Speake-Marin, but it is definitely no slouch. It features the signature Piccadilly case, as well as the “Topping Tool” motif that is synonymous with the brand. Along with these Speake-Marin DNA features, this piece is a little special as well. For some, it may be a surprise to know that this piece is actually a single-hand timepiece. This means that it only tells time using one hand, which indicates both hours and minutes at the same time (so therefore, in the picture, the watch is telling us that it is approximately twenty-five minutes to seven). Definitely a conversational dress piece, and an interesting one to start your indies collection! 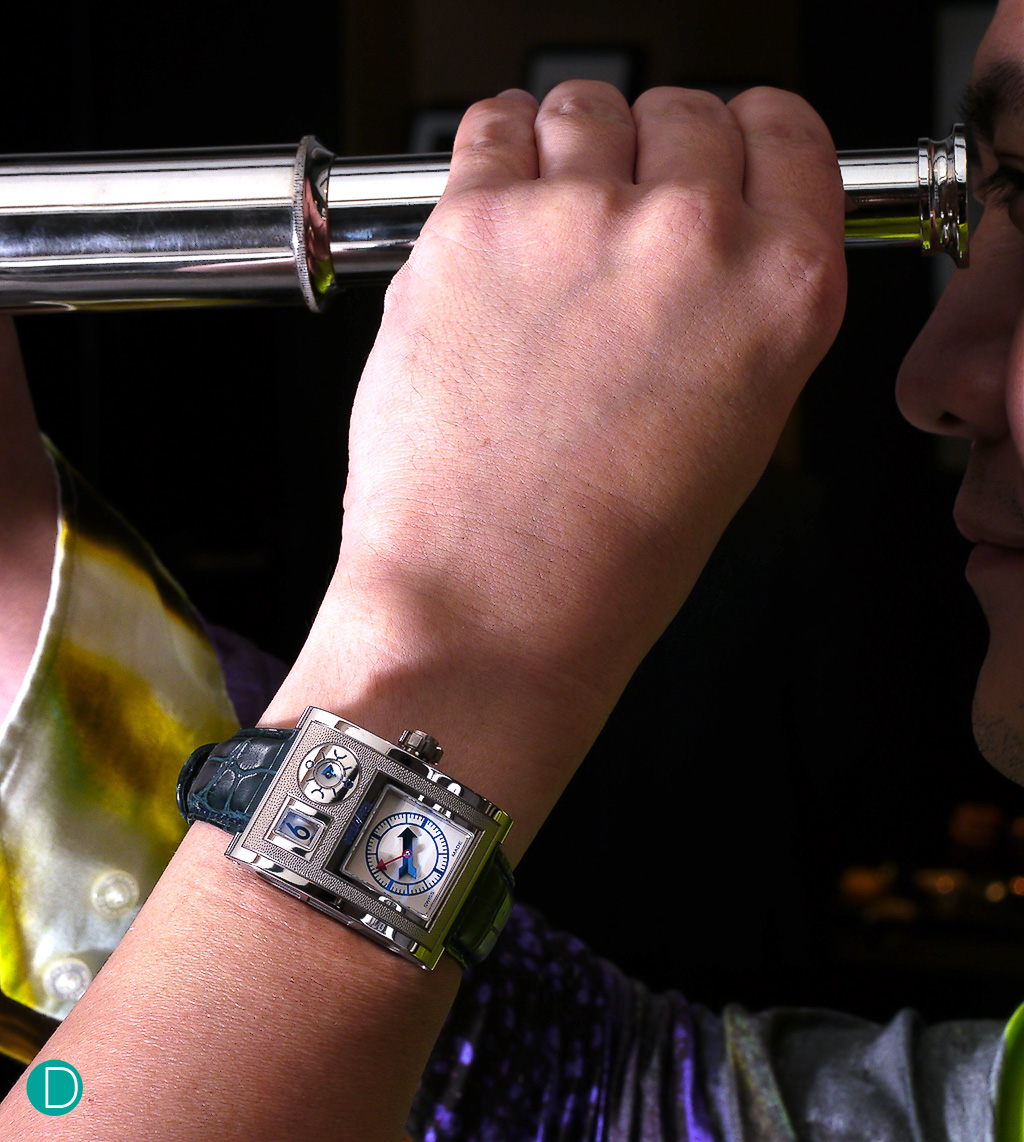 The Goldpfeil Vianney Halter is shown here on the wrist of the owner.

When one thinks of Independent Watchmakers, Vianney Halter is certainly one of the personalities that come to mind. Wildly individualistic with a rock star persona to match, the watchmaker is behind some of the most iconic timepieces in the world of haute horlogerie, such as the Deep Space and the Antiqua.

The Goldpfeil Vianney Halter, as mentioned in our review article, was a project between Goldpfeil and AHCI (Académie Horlogère des Créateurs Indépendants). This particular watch, like Vianney’s other creations, is certainly abstract and thought-provoking. For this timepiece, Vianney pays particular attention to geometry. Different shapes are used to create the windows for different indicators, and the result is rather staggering. It amazes us that Vianney had managed to create a synergy between the various shapes, and allowing them to combine seamlessly into the watch case.

A small hitch perhaps is that the Goldpfeil Vianney Halter had completed its run of 108 limited edition examples. However, pieces in good condition do come up occassionally  at auction houses and the secondary market. And the best part is that the prices are usually rather reasonable. So keep a sharp eye on the lookout for one, and you might just be rewarded with a distinctive watch by an Indie. There are Independent Watchmakers, and there are celebrity Independent Watchmakers. Maximilian Büsser certainly is the latter. However, it is even more surprising that Max is no watchmaker. But he is the creative genius behind Maximilian Büsser and Friends (MB&F). He cut his teeth in Jaeger LeCoultre under the watchful tutelage of the late great Günter Blümlein. And went on to set the horological world ablaze when he was hired by Harry Winston to run the Opus Project.  He then topped that by going his own way by setting up MB&F. And soon became well known for creative timepieces that are beautiful sculptures, always esoteric, complicated and always a wonderful story. The Horogogical Machines (HM) series certainly shows his creativity and genius. Then came the Legacy Machines (LM). It was perhaps a small surprise that the LM series is actually rather restrained, and even considered dressy by some.

The LM101 is the latest incarnation from the LM series. Although the LM101 is the entry level timepiece, it is well made and no less attractive than its more expensive brethren. The finishing and attention to detail is comparable to other MB&F pieces.

We think that the LM101 is a nice entry into the world of Independent Watchmakers. The LM101 is indeed a great timepiece. It looks very beautiful with stunning visuals and the workmanship is excellent. It is a suitable watch for dressy occasions as well, and it is one timepiece that will certainly gain curious attention. Find out more about the LM101 from our article here! Whenever one thinks of Romain Jerome timepieces, it is usually the Titanic DNA pieces and other such exotica that comes to mind. However, this image is beginning to change. With new CEO Manuel Emch at the helm, the brand image is turning towards providing interesting and unusual timepieces but directly targeted at the entry level of haute horlogerie.

Our recommendation is a novelty from Baselworld 2015: the Romain Jerome Subcraft. The Subcraft is a collaboration between Romain Jerome and Alain Silberstein, and it is based on an earlier model called the Spacecraft. What they did was to to use the Spacecraft as a base, and play with Alain’s ideas. The design language is changed. This can be seen most distinctively as the new shape: all the edges are rounded, and reminding us of a well loved pebble, smooth with constant rubbing as a constant companion.

While we like the Spacecraft, but we think the new Subcraft is a more special. The rounded edges gave the watch a very organic feel, and the sensation of wearing and feeling it is just different. For those who are looking for a fun timepiece, perhaps this might be the timepiece for you. More information on the Subcraft can be found on our hands-on review here. The Sarpaneva Korona K0 Northern Lights, with its luminescence in full glory.

We shall end off this week’s Throwback Sunday with something the unusual and fun: the Sarpaneva Korona K0 Northern Lights. Stephan Sarpaneva is a talented Independent Watchmaker from Finland, and he draws from his very distinctive facial expression and experiences as a Scandinavian to portray his vision.

As mentioned in our article on this watch previously, the Korona K0 Northern Lights is another novelty from this year’s Baselworld. The watch features the usual Sarpaneva DNA: it has got the iconic Korona case, and the signature “Sarpaneva Moonphase”. And the stands out feature: the magnificent lume of this timepiece. Sarpaneva collaborated with Black Badger Advanced Composites, and the result is pretty amazing. The Korona K0 Northern Lights glows brilliantly in the dark with just a few minutes of exposure to a light source. This is absolutely brilliant and brings the watch to a whole new level. For those folks who enjoy clubbing, this timepiece will definitely steal the limelight from others as UV light makes it glow even more vigrously.

Similar to what we have mentioned in our previous Throwback Sunday article, watches from Independent Watchmakers do not necessarily have to be crazy or ridiculously expensive, though some certainly are. We will cover the ultra expensive Indies in another Throwback article soon.

From our list of watches that we have highlighted today, we see a good distribution. Ranging from dress pieces to the elaborate and whimsical. And the best part of today’s recommendation is that all these watches are rather affordable…perhaps, in our estimatation, at the entry point to haute horlogerie.

We hope that this week’s Throwback Sunday has given aspiring collectors a flavor of Independent Watchmaking. Of course, this is just the tip of the iceberg. More soon. Pronto!