Last week, we have covered six timepieces which we thought were interesting in their time-telling capabilities. However, as we have mentioned, there are just too many watches that we feel had deserved a place in that list.

Hence, for this week’s Throwback Sundays article, we continue to with another six engaging timepieces which we reckon had an unusual way of telling time. So, without any further ado, let’s go! The A. Lange & Söhne Zeitwerk Minute Repeater, on the wrist.

The first watch one of our favorite German watchmakers: A. Lange & Söhne. Over the years, A. Lange & Söhne had produced some rather stunning timepieces. But when it comes to watches that tells time unusually, then perhaps nothing can possibly come to close to the Zeitwerk.

The Zeitwerk, which made its first appearance in 2009, was inspired by a great clock in the famous Semper Opera House in Dresden. The clock in the building features a five minute clock, with a digital time display. Must have been a radical idea back in 1841.

Now, back to the Zeitwerk. The watch features a digital display for both the hours and minutes. Despite looking very simple, the Zeitwerk’s movement is extremely complex. The most basic variant, with only a subsidiary seconds hand and power reserve indicator, requires no less than 415 components to manufacture. This is because to have sufficient power to cause all 4 digits to jump simultaneously, the mainspring needs to be very powerful. This meant a very thick mainspring. Which in turn meant that the delicate escapement had to deal with a huge torque variance when the watch was fully wound to when the mainspring is depleted. To tame the power, they decided to use a remontoire system, and the side benefit is a constant force escapement. Our article covering the launch in 2009 carries the details.

The range was further developed with the limited edition Zeitwerk Phantom in 2010, the Zeitwerk Striking Time in 2011 and the Zeitwerk Minute Repeater in 2015. Next up, we have the Cabestan Winch Vertical Tourbillon. For some readers, they might recall that Cabestan was originally the brainchild of Vianney Halter and Jean-Francois Ruchonnet. However, the project was met with various issues and complications in the past. Now, with the company has been reshuffled and led by Lionel Betoux, Cabestan is back on track again. They have even launched a new novelty this year- the Cabestan Triple Axis Tourbillon. But we shall save that for another occasion.

The Winch Vertical Tourbillon, notably, is the first model from the Vallee de Joux- based independent watchmaker. As mentioned earlier, the watch (prototype) was fraught with many issues during the early stages. This is because the watch featured some technically-demanding complications, such as the fusee-and-chain system and the vertical tourbillon. The system is linked to the drums, which features the hour, minute, and power reserve indicators. The hour indicator, incidentally, is operating with a jumping hour mechanism. Work by Eric Coudray to revise the movement was undertaken, an the watch was relaunched in 2013 to much success.

Overall, the Winch Vertical Tourbillon is an exciting timepiece. Not only does it have an interesting way of telling time, but it looks aesthetically amazing as well, partially contributed by its unique case shape and the open-work mechanism. We reckon this is another conversational timepiece that will attract a lot of attention, and possibly become a massive icon in time to come. There are some watches which are eye-catching, and then there is the Devon Works Tread 1. Launched in 2010, the Tread 1 had definitely caught the horological world by storm. It was so distinctive and different from its counterparts that no one had actually come close to the aesthetics and mechanics of this timepiece.

Interestingly, the people who coined the Tread 1 were not horologist by trade. Scott Devon and Jason Wilbur, the brainchild behind the watch, were more known for designing cars and industrial products. It was fascinating, to say the least. The end result, which is the watch in this case, is like nothing that we have seen in the watch industry itself. This is certainly a breath of fresh air.

The watch, as one might have observed from the picture above, tells the time via a belt system. These belts are driven by electric motors, and its movement is akin to a conveyor belt machine in operation. This is pretty unusual, and it gives the user a visual treat as well when one is looking at the Tread 1. Another interesting feature of this watch is its “sleep” function, in which the timekeeping functions continue without displaying the time. This, in turn, helps to save the battery life of the watch. And since we are on the subject of battery, it is noteworthy to know that the Tread 1 can be charged by induction via its watch box. A power reserve of approximately 2 weeks is available on a full charge.

Of course, the Devon Works Tread 1 is certainly not everyone’s cup of tea. Its steam-punk design and massive watch case may be too loud (figuratively as well as literally, as when the motors activate, it makes a whooshing sound) for some, and purists may be put off by the fact that it is not a pure mechanical timepiece. Nonetheless, the Tread 1 is an outsider’s take on telling time, and it offers an interesting reinterpretation that had not crossed the mind of most watchmakers in the industry. 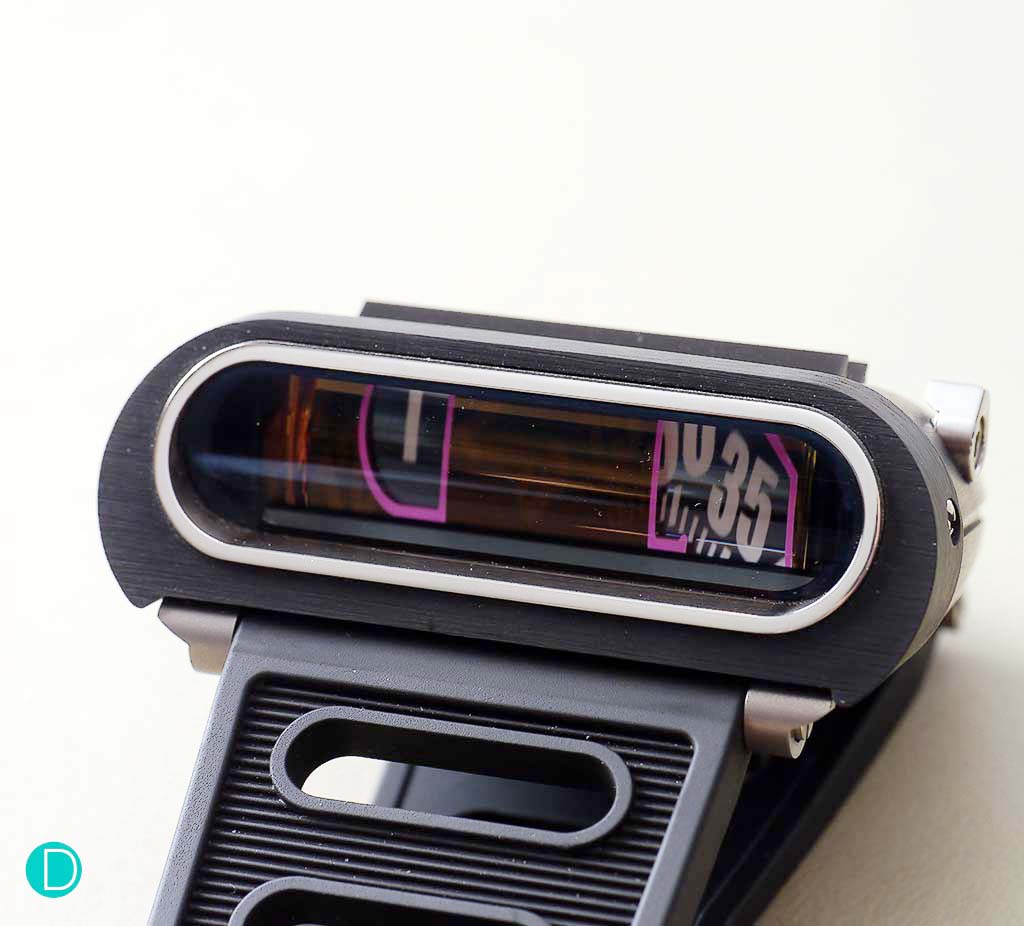 The MB&F HM5 Carbonmacrolon. Dubbed as a “Driver’s Watch”, the HM5 allows drivers to tell time more easily with the way the indicators are positioned.

We now turn our sights to an independent watchmaker that makes some of the most curious and exciting watches that we have seen in the industry. The watchmaker in question is none other than Maximillian Busser and Friends, or MB&F for short. We have always been great fans of MB&F’s works, for they offer collectors some of the most interesting and novel timepieces that we have seen in the industry.

The Horological Machine 5, also known as the HM5, is one of the seven outstanding watches in the impressive Horological Machine collection. Dubbed as a “Driver’s Watch”, the watch is not only aesthetically inspired by the automotive industry, but it is also designed to allow the driver to tell time easily when his or her hands are holding the steering wheel of the car.

The highlight of the HM5, we reckon, is the way it displays the time.  It features the bi-directional jumping hour function whose image is picked up by a prism to bring the light 90° to eye level. It was, curiously, inspired by two interesting retro watches in the 70s: a Girard Perregaux LED Watch and an Amida Digitrend Jump Hour Watch. While it was not an entirely new idea, MB&F had made massive improvements to the flaws of the Amida timepiece and restyled the HM5 to make it more suitable for collectors in the 21st Century. The Ludovic Ballouard Half Time, in Chinese.

For some of our seasoned readers, you might have recalled that Ludovic Ballouard had previously created the wicked Upside Down watch. And if you thought that the Upside Down was impressive, then you might be possibly more awed with another of Ludovic’s creation- the Half Time.

When we first saw the Half-Time, we were a little confused. The dial was a little peculiar, not because the version we saw was in Chinese (well, we had taken Chinese classes in school), but because we could not really recognize anything that was on the dial (well, nothing on the dial resembles any Chinese word, except for the one in aperture at the 12 o’clock position). It was like some sort of mishmash, and it was so unlike the other watches that we have seen so far. We finally understand what the watch was all about, when we told that the watch features a dial that is dissected into two halves. The top half of the watch moves in the clockwise direction, while the bottom half moves in the opposite direction. Because of its configuration, the number will match with each other in the window at the 12 o’clock position. This, interestingly, is how the hour display works. As for the minutes, it is indicated with a retrograde minute indicator at the 6 o’clock position of the watch.

Remarkable! It is such a contradictory watch: the concept of telling time is highly unusual, and yet it is fitted to a classy and dressy watch case. This is probably the perfect watch for someone who wants to own a conversational timepiece, and yet he can wear it with his usual office/ business attire. Now, who says that dress watches must be boring? The Ressence Type 3. This is a newer version, which features an oil temperature indicator.

Finally, we conclude the article with the Ressence New Type 3. The Type 3 shot to fame in 2013, when it won the Horological revelation Prize in that year’s edition of the GPHG (Grand Prix d’Horlogerie de Genève).

Aesthetically, you can already tell that the Ressence Type 3 is an atypical timepiece. There seems to be something unique about its dial that makes it so different from the other watches. That’s right. What makes the Type 3 so special is its construction, in which it features two sapphire glass domes and a thin titanium plate in the middle. The lower dome features a heavily-modified ETA2824-2 movement, while the upper dome is filled with 32.5ml of oil. Interestingly, the various indicators are suspended in the oil. On top of that, the face of the watch is constantly changing, as the indicators move accordingly with the minute hand. This is all achievable, thanks to the set of magnets that link the movement and the various indicators together.

The Ressence, in short, is an engaging timepiece. It is so unconventional in so many different aspects, such as the lack of a winding crown and the use of oil as a base for the watch face. On top of that, it feels very tactile and strangely comfortable on the wrist as well. This might be the perfect watch for someone who wants to own a fun and unconventional timepiece.

Well, we have finally concluded the second installment on watches with an unusual way to telling time. Notably, this week’s article features more higher-end watches, but we still think that there is a good representation in terms of styling and genre.

We hope that with these two articles, we have suggested more perspectives on watches. While most watches feature the usual configuration of a dial and two hands, the act of telling time can be done in more creative and engaging manner like the twelve watches that we have recommended. And a lot more fun!

Before we end this article, we hope that you have enjoyed this week’s installment of Throwback Sundays. Please also share with us some of the watches that you have owned that tells time unusually, and do have a great week ahead!