The author is possibly one of the first to receive his Omega Speedmaster 2020 Olympics Tokyo Limited Editions. The watch is currently available, but only in Japan. Most stores, including the flagship Omega Boutique in Ginza are showcasing the watches right now, but only available on order. But here is the story of how he managed to buy one for himself. A friend in need is a friend indeed – so the saying goes. From the time I laid my eyes on the New Omega Speedmaster 2020 Olympics Tokyo Limited Editions Collection, I was hooked on that one – the white and black “Panda” version.

So I called my friend in Japan and asked if he could check out when the watch was available. And as luck would have it, he was traveling and not in Tokyo. So the next best thing? He called his assistant and told her to head down to one of the authorised dealers – so efficient she was, she called him half an hour later and said one was available! He called me from the airport (he was boarding a flight back to Tokyo) and said he had found one piece – do I want it? “Duh… Go for it!” I said. And the next time I heard from him was when he arrived back in Tokyo and told me that his assistant had managed to get one for me. Perfect! I was going to visit Tokyo and would pick it up myself and that was top priority. On the first day of our arrival, the priority was to collect the watch. And collect we did. We met at the Akihabara Station and then made our way to the Ponta Honke tonkatsu restaurant. First things first, make the order for your meal and then the unboxing!

Oh my word! Taking the watch out of the box, the heft feels nice and the dial was even more attractive in metal. Wow around the table… applause, applause. What a new acquisition. What a new catch! Omega is the official timekeeper for the Olympics and for 2020, they had released 5 versions of the Omega Speedmaster representing the 5 rings of the Olympics logo. The 5 colours are blue, black, red, yellow and green. Personally, I love the black (and white) and the blue version. But I managed to get hold of the white and black – and it is now my favourite.

So what are the differences other than the dial change?

Well, for one, indices are also different. Unlike the normal Speedy which is printed, these indices are applied and so is the Omega logo.Secondly, the hands are rhodium plated and the tip of the seconds hand is red. Thirdly, the words “Speedmaster” is also in red – red being the colour of the sun on the Japanese flag. Of course, the case back is unique to this edition – showcasing the Tokyo 2020 Olympics. I was told it takes upwards of 15 minutes to laser engrave one of these case backs.

On the underside of the lugs, an Omega emblem is engraved, on another side the words “stainless steel”. On the third side, the watch number which is also found on the regular Speedy. This style, with emblems engraved on three lugs is also seen in recent Speedmasters. And is also present in the Speedy Tuesday. The limited edition number is found on the case back X/2020. 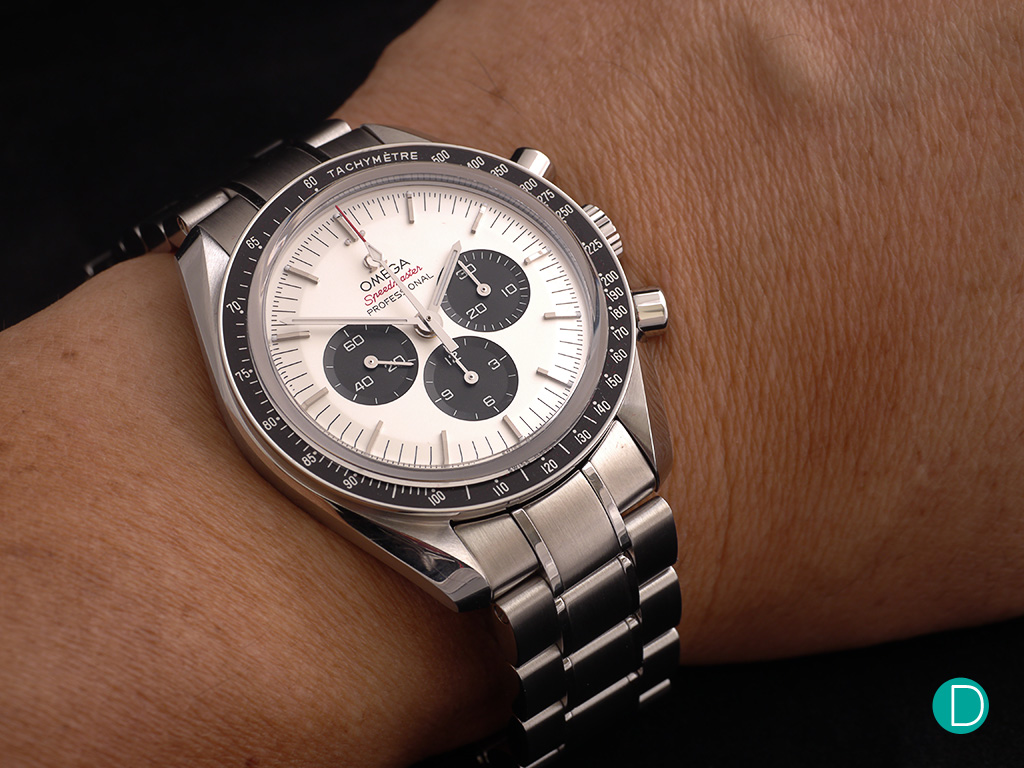 Enough on the details… So since we were in Tokyo, why not hunt for another one. Now that I have the Panda, I was hoping to score the blue. We went to no less than 5 watch boutiques but none were available. They will only tell us that they are taking reservations and there are none available at this point in time. Makes me feel extremely lucky to have found one for myself.

With two years to go before the Tokyo 2020 Olympics, Omega is taking their time to fulfil the 10,100 pieces they have for this series. 2020 pieces for each colour and I suspect the Panda will sell out quickly followed by the red and then the blue. This series will only be available in Japan and not any other market. So for those who want this, you have to make your way to Tokyo to find or reserve a piece. Retail prices are ¥680,400 for the Steel models (Blue, White and Red). The collection also feature steel and gold for the Black and Green, and the retial is ¥842,400.

All I can say is that I am lucky… VERY lucky!