Earlier in the year, we reviewed two timepieces from Vacheron Constantin’s fledgling FiftySix collection: the Day-Date, and the Complete Calendar. They are interesting additions to the grand dame’s ever-growing catalogue of watches and got people talking about the FiftySix collection as a whole (the good, the bad, and the ugly). But there is one more watch from this collection that we have not touched on. This watch is perhaps the most interesting, not because of its complications – it only displays the date – but because it’s lead to a lot of conversation about the future direction of the brand. Here, we bring you the details and our thoughts on the new Vacheron Constantin FiftySix Self-Winding. The FiftySix collection is inspired by the vintage Vacheron Constantin Ref. 6073, which was first presented in 1956 (hence ‘FiftySix’). The watch is distinguished by its shape, and notably, its lugs, each depicting a branch of the Maltese Cross, the brand’s emblem. They are extremely pronounced on the Ref. 6073, with very clear starting and end points. The lugs on the FiftySix Self-Winding clearly resemble the branches of the Maltese Cross as well but they are executed in a different way to the Ref. 6073. They flow and merge into the thick flanks of the case, giving it a sportier profile than perhaps intended. It measures 40 mm in diameter and comes in either stainless steel or rose gold. Protecting the dial is an old-school box-type crystal rising well above the bezel. Historically plexiglass or mineral glass, the crystal is now in sapphire which is far more scratch-resistant while also preserving the retro-contemporary look of the FiftySix Self-Winding. The FiftySix Self-Winding is available in either rose gold or stainless steel.

The sector-type dial of the FiftySix Self-Winding features two subtly different tones and finishes for the inner and outer dial. This enables some interesting light play, giving the watch an extra touch of depth and personality. The outer dial is punctuated by alternating Arabic numerals and baton-style hour markers, both of which are applied. The date is displayed at 3 o’clock through a simple rectangular aperture. If you’re a pragmatist, you’ll love the date display, given its unparalleled usefulness and convenience as far as watch complications are concerned. If you’re a purist, you’ll be irritated by the low-effort execution, if not by its mere presence on the dial. Bottom line is, when it comes to aperture date displays, you can’t win over everyone unless it is central to the dial design (like in the Lange 1). Lastly, indicating the time are two lume-coated pencil hands for the minutes and hours, and a sweeping lancet hand for the seconds. Overall, the FiftySix Self-Winding is pleasant to the eye if only a little confused (neither dressy nor sporty, probably casual). The box-type crystal is a lovely touch on the FiftySix Self-Winding, adding plenty of nostalgia and character.

The FiftySix Self-Winding is powered by the Calibre 1326, which is a movement manufactured by Richemont’s rarely-mentioned Manufacture Horlogère ValFleurier. Yes, it means this isn’t a Vacheron Constantin movement, though it is Vacheron Consntantin-finished. As to be expected, the fact that the FiftySix Self-Winding doesn’t have an in-house movement has ruffled some feathers. Many enthusiasts have questioned the resolve of the brand in working towards the goal of 100% Geneva Seal-stamped movements. The introduction of the Calibre 1326 within the FiftySix Self-Winding appears to be a step backwards since it isn’t Geneva Seal-certified. And then there’s the question of why a manufacturer like Vacheron Constantin couldn’t just recycle one of its basic automatic movements like the Calibre 5100 (used in the Overseas). Was the image of the brand worth compromising for a little bit of cost-saving? These are all important questions that enthusiasts of the brand would love answers to, but we digress.

Back to the specifications. The 142-part, 25-jewel Calibre 1326 is a self-winding (it’s in the name) movement, like the other two members of the FiftySix family; this is actually intentional because the Ref. 6073 which inspired the collection was one of the first watches from the manufacture to be equipped with an automatic movement. The Calibre 1326, which operates at a modern 4 Hz beat rate, is wound by a 22K gold central rotor and possesses 48 hours of power reserve.

The finishing standard applied to the Calibre 1326 is lower than what is usually seen in an in-house Vacheron Constantin movement but still as good as – if not better than – what most luxury watch manufacturers come up with. The usual finishing and decorative touches such as Geneva waves, anglage, perlage, circular graining, and mirror polishing can be seen through the sapphire crystal case back. The rotor bears an openworked Maltese Cross applique and is adorned with multiple types of finishing, including frosting, polishing, and straight graining. Overall, the movement looks attractive, but not to the usual extent of an in-house calibre, either due to less detailed hand-finishing, or an appreciable increase in machine-finishing; we suspect it’s a bit of both. The Calibre 1326 is manufactured by Manufacture Horlogère ValFleurier but finished by Vacheron Constantin.

The FiftySix Self-Winding is officially the least expensive timepiece in the current Vacheron Constantin catalogue. The price of entry? SGD16,900 (or USD11,700) for the stainless steel version, SGD28,200 (or USD19,400) for the rose gold version. It is clear that the FiftySix Self-Winding is aimed at a younger (less financially enriched) crowd, not just with its design, but also its pricing. A ‘fee’ of SGD16,900 to join the Vacheron Constantin club sounds like a value proposition – but is it really? With an outsourced movement that isn’t Geneva Seal worthy and finishing that is inferior to an actual in-house Vacheron Constantin movement, is SGD16,900 for a steel, date-only watch a good deal? It feels as if the brand is compromising its values and prestige for the sake of sales, something that has left a bad taste in the mouths of its current community members. The Fifty Six Self-Winding is the current Vacheron Constantin catalogue’s most affordable timepiece.

Perhaps the grand dame of watchmaking should take a leaf out of the book of the grande maison. Jaeger-LeCoultre’s new Master Control Date serves as an entry-level model for the brand, but unlike the FiftySix Self-Winding it was very well-received. The watch features a vintage-inspired sector dial design with multiple finishes and pleasing blue accents. The date display, with a black frame and blue numerals, looks at home in the Master Control Date. The piece seals the deal with skeletonised syringe hands, which are crafted in blued steel. The movement powering the watch is the automatic in-house Calibre 899/1, which is also used in other Master timepieces like the Master Ultra Thin Date. While the Master Control Date has a more cohesive design than the FiftySix Self-Winding, its movement is obviously finished a level beneath Vacheron Constantin’s Calibre 1326. The Calibre 899/1 still looks attractive but compared to Jaeger-LeCoultre’s higher end movements, there is a lot less hand-finishing. Nevertheless, this brings us to pricing; at USD5,700, the Master Control Date is 10% more affordable than the predecessor reference that it has replaced, and less than 50% the price of the FiftySix Self-Winding in stainless steel. In our eyes, the watch represents good value. Sure, the movement isn’t as beautiful as the Vacheron Constantin’s, but at least it is Jaeger-LeCoultre through and through, both in terms of identity, reliability, and precision – something that no real watch enthusiast can truly complain about. 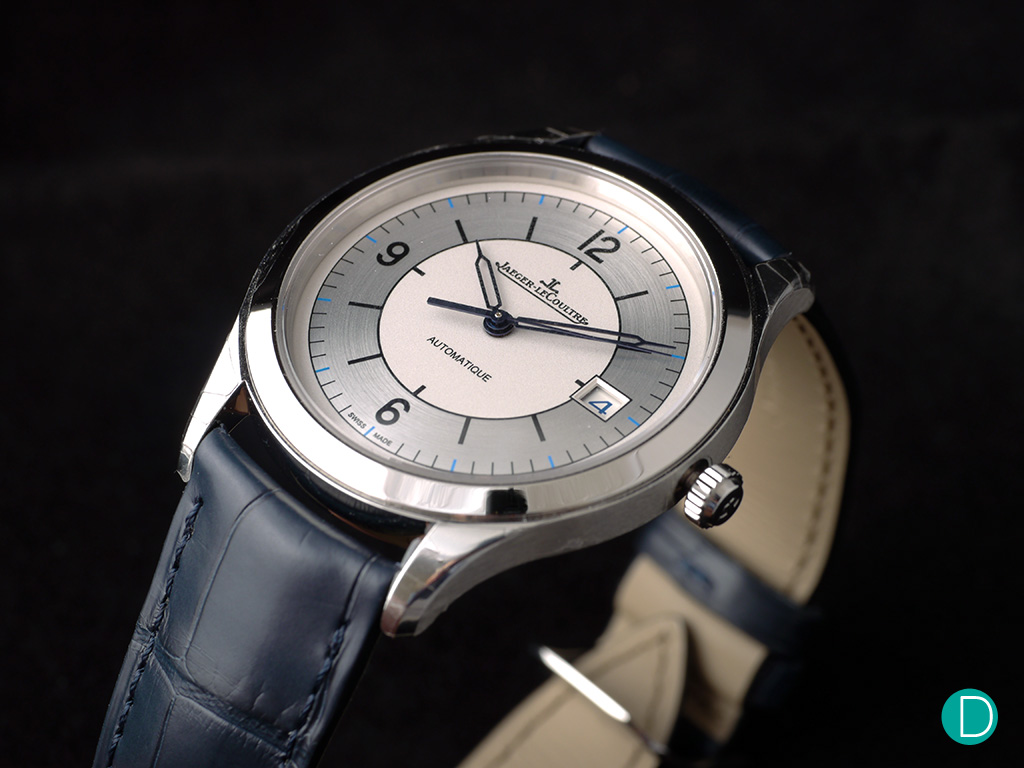 The entirely overhauled design of the Master Control series was a calculated gamble that paid off.

Another exemplary example of what an entry-level piece from a high-end brand should be like is the Saxonia Thin 37 mm by A. Lange & Söhne. Lange’s most affordable timepiece comes in at SGD21,300 or USD14,800 for both pink and white gold variants. This puts it at a lower price than the FiftySix Self-Winding in rose gold. Remember, though, that the Saxonia Thin 37 mm has neither a date nor a seconds function, and isn’t an automatic watch. “That should explain the lower price”, we hear you say. But there’s a reason why the watch has been touted the best timepiece under USD15,000: finishing. You’ve probably heard it a thousand times already by now, but it bears mentioning that Lange watches do have the best finishing amongst the mainstream high-end brands. And the best part is, they apply the same excellent standard of finishing across the board, from the ‘humble’ Saxonia Thin 37 mm, up to the 6-piece limited edition Grand Complication. Inside the Saxonia Thin 37 mm is the in-house Calibre L093.1. It is an old (by Lange standards) and simple movement, but finished to a higher level than most Geneva Seal movements, Lange-style. And indeed, finishing at this level doesn’t come cheap, sometimes incurring up to a third of the watch’s cost. Bottom line is, with the Saxonia Thin 37 mm, Lange have shown that they uphold the brand ethos first, and all else second. In our humble opinion, this is how Vacheron Constantin should have conducted itself, given that both brands sit in the same price bracket (i.e. the highest one). Is the Saxonia Thin 37 mm the most finely crafted watch under USD15,000? It most definitely is.

With the introduction of yet another new collection – and with it a base model that isn’t even Geneva Seal worthy – is Vacheron Constantin diluting its identity? Many seem to think so. Or is this a necessary evil to stay afloat in the unforgiving luxury watch market, where many have gone bust? Only time will tell.