Tudor continues to grow from strength to strength. Coming out of the shadows of her famous elder sister, Rolex, she continues to blossom. No longer are the watches watered down Rolexes. They are now full collections on their own right. The Pelagos remains a best seller. As is the Black Bay collection. And the other lines like the North Flag, the Heritage Chrono, continues to fly the Tudor flag. But this review is of the Editor’s Choice – the Tudor Black Bay Bronze. Tudor Black Bay Bronze. The watch comes with a antiqued calf strap as well as a nylon NATO strap inspired by straps used by the French Navy for their rescue parachutes.

One more time, with feeling!

Recommended reading: our thought piece on The Bronze Debate.

Bronze. A material once considered not suitable for watch cases, as it tarnishes easily. Bronze is an alloy comprised of primarily copper and another metal, usually tin, which yields the alloy known as CuSn8. CuSn8 is commonly regarded as the industry standard, primarily because it’s a marine grade alloy. Bronze can also be made with copper and metals like aluminium, manganese, nickel or zinc and sometimes non-metals or metalloids such as arsenic, phosphorus or silicon.

Bronzes are generally about 10 percent denser than steel, although alloys using aluminium or silicon may be slightly less dense. Bronzes are softer and weaker than steel. Bronze resists corrosion (especially seawater corrosion) and metal fatigue more than steel and is a better conductor of heat and electricity than most steels. Typically bronze only oxidizes superficially; once a copper oxide (eventually becoming copper carbonate) layer is formed, the underlying metal is protected from further corrosion. However, if copper chlorides are formed, a corrosion-mode called “bronze disease” will eventually completely destroy it. Copper chloride can be easily identified by its characteristic green color. But as it is a metal which is suitable for prolonged use under salt water, it is an ideal material for diving. As can be seen in many diving apparatus like bell helmets which are made of bronze.

The first watch case to be constructed from bronze is probably the Gerald Genta Gefica in 1995. We are not clear what bronze alloy was used, but the Gefica had a titanium inner case to protect the movement.

The Gefica is a slightly bizzare looking watch, its round case is fitted with what looked like rivets around its sides and the crown. Genta had not intended the Gefica to be used for diving, and fully intended for the case to tarnish into a (then) weird patina. The patina of some of the vintage Geficas we examined sometimes were so well tarnished that it is at the verge of corrosion, often with the green copper chloride deposits in the corners.

But the Bronze Age for watches did not come to fruition until Panerai introduced its PAM 382 Luminor 1950 Submersible, a.k.a. Bronzo in 2011. Suddenly the collector communities and the Paneristis fora were ablaze with excitement. The first generation was almost immediately sold out. And soon pieces were traded at a huge premium. This was followed in 2013 by the PAM 507, also in the Luminor 1950 Submersible case, but now with a power reserve indicator. Panerai made their Bronzo in CuSn8, and the cases soon began to patina. Each patina is unique, telling the story of the watch and its adventures with the owner. Very appealing.

Then came the rest of the bronze crowd. IWC introduced an experimental bronze Aquatimer in 2014. And Zenith with their Pilot Type 20 Extra Special Bronze in 2015. And now the Tudor Black Bay Bronze. The case is it! And the bronze Tudor chose is copper-aluminium bronze. It will develop its patina a bit more slowly, but more evenly than the equivalent copper-tin bronze. It remains to be seen if the patina is more individual or more beautiful than those developed with copper-tin bronze. We have examined a 3 week old Tudor Black Bronze case at the Tudor booth in Baselworld 2016, and it certainly looks very even in patina.

The case is slightly larger than the regular Black Bay cases, measuring some 43mm in diameter. This is provide better structural rigidity to the bronze case, which as referenced above is softer and weaker than steel.

The case design is beautiful, lines flowing nicely, and creating a very harmonious aesthetic. The design reflects the characteristics from Tudor’s history. The domed crystal, and a dial which is a good tribute to Tudor’s vintage diving watches. The Big Crown embossed with the Tudor rose. Also visible is the drilled holes for the lug pins.

The Tudor logo of a rose, which was present on the dial in the earlier Black Bay watches is deleted, and replaced with the Tudor shield. The rose remains embossed on the side of the Big Crown. Drilled holes on the side of the lugs, which is another characteristic from vintage models are brought back, as are chamfered sides of the case.

Hands are what is known as snowflake, and make the watch highly legible in light and in the dark. The case of the Black Bay Bronze is sturdy, with design cues taken from vintage Tudor diving watches.

The watch will be delivered with two straps. One in nylon, which is a NATO strap, inspired by a vintage found Tudor Diver originally issued to the French Navy. The watch was found with a self made strap from the strap used by the Navy’s Rescue Parachutes. The Black Bay Bronze’s NATO strap carries the same motif and is inspired by this strap. It also comes with a vintage looking calf strap, with a characteristic weathered look. 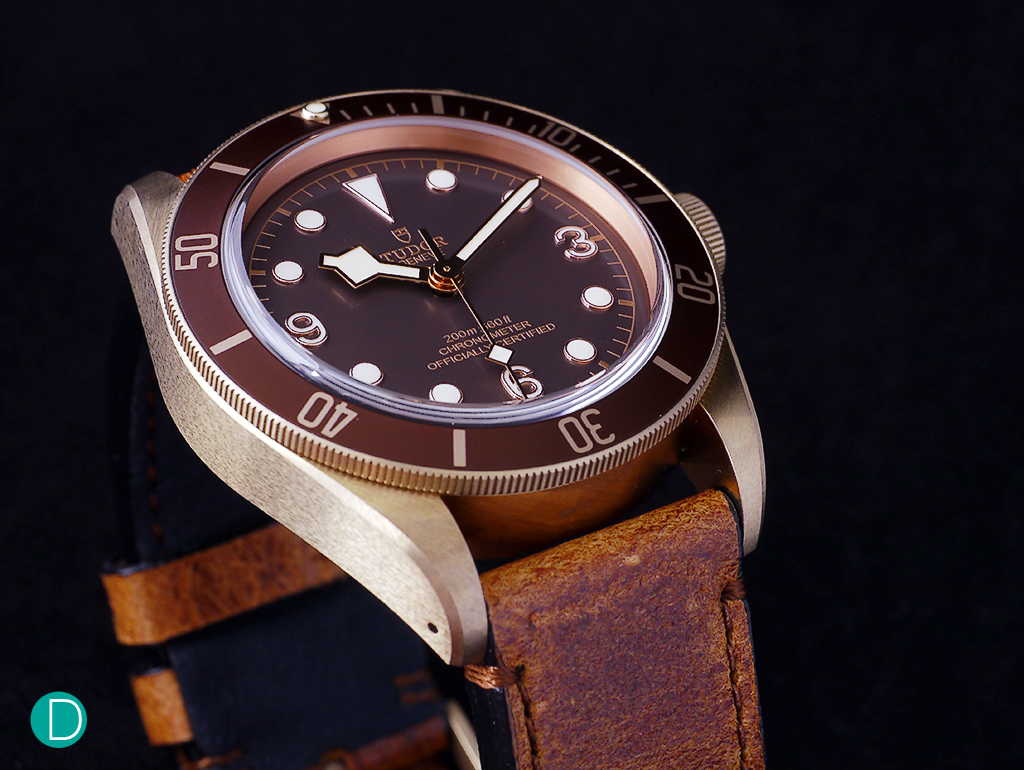 In the vintage calf strap, the Black Bay Bronze has an antique feel to it. The movement ticking inside the Black Bay Bronze is the MT5601, in which “MT” stands for “Manufacture Tudor”.

In 2015, Tudor announced the first mechanical movement in its history to have been developed, manufactured and assembled in-house. This was used in the Pelagos as MT5612, and as the MT5621 used in the North Flag. All are variants off the same base movement. The MT5601 (by virtue of its nomenclature being 01, is probably the base movement) is slightly larger in diameter, and displays hours, minutes and seconds. This is interesting, as Tudor seems to be encasing a special version of the movement in every variant of the watch. The regular Black Bay (Red, Blue and Black) will be upgraded from the ETA 2824 to the MT5602, the same movement as will be used in the new Black Bay Dark. But as the Bronze case is larger than the regular Black Bays by 2mm, it gets a new variant of the movement. Bravo and kudos to Tudor for not inserting a small movement in a large case, just to save cost.

The movement is proven itself to have high precision and robust in the Pelagos and North Flag. The movement offers a 70-hour power reserve meaning that its wearer can, for example, take off the watch on Friday evening and put it on again on Monday morning without having to wind it. Beating to a frequency of 28,800 bph, the movement is regulated by a variable inertia oscillator with silicon balance spring, held in place by a traversing bridge – a guarantee of its robustness. And is certified by the Swiss Official Chronometer Testing Institute (COSC).

All in, a magnificent effort by the Tudor team. Well thought out, with cues taken from Tudor’s own vintage Diver Watches, and nicely executed. The small touches like the use of copper aluminium bronze is a tiny, but technical detail to make it stand out from the crop of other bronze watches.

Aesthetically, it is a real winner. From the snowflake hands, the domed crystal, the sculptured case, and the warmth of the bronze, it remains quiet, yet screams vintage and class. The rust colored combination, either the NATO strap or the vintage calf strap is beautiful, and will match well with the usual gentleman’s accoutrements like brown shoes and other leather accessories. The Black Bay Bronze looking regal on the author’s wrist, with bespoke shirt and suit.