Patek Philippe releases a rare combination of two of their popular specialities – the world timer, and the chronograph. This was last seen in a single piece from the 1940s. And for Baselworld, they unleashed the Patek Philippe World Time Chronograph 5930, it makes our Editor’s Choice. First off, we love the case size. 39.5mm diameter is just perfect. The case height of only 12.86mm is also quite impressive, considering that the watch houses a full sized rotor for automatic winding, a vertical clutch column wheel chronograph, and a world time module. Patek told us that they are particularly proud of the thickness (or thinness) of the case, and had to specially configure the elements to ensure this. And they did.

The case design is rather masculine, with the case itself being cylindrical, and the smooth bezel at an angle. The lugs are soldered and make a beautiful sweeping gesture. Patek calls the lugs “winglet styled”, and are a reflection of the design typical of the 1940s and 1950s World Time watches. The case is beautifully finished, and the chronograph buttons get two kinds of finishing. 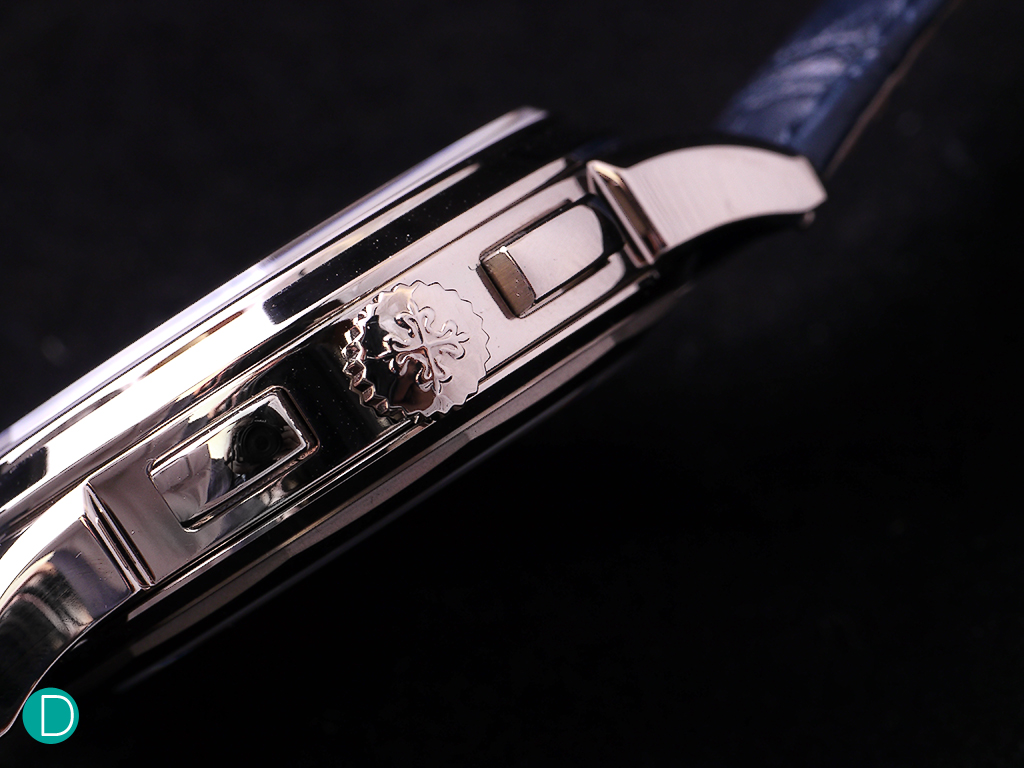 The chronograph buttons on the 5930: featuring a high gloss polish finish for the push part, and brushed on the sides. As usual, the crown bears the Calatrava Cross.

The pusher for the World Time is at 10 o’clock, and each click on the pusher advances the world time zone by 1 hour. It is also made in the same rectangular fashion as the chronograph buttons.

The dial is magnificent. The blue hue is captivating, and a joy to gaze at. The design elements of such a complicated dial is well executed, and it looks harmonious and not cluttered. 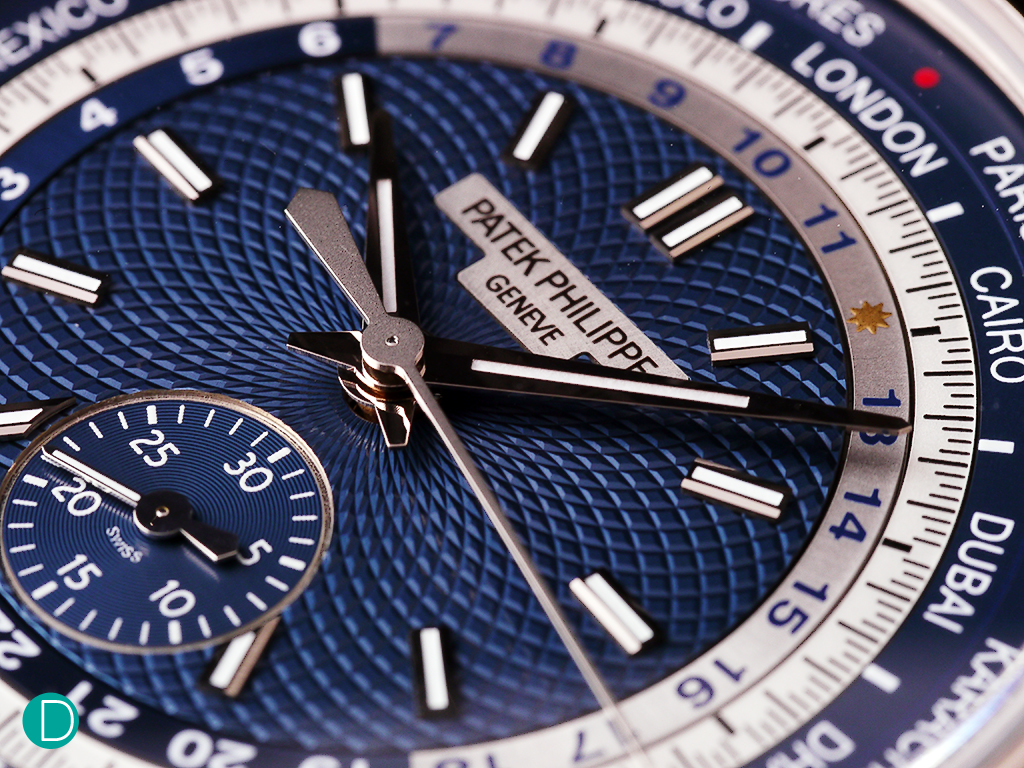 The two complications are very nicely integrated for display on the dial. The outermost display element in blue lists the 24 city names that each represent a time zone. Interestingly, Patek is using new cities for the time zones, for instance Dubai instead of Riyadh and Brisbane instead of Nouméa and takes into account the fact that Moscow changed its local time from UTC+4 to UTC+3.

A small ring lies between the city disk and the 24 hour ring and is used for the scale for the chronograph. A white circular scale with fourth of a second graduations. This graduations reflect the movement’s frequency of 28,800 bph, and allows an accuracy of one-eighth of a second.

Continuing inwards, a white 24 hour ring rotates continuously counterclockwise, and doubles as a day/night indicator. The center of the dial is a guilloché medallion, and designed along the lines of the vintage World Time watches that Patek used to make, like the Ref. 1415 HU, which the Ref. 5930 takes its aesthetic cues from. The 18k white gold markers and the 30 minute chronograph counter punctuate the guilloché. The subdial stands out with a thin gold surround, framing it, and the white minute scale is finished with circular graining. The movement is rather interesting. The classic World Time watch does not have a seconds hand. But classic chronographs have a long trotteuse (center chronograph seconds hands), and a 30 minute counter. Traditional chronographs feature a scale graduated in fractions of a seconds, and the world timer needs a moving scale showing 24 hours. These are some of the challenges for the design of this new movement. Add to that, the specification that it must be the thinnest and most elegant solution and be self winding as well. It is important not to compromise precision and robustness when making a movement too thin, and it is apparent that Patek has taken great pains to ensure that there are no compromises, given these design goals. The new World Time Chronograph 5930 meets to Patek Philippe Seal levels.

The movement is based on the tested Patek CH 28-250 PS chronograph caliber, controlled by a vertical clutch system. And the World Time module based on a concept by Genevan watchmaker Louis Cottier in the 1930s. Patek has optimized this solution and had some important refinements patented.

In order to fit both complications to the base caliber (already measuring some 4.1mm in height), Patek had to make extensive modifications. Patek press release says, “Axes were shifted, bridges thinned and newly designed, and component clearances changed such that the caliber CH 28-520 HU can legitimately be called a new movement.”

The world time function is easy to use, as it is based on the Cottier system. A corrector button at 10 o’clock advances the city disk and the 24 hour ring counterclockwise in one hour increments. The correction is complete when the city name of the local time is at 12 o’clock. During this process, the World Time mechanism and the hour hand is decoupled from the movement, so that the amplitude of the balance is not affected. The other side benefit is that the minute hand continues on its progression and remain unaffected. 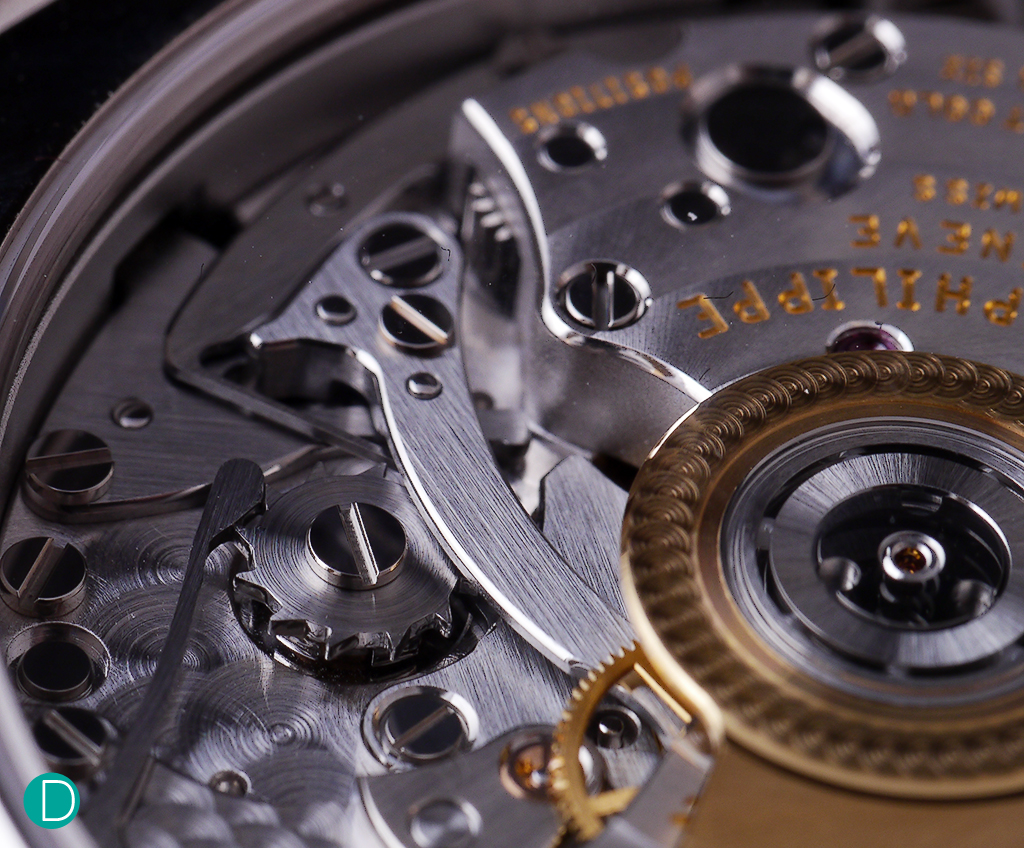 Movement finish is to the very high level demanded by clients, and in accordance to the Patek Philippe Seal.

Movement finish is typical Patek Philippe standard. All the standard and traditional finnisage details are executed very well. The anglage, polished contersinks, circular Côtes de Genève, perlage and gold filled engravings are all at a level which Patek can be proud.  The jewels are of note, and are beautiful. As is the golden hue of the Gyromax® balance, and the purple-blue shimmer of the patented Spiromax® balance spring in Silinvar®; with its Patek Philippe terminal curve. The rotor, being full sized is in gold, and engraved with the Calatrava logo.

We may have a nit or two to pick about the movement design and layout, but the finishing is top notch. For example, we would have prefered if Patek had taken the trouble to make inward and outward angles with the bridges, to showcase virtuosity in executing the sharp angles. We might have wished for a micro-rotor movement to be used as a base, to allow more of the movement to be seen. Also, the chronograph works seem to be between the movement and the dial, and the sapphire glass shows the world time movement. We would have thought the chronograph works, with the gleaming levers and column wheel might be a more exciting visual treat.

The Patek Philippe 5930 satisfies in many ways. The design of the case, dial and hands are well done. The result of the combination of both chronograph and world time functions…does no clutter the dial, but retains an elegance and legibility. The movement is also remarkable for the combination of complications, and the final package in a case of only 39.5mm diameter with a thickness of 12.6mm is admirable. It sits beautifully, and unobtrusively on the wrist…discrete and elegant. 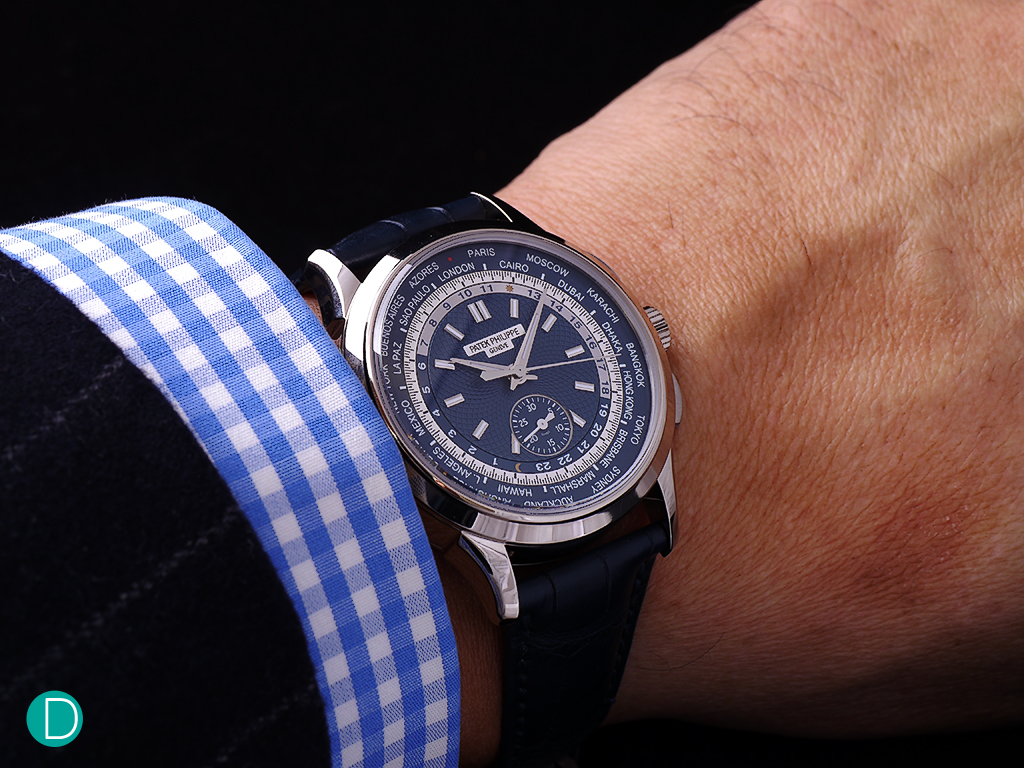 On the wrist, the Patek Philippe World Time Chronograph 5930 is elegant, and sits beautifully.

We looked around for similarly packaged complications in the competition. And found only a few, and none which are direct competitors. The other world time chronographs all hail from a different universe. Lineage, provenance, attention to detail, prestige, design are not even close enough to the Patek 5930 to warrant a serious comparison.

But for the sake of completeness, we consider these watches with the same complications.  The Zenith Doublematic Worldtimer  (US$13,200 in rose gold) uses the El Primero as the chronograph base for a world time module Zenith developed for this watch. It lacks the ingeneous Cottier system, and the chronograph is not flyback. The El Primero is certainly a workhorse movement, but pales in comparison to the more elegant, and better finished CH 28-520 HU.  Girard Perregaux have several offerings with the same complication combination. The Girard Perregaux WW-TC (€33,000, approx US$37,200 for white gold) is one of them. The case is much bulkier, measuring some 44mm. The case is elegant, but much bulkier. The movement is based on the GP3100 with chronograph and world time module added. Finishing is quite good, but not the same level as Patek Philippe. The other traditional Patek rivals – Vacheron Constantin and Lange do not offer this complication combination. 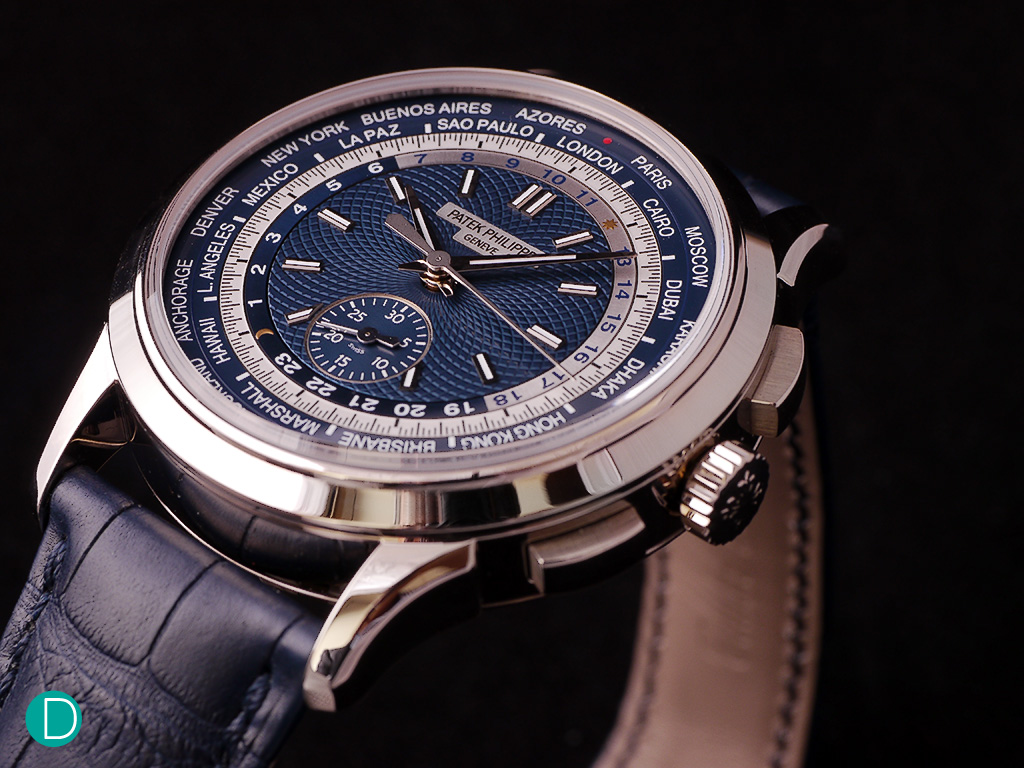 So for us, the Patek Philippe World Time Chronograph 5930 is quite magnificent. It combines the complications in a neat package, small, discrete, elegant. The finishing is typical Patek quality. The pricing seems to be quite reasonable, if such a case can be made for a watch retailing for three quarters of a hundred grand (US Dollars). As a comparison, the Patek 5170 (chronograph only) in white gold, handwound retails for US$87,000.

Prospects of a high resale value is likely to be better than most, particularly as there appears to be little competition at the haute hologerie arena for this complications combination. It gets our Editor’s Choice as Top 5 Watches from Baselworld 2016.