The Longines Legend Diver, since its inception in 2013, has been one of the biggest hits from the Switzerland-based watch manufacturer. The watch is part of the brand’s popular Heritage collection, which draws its inspiration from its archives of more than 185 years. This year, Longines had taken it up a notch – with the new Skin Diver Watch.

The Skin Diver is Longines’ first diver watch. First launched in 1959, the Skin Diver offers users a sleek tool watch that is both functional and stunning. It was only produced for around two short years, before it was succeeded by the Legend Diver.

Recently, in Baselworld 2018, Longines expanded its Heritage collection and relaunched the Skin Diver. The timepiece is a homage to the brand’s first diver watch, and we reckon that it is a fitting tribute to one of the most important watches in Longines’ history. The Longines Skin Diver – a fitting tribute to the original version.

The idea of the Skin Diver is to pay homage to the original version – and Longines had done a brilliant job in the execution of their latest piece. The 42mm watch has a number of vintage and aged touches to it, and making the watch seems older than what it actually is. In fact, this is probably how the watch would have look like, if it had aged gracefully and survived till today. However, due to the original piece’s short production period, we reckon that the chances of seeing the 1959 version is close to nought. A close-up of the Longines Skin Diver.

We begin with one of the most conspicuous elements of the watch: the watch’s dial. The grained black dial is a reminiscent of the Skin Diver of the yesteryears – with its faux-patina indices and the use of classic fonts. In addition, the hands with the faux patina also complements the vintage feel of the timepiece. Its intended effect is to replicate the ageing of the tritium that was applied on the dial, without the need of the ageing process and the use of the bio-hazardous material. These different elements bring a neat touch, and the romantic side of us was sold by how stunning the watch turned out. The Skin Diver is a stunning piece – with a very nice vintage touch to it.

The stainless steel watch is contrasted with a black uni-directional rotating PVD bezel. The bezel is a replication of the original version, and it gives the watch an interesting aesthetic. To top it off, the watch is fitted with a domed sapphire crystal, to highlight its vintage feel. The caseback of the Skin Diver is solid, but it features an embossed diver symbol.

The Skin Diver is fitted with an ETA-based movement. The self-winding engine beats at 25,200 bph, and it boasts a decent power reserve of approximately 64 hours. This is notably the improved version of the ETA 2892 movement that it is based on, in which the latter has a lower power reserve of around 42 hours.

The watch is fitted with a solid case back, hence we have no clue as to the level of finishing of the movement. Based on its price point and our observations on the other models, we reckon that the finishing of the Calibre L888.2 should be typical with most of the other mass-produced entry-level watches – nothing out of the world, but mostly industrial-grade refinement. For its price point, we think that it is reasonable. The Skin Diver is undoubtedly a stunning piece. 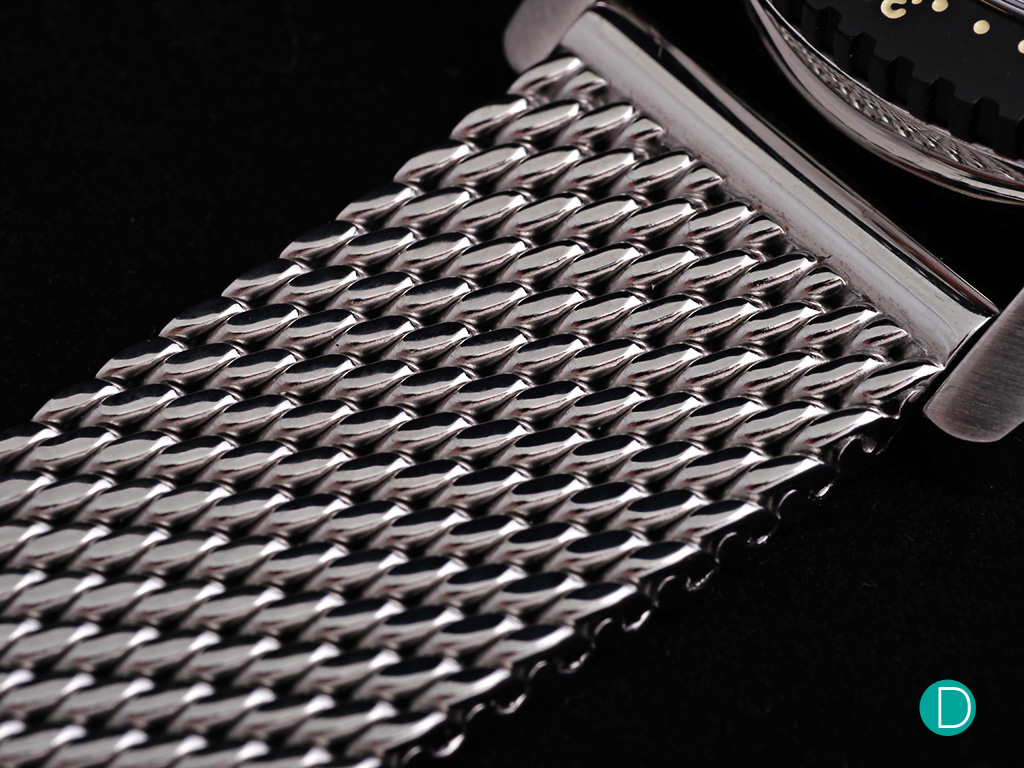 The Milanese-style steel bracelet on the Longines Skin Diver.

Each of it brings out a different style of the watch, although we personally feel that the brown leather strap would both complement the aged indices and accentuates the vintage feel of the piece. Prices for the watch begins at US$2,600 (approximately S$3,584).

One of the closest competitors for the Longines, in our opinion, is the Oris Divers Sixty-Five collection. Similar to the Skin Diver, the Divers Sixty-Five collection pays homage to their diver’s watch that was launched in the 1960s. There are many iterations of the Divers Sixty-Five, which includes the Carl Brashear Limited Edition. The base model, however, is priced rather modestly at CHF 1,850 (approximately S$2,558). It is fitted with a Sellita SW-200 movement, with a date display and a power reserve of around 38 hours. The lower price point certainly gives the Skin Diver a run for its money. Moving on, we have the Tudor Black Bay. Tudor has been making waves since its turnaround in the past few years, and the Black Bay is certainly one of the most popular pieces in the collection. Similarly, there are many iterations of the Black Bay, which includes the new “Pepsi” GMT model. The price for the base Black Bay model is S$4,608, but that is due to the fact that the watch is fitted with an in-house chronometer-certified movement with a respectable power reserve of 70 hours. 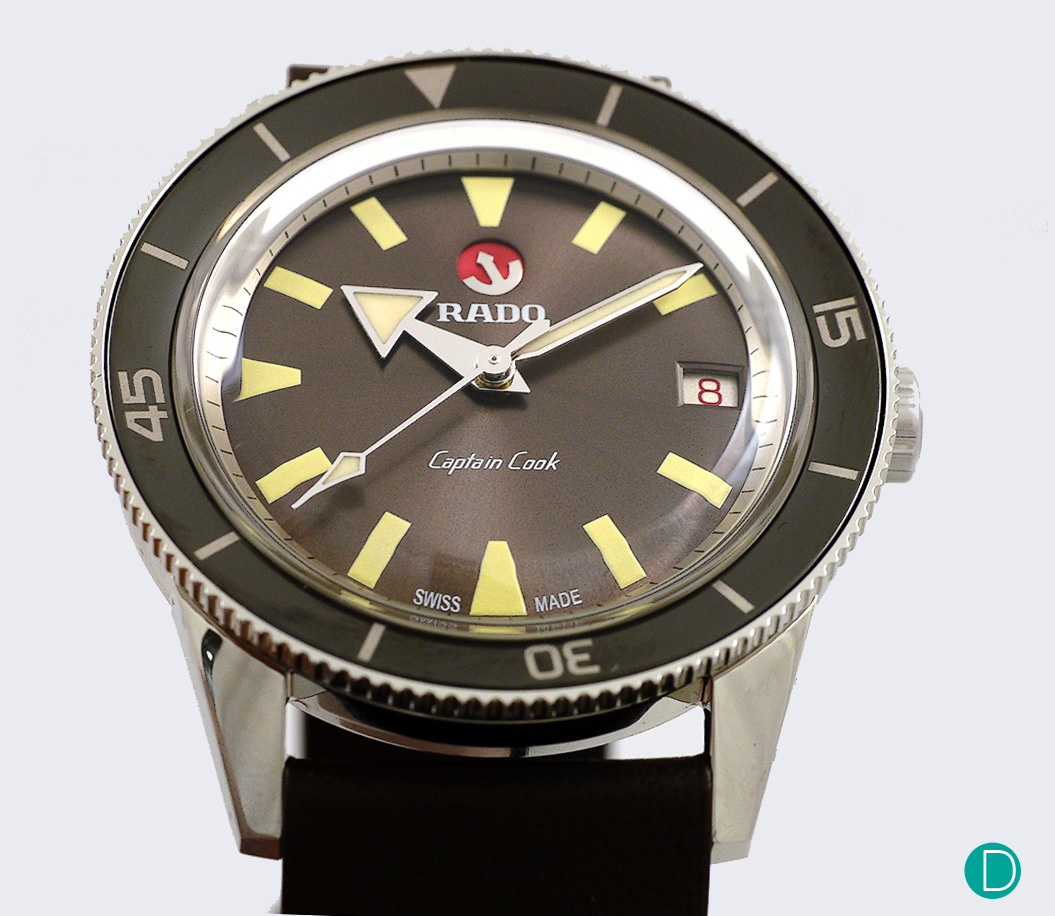 Finally, the last piece on the comparison list is the Rado Hyperchrome Captain Cook. Rado is a brand that is often overlooked by many, but we reckon the Hyperchrome Captain Cook is one of the nicest vintage-inspired diver’s watches that we have seen in recent times. What we particularly like about this piece is the fact that it is 37.3mm in size, and that its ETA movement boasts a compelling power reserve of around 80 hours. In addition, there is a very strong vintage vibes from the watch. It is priced at S$2,530, and it is limited to a production run of 1,962 pieces. 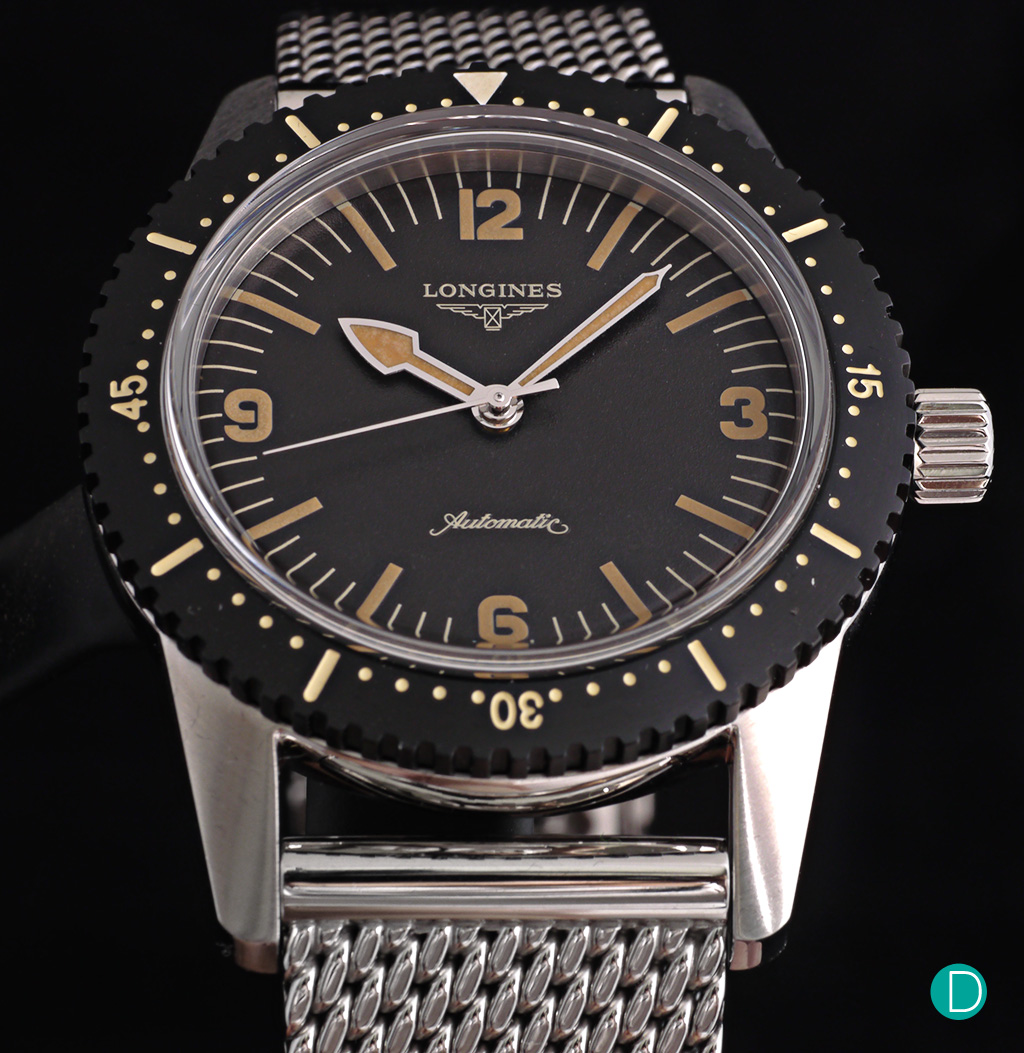 The Skin Diver, fitted with a Milanese steel bracelet.

Longines have often produced interesting pieces for its Heritage collection, and the Skin Diver is no exception either. Following the success of the Legend Diver, we reckon that the Skin Diver – with its vintage touches – will be another piece that will attract the attention of many collectors. The fact that it is faithful to its original version, which includes the absence of the date window, makes it even more compelling for us.

Its price point is also attractive, but it has some serious competition as well. As we have highlighted above, there are some watches that are equally as capable as well, each with a different price points and certain trade-offs in one way or another. The Skin Diver seems to have the best of both worlds – in terms of performance and value proposition. It is, however, not the cheapest entry-level luxury brand with a vintage-inspired timepiece, but it makes up for the premium with its movement and perhaps branding as well.

What are your thoughts on the Skin Diver? Will it be as popular as the Legend Diver? Let us know in the comments section below.