Continuing on our full hands-on analysis reviews of the Editor’s Choice, we come to the Parmigiani Fleurier Tonda Chronor Anniversaire, a technical speciality to showcase virtuoso ability – the split seconds chronograph.

The Chronograph: a perspective

The chronograph is often overlooked by collectors as an inexpensive complication. However, in reality, a new chronograph, designed from ground up, and adjusted to the precision required for reliable operations demands a high level of technical sophistication. Many watchmakers tell us that a well designed and well adjusted chronograph is a more demanding task than a well designed and adjusted tourbillon. The tourbillon often carries with it the aura of technical virtuosity and commands a price accordingly. But the chronograph is somewhat the ugly step sister, though can be technically more demanding, often is not able to command as high a premium.

This is probably due to the fact that the chronograph is a useful complication, and in high demand. This led to the early industrialization of the chronograph through simplification of the classical column wheel into an inexpensive to manufacture cam actuated industrial version. The cam version is made ubiquitious with the Valjoux 7750 and Lemaia 5100 in the late 1990s. Or the Dubuis Depraz modules strapped on standard base movements as non-integrated chronograph designs. These movements can be robust, and reliable (the Valjoux and Lemania indeed are very robust and reliable), but are not the the same precision instruments as their classical column wheel controlled cousins.

To date, most industrialized chronographs remain cam actuated. The prospect of an industrialized, low cost column wheel chronograph is within sight with the appearance of variants in the ETA manufactured Longines Caliber L788.2 found in Longines Pulsometer, or the house manafuctured Montblanc Caliber MB LL100.1 used in the Montblanc 4810 Twinfly Chronograph. Another candidate, albeit at a higher price point, might be the Rolex Caliber 4130 in the Rolex Daytona Cosmograph. However, none of these offer haute horologeie finishing.

Step up to a split seconds chronograph, or rattrapante in French, the pickings become more rarified and prices soar. The mighty Lange Double Split remains a strong candidate. As does the Patek Philippe 5370 and the Vacheron Constantin Harmony Ultra Thin Grande Complication Chronography. And now the Parmigiani PF361 found in the new Tonda Chronor Anniversaire.

“Since the very start of our watchmaking adventure, the idea of creating an integrated Chronograph has always been close to my heart. This dream became a reality on the eve of our 20th anniversary, and this is no coincidence – it is a reflection of our development as a manufacture. To successfully create an integrated chronograph, one must first master its imposing, meticulous assembly of constituent parts; not just their manufacture, but also their operation and function at the heart of a calibre; one must appreciate both their limits and potential. For this reason, an integrated chronograph is necessarily the work of an experienced manufacture. The Tonda Chronor Anniversaire is a reflection of 20 years of work.” 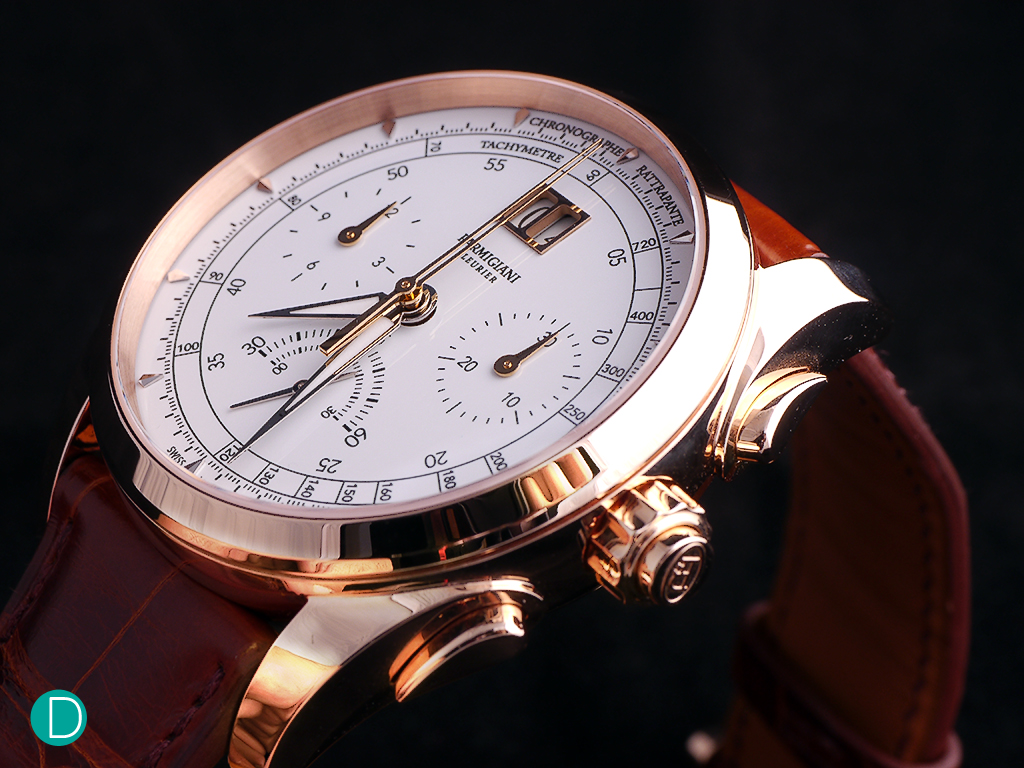 Parmigiani Fleurier Tonda Chronor Anniversaire in rose gold, with “grend feu’ enamel white dial. We are quire taken by the magnificent “Bleu Roi” version, but were not able to photograph it during the SIHH.

The case, dial and hands are designed in classical Parmigiani style. The aesthetics are eloquently prescribed by Michel Parmigiani himself. The curved lines are sensuous, creating an impression of smooth flowing, relaxed beauty. The proportions are near perfect. The sensuous curves of the lugs meets the beautifully designed and executed case. The case is manufactured “in-house” by Parmigiani owned Les Artisans Boîtiers.

The grand feu white dial, which we show here in our high resolution photographs appear to be flawless with a luminous texture, and on its own quite beautiful. Dial detail of the white enamel dial on the Tonda Chronor Anniversaire.

But we do find the lack of circles around the sub-dials a bit unusual, resulting in the dial looking bare. It gives an impression of these counters hanging in space and a sense that the dial is perhaps incomplete. This feeling of emptiness we get when when looking at the dial is amplified by the fact that the seconds markers on the outer track are anchored by a circle, and the tachymeter markings themselves are within a railway track. We would have preferred either a circle, or the more complicated but traditional sub-dials which are slightly sunken to a different level from the main. Perhaps this may be seen as the only cost cutting that Parmigiani has implemented on this watch, and for us is disappointing. Especially so when the dials are made within the group by dial specialist Quadrance et Habillage (owned by Parmigiani).

The bleu roi, royal blue, though still suffering from the same lack of definition for the sub dials, gets more character from its deep blue color. It appears different on different light and angles, turning from a brilliant almost electric blue to a dark purple. The PF Caliber 361: beautifully designed, laid out and executed in rose gold. Note Michel Parmigiani’s signature on the mainspring barrel for the Anniversaire edition.

The PF361 in the Tonda Chronor Anniversaire is magnificent. A masterpiece. Running at 36,000 bph is quite a feat for a split seconds chronograph which has a power reserve of 50 hours. The precision offered by the higher beat is undeniable. The chronograph can measure steps of up to 1/10th of a second, and the fluidity of the hands are quite mesmerizing to observe. Most chronographs, especially those running at the traditional and classical 18,000 bph will exhibit staccato effects which can be observed on the chronograph hands. The double column wheels. The main column wheel is on the left, and controls the main chronograph mechanism. The column wheel on the right is the controller for the rattrapante hand.

The PF361 features double column wheels, as is common in split seconds chronographs. It also uses a vertical clutch system, which is more modern, more complicated to manufacture and tune than the more classical version which uses the horizontal clutch. The vertical clutch enables the chronograph to start immediately without the characteristic jump of the horizontal clutch system as it engages. Interestingly, the balance is secured by a full bridge instead of a cock. The bridge arrangement is technically more stable than a cock, although in practical terms, this additional stability is not measurable, and almost all balance cocks functional in an identical manner as a balance bridge, aesthetics aside.

The PF361 also features a large date, with double disc displays. This arrangement is not unusual, as the Lange Datograph already incorporates a similar mechanism at its introduction in 1999. However, traditional chronographs are often designed sans date display. The overall look is cleaner, and the seemingly disparate displays of the date which changes once a day, and the chronograph hand and totalizers which are visually more active is perhaps one other reason. For the record, we think the Tonda Chronor Anniversaire’s large double date looks just fine, and seem harmonious with the rest of the dial.

The movement plates and bridges are also crafted in gold. According to Parmigiani, working with a gold movement presents additional manufacturing challenges as gold sticks to tools. Gold is malleable and easily deforms, and all machines used in its manufacture need to be recalibrated.

The movement layout is magnificent. It is beautiful, aesthetically pleasing and well executed. The finishing is at the highest levels of technical virtuosity. The PF 361. The layout of the movement is a masterpiece in aesthetics. The execution is also top grade.

Note the bridges are openworked, and through the apertures, one can observe the finishing of the wheel train and column wheels. We particularly like the juxtaposition of the sanblasted finish, the linear graining and the brilliantly anglaged and polished edges on the bridges. And are also very pleased that Parmigiani have chosen not to cut any corners as the bridges incorporate many external and internal angles which are particularly difficult to executed, and can only be done by a skilled hand. The result is the angles on the gold bridge accentuate the light, and is very beautiful to look at. Bravo!

It is no secret that we love this watch. The design, safe the aesthetics on the dial which we already mention, is magnificent. The execution is flawless. We particularly love the movement. The way Parmigiani chose not to cut any corners with the intricate design of the bridges, and the superlative skills they exhibited in its execution is cause for joy. A fitting tribute to the 20th Anniversary of the manufacture.

Competition at this level of design and execution is rarefied. As mentioned integrated split seconds chronographs are rare. And competition is top drawer. The best of the best. The standout features of the Tonda Chronor Anniversaire which are unique are that it is the only one to offer a large date display, the only movement in solid gold, and one which has a high beat, capable of measuring intervals of up to 1/10th of a second.

First we consider the Patek Philippe 5370 Split Seconds Chronograph (US$249,200 in platinum only, non limited edition but like all Pateks are limited production. About S$354,000). The 5370 features a magnificent and very beautiful black grand feu enamel dial. Patek, also does not commit any design faus pas, so the design remains elegant and beautiful. Aesthetically it retains the Patek Philippe character of being a timeless design. In addition, the mystique and aura of the Patek Philippe name stands in its good stead.

Another comparison is to the Lange Double Split (S$168,200 in gold, non limited edition, and like all Langes are limited production). Interestingly, the Lange is forced to omit its signature outsized date in favor of a power reserve indicator on the Double Split. The Lange dial is traditional massive silver, and not grand feu enamel. The Lange also uses a horizontal clutch mechanism, and although possibly the finest implementation of this clutch, a miniscule jump of the chronograph hand can be observed when starting the chronograph. In Lange’s favor, it is the only chronograph to feature double instantaneously jumping counters for both minute totalizers. All other split seconds chronograph only allow the split second time to lag be split from the main chronograph hand up to 59s, whilst the Double Split enables this split to be up to 30 minutes. The Lange also features a flyback mechanism.

The other obvious comparison is with the Vacheron Constantin Harmony Ultra-Thin Grande Complication Chronograph (US$369,200 in platinum only, limited edition of 10 pieces.. About S$525,600) which features the VC Caliber 3500. The VC also does not an enamel dial. It also utilize the traditional horizontal clutch mechanism. However, the VC’s horizontal clutch uses a special “friction” technique on the lateral coupling clutch to reduce the jerking of the chronograph needle when it is activated. In its favor, the VC’s case and movement is ultra thin and automatic winding. Also, the very limited edition of only 10 pieces is a plus. On the wrist, the 42.1mm diameter with a 146mm high case slips comfortably under the cuffs of the author’s bespoke shirt, although to enable the entire watch to be visible, we show it outside the cuffs.

As an aside, we are curious about Parmigiani Fleurier’s communcations. While they have done a good job at the technical specifications, we are a bit puzzled as to why Parmigiani Fleurier chose to release 25 examples in rose gold, and a further 25 examples in white gold. We would have imagined 20 examples for the 20th Anniversary would be easy to digest, but why 25? It is also not clear how many of each in the two metal case versions will be equipped with the white dial, and how many in blue dial. However, this does not, in any way, take away from the magnificence of the watch, but just a curious observation.