Last year, when we first kick-started the “Throwback Sundays” column, we briefly recommended six timepieces that we think a collector should look at when he or she start collecting watches.

We have selected quite a vast array of watches, and they are mostly priced below SGD$5,000. Some of the watches that were featured include the stylish Swatch Sistem51, to the iconic Omega Speedmaster “Moonwatch”. While we only selected six watches, we think the selections are well-balanced and cover a wide spectrum of style and preferences.

Since then, we think perhaps our collector might like to add a couple more watches into their budding collection. Well for this week’s Throwback Sundays article, we will select yet a further six excellent and affordable watches to add into one’s growing watch collection. The next step, so to speak. These watches, as usual, will cover a wider spectrum of style and functionality. And most importantly, they will be well-priced, at below SGD$10,000. Ever since Jérôme Lambert took over the realm of Montblanc in 2013, the Le Locle and Villaret based watchmaker have been constantly impressing us with a string of affordable and value-for-money timepieces. One of which is the Heritage Spirit Orbis Terrarum, a useful timepiece that features an in-house manufactured world-timer module.

What we particularly like about this watch, aside from its excellent value proposition, is its aesthetics and user-friendliness. The dial, for instance, is constructed in multi-layers to give it some level of depth and clarity. It also looks incredibly detailed and beautiful. Functionally, the second timezone can be easily selected via the pusher at the 8 o’clock pusher. The watch also features a day/ night disc that tells the user whether his or her friends overseas are having breakfast or dinner at a single glance. Nice! 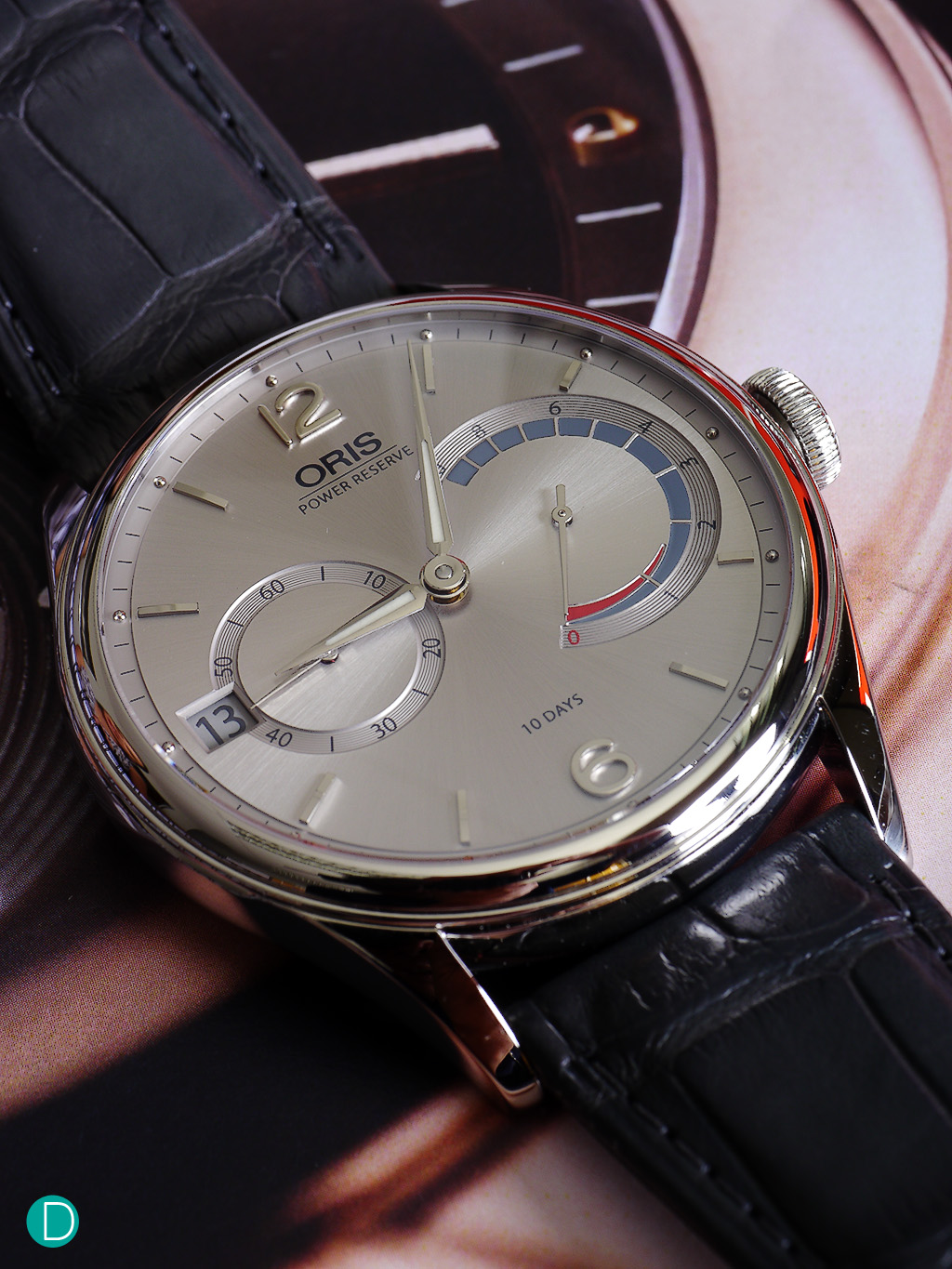 Next up, we have a rather special piece from Oris: the Caliber 111. The Calibre 111 is an updated version of the Caliber 110. Caliber 110 was a special timepiece that was created to commemorate the watchmaker’s 110th Anniversary. That was, incidentally, the first in-house movement that Oris had produced in 35 years.

The highlight of the timepiece, without a doubt, would be its impressive movement. The Caliber 111 has a power reserve of 10 days. What is interesting is that fact that it is achieved with the use of only a single barrel. To achieve this long power reserve, the mainspring is 180cm long. Additionally, the 43mm timepiece also features a non-linear power reserve indicator and the date indicator.

The Oris Caliber 111 is priced at CHF5,300 [SGD$7,400]. Great value pricing, coupled with the 10 day power reserve, and a movement which is quite frankly quite a sight to behold makes it a very strong value proposition. The Chopard Mille Miglia GTS Power Control. A rather pretty sports watch with some motoring pedigree.

We are big fans of Chopard timepieces. Chopard produces some of the nicest movements in the world, and mostly at a fraction of what the other high-end watchmakers are charging. So, when Chopard told us that they were releasing the new Mille Miglia GTS Power Control with an in-house movement, we were naturally excited.

The Mille Miglia, as some might have known, is a line of sports watches in Chopard’s repertoire. The watches, with its racing theme, pay homage to a classic motoring event that is held in Italy. What we particularly like about the Mille Miglia is its aesthetics. And the new GTS Power Control does not disappoint. It features a bold and stylish outlook, but it still remains functional and robust as ever. One particular thing that we really like about this watch is its legibility, and how we are able to read everything off the dial at a single glance. It is somewhat a fanciful timepiece, but it does not compromise on both functionality and legibility. Well done on that.

The Chopard Mille Miglia GTS comes in several variants, with the Power Control retailing at around SGD$8,470. Their other modestly priced version is the Chronograph, which retails at SGD$9,470. These watches are all fitted with an in-house movement, and are all chronometer-certified. This is certainly one for the boys who love their watches and cars. The IWC Pilot’s Watch Mark XVIII. This particular one, with an alluring blue dial, is the “Le Petit Prince” edition.

The IWC Pilot’s range is one collection that attracts both new and seasoned collectors alike for one simple reason: the timepiece is very minimalist, and yet it possesses such wonderful good looks. The Mark Series, in particular, is one of our favorites.

The Mark Series is the entry-level Pilot’s Watch in the IWC family, but it is also certainly one of the most sought-after watches as well. The watches, notably, are based on the aviation watches that IWC had produced for aviators in the past. The latest iteration of the Mark Series is none other than the Mark XVIII, which was launched recently in this year’s SIHH. As usual, the Mark XVIII displays only the time and date. However, for the latest model, it underwent some cosmetic changes. The greatest difference would be the date indicator, in which the “altimeter style” date window is replaced with a single date window. There are other subtle changes that were done to the dial too, such as the placement of the triangle and the inclusion of both the “6” and “9” numerals for the indices. The overall effect is pleasant, and it makes the watch much complete.

The IWC Mark XVIII comes in different bracelet options, such as the leather strap (SGD$6,250) or the stainless steel ‘Beads of Rice” bracelet (SGD$7,650). For those who want something that is a little special, one can perhaps also look at the “Le Petit Prince” or the “Top Gun” versions as well. When one takes a quick look at the new Seiko Marinemaster Professional 1000m Diver’s, one can definitely conclude that this chunky watch certainly means business. Not only does this watch looks imposing, but the brand is certainly known for its reliable and no-nonsense tool watches that have equipped many divers for generations.

Nicknamed the Emperor Tuna for its resemblance to a can of tuna, the Marinemaster Professional features a monobloc titanium case with a ceramic shroud. The combination, together with the black and gold bezel, is rather stunning indeed. In addition, the watch is fitted with Seiko’s Caliber 8L35, an automatic movement that was said to be based on Grand Seiko’s Caliber 9S55.

Priced at EUR3,450 [SGD$5,360], we think that this robust timepiece offers tremendous value proposition. Although some might balk at paying a few grand for a Seiko, but we truly think that this is one timepiece that can match, or even surpass, some of the best tool watches that are produced by the Swiss. The Rolex GMT-Master II. This one is known as the “Coke”, thanks to the color of its bezel.

For a long time, the ownership of a Rolex signifies that someone had achieved a certain level of success. And we think that for a budding collector, this might just perhaps be the appropriate time to join the league of Rolex owners.

Contrary to popular beliefs, a Rolex watch may not necessarily be more expensive than the offerings from other luxury watchmakers. A pre-owned stainless steel sports Rolex, such as the GMT-Master II or the Submariner, is priced conservatively at around the region of SGD$6,000. At that price, we think that these watches offer collectors tremendous value. The GMT-Master II, for instance, is a darn solid and functional tool watch with an interesting provenance. It looks pretty good as well, and its two-color bezel (for the Reference 167X, 167XX models) makes for a livelier visual impact than the likes of the more sober and monochromatic Submariner.

However, the usual caveat emptor applies. The secondary watch market may be a treasure trove for some, but there are potential pitfalls as well. Always do your due diligence, and like what the old timers like to say, “Buy the seller”. If not, you could always pay a slight premium for a brand new watch, or alternatively look at excellent substitutes like the Tudor Pelagos and the Black Bay Black. Either way is fine, and we think that you are still getting a good deal nonetheless.

We hope that you have enjoyed this week’s installment of Throwback Sundays, in which we discussed and shared six timepieces that a budding collector should look out for.

So, what are some of the watches that you have owned, when you first started your horological journey? Well, for the writer personally, the first “serious” timepiece was a Rolex Submariner. It was a no-nonsense timepiece that is very robust, and yet versatile enough for many different sort of occasions. And to top it off, the Submariner is indeed a very handsome and masculine timepiece.

Anyways, do share with us your thoughts, as well as some of the pieces that you think deserve a place in the list above. Till the next article, ciao!